There must be something in the air on the outer rings of the Republican Party. Ben Carson and Carly Fiorina both chose Monday to announce they are running for president, even though neither has ever won a state or federal election. Carson (unlike Fiorina) is relatively popular among Republicans. With a +28 percent net favorability rating, Carson is in the neighborhood of Jeb Bush and Ted Cruz (and far above Chris Christie).

But once you look at the fundamentals of his candidacy, his similarity with Fiorina becomes more clear. Both have a better chance of being re-hired (or hired in the case of Carson) to run Hewlett-Packard than winning the Republican nomination for president in 2016. Every indicator of primary success is against them.

Parties like to pick candidates with significant electoral victories under their belt. Carson really only entered the political scene in February 2013 with a speech at the National Prayer Breakfast. Fiorina is a business leader; she doesn’t have a long history of activism in the Republican Party. And business leaders already have a long-list of candidates to choose from, including Jeb Bush, Marco Rubio and Scott Walker.

No major party has nominated a candidate for president who wasn’t a governor, senator or vice-president since the majority of delegates were chosen through primaries and caucuses beginning in the early 1970s. Of the 14 men who weren’t president when they were nominated, the median time spent as a governor or in federal office was 12 years by the time they would have become president. In other words, they hadn’t just been elected; most had been elected more than once.

Fiorina’s one electoral attempt ended with a 10 percentage point loss in the 2010 California Senate race, a year when Republicans romped almost everywhere else.

Carson hasn’t even run for office before, and he hasn’t shown a particular aptness for it so far. He’s already made many — to put it kindly — impolitic remarks. He said prisoners prove being gay is a choice. He called President Obama a psychopath. He had no clue what the Knesset was — a big no-no in a very pro-Israel party. Carson said a measles outbreak was the fault of people who immigrated to the United States illegally. He has also made bizarre statements regarding police protests and plumbers. And Carson has managed to make all of these thoughts public just so far in 2015. Imagine what he might say in the remaining eight months of the year?

Office experience is also important because it connects you with people in the party. You build contacts that help you pick up support in the all-important endorsement primary. The three nominees (Jimmy Carter, Barack Obama and Mitt Romney) with the least amount of gubernatorial or federal office experience in the modern era had other things going for them with party officials and activists. Carter was the Democratic National Committee’s campaign committee chairman for the 1974 elections. Obama gave what was arguably the most well-known speech in modern national convention history. Romney, when he won the GOP nomination in 2012, had already run for the White House once and had served as the Republican Governors Association chairman for the 2006 elections.

The non-elected officials who have been most successful in past primaries had a built-in base within their party. Jesse Jackson, who had a history of activist work in the black community and was the most serious black candidate for president to date, was able to win over African-American voters in 1984 and 1988. Pat Robertson’s work as a television evangelist helped him with born-again Christian and evangelical voters. Pat Buchanan did well among white working-class voters because of his run in 1992 as the sole challenger to George H.W. Bush, and it helped that Buchanan was a rare voice for paleoconservatism.

Neither Carson nor Fiorina has this experience. Fiorina is the only woman in the Republican field, could that help her find a foothold? Unlike African-Americans, women make up a sizeable minority of the Republican electorate: They were 43 percent of voters in the 2012 Iowa Republican caucus, and 46 percent in the New Hampshire primary. That didn’t help Michele Bachmann, however, the only woman in the 2012 field, who won just 5 percent of the women’s votes in Iowa. And while Fiorina has argued that her gender could enhance her electability by neutralizing Hillary Clinton from “play[ing] the gender card” next November, it’s not clear it would Fiorina win over female voters; in her Senate race in California in 2010, Fiorina won only 39 percent of the female vote against Democrat Barbara Boxer.

Perhaps we could dismiss the fundamentals if the polling looked different. It doesn’t. After peaking at around 9 percent nationally earlier this year, Carson is down to 5 percent now. In Iowa, he’s down to a personal low of 7 percent. He’s sitting at just 5 percent in New Hampshire. Fiorina is currently dead last nationally of the 14 candidates tracked by Huffington Post Pollster. She is also dead last in Iowa. The only “good” news for her is that she is in ninth place, with 3 percent, in New Hampshire. When your best is ninth, though, you have some problems.

The underlying (non horse-race) polling paints a similar picture for both of these long-shots. The only live interview poll of Fiorina’s popularity, conducted by Monmouth University, has her favorable rating at just 18 percent and unfavorable rating at 20 percent, which means she has a net favorability rating of -2. That puts her in 13th place behind John Bolton.

Carson’s positive net-favorability rating doesn’t tell the whole the story. Liking someone and wanting him or her to be president are two different things. There is some evidence that fewer Republicans are would “consider voting” for Carson for the GOP nomination. According to CBS News polls conducted in February and late March, Carson was the only Republican to see a drop outside the margin of error in the percentage of Republican voters who said they would consider voting for him. From CBS: 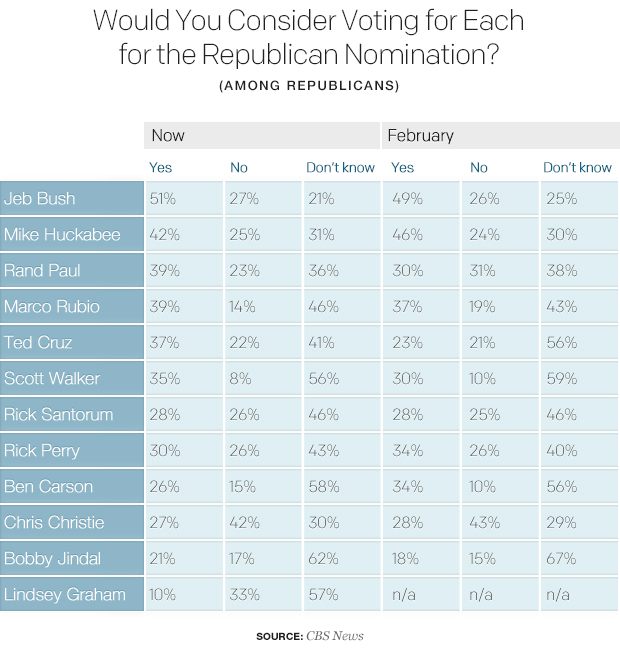 Carson still has a lot of people who are unsure about him, so his low “consider voting for” percentage isn’t as bad as Chris Christie’s. Carson could improve his position. Although, Republicans who know Carson now, know him from positive advertisements. As his campaign gets covered more, don’t be surprised if most people unsure about Carson now come out against him.

Put it all together, and the Carson and Fiorina candidacies don’t look like they will have the juice to go very far. It’s always possible that one of them will win a caucus or primary along the way. Carson still has a good organization in Iowa, and Fiorina has gotten strong reviews for her retail campaigning in New Hampshire. Still, they seem mostly to be vanity candidates.

CORRECTION (May 4, 5:21 p.m.): A previous version of this article incorrectly said John Bolton’s Facebook page had not been updated in three years. Bolton has created a second Facebook page, which has been updated as recently as May 1.