Donald Trump is making noise about an independent bid for president. If the Republican National Committee doesn’t treat him fairly, Trump says, he’ll be more likely to launch a third-party run. I don’t know if he is at all serious, but I do know two things: History suggests that an independent Trump campaign would crash and fail; polling suggests that even if that happened, Trump could take the Republican candidate down with him.

Trump received 20 percent of the vote in a hypothetical matchup against Democrat Hillary Clinton and Republican Jeb Bush in a newly released ABC News/Washington Post poll. But, if Trump were to run as an independent, his support would likely fade. Since the first Gallup poll in 1936, there have been five independent or third-party campaigns in which a candidate received at least 5 percent of the vote in early polls. All but George Wallace in 1968 ended up with a lower percentage of the vote than they initially garnered, according to Gallup surveys.

In fact, both Ross Perot in 1992 and George Wallace in 1968 faded more down the stretch than these numbers suggest. Perot polled at an amazingly high 39 percent in summer 1992 (that was before he dropped out and then re-entered the race). Wallace reached the low 20s in late September 1968 and then dropped steadily as Election Day approached.

Still, third-party candidates who poll well early don’t drop off the map completely. Even John Anderson, whose campaign pretty much collapsed, got more than 5 percent of the vote in 1980. That should be somewhat worrisome to Republicans because Trump would pull most of his support from the GOP standard bearer. In that ABC News/Washington Post survey, Bush dropped from 44 percent without Trump to 30 percent with him; Clinton fell only 4 percentage points (50 percent to 46). That’s a tremendous effect for a third-party candidate.

The outcome of almost every recent presidential election with a major third-party candidacy would have remained the same without that candidate, according to pre-election and exit poll data. (Because we don’t have polling data on how Henry Wallace — or Strom Thurmond — supporters would have split their vote in 1948, I included the 2000 election in this table instead.)

Only Wallace’s bid in 1968 really upended the popular vote. Even Ralph Nader’s bid in 2000 barely moved the needle because a number of his voters would have backed George W. Bush if Nader weren’t in the race.

Trump, on the other hand, could make a difference even if he experienced an Anderson-like slide to only 5 percent of the vote. If 70 percent of Trump’s vote comes from the Republican candidate (as it does in the ABC News/Post survey), we can estimate that the Democratic nominee’s chance of winning1 would rise from 50 percent (FiveThirtyEight’s default in a non-incumbent election) to 63 percent.

Of course, a Trump bid could earn more or less than 5 percent of the vote, and it could pull more or less support from either Democrats or Republicans than Trump is right now. So let’s look at different scenarios. Here’s a matrix that gives the Democratic candidate’s chance of winning at this point depending on varying levels of support for Trump. 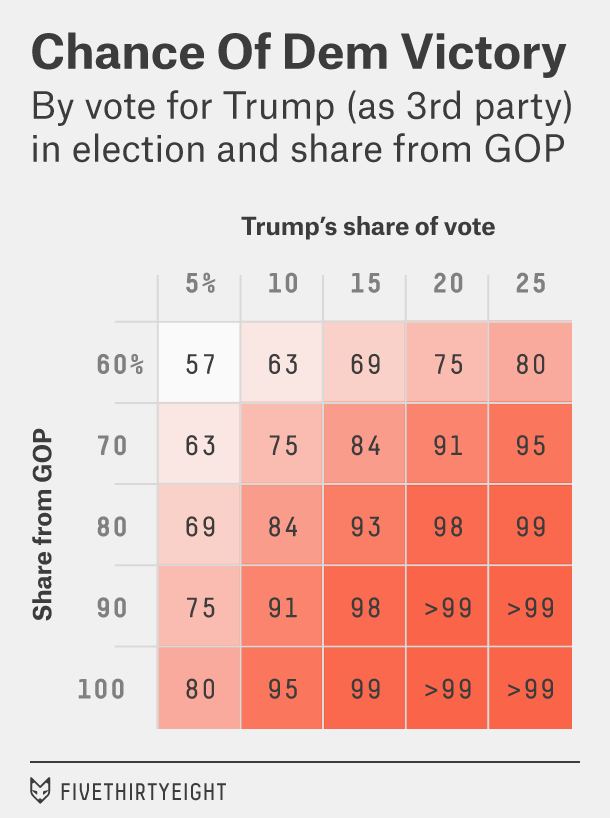 In the best case for Republicans, Trump shifts the chances only slightly in the Democratic direction, to just less than 60 percent. At worst, Trumps puts Clinton in the White House.

If Trump does run as an independent, The Donald nightmare may just be beginning for the GOP.

Check out the 2016 Endorsement Primary.