A few weeks ago, I wrote about research suggesting that cereal-box cartoon characters are drawn to make eye contact with children in the grocery-store aisle. Well, General Mills, the company that produces — among others — Cheerios, Cinnamon Toast Crunch, Lucky Charms and Trix, found the study by Cornell University Food and Brand Lab “absurd.”

Like us, General Mills was interested in doing its own research to test the claim. The company wrote on its blog:

We searched “Trix Cereal Box” in Google images. Go ahead. I suggest you do your own search. You’ll see more variations than these researchers apparently did. You’ll see that the Trix Rabbit looks in pretty much every direction. Up. Left. Right. Straight ahead. He even has his eyes closed on a couple.

When I was writing the post though, I searched on Google for the same thing. This is what I found (you can do the same by clicking here).

Sure, there’s some variation, but I didn’t think there was enough to brand the study — which looked at a total of 86 characters on 65 cereal boxes — “absurd.”

Attempting to prove its point, General Mills published an image on its blog of the Trix rabbit looking up. 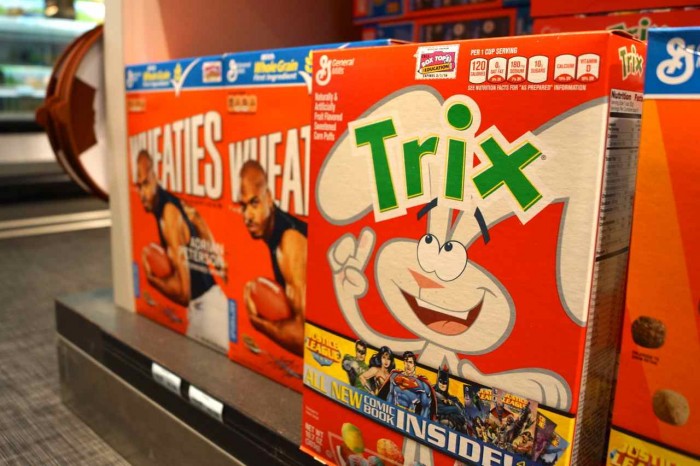 But the image General Mills chose to prove its point shows a box on a bottom shelf, so the rabbit would still be making eye contact with children (although manufacturers won’t always know which shelf their product will be on).

He does look down on occasion, but do you notice what he seems to be looking at? That’s right – AT THE BOWL OF CEREAL PICTURED ON THE BOX. Because he loves Trix. I think that’s been well established.

That’s a fair point, and one that commenters raised underneath our post. Although, there is no rule that says the cereal bowl must be on the bottom of the box.

Finally, General Mills highlighted that the study found that shelves with children’s cereal boxes on them were on average 20 inches off the ground and noted:

Unless mom is dragging the kid on the floor. Or the kid is duck-walking. An average four-year old is about 40 inches tall. A supposedly downward gazing character would be looking at what exactly? The kid’s belt?

That’s true, but the company’s missed three pieces of the equation: 1) A child (or adult for that matter) doesn’t have eyes on top of his or her head; they’re a few inches below. 2) The character will be higher off the ground than the shelf its box sits on. 3) Most children don’t stand nose to nose with products. The study claimed that a person stands an average of 4 feet back, which also affects the angle of a gaze.

Whether the researchers or General Mills are right, a lot of children’s cereals feature characters looking down, as my colleague Allison McCann and I showed in the original post: