You might have wondered about how eye contact affects the mother-infant relationship, how it affects the ability to persuade, or even if it encourages men in bars. But you might not have thought much about the eye contact of cereal-box cartoon characters. Don’t fret: A new study investigated precisely that. The Trix rabbit is looking children in the eye and, as a result, increasing trust in the brand.

That’s a potentially important finding because cereal is the second most advertised food to children (after fast food). In 2006, cereal manufacturers spent $229 million on promotions targeting kids 2 to 11 years old, more than any other packaged-food manufacturer.

But how did the study measure the impact of cartoons’ eye-contact? And do the findings bear out for America’s top-selling cereals? 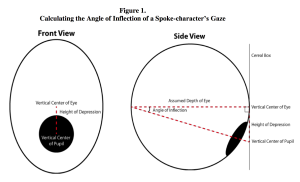 In the first part of the study — which looked at 86 cereal “spokes-characters” on boxes in 10 grocery stores in the Eastern U.S. — researchers from the Cornell University Food and Brand Lab measured the angle of the characters’ gaze. The study’s authors “assumed that their eyeballs were three-dimensional and spherical,” then calculated the average height of that character on the supermarket shelf (see Figures 1 and 2, taken from the paper).

Of the 86 characters that appeared on 65 boxes, the researchers noted that 57 were looking downward (they found that these cereals tended to be placed on middle shelves. So looking downward means looking at children). 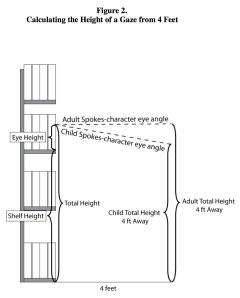 Then, the researchers tested whether eye contact increased positive feelings toward the brand. They digitally altered a box of Trix and asked 63 university students to rate it (see the image at the top of this post; the original is at top left).

When the researchers compared the responses against control cereal boxes on which characters weren’t looking downward, they found that eye contact increased attention to, trust in and connection with the brand. When participants were asked to choose between Trix and Fruity Pebbles, they were more likely to choose Trix when the character on the box, a rabbit, was looking down at them.

Knowing this, we looked at the 10 best-selling cereals in the U.S. We checked whether they were marketed at children and whether the packaging had a character looking downward.

Perhaps not surprisingly, the top children’s cereals all feature a character with a downward gaze.