A vast amount of column space was spent this week debating whether Tom Brady had finally ascended to No. 1 in the all-time pantheon of quarterbacking greatness. (Many of the articles argued that, yes, Brady is now the best ever.)

These assessments leaned heavily on the fact that Brady is tied with Joe Montana and Terry Bradshaw for the most Super Bowl victories of any quarterback. But even Patriots fans have to acknowledge that “count the rings” isn’t the most nuanced argument in the world. So, what do the numbers say about Brady’s legacy?

The common narrative is that early-career Brady wasn’t a statistical monster, to the point that his playoff wins over Peyton Manning in 2003 and 2004 were held up as victories for clutch, gritty winners everywhere. But the truth is that, in addition to his gaudy record as a postseason starter, Brady was one of the league’s top five to 10 regular-season quarterbacks statistically even before his transformation into a passing efficiency god in 2007.

In other words, the “clutch game manager” phase of Brady’s career was never as game manager-y as his detractors made it out to be. And ever since, he’s been as efficient a regular-season QB as any in NFL history.

To measure QB performance, I used Chase Stuart’s formula for passing value, which compares a quarterback’s adjusted net yards per attempt (ANY/A) to the league average after adjusting for home-field advantage, weather effects and strength of schedule. By that metric, the late-career version of Brady owns practically every stretch of the best consecutive peak passing regular seasons in the Super Bowl era: 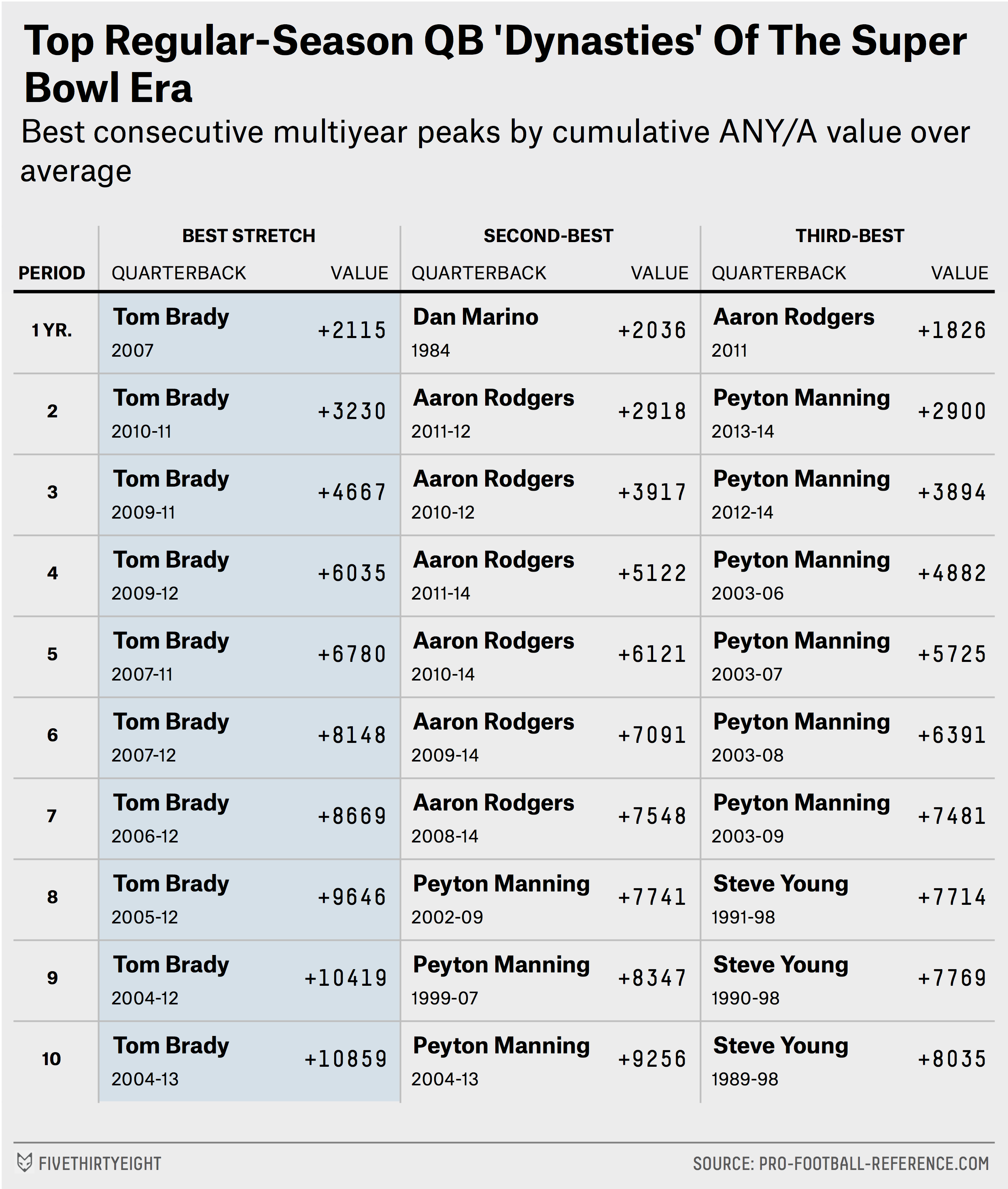 Now, some of that is due to sheer passing volume; while shorter schedules have been prorated to 16 games, today’s passers drop back so much more often per game than their predecessors did that they have more chances to add value. Even so, Brady’s stats have risen far above those of his peers (including Manning) during the peak of his career once all the aforementioned adjustments are made.

In terms of total career regular season value, however, Brady does not rank No. 1 among Super Bowl era quarterbacks — his 11,921 adjusted yards of value over average ranks second to Manning’s 13,791-yard mark: 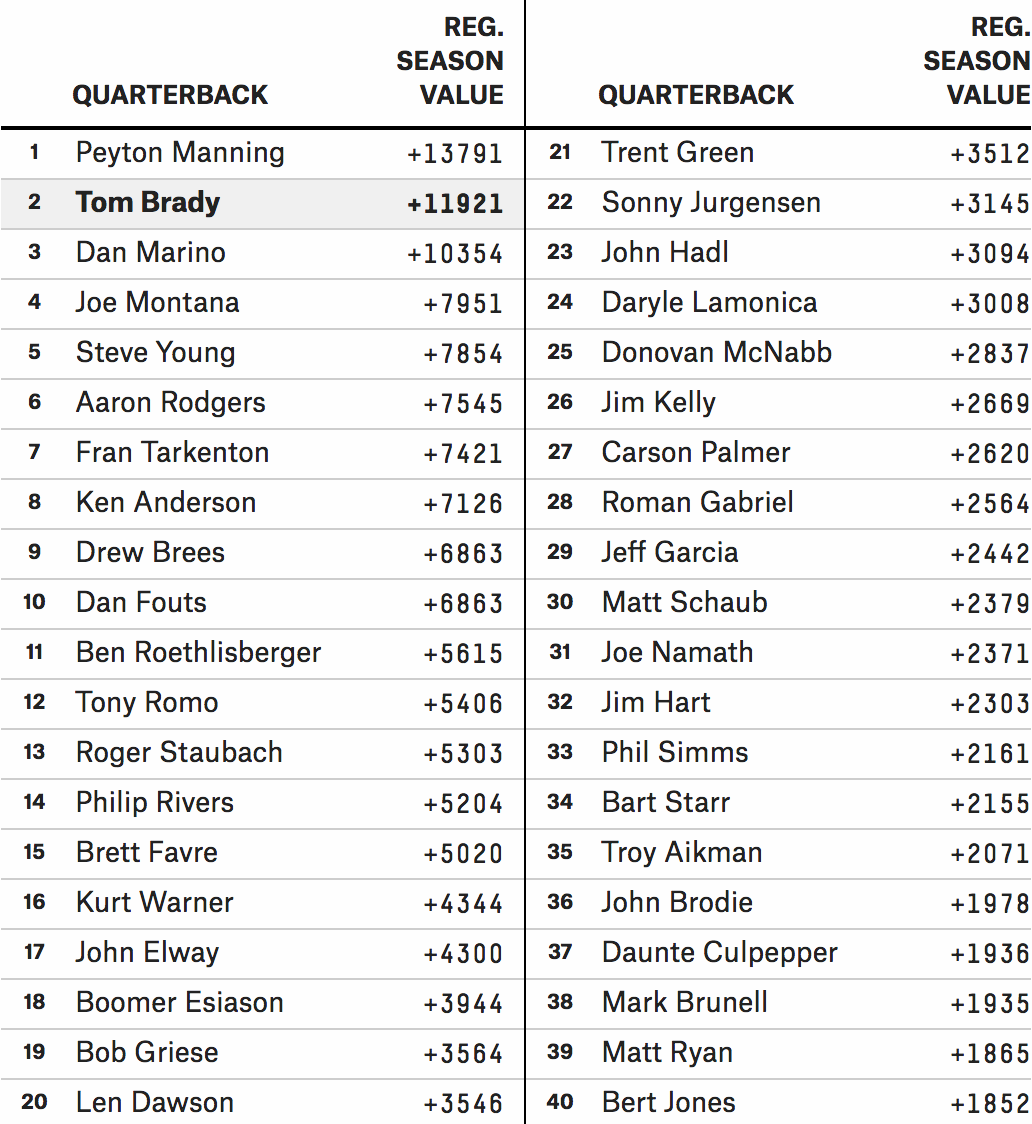 Of course, any good ranking of quarterbacks should also give credit for performance in the playoffs, and Brady’s trump card over Manning has always been the postseason. But here’s where the twist comes in: After crediting playoff passing value over average (according to the same formula described above) with weight given to each game according to how much it changes a team’s probability of winning the Super Bowl relative to the average regular season game — a form of leverage index for the importance of football games — Brady passes Manning but is surpassed by two others: Joe Montana and our old friend Kurt Warner: 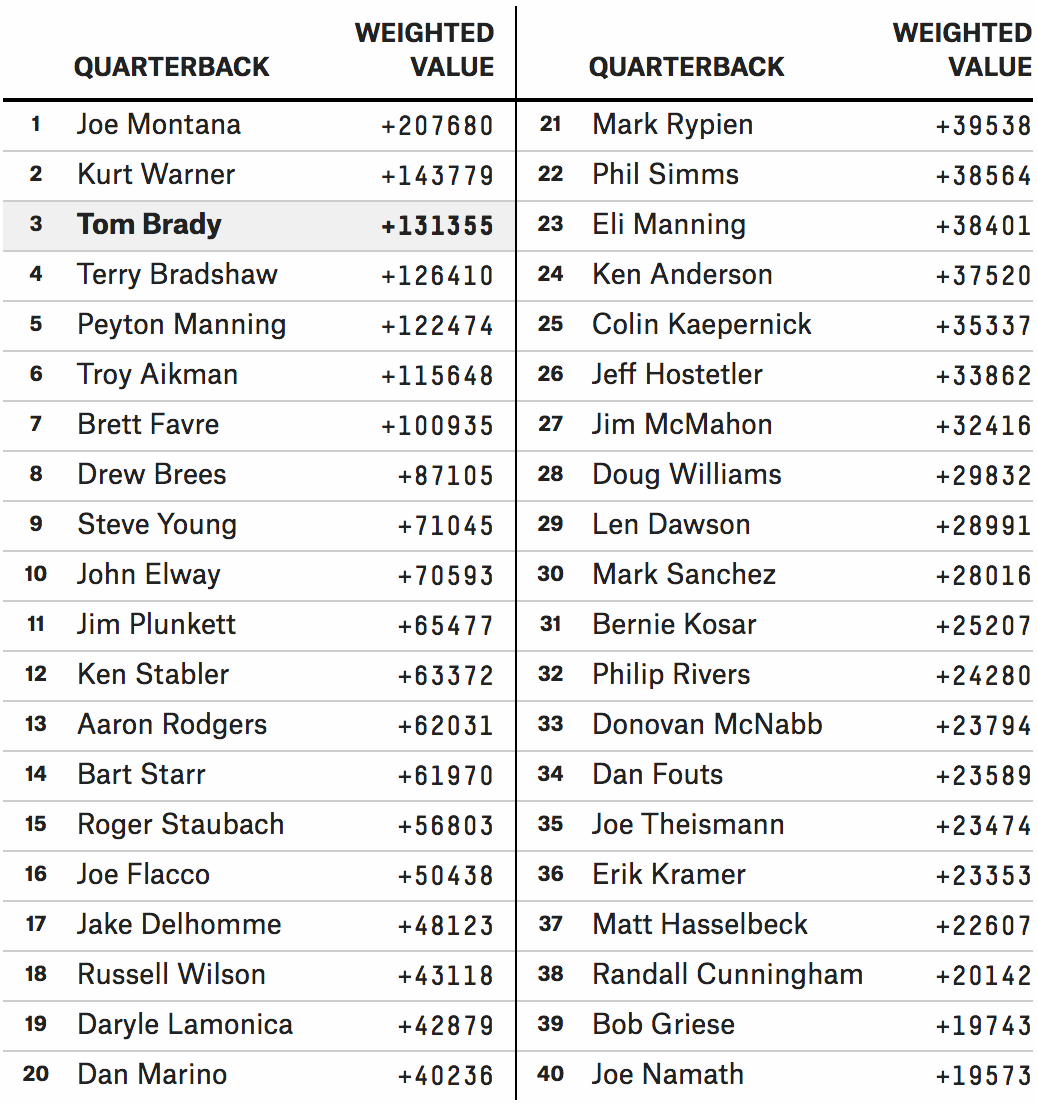 Why? Under the leverage-weighted scheme, playoff games are given an incredible amount of emphasis. Wild card games are worth about 26 times as much as the average regular season game; that multiplier becomes 51 for the divisional round, 102 for the conference championship games and a whopping 205 for the Super Bowl (you can read more about this math at the end of the post).

Because of the extreme weighting given to playoff games, Brady loses ground to Montana, whose three best Super Bowls were each at least 47 adjusted yards of value better than any of Brady’s Super Bowls. (Montana’s worst Super Bowl was also better than three of Brady’s Super Bowls.) Warner also gets a massive boost from his Super Bowl performances in 2000 and 2009 — the latter of which ranks as the single-best passing game of the Super Bowl era after adjusting for the strength of opponent and the leverage of the game — in addition to big games at lower rungs of the playoff ladder. Adding in the postseason hurts Brady.

So, is Brady the best all of time? At his regular-season peak, he might very well be. And if he has a few more great seasons, he could pass Manning on career value over average. But for now, Montana reigns supreme among Super Bowl-era QBs when playoff performance is included in the calculations.

Here’s how the math works out: The average regular-season game moves a team’s chances of winning the Super Bowl by about 0.24 percentage points. That’s because every team starts out with a 1 in 32 chance of winning it all, which inevitably moves to either zero (for the 20 teams who miss the playoffs) or 1 in 12 ( for playoff teams) once all 16 games are played. Meanwhile, the Super Bowl swings each team’s chances by 50 percent — either up from 50-50 to 100 percent, or down to zero.