Tim Duncan turns 38 on Friday. On Saturday, he’ll resume his quest for a fifth NBA championship when the San Antonio Spurs travel to Dallas to face the Mavericks in the third game of their first-round playoff series. Duncan is still an extremely effective player, in part because his masterful coach, Gregg Popovich, limits his minutes in the regular season. We might not have seen a career quite like his since Kareem Abdul-Jabbar.

Duncan has been a force since he entered the league at 21. In his debut season, 1997-98, he won the Rookie of the Year award and made the All-NBA team. The next year he was named NBA Finals MVP and won his first championship.

I wondered which other players in the NBA, and in the other major team sports, have had so much impact over their full professional lives. In other words, which of them were both very effective as young players and as old players?

To study this for the NBA, I looked up the number of win shares each player has generated up to and including his age 24 season, and also from his age 33 season onward. (From this point forward, I’ll define an NBA player’s age-season by how old he was as of Feb. 1, as Basketball-Reference.com does.) Then I took the harmonic mean between the two figures. The harmonic mean differs from a regular average in that it tends toward the lower of a set of numbers. That will help us to identify players who were outstanding both when they were young and when they were old, as opposed to just one or the other.

It’s having accomplished both of these things in the same career that makes Duncan so extraordinary. The harmonic mean between his early-career and late-career win share totals is 43.7. That’s the third-highest figure ever in the NBA.

You can probably guess the two players who rank ahead of Duncan. One is Michael Jordan, who achieved this feat despite retiring for his age 35 through age 37 seasons. (Jordan came back to play seasons with the Washington Wizards at 38 and 39.) But the player who laps the field, and who in many ways was the predecessor to Duncan, is Kareem Abdul-Jabbar. 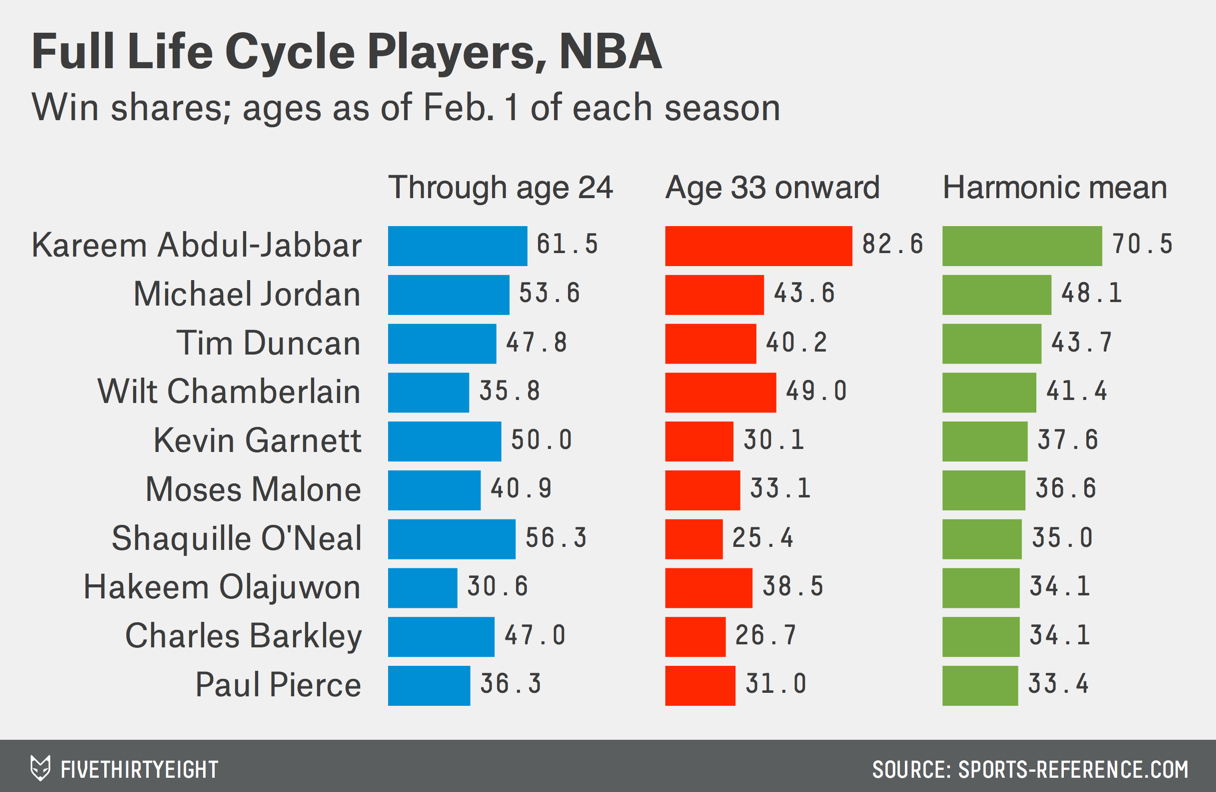 Abdul-Jabbar played into his 40s. By win shares, he was the third-best old player in NBA history, after Karl Malone and John Stockton.

Those of you who are my age might only remember Old Kareem and his skyhooks and might not know what a phenom he was when he entered the league as Lew Alcindor. Abdul-Jabbar/Alcindor was the sixth-most productive young player in NBA history — despite, like Duncan, playing out his full college career. In his rookie season with the Milwaukee Bucks, he averaged 28.8 points and 14.5 rebounds per game. Two years later, at 24, he averaged 34.8 and 16.6.

No player in the other major sports stands out so much from his competition. Babe Ruth is the top-ranking baseball player (counting his days as a pitcher and using wins above replacement; note that the systems we’re using for the various sports are not directly comparable to one another). Still, many of the all-time great baseball players have had extremely long careers. Ty Cobb ranks second and isn’t all that far behind Ruth. 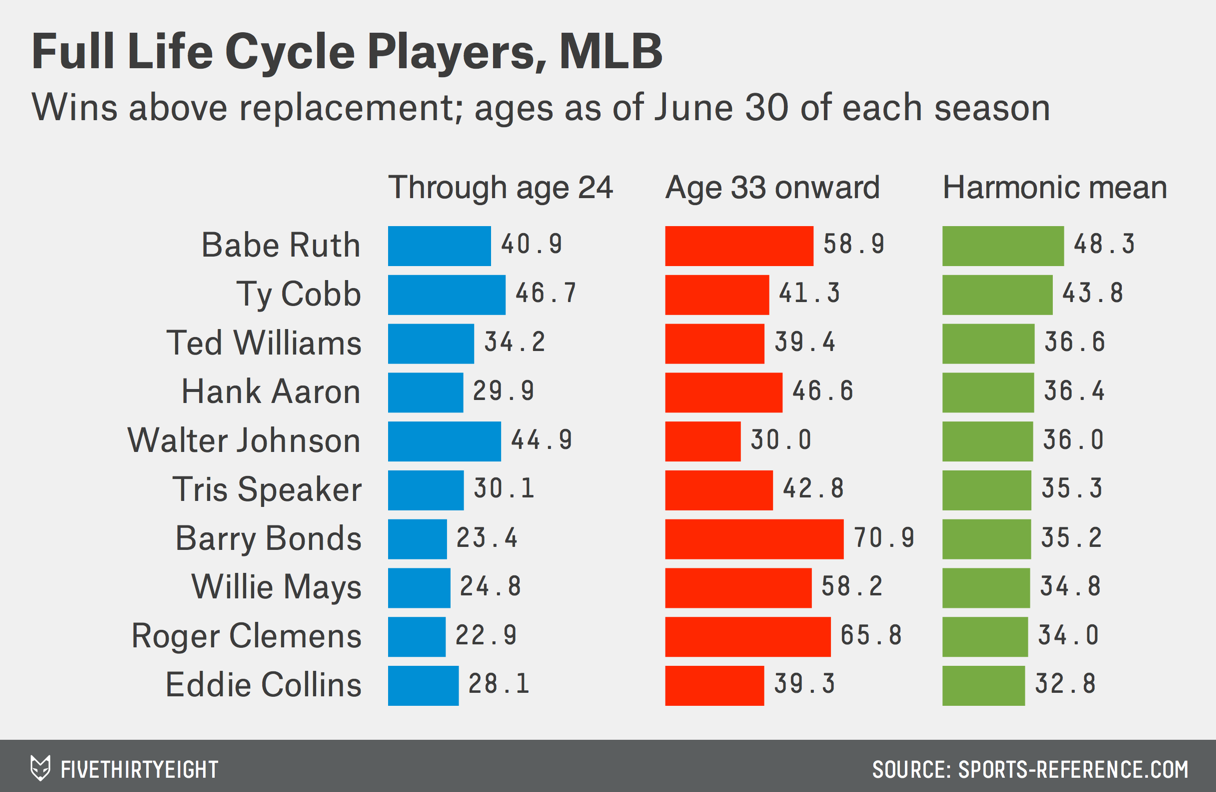 You might assume that the top NHL player by this standard absolutely must be Wayne Gretzky, or if not Gretzky then Gordie Howe. But it’s Ray Bourque. Gretzky was the best young player in NHL history by leaps and bounds, and Howe was the most productive old one. But Bourque had the best balance over his career, and he comes out slightly better when you take the harmonic mean of his point shares. I’m not sure that I totally buy that ranking — hockey analytics are behind those in baseball and basketball. But Gretzky was a somewhat specialized player late in his career. He notched tons of assists, but never ranked in the top 10 in goals in the NHL after his age 28 season, and he was limited defensively, with a -93 plus-minus from his age 33 season onward. 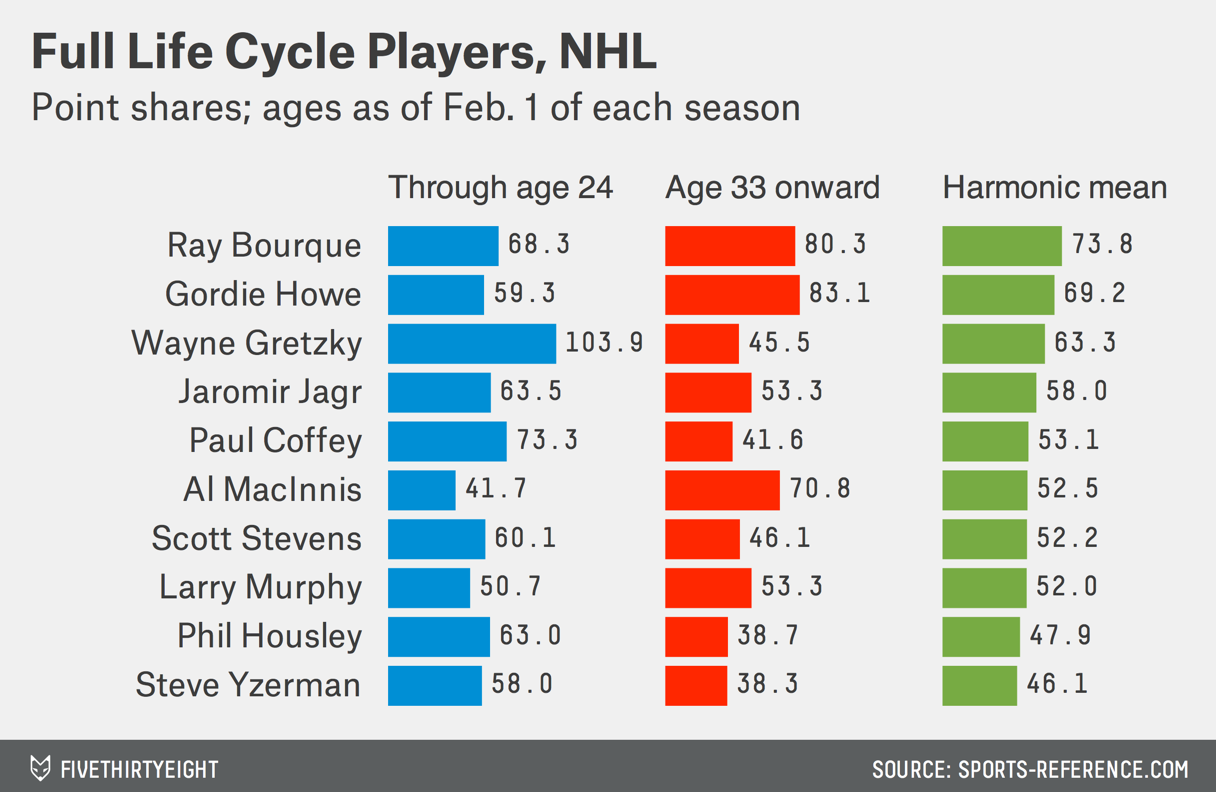 Last is the NFL, which is the least interesting of the leagues to evaluate in this way. That’s because NFL careers start late due to the league’s strictly enforced age limit and end early because of the wear and tear on the players. And it’s hard to measure what goes on in between and to compare players at different positions.

Still, according to Sports-Reference.com’s approximate value system, the closest thing the NFL has had to a player for all seasons is Fran Tarkenton. As a rookie, at age 21, Tarkenton was the principal quarterback for the expansion Minnesota Vikings. By 24, he led the Vikings to their first winning season, in 1964, and made his first Pro Bowl. After a stint with the New York Giants, he returned to Minnesota, and won an MVP award at age 35 and led the NFL in passing yards in his final season at age 38. Dan Marino, Ray Lewis and Peyton Manning rank next after Tarkenton. (Note that approximate value figures are incomplete for the 2013 season; I had to make an educated guess for how Charles Woodson and Tony Gonzalez performed last year according to the system.) 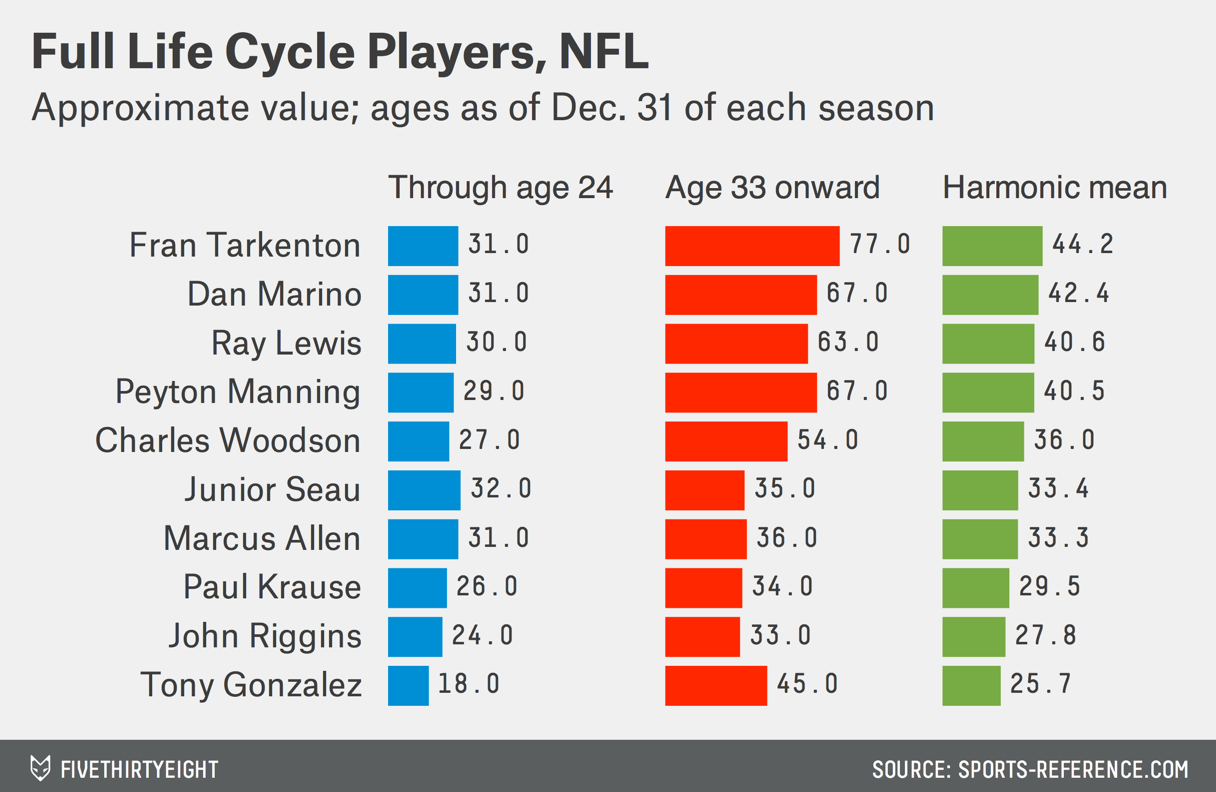 Manning could take over the top slot with one or two more good seasons. It seems like he should be ahead already. Approximate value is … approximate. And like the other measures, it doesn’t account for the post-season. I have trouble ranking Peyton Manning behind Fran Tarkenton in pretty much anything.

But I don’t have a problem with ranking Manning, or Duncan, behind Abdul-Jabbar, who won a national championship as a teenager at UCLA and an NBA title with the Los Angeles Lakers in his 40s. No player in American team sports has had a career quite like his.