Joe Posnanski had a fascinating piece at NBC Sports last week regarding comments made by Tiger Woods after Rory McIlroy’s British Open victory (the third major title for the 25-year-old). When asked for a reaction to McIlroy’s win — and his championship-winning form of recent years — Woods said:

Well, as you can see, the way he plays is pretty aggressively. When he gets it going, he gets it going. When it gets going bad, it gets going real bad. It’s one or the other. If you look at his results, he’s kind of that way. Very similar to what Phil [Mickelson] does. He has his hot weeks, and he has his weeks where he’s off. And that’s just the nature of how he plays the game – it’s no right way or wrong way.

Posnanski’s (likely correct) reading of the remarks is that Woods attributes a high-variance playing strategy to McIlroy, implying the young champion is willing to accept bad rounds in exchange for dazzling ones. (It’s hard not to also read between the lines of Woods’s comments; he seems to be contrasting McIlroy’s bargain with variance against his own brand of consistent brilliance when he was at his peak.)

It seems obvious that some golfers are inconsistent and some are steady. (Padraig Harrington made the same comparison between the supposed streakiness of McIlroy and Mickelson last summer.) But as we’ve seen in other sports, such as basketball, the human mind is wired to find patterns and attribute significance to sequences that often turn out to be totally random. So, is Woods’s perception of McIlroy off-base?

At first glance, Woods seems right. If we look at the standard deviation of round-by-round major-tournament scores (relative to the field average) for players who have won multiple majors since 1958 (looking only at the years between their first and last major), McIlroy tops the list as the least consistent: 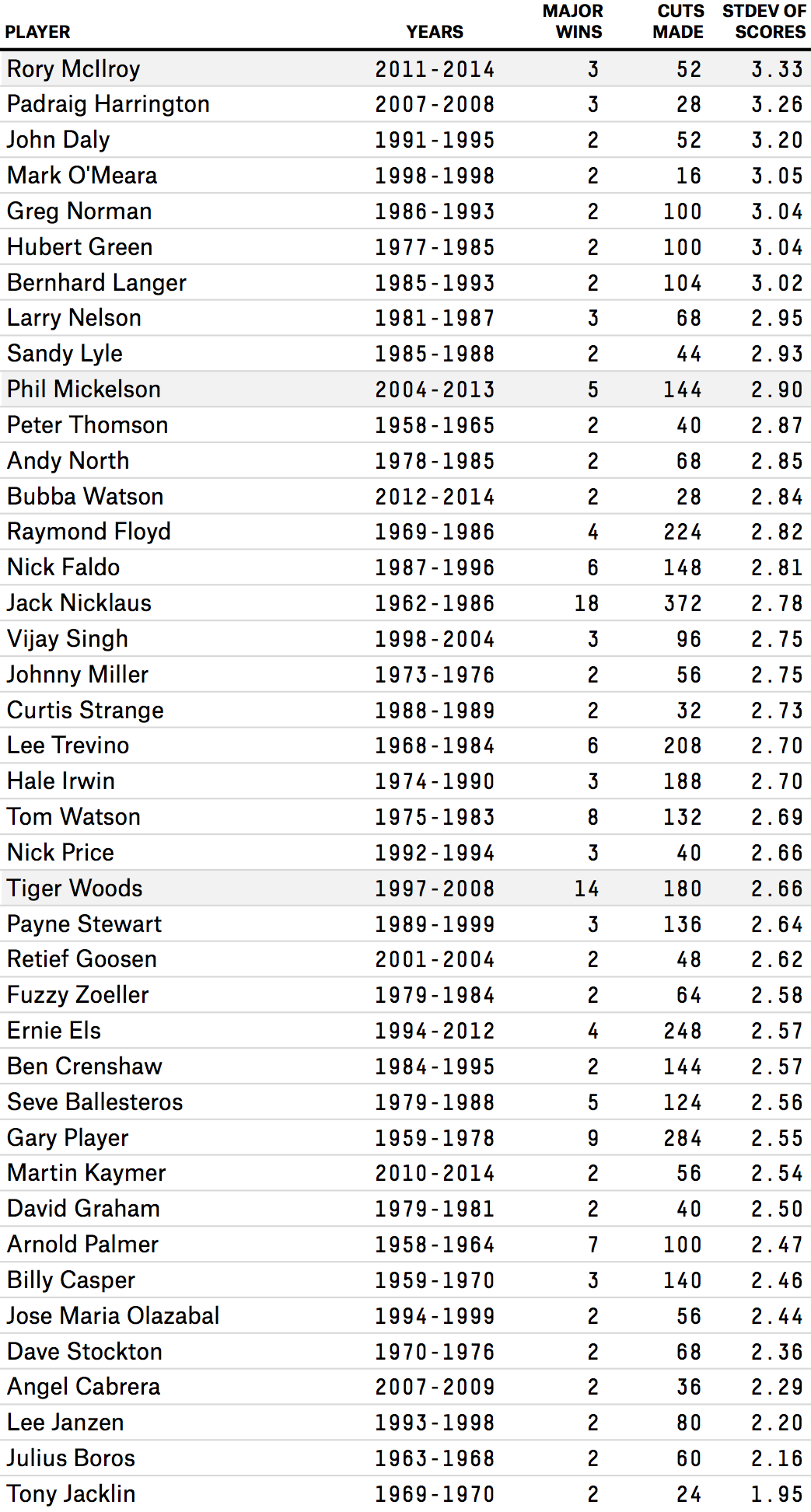 There’s also a rhyme and reason to the list based on Woods’s reasoning. In addition to McIlroy ranking first (and, coincidentally, Harrington ranking second), John Daly — known primarily as a volatile, undisciplined long bomber — sits third. And, limiting the data to multi-major winners since 1980, a regression between the most common PGA Tour skill statistics (driving distance and accuracy, greens in regulation percentage, putts per round and sand save percentage, all relative to the tour average) reveals a statistically significant relationship between increased driving power and round-to-round inconsistency in majors, which jibes with Woods’s argument.

But if Woods is on to something, then we would expect to find some consistency to a player’s, well, consistency. A pattern of wild round-to-round scoring swings should persist across a player’s whole career. But if we split players’ careers into random groups (I used even and odd years), the correlation between their round-by-round scoring standard deviation in one group of years and the other is just 0.15. That’s low, meaning even though a player like McIlroy has appeared quite streaky in majors so far, we should only expect him to be slightly less consistent than average going forward.

The rest of the supposed streakiness Woods saw in McIlroy is probably just the product of randomness and not intrinsic to his game.