Glance at the top of Ken Pomeroy’s adjusted efficiency rankings,1 and the 2019-20 men’s college basketball season might not seem so weird. Kansas at No. 1? That’s not new. Gonzaga second? We’ve seen it before. Duke is No. 5, Michigan State is No. 7, Ohio State is No. 8 and Louisville is No. 9. Seems normal enough!

Stare at them longer, though, and it’s clear that something is different about this year’s top teams. The top 10 is rounded out by Baylor, San Diego State, Dayton and Maryland — four schools that previously appeared in the top 10 of Pomeroy’s final pre-tourney rankings a grand total of six times between them. A little further down, you’ll find Houston, Seton Hall and Penn State, which practically never rank this high either. All told, six of Pomeroy’s top 20 teams (through Monday) were ranked higher than they’ve ever been since his ratings began in 2001-02, and five more are having either their second- or third-highest-ranked season in that span.

On the one hand, it’s been nice to see some fresh faces at the top of the college basketball pecking order. But it could also mean trouble for those newfound favorites once the tournament begins. Plenty of research indicates that markers of preseason prestige, such as the Associated Press Top 25 poll, carry extra predictive value for the tournament even after accounting for a team’s performance during the season itself.

This year might prove an especially interesting laboratory for the theory that preseason polls still matter by season’s end. Among current members of the Top 25, 11 of them — Dayton, San Diego State, Florida State, Creighton, BYU, Iowa, Penn State, Houston, Illinois, Wisconsin and Michigan — entered this season unranked. Historically speaking, those teams tend to win fewer tourney games than we would expect based on where they were seeded — and not by a small amount, either. Although we don’t necessarily know what will happen in an NCAA Tournament so overloaded with teams climbing up from obscurity, it’s a factor that could add even more madness to the usual March spectacle.

Also piling onto the potential chaos — and perhaps feeding the rise of this year’s less-heralded contenders, too — has been the relative weakness of the top teams. With a KenPom adjusted efficiency margin of 30.8, Kansas could be one of the weakest statistical No. 1s going into an NCAA Tournament since 2002. But the Jayhawks are just the tip of the iceberg. At every slot among Pomeroy’s Top 25, the 2019-20 team occupying that rank rates lower than the pre-tournament average over the previous 18 seasons: 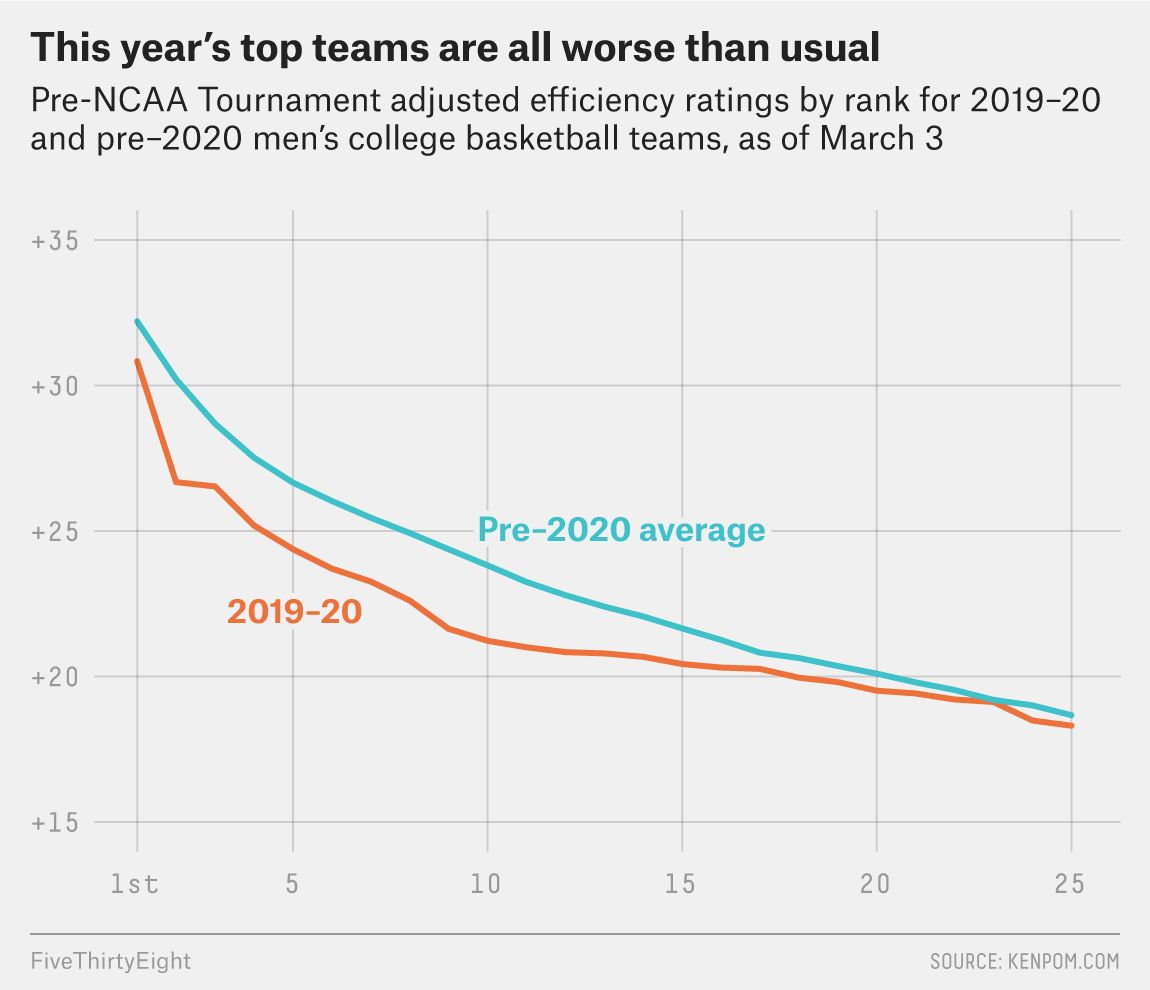 Combine a bunch of weaker-than-usual top teams with a good number of them also lacking any preseason hype, and we could have the perfect recipe for one of the wackiest men’s tournaments in recent memory. Maybe that means we’ll see another low seed make the Final Four, or maybe it means that one of the more anonymous teams on track for a high seed manages to become both a favorite and a Cinderella at the same time. Either way, one thing is for sure: College basketball is going to get pretty weird starting in a couple of weeks.