The New York Times’ Paul Krugman, assessing the presidential candidacy of Rand Paul, asserts that there aren’t very many libertarians in the United States. Most Americans, Krugman says, take clearly “liberal” or “conservative” positions on both economic and social issues. Here’s the graphic Krugman drew to represent his claim:

It’s correct to say that few Americans identify as libertarian. Only 11 percent said the term “libertarian” describes them well, according to a 2014 Pew Research poll.

But how people label themselves is one thing. Americans sometimes leave a different impression when polled about specific issues. Often, their views are reasonably heterodox and not well represented by a one-dimensional political spectrum.

Take two issues that are taken as emblematic of the split between liberal and conservative viewpoints: gay marriage and income inequality. If Krugman is right, you should see few Americans who are in favor of same-sex marriage but oppose government efforts to reduce income inequality, or vice versa.

As it turns out, however, there are quite a number of them; about 4 in 10 Americans have “inconsistent” views on these issues. The General Social Survey asks Americans whether they favor or oppose gay marriage. It also asks them to rate, on a 7-point scale, whether the government ought to reduce income differences through higher taxes on the rich and income assistance to the poor.1 Here’s how Americans’ responses lined up in the poll in 2010 and 2012: 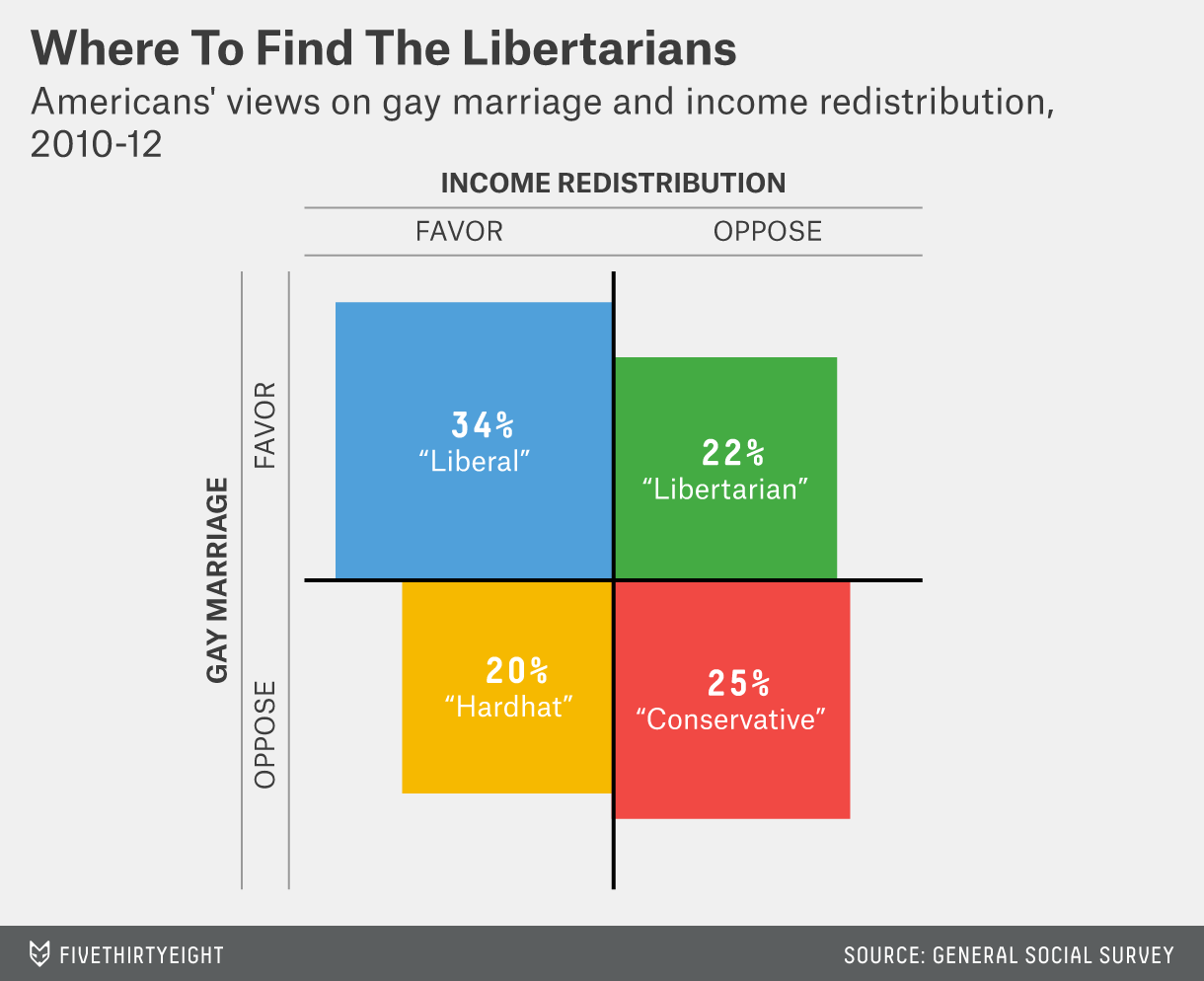 The most popular position (34 percent) is to favor both gay marriage and income redistribution. But 22 percent of Americans are in favor of gay marriage and opposed to government efforts to redistribute income. Another 20 percent are opposed to gay marriage, but favor income redistribution. There’s some relationship in the responses to these issues — but not much. They’re far closer to being randomly distributed (25 percent of voters in each quadrant) than perfectly correlated. (I’ve thrown out responses that were neutral on one or both issues so we get a two-by-two matrix that matches Krugman’s.)

So does that mean Paul has running room after all? No — we’re not that optimistic about his chances here at FiveThirtyEight. Part of that is because the hard-core partisans who vote in presidential primaries are much more likely to take consistently liberal or conservative positions than the broader American population, as Krugman’s colleague Nate Cohn points out.

And the parties themselves — who have disproportionate influence in the primaries — have highly partisan views by definition. Almost all voting in the U.S. Congress, on social issues and economic issues alike, can be reduced to a single, left-right dimension.

Does this make any sense? Why should views on (for example) gay marriage, taxation, and U.S. policy toward Iran have much of anything to do with one another?2 The answer is that it suits the Democratic Party and Republican Party’s mutual best interest to articulate clear and opposing positions on these issues and to present their platforms as being intellectually coherent. The two-party system can come under threat (as it potentially now is in the United Kingdom) when views on important issues cut across party lines.

That’s bad news for candidates like Rand Paul. Nonetheless, the rigidly partisan views of political elites should not be mistaken for the relatively malleable and diverse ones that American voters hold.