UPDATE (Feb. 13, 6:30 p.m.): Justice Antonin Scalia died on Saturday morning, leaving behind a legacy as one of the most influential conservatives in the history of the Supreme Court, as well as a vacancy to be filled. President Obama has just a few months left in his term to nominate a replacement, but faces an uphill battle for confirmation in the Republican-controlled Senate, where the majority leader, Mitch McConnell, has already said the decision must be left to the next president. After Republicans took control of the Senate in 2014, we looked at the possibility that Obama would be able to appoint another justice in his term and the increasing importance of ideology in the Supreme Court nomination process.

Democrats lost the Senate, but so what? President Obama still has two more years and a veto.

But there is at least one area where the GOP’s new Senate majority makes a big difference: a Supreme Court nomination. While it’s still unclear whether Obama will get to nominate another justice, the Republican gains in November make it unlikely a liberal nominee, such as Justice Thurgood Marshall, would be confirmed. And a nominee like the two Obama-appointed justices currently sitting on the court, Elena Kagan and Sonia Sotomayor, would face a possible filibuster.

We know this thanks to research spearheaded by Lee Epstein, a professor at Washington University in St. Louis, which measured what matters in gaining Senate confirmation. As I noted in September, ideology has become the single biggest factor — the ideology both of the nominee and of the senators. Qualifications are now a secondary consideration.1 They still matter (see Harriet Miers), but even the most qualified candidate picked from an ideological pole would face a slew of opposition.

We can expand Epstein et al’s work to all nominees from Robert Bork in 1987 to Kagan in 2010, giving us a model that factors in their qualifications and ideology, the senators’ party and ideology2 and the president’s approval rating, and predicts the likelihood of each senator voting for a given nominee.3 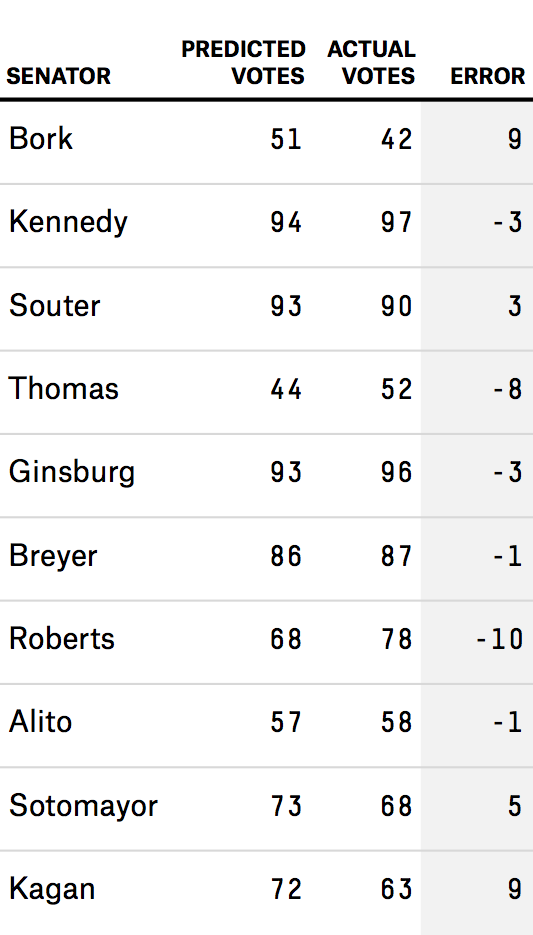 As you would expect, senators are more likely to vote for a nominee if the president has a higher approval rating and if the nominee is closer to them ideologically, is more qualified or is of the same party. The ideological variable is most important, but all are statistically significant at the .01 level.

Once we know how likely each senator is to vote for a potential justice, we can sum up the probabilities and work out the average number of votes a nominee will get. For past nominees, the model expected what’s in the table at left.4

We obviously don’t know whom Obama would nominate, so let’s use past nominees as stand-ins. I’ve assigned an ideological score and a qualification label to all the nominees since 19655: 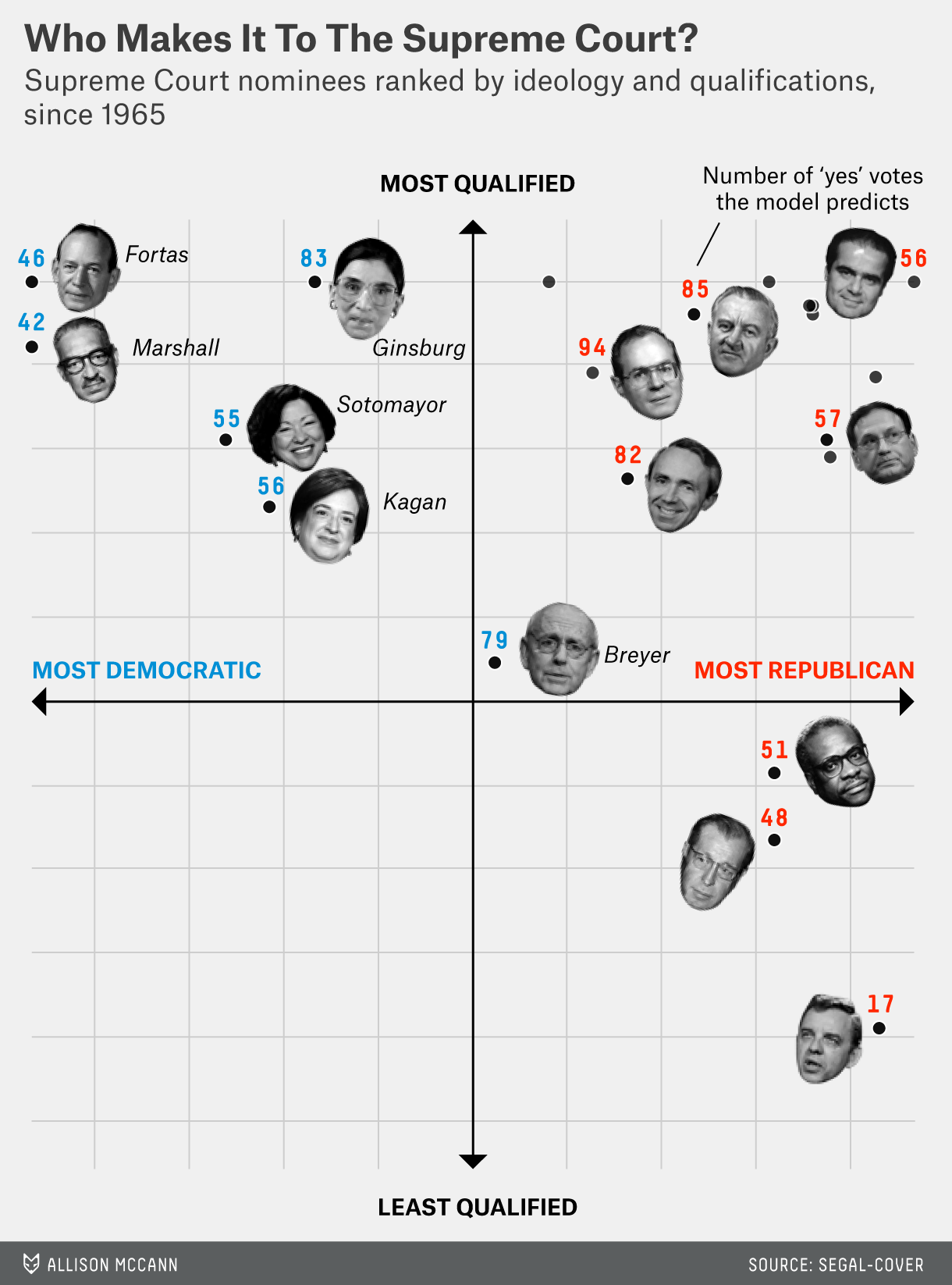 Obama isn’t likely to nominate a Clarence Thomas type, so let’s focus on the past six Democratic nominees who made it past cloture as our proxies:

Keeping Obama’s approval rating steady at 43 percent (or about what it is right now) and assuming that Republican Bill Cassidy wins the Senate runoff in Louisiana, here are the model’s vote estimates:

Republican gains in November have made confirming the Sotomayors and Kagans of the world considerably more difficult. More liberal nominees — even with perfect qualifications — don’t come close to getting the 60 votes needed to avoid a filibuster. That shouldn’t be surprising. Since Bork, there hasn’t been a single Supreme Court nominee from the ideological poles.6

But because of the results of the 2014 election, an average Democratic nominee would probably run into the filibuster. Democrats, led by Harry Reid, last year got rid of the filibuster for all district and appeals court nominees, but left it in place for Supreme Court nominations. The model suggests that a candidate who has average Democratic characteristics would fall just short of the 60 votes needed to avoid a filibuster and would have to pick up more Republican votes.

Who are these swing senators that might support an average Democratic nominee?

Obama could probably avoid any threat of a filibuster by choosing a middle-of-the-road nominee. The most moderate Democratic nominee of the past 50 years, Breyer, had middling qualifications but flew through the Senate. The model indicates that a moderate with even below-average qualifications would win over many Republicans.

But as I mentioned above, the model isn’t perfect. It’s also possible that with increasing polarization, the model underestimates Republican opposition to any Democratic nominee. Both Kagan and Sotomayor came in with lower vote totals than the model predicted. In addition, if a vacancy came near the end of Obama’s term, the temptation to stall could be too great for Republicans to resist. Professors Charles M. Cameron and Jonathan P. Kastellec of Princeton University and Jee-Kwang Park of American University have argued that interest-group pressure would keep most Republicans from voting for even a moderate nominee. They also insist that a nominee who would move the court ideologically — a liberal justice replacing a conservative justice, for example — would have a difficult time basically no matter what.

Either way, the 2014 Senate elections have made it more difficult for Obama to appoint a Supreme Court justice. If any future nominee looked like those he’s already appointed, he’d likely have a fight on his hands. His best chance would be to go with a nominee who is a true moderate, or an impeccably qualified, mainstream Democrat.