Justice Ruth Bader Ginsburg doesn’t want to step down from the Supreme Court. In an Elle magazine interview published this week, she said: “If I resign any time this year, [President Obama] could not successfully appoint anyone I would like to see on the court. … So anybody who thinks that if I step down, Obama could appoint someone like me, they’re misguided.”

Consider me misguided. Chances are the Senate would approve a justice like Ginsburg.

Why do I say that? Ginsburg’s ideology and qualifications — the two most important factors for confirmation (more on this in a moment).

Ginsburg flew through the confirmation process in 1993 with 96 votes, including 41 from Republicans. Ginsburg was suggested to President Bill Clinton for the high court by Republican Orrin Hatch, and she wasn’t all that liberal, historically speaking, when nominated. She had a Segal-Cover ideological score, a metric that uses newspaper editorials to rate justices on a liberal-conservative scale, of 0.68 (1.0 being the most liberal).

That’s less liberal than both of Obama’s appointees, Justices Elena Kagan (0.73) and Sonia Sotomayor (0.78), when they were nominated. It’s more moderate than liberal lions such as William J. Brennan or Thurgood Marshall, and it’s more moderate than any Republican nominated since Robert Bork in the late 1980s, with the exception of Justice Anthony Kennedy.

Additionally, Ginsburg was one of the most qualified candidates ever nominated to the Supreme Court. Segal-Cover also has a qualification score, and Ginsburg earned a perfect mark (1.0). Kagan (0.73) and Sotomayor (0.81) were less qualified. In the post-Bork era, only Chief Justice John Roberts (0.97) is close to Ginsburg in qualifications, and he got 78 confirmation votes despite his very conservative record.

You could argue that the Senate has become more polarized since Ginsburg was confirmed, and maybe even since Sotomayor and Kagan were in 2009 and 2010, respectively. According to work by Washington University in St. Louis Professor Lee Epstein et al., ideology has grown as the key determinant in each senator’s vote since the Bork hearings.

But it so happens that I had been working on a model to predict the likelihood of a senator’s vote on a Supreme Court nominee. I’ll get into it more in-depth in a future article, but a model based on the nominee’s ideology and qualifications, the partisan makeup of the Senate and the president’s approval rating does a good job in predicting how senators vote.

(Note: Epstein et al. also found, not surprisingly, that even when controlling for ideology, party matters. A moderate Democrat is much more likely than a moderate Republican to vote for a Democratic president’s nominee. I measure the ideological difference of a nominee and senator through a normalized ideological distance from a nominee’s Segal-Cover ideological score and a senator’s Common Space DW-Nominate score.)

When you put all of these variables into a logit model to explain the votes of the past 10 nominees, 92 percent of all 990 individual votes are correctly classified. That’s pretty darn good. 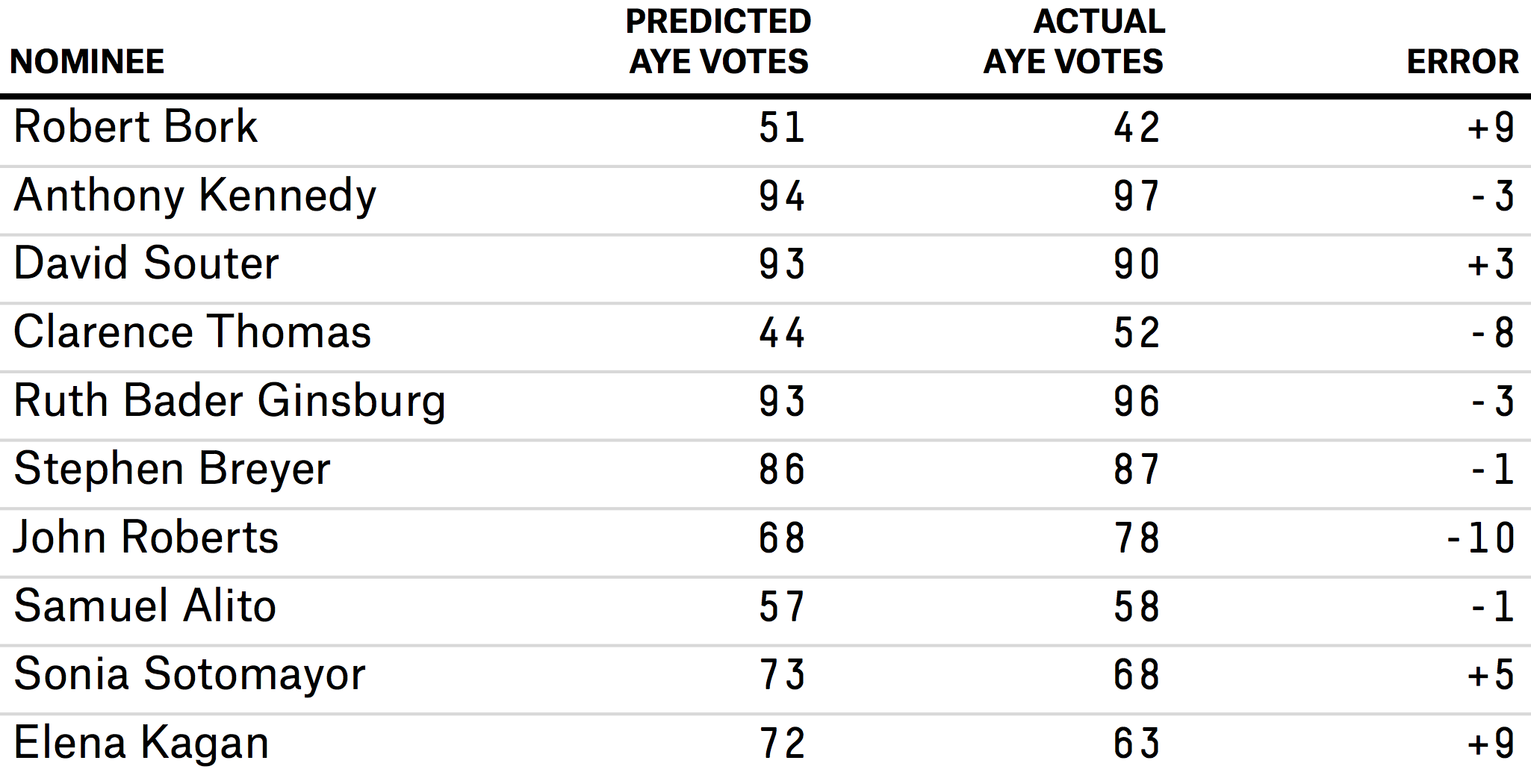 The model isn’t perfect, but it hasn’t become any more inaccurate over time. Kagan’s and Sotomayor’s vote totals were somewhat lower than expected, but not by a wide margin.

So, I feel some confidence in using the model to test how many votes someone matching Ginsburg’s ideology and qualifications would get in 2015. Let’s give the GOP 55 seats in the next Senate (even though, at this point, that seems unlikely) and plug in the DW-nominate scores for the candidates in the most likely races to get them there. (Note: Some potential senators don’t have DW-Nominate scores. In those cases, I used the normalized ideological scores I wrote about in July.) Add in a presidential approval rating of 43 percent (about where Obama has been hovering), and the ideological and qualification scores for Ginsburg.

Even if Republicans win 55 seats, a Ginsburg clone would be projected to get 80 votes.

Now, it’s certainly possible that the model isn’t picking up on the polarization that has occurred in recent years. And it’s possible that, with a majority, Republicans will try to run out the clock on Obama. I doubt, however, that that is possible to the tune of 20 votes — the error that would be needed for a Ginsburg-type to be at risk of a filibuster in 2015).

Despite Ginsburg’s protests to the contrary, a nominee like her would be a heavy favorite to make it through the Senate.