This year’s San Antonio Spurs are an anomaly. First of all, they have the distinction of being only the second Gregg Popovich-coached team to begin a season having not made the playoffs the year before. The 1996-97 Spurs missed out on the postseason as well, though they had the built-in excuse of having star center David Robinson play just six games. The Spurs finished that season with the NBA’s third-worst record, but they won the draft lottery and the right to select Tim Duncan — and the rest is (literally) NBA history, as the team made the playoffs in a league-record 22 consecutive seasons following Duncan’s selection.1

This particular Spurs team is also unusual for its youth (relative to other Spurs teams). It’s the youngest team of the Popovich era, with a minutes-weighted age of 26.8 years old,2 per Basketball-Reference.com. This is also the fifth consecutive season that the Spurs are on track to trot out a younger team than they did the year before — the longest streak of Popovich’s tenure. 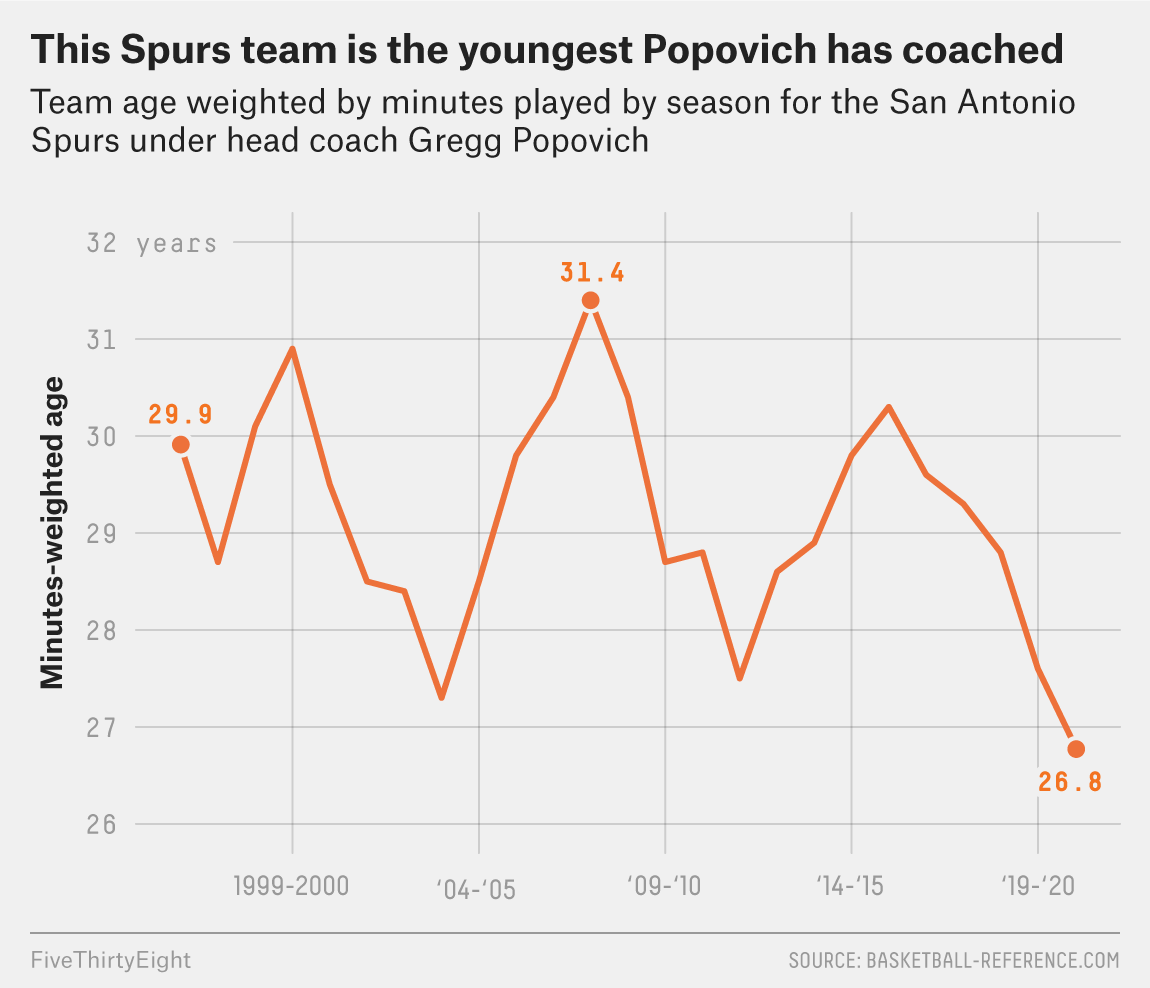 The youth movement is being driven primarily by three players: Dejounte Murray, Lonnie Walker IV and Keldon Johnson. Murray, in his age-24 season, is averaging 32.6 minutes per game — second-most on the team behind DeMar DeRozan. Walker, 22, is at 28.9 minutes a night; and Johnson, 21, is playing 31.4 minutes per game. It’s the first time since the 2015-16 season that any Spur in his age-24-or-younger season is averaging at least 28 minutes a night.3 It’s also just the second time in the Popovich era that multiple Spurs of that age have reached that minutes threshold. The last time was all the way back in the 2002-03 season, when a 20-year-old Tony Parker and 24-year-old Stephen Jackson each got there.

This year’s youthful trio is actually driving a decent amount of the Spurs’ success — at least, when they’re not being weighed down by the presence of DeRozan and LaMarcus Aldridge, with whom they typically start every game.

According to Cleaning the Glass, since the start of the 2019-20 season, Murray, Walker and Johnson have played 275 non-garbage-time possessions alongside DeRozan and Aldridge, during which they’ve been outscored by 8 points.4 In 352 non-garbage-time possessions they’ve played with only one or none of the two older stars on the floor, however, the Murray-Walker-Johnson trio has outscored opponents by 36 points. San Antonio’s point differential is plus-19 on the year, per NBA.com, so the minutes that the young guns have played without having to share the floor with both older players have proven quite valuable.

Murray, Walker and Johnson are each fascinating players in their own right, but they also fit together quite well.

Murray is the lead ball-handler and playmaker, as well as an exceptional defender. His assist rates are not quite as high as a prototypical point guard because he essentially shares ball-distribution responsibilities with DeRozan, but he has cut his turnover percentage dramatically for the fourth consecutive year.5

Murray made an All-Defensive team during his second NBA season despite making only 48 starts and averaging just 21.5 minutes per game. This year, he’s once again among the league leaders in deflections, per NBA.com’s hustle stats, and he’s also a fantastic rebounder. His 101 boards are second-most among all NBA guards so far this season,6 according to Second Spectrum, and his 21.5 percent defensive rebound rate is on par with players like Anthony Davis and Blake Griffin. All of this helps make up for the fact that he is often unable or unwilling to shoot from beyond the arc.

Walker is perhaps the team’s best outside shooter, having knocked down 39.6 percent of his threes in his three-year career. He works well as a secondary ball-handler and is often at his best attacking a closeout, blowing past an on-the-move defender to get to the rim or swing the ball to an open teammate. According to Second Spectrum, 176 players have faced at least 50 opponent closeouts so far this season; the 1.385 points per possession San Antonio has scored on plays where Walker has faced a closeout ranks 28th among that group, putting him in the 84th percentile.

Walker isn’t quite as strong a defender (or rebounder) as either Murray or Johnson is, but Popovich has seen fit to challenge him on that end nonetheless. Walker has been the team’s primary defender against Brandon Ingram, Shai Gilgeous-Alexander and Kawhi Leonard, and he’s put in time against guys like Donovan Mitchell, Damian Lillard and Ja Morant. He got pretty well roasted by the smaller guards, but he acquitted himself nicely against the wings.

After playing only 301 minutes during his rookie season (and only 91 of them pre-bubble), Johnson has taken on a significantly expanded role this year. Listed at 210 pounds last season, Johnson bulked up to 220 for this year, which has helped him free DeRozan of defending some of the tougher big-wing and power forward matchups.

Johnson has been San Antonio’s primary defender on, at times, forwards as diverse as LeBron James, Christian Wood, Zion Williamson and Pascal Siakam. That’s allowed DeRozan to spend those games defending Marc Gasol, P.J. Tucker, Josh Hart and OG Anunoby, thus conserving his energy for the offensive end, where he has far more responsibility. Johnson has also carried his strong college shooting over to the pros, and he’s completely fearless attacking the basket: Among the 131 players who have recorded at least 50 drives to the basket this season, per Second Spectrum, Johnson ranks first in blowby percentage. (Walker is 14th, by the way.) My hypothesis is that a rim wronged him at some point in a previous life; it seems like the only logical explanation for the violence with which he attacks them.

Rookie wing Devin Vassell (a 20-year-old averaging 17.3 minutes per game) hasn’t gotten his shots fall yet, but on the other end of the floor, he’s showing some of the reasons why the Spurs made him a lottery pick. He’s a preternaturally instinctual defender, and at times he appears gifted with the ability to teleport into passing lanes.

Around this time last year, we were pretty down on the Spurs. They were sporting their worst defense in team history, trotting out lineups that resulted in cramped spacing, essentially refusing to play their two best young players at the same time (Murray and Derrick White)7 and rarely playing two of the other young guys (Walker and Johnson) at all.

But the Spurs found something in the bubble, playing DeRozan alongside the kids, jetting up and down the floor in spaced-out lineups. San Antonio ranked 15th in pace before the hiatus, compiling a 27-36 record during that time. They shifted younger, smaller and faster (third in pace, and 4.9 possessions per game faster than before) during their time in Disney, and they finished the seeding games with a 5-3 record.

Re-integrating Aldridge, who didn’t play in the bubble, has meant slowing down a bit again this season, but the Spurs have stayed small and spread out, and they’ve been better off for it. Whereas Aldridge played 952 minutes alongside either Trey Lyles or Jakob Poeltl in the frontcourt last season (minutes during which the team had a 115.0 defensive rating, the equivalent of the worst defense in the league), he has played only 51 such minutes this year. It doesn’t seem like an accident that they’ve reclaimed their rightful place among the league’s top 10 defenses.

With renewed stinginess on that end, ultra-hot shooting from Patty Mills (45.7 percent from deep!), perhaps the best all-around season of DeRozan’s career (he’s working on a career-high 7.1 assists per game and 34.6 percent from three) and two-way contributions from late-round youngsters coming into their own, the Spurs are sitting at 8-6, right in the thick of things in the Western Conference. Right where they usually are.