Over time, NBA teams take on certain characteristics in the public consciousness. The Lakers have mystique and superstars. The Celtics have the parquet floor. The Raptors have Jurassic Park, and the Grizzlies have (or had?) Grit and Grind. The Heat have their culture and conditioning program, the Nuggets have their altitude-infused offense, the Rockets have their math, and the Knicks have their chaos.

For just about the entirety of their existence, the San Antonio Spurs have had the consistency of excellence. The Spurs have been around since 1967,1 but they have missed the playoffs only four times since joining the NBA in 19762 — and never in back-to-back seasons.

The last time the Spurs missed the postseason was the 1996-97 campaign, when David Robinson was limited to just six games, and the team slumped to a 20-62 overall record without him. Their reward was the No. 1 overall pick in the 1997 draft, Tim Duncan, and perhaps the longest run of sustained contention in modern NBA history. San Antonio won at least 50 games3 every single season from Duncan’s debut until the season after his retirement, making six trips to the NBA Finals and winning five of them along the way.

They’re riding a streak of 22 consecutive playoff appearances, but this year, it looks like they might be on the outside looking in — for the first time ever in a full season coached by Gregg Popovich. The Spurs are just 7-14 after 21 games, with a point differential that largely backs up that record. They rank 24th in the NBA in Basketball-Reference.com’s simple rating system (SRS),4 lumped in with teams like the Bulls and Cavaliers.

Perhaps even more unusual than their lack of success to this point in the season, however, is the root cause of it. It’s not the offense: Even after a disastrous showing against the Pistons on Sunday, San Antonio’s offense still sits just 0.1 points per 100 possessions outside the league’s top 10. It’s their defense that’s the problem.

The ineptitude of this year’s San Antonio defense compared to Spurs teams of the past is perhaps best displayed by scaling their defensive rating against the league average. Fans familiar with baseball statistics like OPS+ will recognize this formula: The average defensive rating is given a score of 100, while a team whose defense is 10 percent worse than average receives a DRtg+ score of 110 (because higher numbers are bad for a defense), and a team whose defensive rating is 10 percent better than league average receives a DRtg+ score of 90. 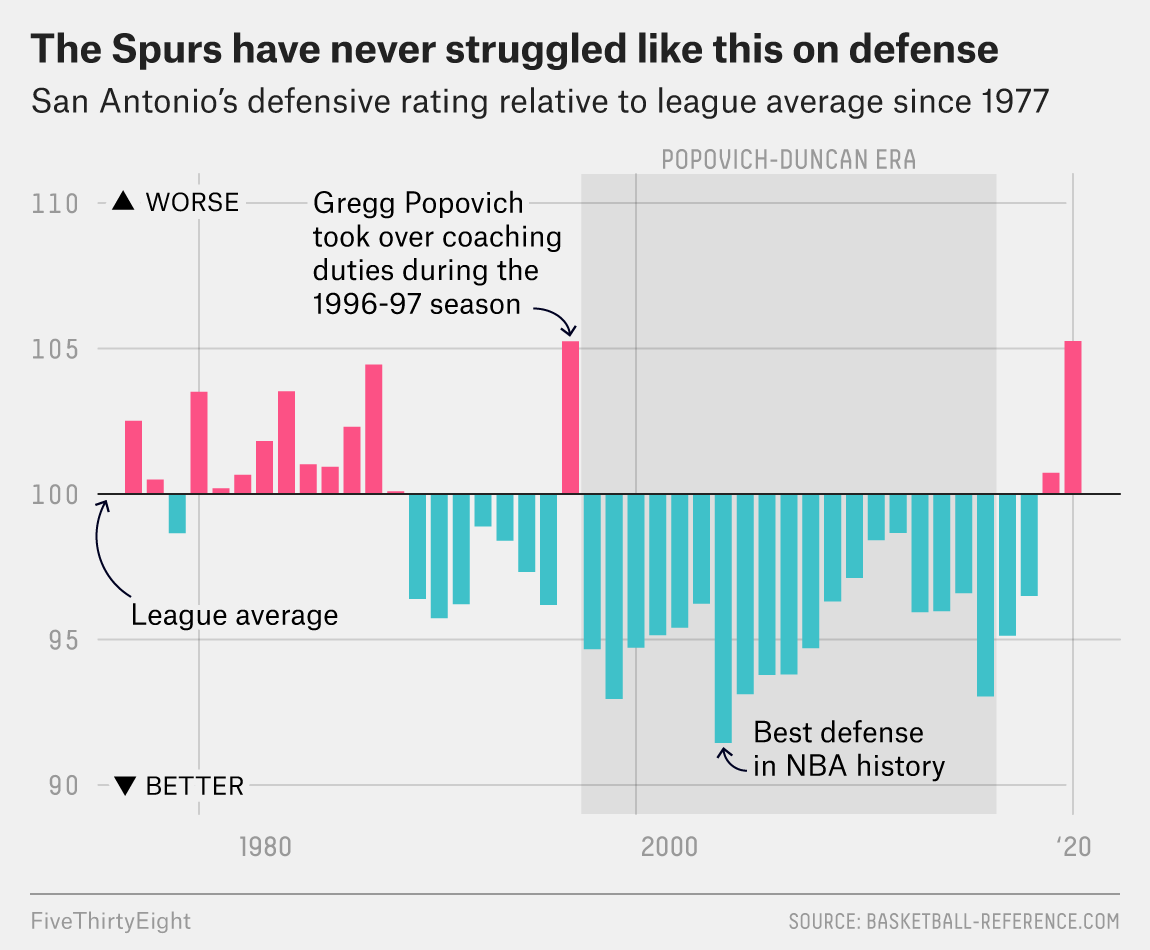 Taking a look at their performance in the Four Factors, we see that the Spurs have the fifth-best defensive rebounding rate in the league, and that they have held opponents to a below-average free-throw rate as well. Both of those marks are characteristic of Spurs defenses in years past. But the Spurs also rank second-to-last in opponent’s turnover rate, with opposing teams coughing it up on only 11.4 percent of possessions against San Antonio.7

Given that possessions can end only with a shot attempt, foul or turnover, we can safely assert that opponents have had a chance to score on a greater share of their possessions against the Spurs this season than they have against any team save for the Mavericks. And on those possessions where they put up a shot, opponents have managed an effective field-goal percentage of 54.7, the fifth-highest mark in the NBA; that’s despite the Spurs forcing opponents to shoot from midrange on a greater share of their attempts than all but four other teams in the league.

The Spurs’ defensive problems seem to stem from two weaknesses: an inability to defend the rim and an inability to deal with pick-and-roll action. Spurs opponents have the NBA’s seventh-best conversion rate on shots within 3 feet of the basket this season, and the Spurs have also allowed far more dunks (102) and layups (281) than the average team in the league, which has allowed 91 dunks and 264 layups so far.

San Antonio’s back-line help defense also has been extremely ineffective, allowing the league’s fourth-most points per possession on drives with a help defender present, according to Second Spectrum. There are 132 defenders who have provided help on at least 35 drives this season, per Second Spectrum’s data, and two of the Spurs’ frontcourt starters for most of the season (LaMarcus Aldridge and Trey Lyles) rank 96th and 118th among that group, respectively, in opponent points allowed per drive.

Aldridge has often appeared off-balance when attempting to cut off ball-handlers’ access to the rim, and he has been guilty of over-extending his help and leaving his man wide open.

Aldridge also has had a ton of trouble defending pick and rolls, and opponents have targeted him repeatedly in those actions. Only three players have defended the screener in more pick and rolls than Aldridge this season, and among the 124 players who have been targeted 100-plus times, the 1.02 points per chance the Spurs have allowed with Aldridge directly involved in the action ranks 107th. (Lyles ranks 117th in the same stat but on considerably less volume.) With their two primary big men ranking so poorly here, it’s not surprising that the Spurs have the league’s fourth-worst pick-and-roll defense overall. In a pick-and-roll-heavy league, that’s not where you want to be.

Given the personnel on hand, it’s difficult to see the Spurs suddenly sparking a defensive renaissance. We’re now a quarter of the way into the season, and they look like one of the very worst point-prevention units in the league. It would presumably help if they were at all willing to play their two best defenders at the same time, but Dejounte Murray and Derrick White have played only eight minutes together all season. Popovich has been reluctant to use them together, seemingly for fear of undermining the offense by pairing a non-shooting backcourt with the team’s midrange-heavy fulcrums, but he may have to try it before his team runs out of time to turn things around.

Experiencing so much trouble stopping opponents from scoring is not a familiar place for the Spurs to be, but neither is 12th place in the Western Conference. To avoid missing the playoffs for only the fifth time in the last 44 seasons, they may have to start doing a few things they don’t want to do.