Behold, the FiveThirtyEight curse! It was Brazil’s World Cup to lose, and lose it did. Lionel Messi is impossible, but was anemic in the tournament’s final match, and his Argentina side took home silver.1 Nigel Richards was destined to win his sixth National Scrabble Championship this week in Buffalo, New York. He did not.

As a clear and direct causal result of my recent quantitative Richards hagiography, the Scrabble wizard from Malaysia via New Zealand struggled (relatively), going 18-13, finishing in 16th place. It was his first finish outside of the top two in a National or World Championship since 2005, and his first outside the top 10 at Nationals ever.

But the sun rose this morning, and there is a new king of the Scrabble world: Conrad Bassett-Bouchard. The 24-year-old from Portland, Oregon, finished with a tournament-best record of 22-9, and took home the $10,000 prize.

Here are the final standings, after the 31-game marathon: 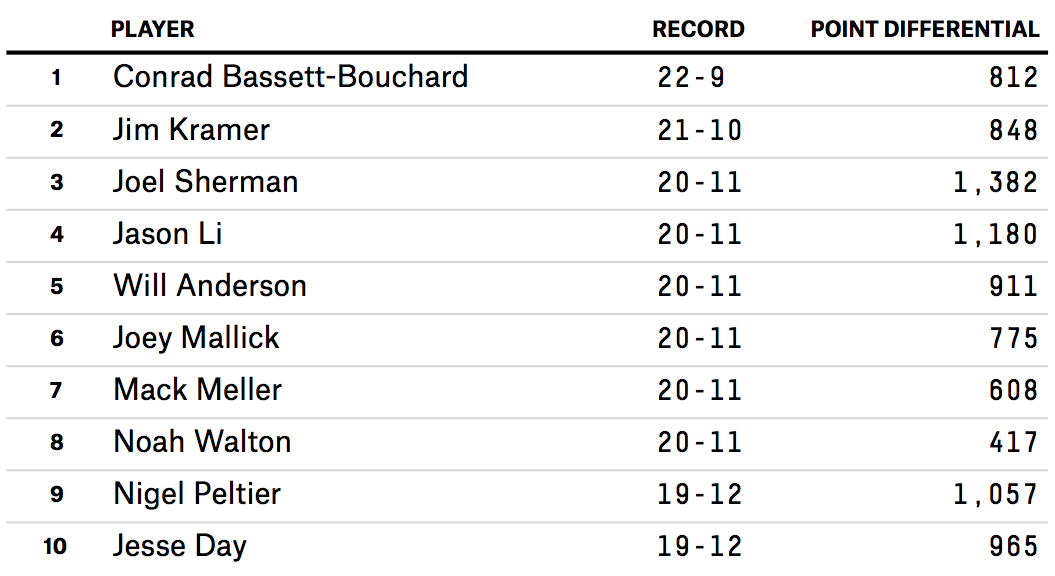 The venerable board game’s most prestigious tournament was a thrill to watch unfold (I swear — and I was just watching it online). The leaderboard was always in flux, and anyone attempting to break away from the pack was promptly reeled in by the prolix peloton. The final day was incredibly tense — and became emotional. Going into the last three games, nine players were within two games of the lead. In the penultimate game, Bassett-Bouchard and Noah Walton were matched in a de facto semifinal. They are friends, and live six blocks apart in Portland. Bassett-Bouchard also said they learn a lot from each other’s playing styles.

They both played a near-perfect game, but Bassett-Bouchard drew better tiles, and took over first place. He broke down in tears after the game, having just eliminated his friend from contention.

“I spent the first 10 minutes bawling my eyes out,” he told me by phone. “We both knew it was coming. He was a little more calm than I was. It was definitely bittersweet.”

Walton finished eighth. Bassett-Bouchard then survived a must-win final game against Jason Li — bingoing with DOCENTS and FLORIGEN, and racking up big points late with ANNEXE and KIBE.

Here’s a snapshot of the players’ net scores over the course of the games: 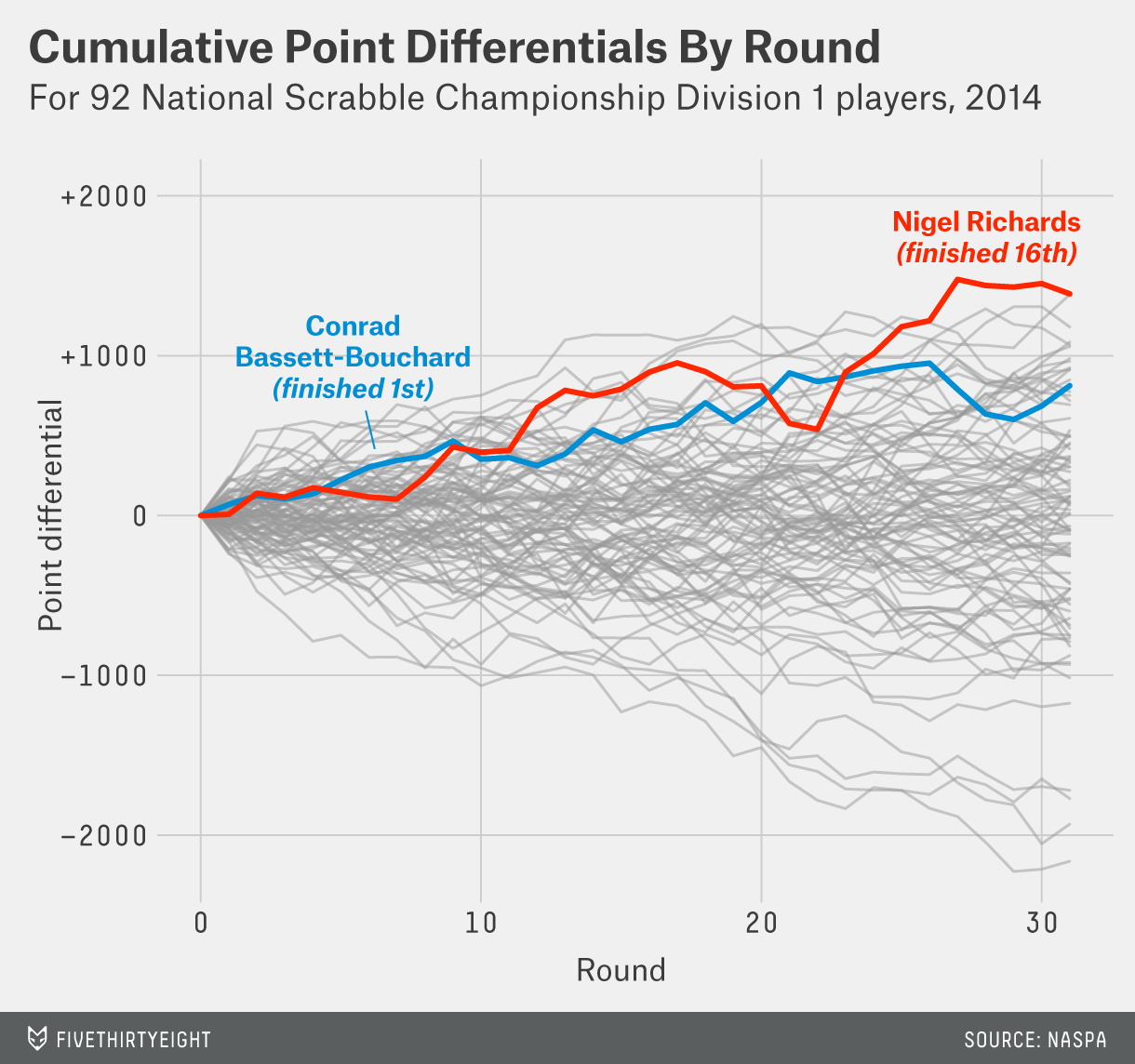 So why didn’t Richards win? Many are asking this question.

“It’s possible he’s worse than he was, but I wouldn’t say that for sure,” said Walton. It’s also possible everyone else is just getting better, he said. “Generally, the quality of play will rise. Especially in Division 1, where people are constantly trying to improve.”

There are arguments on both sides. Certainly things got off to an ominous start for Richards. He nearly lost his first game to the 272nd-ranked player, who would have won if she hadn’t overlooked some bingos. What’s more, Richards reportedly allowed someone to play a phony word against him — the nonword MOLEY — an unheard of event, given Richards’s legendary word knowledge.2 But there is luck in Scrabble and Richards is, as best I can tell, human.

On the other hand, it seems plausible that other players are getting better. Computer study tools such as Zyzzyva and Aerolith have made learning words considerably easier, and strong artificial intelligence players, such as Quackle and Elise, which serve as sparring partners for human players, have been getting stronger.

A first glance, though, doesn’t reveal obvious empirical evidence that the field is improving, at least relative to other years in which Richards has won. In his remarkable run of National Championships from 2010 to 2013, mean game scores (for both players combined) were 805.9, 800.2, 804.5 and 803.8. This year? 800.7.3 The strength of the field, over the relevant timeframe, does not tell the whole story.

There’s an even better argument to be made that Richards was just a bit unlucky. Objectively, he played great. He did what he does best: score tons of points. He averaged 438 points a game, the best in the field. He also had the highest single game, scoring 683 points in round 23, with five bingos.4

Richards’s “spread” — that is, his point spread, or total points scored minus total points conceded — was also the highest in the tournament. But he won fewer games than expected, and it’s the number of games won that determines the champion. (Spread is used in tournaments only as a tiebreaker.) Trying to relate scoring to wins is a well-established practice. A leading example is Bill James’s Pythagorean expectation. Given a certain level of scoring, a competitor can be “unlucky,” actually achieving fewer wins than expected, or “lucky,” actually achieving more. (See, for example, the 2012 Baltimore Orioles.) Here’s how that relationship looked in this week’s Nationals: 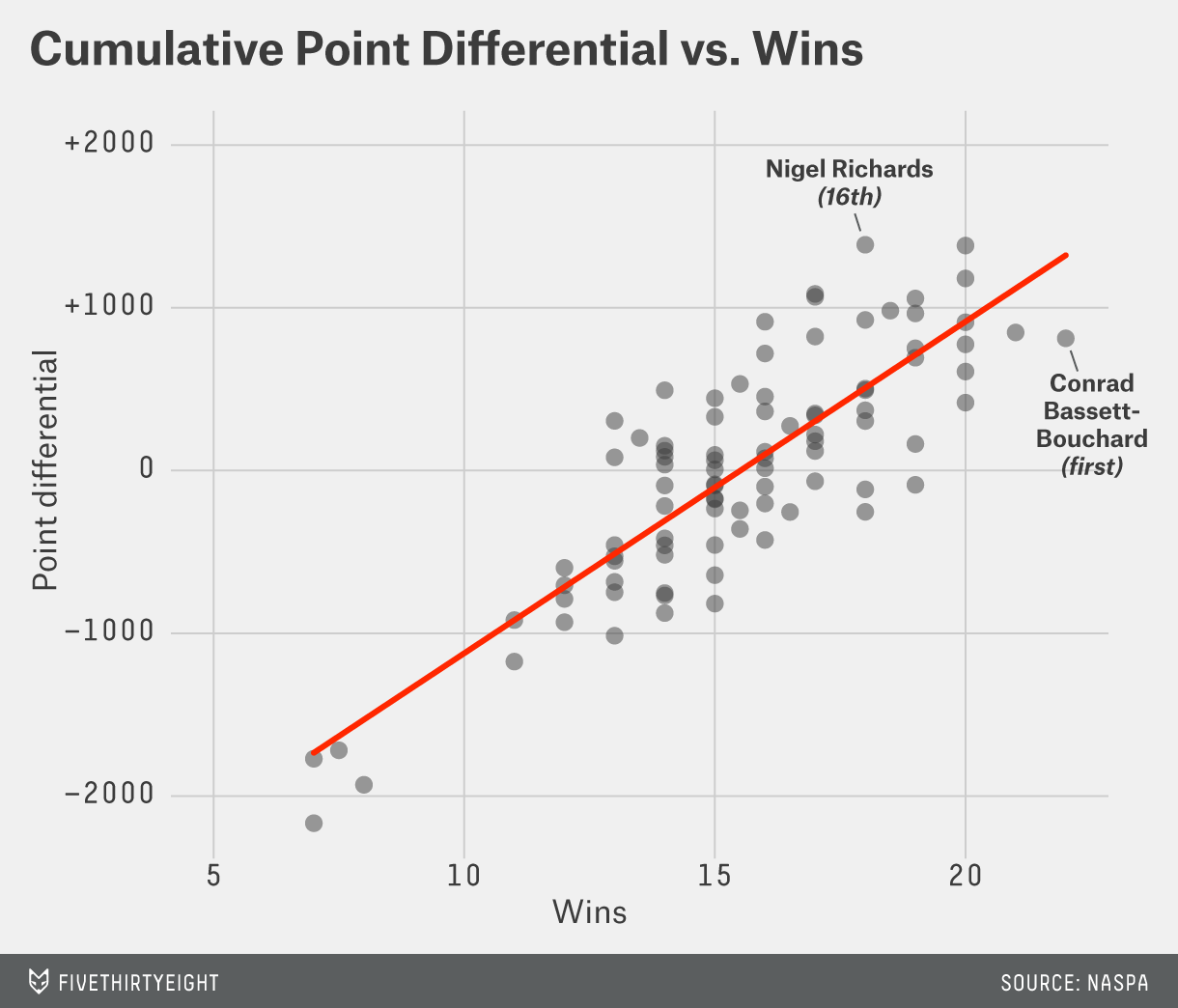 Assuming this simple linear relationship, Richards would have been expected to win more than 20 games — at least a few more than he actually did. Relative to the field as it stood, this would’ve put him in roughly third place.

New champ Bassett-Bouchard sees Richards’s performance a bit differently. In the past, “people didn’t try to understand his games,” he said. “People are beginning to understand how he plays.”5

And what has the new champion learned from the old?

“You have to have that extra bit of creativity or extra bit of spark. Nigel definitely taught me that,” Bassett-Bouchard said. The two didn’t play each other in this tournament. Their lifetime record? Tied 2-2.

“Finding ways to win when it doesn’t seem like there’s anything there,” Bassett-Bouchard said.

It’s clear this victory has meant the world to Bassett-Bouchard. “I’ve always been one of those people who was the odd man out,” he said. “It felt like I was the fan favorite going into the last day. It just sort of validated everything. The last 10 years of my life, doing this. It’s sort of like wow, this is unreal.”

So what’s next? “I’m just really excited for future Nationals. I can’t wait for all my friends to win. Especially Noah,” he said.

The events of this week notwithstanding, Richards maintains his best-on-the-continent ranking — although Bassett-Bouchard is nipping at his heels. “I’d guess he’s still the best player around,” said Walton.