When Japanese defender Saki Kumagai knocked in the game-winning penalty kick to complete Japan’s improbable comeback against the United States in the 2011 Women’s World Cup final, she made history not only for her country (which was still healing from a devastating tsunami months before), but also for women’s soccer.

With that win, Japan became the first country not named Germany, Norway or the United States to win a major women’s soccer tournament (World Cup or Olympics) since those competitions began in 1991. Add in Brazil, which finished second or third at four of those events, and women’s soccer has been one of the most top-heavy international sports over the past 25 years. Germany, the United States, Norway and Brazil won 23 of the 27 first-, second- and third-place medals/trophies at the Olympics and World Cup tournaments held from 1991 to 2008. For perspective, 10 different countries finished in the top three at the last six men’s World Cups.

In the 2011 Women’s World Cup, however, the rest of the world appeared to be catching up to the top teams. Not only did Japan knock off Germany and the United States — the top two teams in 29 of the previous 31 FIFA world rankings — to win the title, but other middle-tier teams appeared to be closing the gap.

The average margin of victory in group-stage matches in 2011 was 1.5 goals, by far the lowest average in any Women’s World Cup. In fact, since the tournament expanded to 16 teams in 1999, the average goal differential has been steadily declining, and the number of upsets has been rising.

Here are the numbers for group-stage matches in the last four World Cups (I’m defining an upset as a victory by a team that had less than a 30 percent pregame chance of winning, according to FiveThirtyEight’s World Cup model,1):

There were as many upsets in group-stage matches in 2011 as there had been in the previous three World Cups combined.

The declining goal differential and rising number of upsets were not merely a result of a small sample size; the gap between the top teams and, say, the 10th-best team in FiveThirtyEight’s Women’s Soccer Power Index (WSPI) has been shrinking. Two decades ago, the top three teams in WSPI had, on average, a 95 percent chance of beating the 10th-best team on a neutral field in a knockout-stage round. Today, that percentage has plummeted to 77 percent. 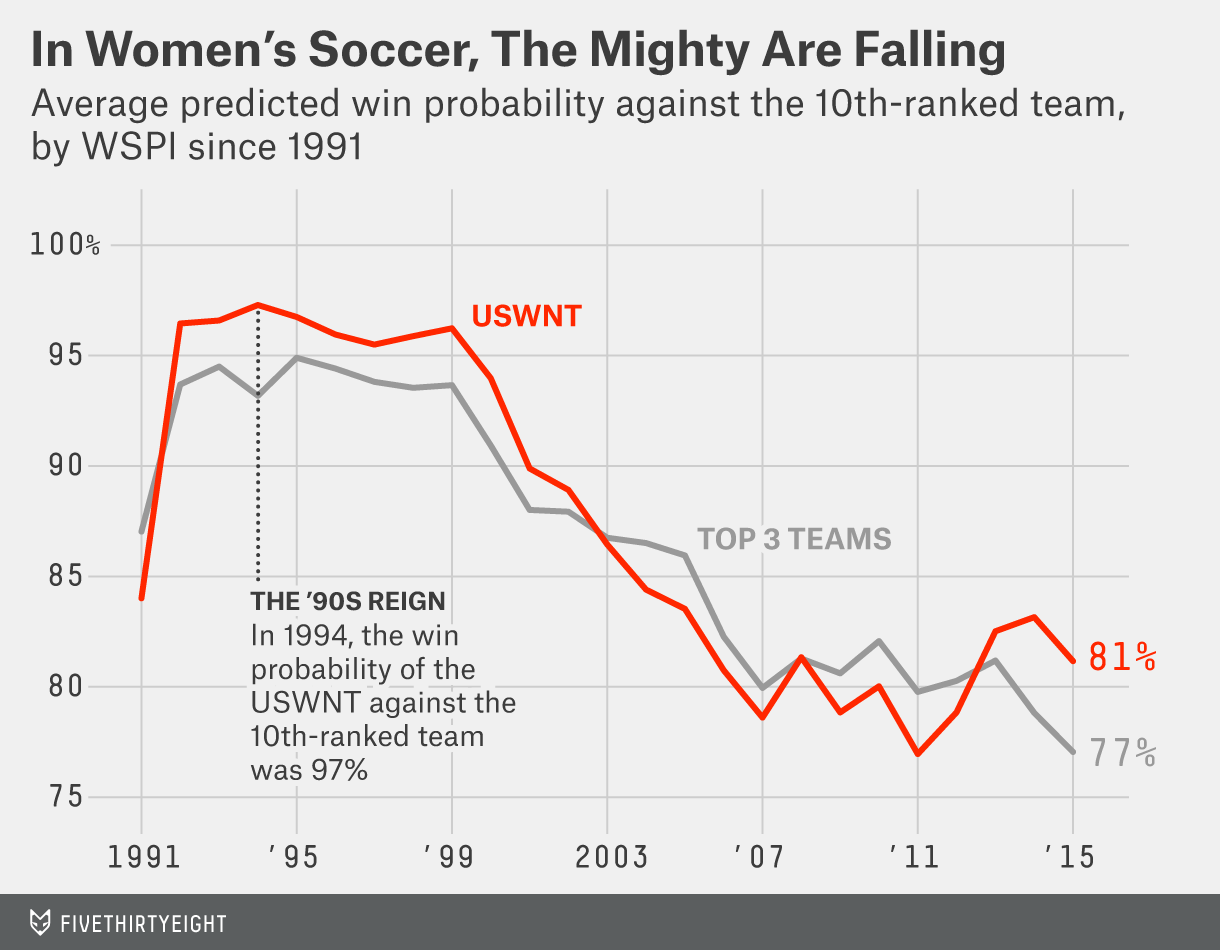 Look no further than the U.S.’s 8-2-4 record over the past six months, which included three draws against teams ranked 15th or worse in the latest FIFA rankings, to see that the rest of the world is catching up.

What does this mean for the 2015 Women’s World Cup in Canada?

The top 10 teams remain closely bunched together, according to WSPI. As a result, there are six teams –- the U.S., Germany, Japan, Canada, France and Brazil -– with at least a 15 percent chance of reaching the final in Vancouver, according to the model. That would have been unheard of 16 years ago!

The trend of closer group-stage matches, however, is likely to move in the opposite direction because the field has expanded from 16 to 24 teams. Four of the first-time competitors rank 37th or worse in the FIFA rankings, so the favorites in each group will have an easier path. Their projected point total is higher than in the last two World Cups because of the watered down field.2

For the United States, which finds itself in the so-called Group of Death in Canada, it will take more than sheer speed and strength to win this World Cup. As U.S. midfielder Carli Lloyd said: “Long gone are the days of the Americans being able to just physically beat teams. It’s not that way anymore.” Countries are putting more resources into their women’s soccer programs, and the result is a more polished product on the field.

So while the United States and Germany are the front-runners in our model and around the world, don’t be surprised if the winner comes from outside the top few teams. The gap may not just be closing in women’s soccer — it may have already closed.