So what if the pregame story lines have been asinine and absurd? On Sunday, the New England Patriots and Seattle Seahawks will be among the most talented teams to take the field in the Super Bowl.

Elo’s lofty ranking of the game might seem surprising given that the Seahawks and Patriots each went 12-4 in the regular season, excellent but hardly extraordinary records. Those records probably underestimates their strength, however. Both teams played relatively tough schedules, and both finished the season stronger than they started it — notwithstanding the Patriots’ throwaway loss in Week 17, when they rested their stars against the Buffalo Bills.

Furthermore, both teams have been at the top of the league for some time. That matters when assessing the historical strength of an NFL team: 16 regular-season games just isn’t all that large a sample, so Elo ratings predict performance better because they carry over some of a team’s rating from one season to the next. The Seahawks and Patriots entered this season ranked No. 1 and No. 3 in Elo, respectively, based on their ratings at the end of 2013. It’s not as though either of these teams backed into the Super Bowl — as, for instance, the 2003 Carolina Panthers did when reaching the title game with a 11-5 record. (Those same Panthers went 1-15 in 2001, 7-9 in 2002 and 7-9 in 2004.) 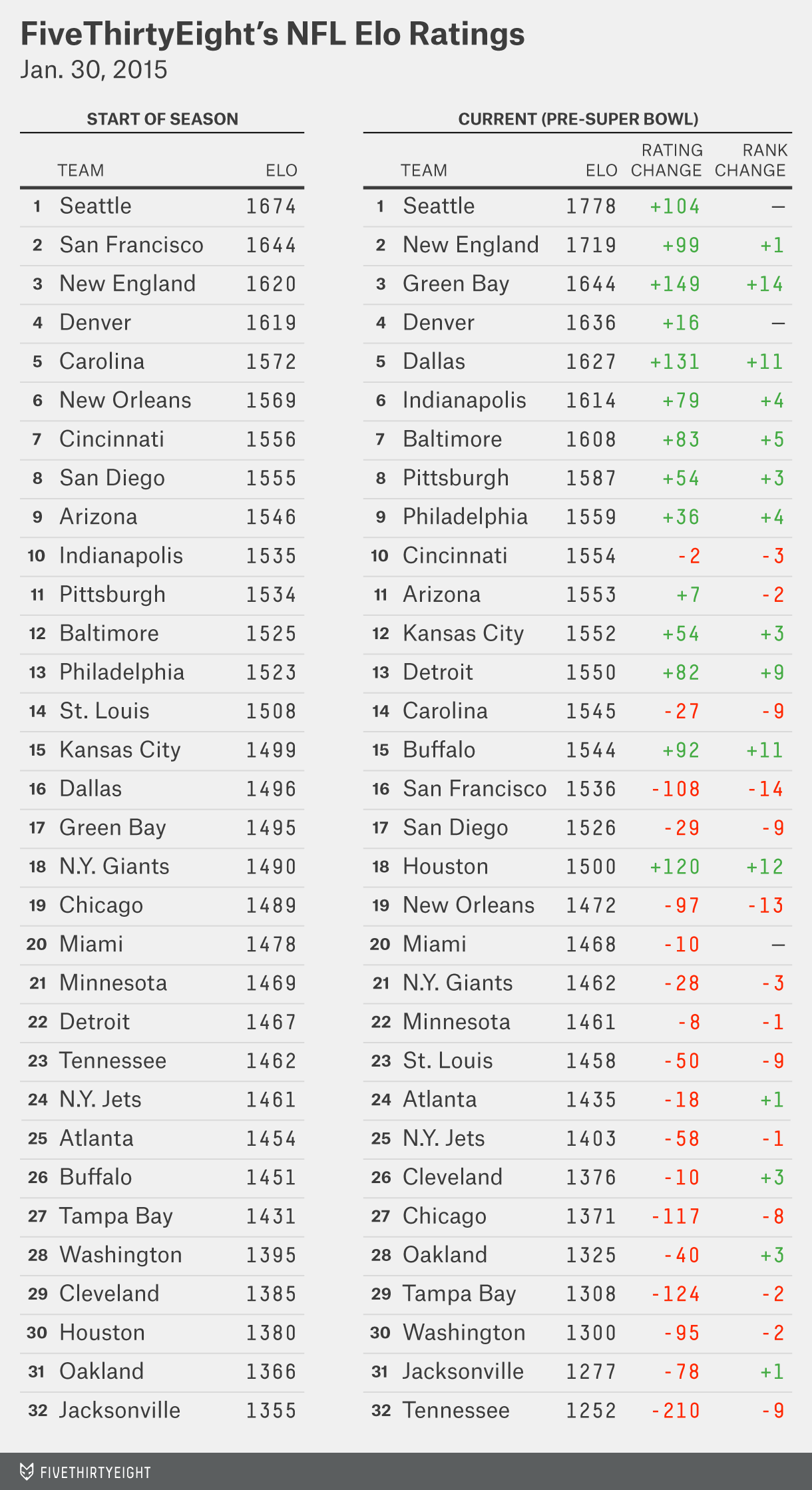 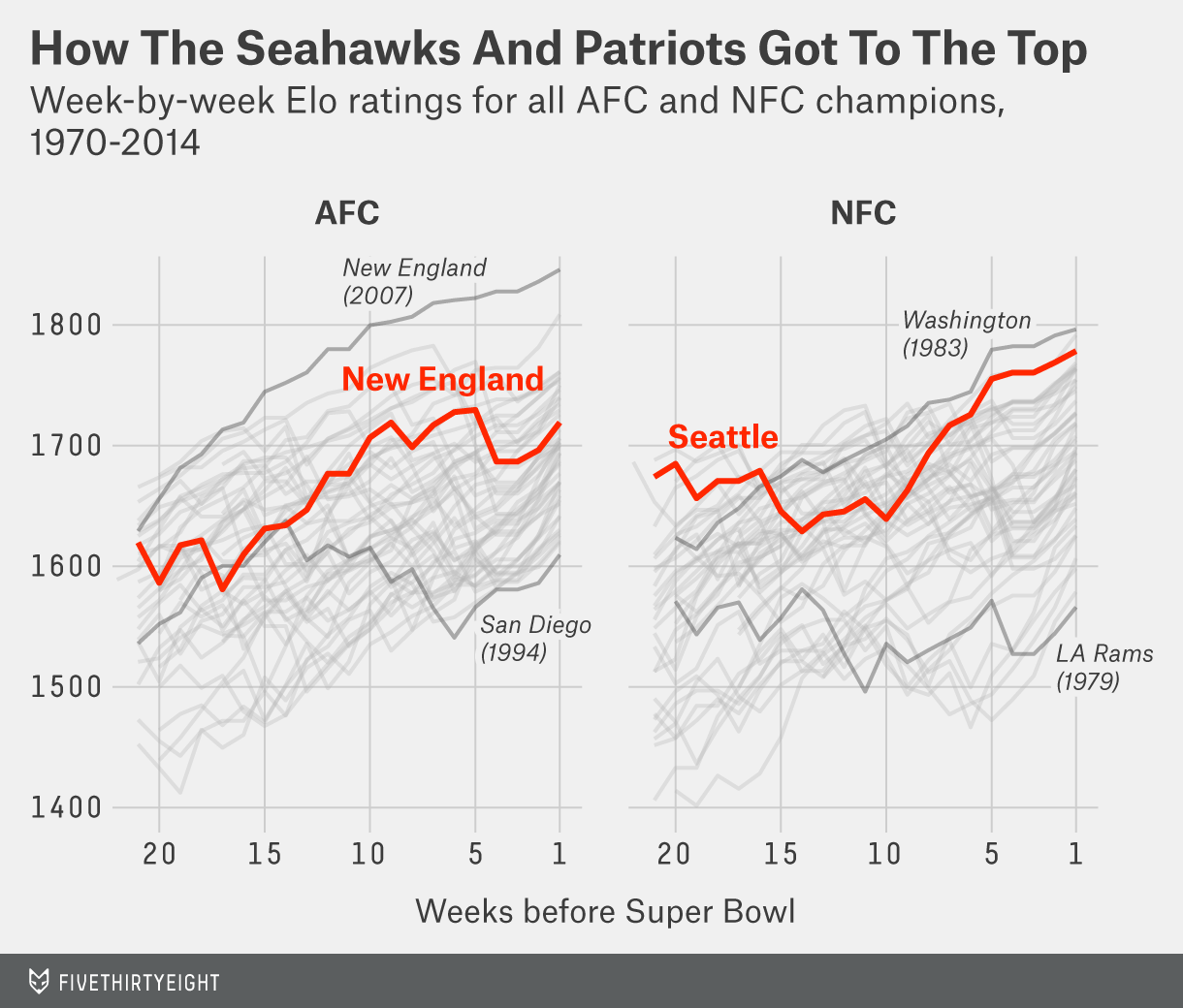 But it’s not only that the Seahawks and Patriots are strong teams: They’re just about evenly matched. The Vegas line opened as a pick ’em, and most sports books have the Patriots as mere one-point favorites. Elo, which loves the Seahawks, differs slightly here: It has Seattle as 2.5-point favorites. But that’s partly because the system, in its simplicity, punished the Patriots for their meaningless Week 17 loss against Buffalo. Without that game, the Patriots’ Elo rating would be 1756, which would make Seattle only one-point favorites and which would vault this matchup ahead of Super Bowl XIII into the top slot of all time.

We can place past Super Bowls into four quadrants, as we have in the chart below. The horizontal axis represents the average Elo rating of the two participants; the vertical axis represents the Elo-rating difference between the teams. (The years in the chart correspond to the year of the NFL regular season. For example, Super Bowl XX, played Jan. 26, 1986, is designated as 1985 because that’s the year most of us would associate with the 1985 Chicago Bears.) 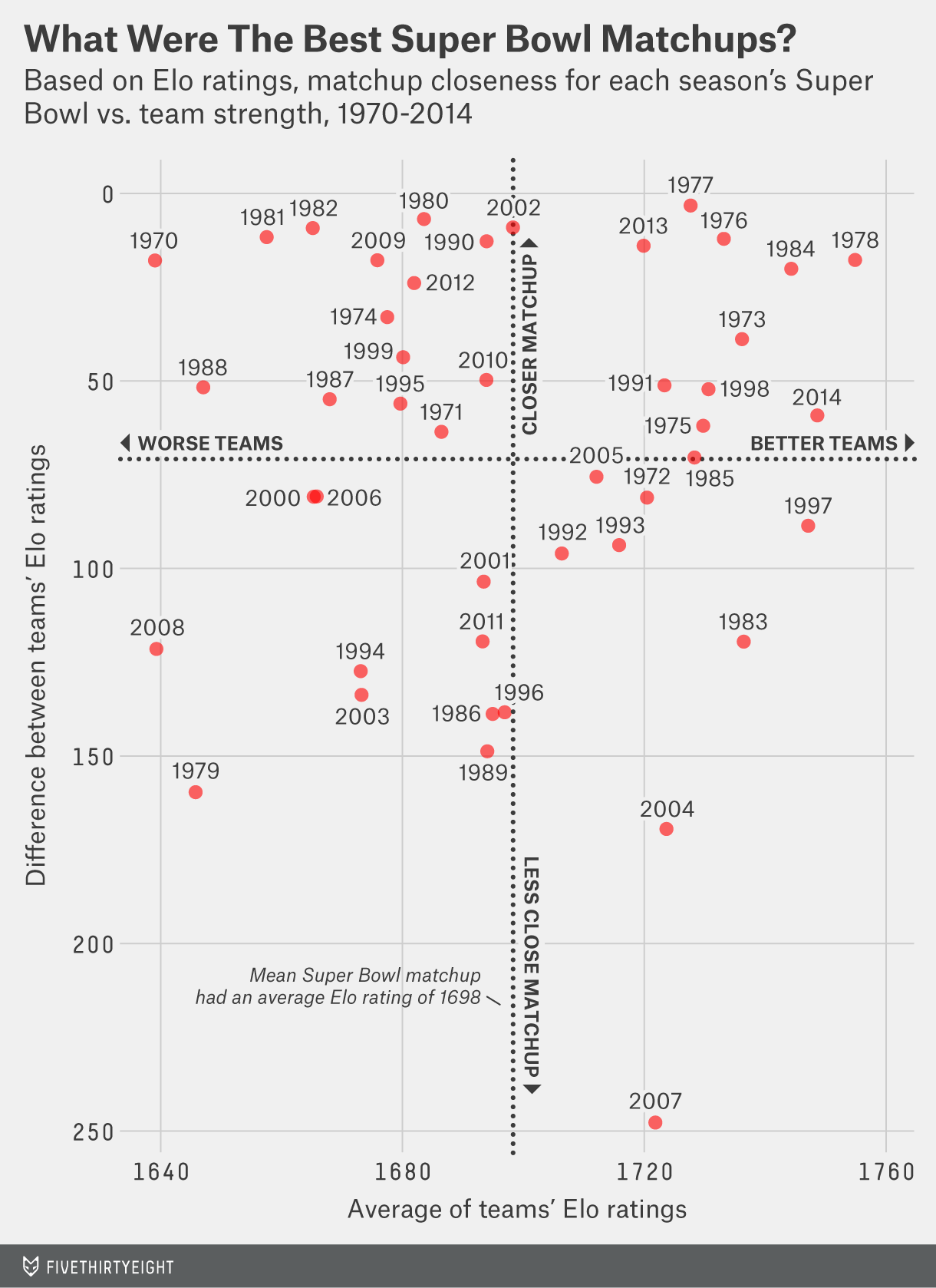 The top-left quadrant represents games in which the teams were fairly evenly matched but not particularly great — like the Super Bowl we had two seasons ago between the San Francisco 49ers and Baltimore Ravens. The bottom-right quadrant is for Super Bowls when the average Elo rating was high but because of one spectacular team, like when the undefeated 2007 Patriots played (and lost to) the New York Giants.

It’s the games in the top-right quadrant that had both things going for them, as this one does: great teams but also a reasonably even matchup.

But here’s the catch: Those great-seeming matchups didn’t translate into great Super Bowls.

Below, we’ve ranked the 48 prior Super Bowls based on a version of the Excitement Index, which measures the quality of a game based on how much win probability changes over the course of it. This season’s NFC Championship would, obviously, qualify as an extraordinarily exciting game — the Seahawks’ win probability shifted from near zero to very likely late in the fourth quarter, and then back to basically 50-50 after the Packers kicked a field goal to send the game to overtime, and then up to 100 percent once the Seahawks won in OT. By contrast, the AFC Championship — the Patriots were favored, pulled ahead early and never looked back — would have a low Excitement Index.

The Excitement Index is not perfect — compared with how we would rank the games intuitively, it seems to give too little credit to unlikely fourth-quarter comebacks, for instance. But it does a reasonable job of ranking the Super Bowls. The top Super Bowl of all time, according to the Excitement Index, was Super Bowl XXIII, played after the 1988 regular season between the 49ers and Cincinnati Bengals. Most of the other obvious candidates — like Wide Right and the Giants’ upset of the Patriots in Super Bowl XLII — also rank highly.

The win probability data we’re using is from Pro-Football-Reference.com, and accounts for the point spread, so a game that turns out to be lopsided between teams that looked evenly matched beforehand (like last year’s Super Bowl or Super Bowl XVIII) will get a bit of credit. A game in which a heavy favorite romps to victory (like Super Bowl XXIX, when the 49ers, as 19-point (!) favorites against the San Diego Chargers, were ahead 14-0 after four minutes of play) will get almost none.

But the hope is for a Super Bowl that stays tight from wire to wire with plenty of drama in between. And if you’re looking at those matchups that looked best on paper going in — those from the top-right quadrant of the chart — you won’t find many that turned into great games.

There’s one very encouraging precedent. The aforementioned Super Bowl XIII, played after the 1978 regular season, had a lot of parallels to this one. The Cowboys, like this year’s Seahawks, were a 12-4 team coming off a Super Bowl championship. The Steelers, like this year’s Patriots, were an aging dynasty hoping for one more ring. (As it turns out, they’d win two more.) The Steelers won 35-31, and the outcome might have different if not for a dropped touchdown catch by Cowboys tight end Jackie Smith. Super Bowl XIII ranks very well in the Excitement Index and even higher on subjective lists of the best Super Bowls, one of which has it as the best game ever.

But pretty much every other game in the top-right quadrant stunk:

We wouldn’t say to expect a bad Super Bowl on Sunday. This is a noisy data set. It’s probably a fluke that the games that looked best on paper turned out to be among the worst on the field.

But that’s the point: Any one game won’t tell you all that much, and as we’ve pointed out before, an NFL matchup that looks just about even beforehand is only slightly more likely than average to result in a great game. This could be a super Super Bowl — but it could just as easily turn out to be a dud, in which case Deflate-gate and Katy Perry will burn an SEO-optimized hole into our collective memories.