The Boston Bruins and Montreal Canadiens have one of the oldest and most heated rivalries in all of North American professional sports, and no moment typifies the animosity between the teams more than the events of March 13, 1955. Maurice “Rocket” Richard was the best hockey player on the planet then — the epitome of a goal scorer1 — but he was also a bit of a cheap-shot artist. After catching a high stick to the side of the head from Bruins defenseman (and former Canadiens teammate) Hal Laycoe, Richard went berserk. The Rocket used his stick as though it were a battle axe and hacked at Laycoe, hitting the defenseman in the ear and on the shoulder. He swung with such force that he shattered his stick in the middle. Most players didn’t wear helmets back then, and Laycoe was lucky the Rocket missed his skull.

A referee named Cliff Thompson attempted to put an end to the violence, only to catch fists from a rabid Richard.2 Boston police tried to arrest Richard after the game, but his teammates prevented them from entering the Montreal dressing room. NHL commissioner Clarence Campbell eventually suspended Richard for the rest of the regular season and the playoffs, a decision that set off riots in Montreal.

Richard’s violence that night was extreme, but the melee wasn’t the first in the history of the rivalry, and it certainly wouldn’t be the last. The two teams have played the most regular season games,3 playoff games and playoff series of any rivalry in league history, so it’s only natural that the Bruins and Canadiens absolutely, one-hundred percent hate each other’s guts. But thanks to temporary divisional realignment made necessary in order to limit travel during the pandemic,4 the Bruins and Canadiens won’t square off against one another this year — at least not until the playoffs. Not seeing the two rivals play at all in the regular season is one of the weirdest circumstances of this strange NHL season, though that could make for an even weirder and more contentious installment of the rivalry down the line.

As you might expect from a team with a record 24 Stanley Cups5 to their name, the Canadiens have fared much better than the Bruins over the years — especially in the playoffs. The Habs have won 25 of the 34 playoff series contested between the two teams, including all seven (!!!) Stanley Cup Final matchups. The Bruins aren’t scrubs — they have the third-best regular season points percentage in league history,6 behind the Philadelphia Flyers and, you guessed it, the Canadiens — but they mostly have not been able to hang with their rivals from the north, either.

All of that history notwithstanding, the rivalry has also kind of petered out a bit in the past decade. The two teams last met in the playoffs in 2013-14, and there hasn’t been any real beef since 2011 — when then-Bruins captain Zdeno Chára drove Canadiens forward Max Pacioretty’s head into a pylon while finishing a check that was perhaps not as dirty as Richard’s hatchet job … but was definitely not not dirty. Pacioretty suffered a cracked vertebrae and a severe concussion, and Montreal police launched a criminal investigation. (Chára, like Richard before him, was not arrested.)

[Can The Pittsburgh Penguins Save Their Season?]

It’s actually a bit miraculous that the rivalry is as intense as it is given the fact that the two teams have rarely ever been great at the same time. Both teams were at or around the peak of the league for most of the 1970s, some of the 1980s and the early 1990s, but otherwise they’ve seldom synced up their cycles of success to coincide with one another. That’s been especially true in the 21st century, when one franchise’s rise has seen the other’s fall, and vice-versa. 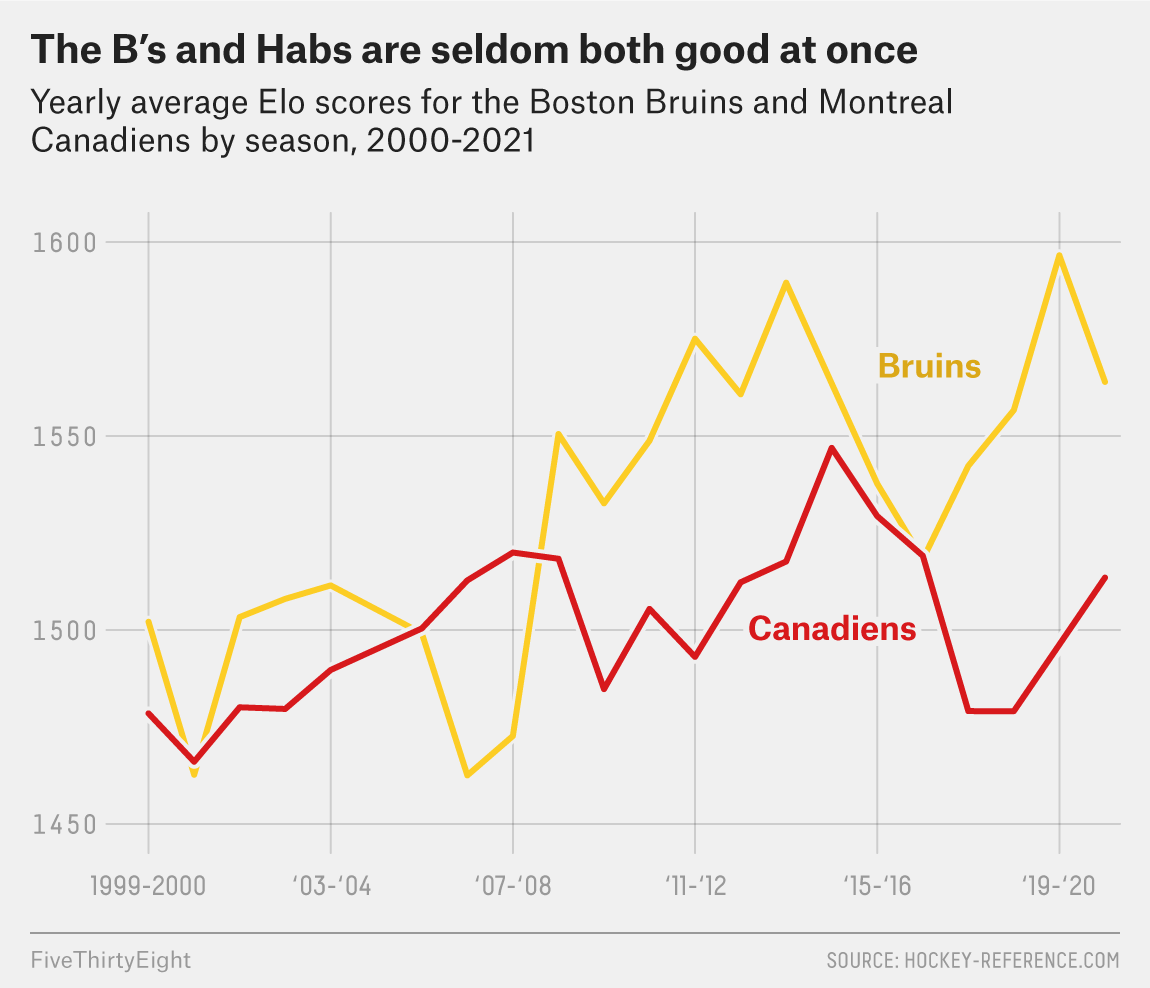 And while the Canadiens claim much of the historic dominance, the Bruins have been by far the better team for the past decade. They’ve played in three Stanley Cup Final series, winning one and coming within three victories of winning all three. In that same stretch, the Canadiens have only won four playoff series total, and haven’t advanced beyond the Eastern Conference finals. In a sign that the tides in the rivalry had shifted, the Habs even lost a Game 7 to the Bruins in 2011, as Boston marched to its first Stanley Cup triumph in four decades.

But both teams are looking good so far to start the 2021 season. Boston currently leads the East division while Montreal is close behind the Toronto Maple Leafs in the North. In our Elo ratings, the Bruins rank second and Montreal is 12th, but they are closer in terms of Cup odds — the Bruins are second at 13 percent, and the Habs are 10th at 4 percent. Either way, it’s been some of the best hockey both teams have simultaneously played this century.

Now, the aforementioned divisional realignment means the two teams won’t meet during the regular season for the first time in the nearly 100-year history of the rivalry. At the same time, a playoff meeting or — more specifically and dramatically — a Stanley Cup meeting is not out of the question. That’s right: There’s a chance (if only an admittedly small one) that the Bruins and Canadiens could rekindle their rivalry in the most dramatic fashion, on the game’s greatest stage. Specifically, according to our Elo simulations, there’s a 1.4 percent probability the Habs and Bruins meet for Lord Stanley’s mug, which ranks 16th among all potential matchups:

(It also ranks third among rematches of previous Cup finals, trailing only Boston-Toronto and 2019’s pairing of the Bruins and St. Louis Blues. Yes, Boston and Montreal did meet in those seven finals matchups all-time, though not since 1978.)

To be clear, the last season the Bruins and Canadiens — or any teams from the same conference — could meet in the Stanley Cup Final was 1980-81. But this year is weird and different in so many ways, and the Bruins and Canadiens are both very much on track for the playoffs. So it’s within the realm of possibility that they could meet in the Stanley Cup Final.

A 14 in 1,000 chance of seeing a Bruins-Habs final? Not great odds, sure, but not impossible either. If it happens, no one will remember that the Bruins and Canadiens didn’t meet during the regular season — and the rivalry may get nearly as heated as it was when Richard had his infamous run-in with the B’s 66 years earlier.

Confidence Interval: Will marijuana be legal across US by 2024? | FiveThirtyEight