The Pittsburgh Penguins have a new management dream-team in place, announcing Tuesday that they were hiring veteran executives Brian Burke and Ron Hextall to fill the void left when former general manager Jim Rutherford abruptly stepped down in late January. Together, Hextall and Burke have roughly a half-century of combined NHL front-office experience and have won two Stanley Cups. Meanwhile, the team they’re joining has won three Cups under captain Sidney Crosby since he arrived in Pittsburgh in 2005. Pedigree-wise, this is a championship-caliber match between franchise and leadership group.

But are the current Penguins a championship-caliber outfit? Though it’s a core headlined by Crosby, only eight players remain from Pittsburgh’s 2016-17 title roster, half of whom are now age 30 or older. Since winning that Cup, the Pens have taken a step backward with each successive season: losing in the second round in 2018, the first round in 2019 and the bubble-restart qualifying round in 2020. Off to a weak 5-5-1 start in 2021’s shortened schedule, and surrounded by better teams in the newly formed East division, Pittsburgh is suddenly running out of time to mount a bid for the playoffs at all, much less make a run at another Stanley Cup.

[Which Of The NHL’s Best Teams So Far Are For Real?]

We can trace the decline of the Penguins using our Elo ratings, which are updated every day and available on GitHub along with Elo-based playoff odds. While there have been plenty of ups and downs since Pittsburgh won the Cup in 2017, the franchise’s overall trajectory is unmistakably pointed in the wrong direction: 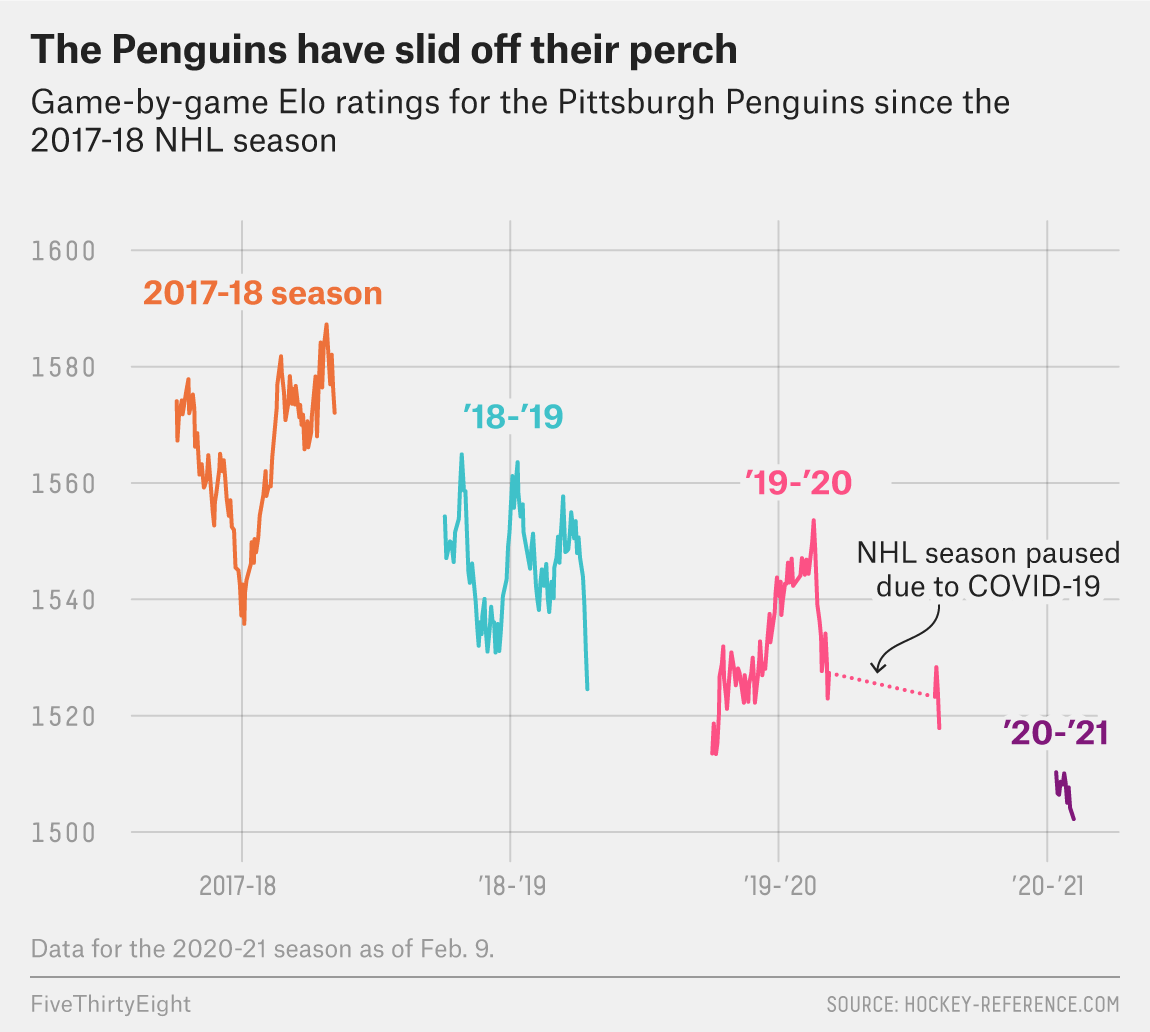 The Penguins went into their 2017-18 title defense with the best rating in the league — and while they dipped as low as seventh by midseason, they were back up to No. 2 on the eve of the playoffs. Once there, they fought hard — only losing to the eventual champion (and archrival) Washington Capitals in overtime of Game 6. Despite the defeat, Pittsburgh still had an all-time tandem in Crosby and Evgeni Malkin, plus the NHL’s 10th-youngest roster in 2017-18,1 and it went into 2018-19 as one of the league’s better teams.

But after an up-and-down regular season that saw Malkin and defenseman Kris Letang injured — a recurring theme for this team — Pittsburgh was unceremoniously swept out of the playoffs in the first round by the New York Islanders. And last year’s Penguins suffered horrible luck on multiple levels. First, they were once again among the league’s most injured teams. Then, after the season restarted from its COVID-19 hiatus, Pittsburgh was the biggest victim of the NHL’s improvised postseason format.

Under that new system, teams with the misfortune of ranking outside the top four seeds in their conference were forced to play an extra round to even qualify for the regular 16-team bracket. So despite ranking eighth in the league in Hockey-Reference.com’s Simple Rating System and 11th in Elo — with a 96 percent chance of making the Round of 16 under the pre-COVID format — Pittsburgh ranked fifth in the East, meaning it was tossed into the qualifying round against the Montreal Canadiens. Four mostly uninspired games later, the Penguins’ once-promising season was over.

Which brings us to this year’s team. Although there have been bright spots, such as the play of 21-year-old rookie defenseman Pierre-Olivier Joseph (5 points in seven games, +5 rating), the Penguins have started the season nothing if not flat. Malkin (6 points in 11 games, -2 rating) is on pace for 3.9 goals above replacement2 per 82 team games, which would easily be the worst season of his career; perhaps relatedly, Pittsburgh’s offense ranks in the middle of the pack in scoring and an uncharacteristically bad 23rd on the power play. Defensively, only the Ducks, Senators, Oilers and Sabres are allowing more of what Hockey-Reference classifies as “high-danger” chances per game than the Penguins so far. And goaltender Tristan Jarry, who was supposed to make Cup-winning backstop Matt Murray expendable after a strong 2020 season, has instead been making a great case for himself as the worst goalie in the league.3

Add it all up, and Pittsburgh’s current Elo rating of 1502 is the lowest for the franchise since Dec. 21, 2015 — 445 games and two Stanley Cups ago. The team is already fighting for its playoff life, with just a 37 percent chance to qualify for the postseason as one of the top four teams in the comparatively stacked East division.

Worse yet, its sense of urgency hasn’t appeared to kick in yet. Against the Islanders on Saturday, in a game that may well have featured the two teams most likely to be fighting for that fourth-place division seed, the Pens blew a 3-2 lead, with the game-winner by New York’s Anders Lee coming on the power play after Pittsburgh took a penalty late in the third period. In part as a result of that game, the Islanders have a 67 percent chance of making the playoffs, while the Penguins are tracking to be on the outside looking in.

Can that change? The Crosby-Malkin Penguins do have a history of extreme late-season surges. It’s ironic that the franchise’s previous low point came in the middle of the 2015-16 season, because Pittsburgh went a scorching 32-12-5 over the rest of that regular season and 16-8 in the playoffs, capping the turnaround with a Stanley Cup victory. A similar fate is not completely out of the question for these Penguins, with Malkin likely to play more like himself going forward, along with potentially improved performances on the blueline from Letang and John Marino (and maybe even in net from Jarry). According to PDO, which broadly measures how lucky a team has been, the Penguins have been one of the 10 least-fortunate teams early on in terms of their shooting and puck-stopping percentages at 5-on-5.

[Everything About Sports In 2020 Was Weird … Except Who Won]

But at the same time, a lot of what’s been bad about the 2021 Penguins so far would have to turn around all at once, on offense, defense and goaltending. It would have to happen without much financial wiggle room under the salary cap to make improvements, in a trading environment where almost a quarter of the league’s teams have to consider mandatory quarantines when dealing for players.4 And unlike that 2015-16 team, this year’s version doesn’t have the luxury of time to figure things out. After just 11 games, there are only 45 contests left on Pittsburgh’s docket — a slate that, while not overly difficult, isn’t especially cupcake-like either. (According to Elo, the Penguins have the 14th-most difficult remaining schedule of any team in the league.)

Maybe the Penguins have another run left in them with their current core of players. But more likely, the words uttered on a podcast in November by their new president of hockey operations will ring true: “I don’t think Pittsburgh is good enough to win,” Burke said at the time. “No matter what they do now with their cap situation, I think that window has closed, for me.” He hasn’t backed down from those quotes after being hired by the Penguins — and from what we’ve seen of this team so far, there might not be any reason to.