If the Scarlet Witch signs on with the Avengers in “Avengers: Age of Ultron” when it hits theaters this Friday, she’ll be gently nudging the on-screen adaptation of the superhero team toward the relatively diverse team we see in the comic books.

The comic book Avengers aren’t a paragon of gender equity or diversity, but they’re not half bad compared to the world they’re operating in. Mainstream superhero comic books have had, generally speaking, a mediocre history of incorporating women in meaningful and non-objectifying ways. The situation is improving, and the Avengers have tended to be better at bringing women into the fold than their universe as a whole.1

Just like the on-screen team in “The Avengers” (2012), the comic book version of the team had six founding superheroes, just one of whom was female. Over time, that ratio has edged closer to parity. Below, I’ve charted the cumulative gender composition of the team in the comic books.2 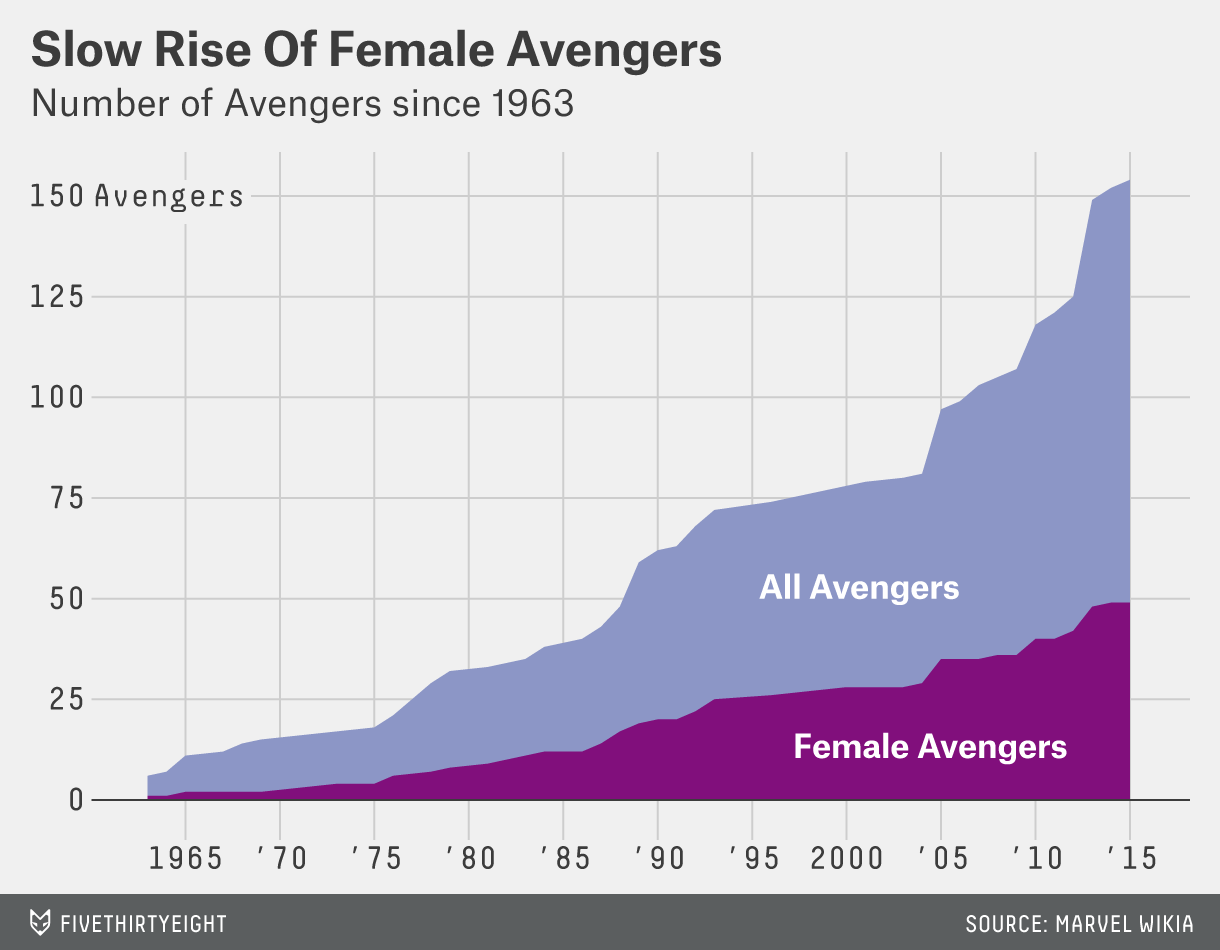 In the first five years of the team’s operation, the Avengers hovered between about 14 percent and 18 percent female, but in its 10th year, the roster of current and former Avengers was about a quarter women. They were ahead of their time! It was 1973 when the Avengers hit the one-fourth mark, a threshold that the entire mainline Marvel comic book universe wouldn’t reach until 2011.

By the time the squad was 20 years old, about a third of its members had been women. But the team stubbornly remained at that level for the next 21 years. This isn’t because the group wasn’t expanding, either: In those 21 years, the roster of Earth’s Mightiest Heroes nearly tripled in size.3

While men seriously outnumber women on the Avengers team in the comic books, the on-screen team is way worse. I haven’t seen the movie yet, but let’s say the three newcomers — Scarlet Witch, Quicksilver and the Vision — join up and the team otherwise remains unchanged. That’ll mean that 22 percent of the movie Avengers are women. The last time the comic book Avengers were that heavily male was in 1975.

There are definitely opportunities for the movie team to welcome new women. There’s a Jessica Jones Netflix show in the works and a Carol Danvers movie in the pipeline, and while it hasn’t yet operated as a minor league for the Avengers movies, the ABC show “Marvel’s Agents of Shield” could still very well promote one of its female supers to the big leagues.