This Friday, “Avengers: Age of Ultron” hits theaters, and three new faces will join the team: the Scarlet Witch, Quicksilver and the Vision.1 These characters are Avengers mainstays in the comics, with a combined 146 years of involvement with the team, and are among the most prominent characters in the mainline Marvel comic book universe.

So the obvious question becomes: Who’s next to join the Avengers squad in the Marvel cinematic universe (MCU)?

One way to try to answer that question is to look at the most commonly appearing Avengers in the comics, which I pulled from the Marvel Wikia page.2

Here are the top 15 characters by appearance count:3 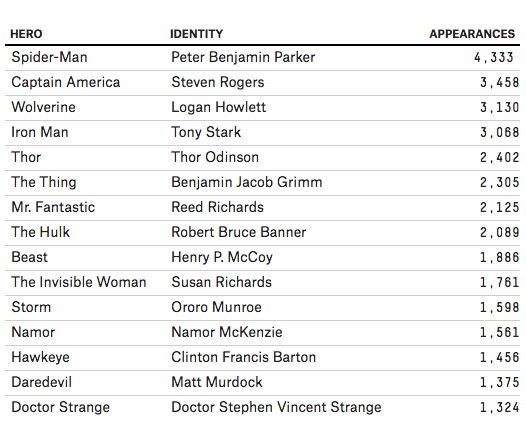 A lot of familiar faces! We’ve got most of the squad from the movies here. But this basic ranking isn’t a great way to tell who is likely to get a coveted Avengers membership card in the MCU. 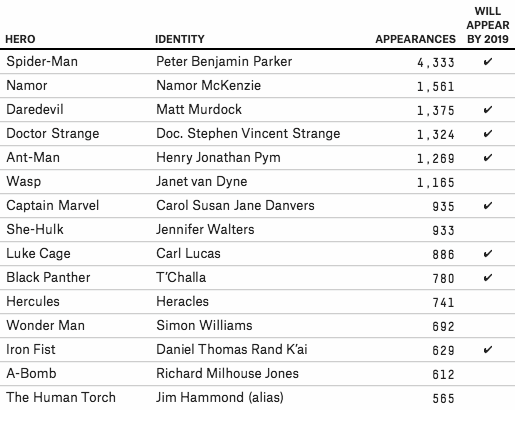 Many of these characters are already slated to have their own entries in the universe. Spider-Man, Doctor Strange, Ant-Man, Captain Marvel and Black Panther all have movies queued up between now and the end of 2019. Moreover, Marvel has a deal with Netflix to produce several MCU-based televisions shows. Daredevil already has a Netflix show, and Luke Cage and Iron Fist will soon follow on the small streaming screen. Maybe they’ll wind up on the big screen at some point.

Namor. The rights to Namor — one of the oldest Marvel characters — are “complicated,” so while it’s plausible that we could see him in a movie, sorting out the legal issues may just be too much work to do for a character that doesn’t have immense name recognition.5

Then comes Janet van Dyne, a.k.a. Wasp, a founding Avenger who’s the ex-wife of Hank Pym. Pym will appear in the forthcoming “Ant-Man” movie, but it’s not yet clear if van Dyne will live and breathe in the MCU.6

Then we get to Jennifer Walters, or She-Hulk, the attorney cousin of Bruce Banner. She-Hulk has been a presence in the Avengers since the early 1980s, and Marvel owns the rights to her entirely. She may be the next major addition to the MCU. What’s more, the She-Hulk just had an acclaimed run of her own in the comic books.

In short: She-Hulk in 2020. I’m calling it. Let’s get a police procedural with She-Hulk working in the district attorney’s office. Or at least a cameo in Daredevil. Sure beats a Wonder Man movie, if you ask me.