Mass shootings sadly seem to be almost a routine part of American life — as do the post-shooting rituals. As we mourn the nine people killed Wednesday night in Charleston, South Carolina, the conversation has already turned to politics and gun control. Most Republicans don’t want to talk about it. Some Democrats, most notably President Obama, do. In the end, public opinion and congressional politics will probably keep gun control legislation from becoming law any time in the near future.

Americans have turned against gun control over the past 25 years. We can see this clearly in Gallup’s data since 1990 and the Pew Research Center’s data since late 1993. 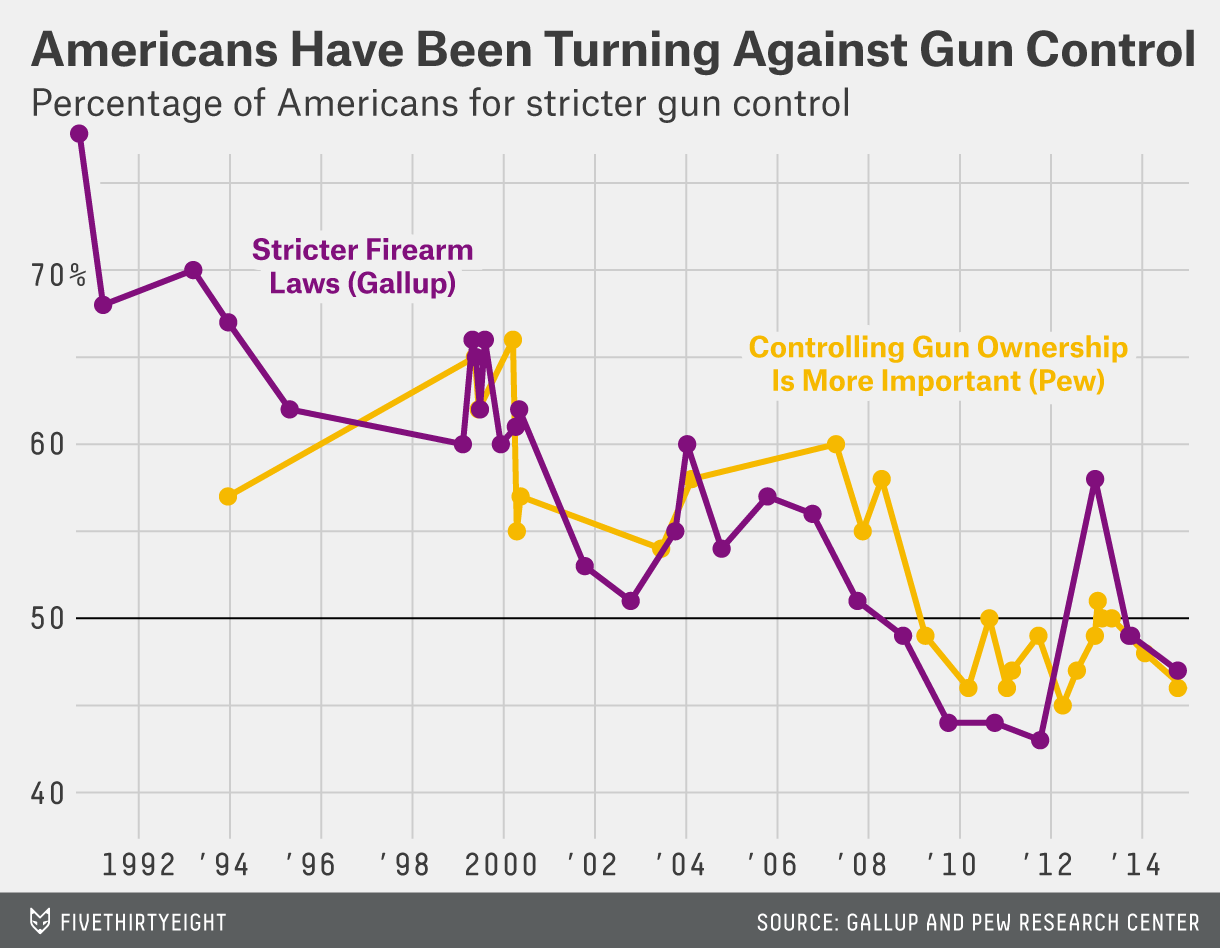 Americans clearly wanted stricter gun control during most of the 1990s. Even through 2007, a majority of Gallup respondents always answered yes to “more strict” gun control. Since that point, however, the position in favor of gun control failed to get a majority in every poll except one, a survey conducted after the mass shooting at Sandy Hook Elementary School in Newtown, Connecticut. Pew’s polling shows the same trend: Through 2008, a majority of Americans said it was more important to control gun ownership than protect gun owners’ rights. The only majority since then for controlling gun ownership came after Newtown.

You’ll note that there was also a clear rise in the percentage of Americans in favor of curbing guns after the Columbine High School shooting in 1999 in Colorado. What made Columbine and Newtown different from other mass shootings? There were a lot of deaths of young Americans at an elementary or high school, and the media paid much more attention to those massacres. As George Washington University’s Danny Hayes has pointed out, media mentions of “gun control” rose after Newtown to an extent they didn’t for other recent tragedies. 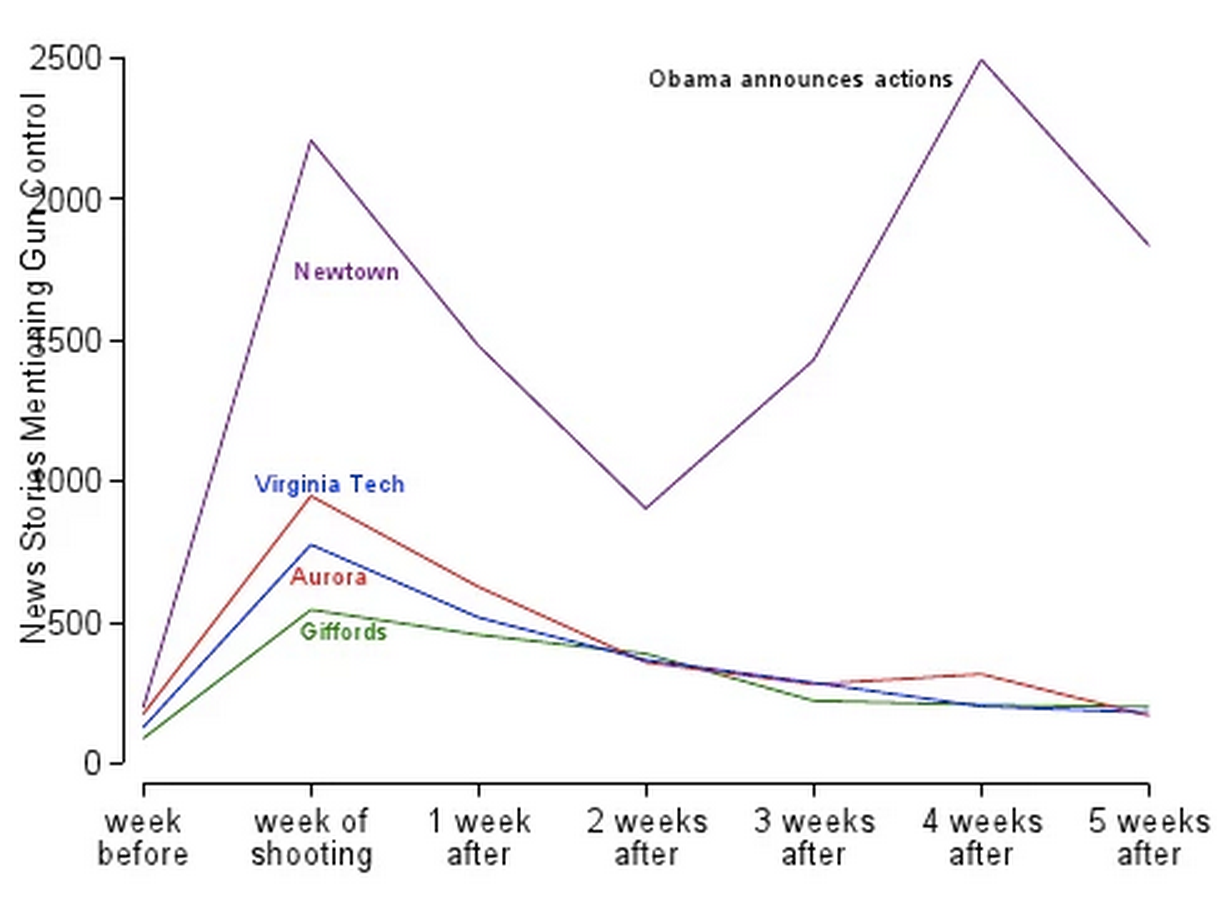 After a while, though, the media moves on, and the long-term trend against gun control continues. We saw this clearly after the Newtown mass shooting.

Still, after Newtown, Congress made a serious attempt at passing anti-gun legislation. Could Charleston have a Newtown-like effect on media coverage and public opinion, making it possible for a gun control bill to pass Congress? Obama seems ready to use his bully pulpit, as he was after the Newtown shootings. He argued Thursday that the United States was unique for its mass shootings and that “it is in our power to do something about it.”

Yet, Obama has tried to use his bully pulpit before without success. In 14 previous statements after mass shootings, Obama has called for taking action half the time. Four of the 14 times (and Newtown was not one of them), he specifically mentioned gun control. 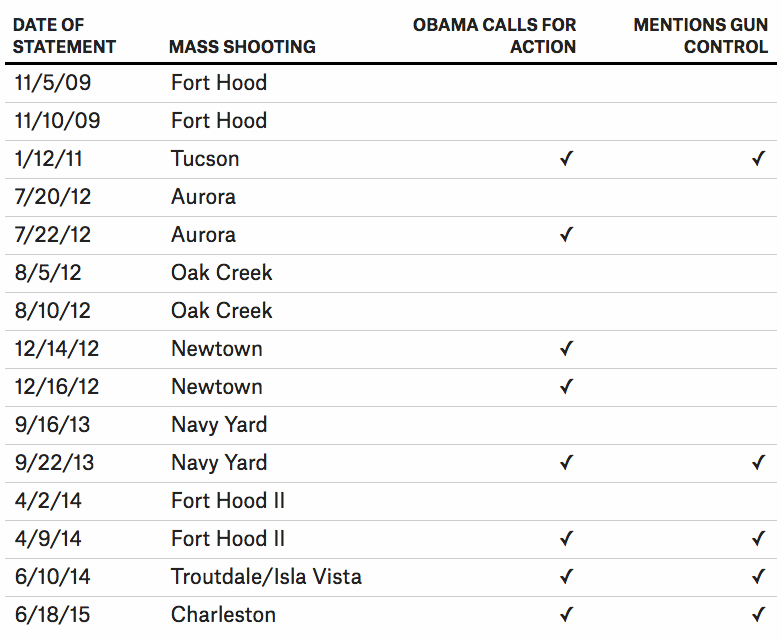 We didn’t see a shift in national opinion after the shootings in Tucson, Arizona; Aurora, Colorado; Fort Hood, Texas; the Navy Yard in Washington, D.C., or Isla Vista/Troutdale in California and Oregon.1 In other words, whether Obama talks about gun control is not a good barometer of public opinion or congressional action.

Even if we saw a Newtown-style public opinion spike for more gun control, the political realities would make it nearly impossible for such legislation to go anywhere. The Senate is now firmly in Republican control; Democrats controlled 55 seats during their failed attempt to pass gun legislation in 2013. The House is even more impossible: Democrats hold just 188 seats out of 435. (And again, many Democrats haven’t and won’t vote for a bill that curtails guns.)

The 2013 vote is instructive. Almost every Republican voted against the highest profile piece of gun control legislation, an amendment proposed by Sen. Joe Manchin III, Democrat of West Virginia, to institute national background checks. Background checks had overwhelming public support nationally. And yet, a handful of Democrats also voted against the measure. Those Democrats represented red states, where gun ownership rates are high. Most of the nation’s pro-gun-control sentiment is centered in cities, but the nature of House districts and the structure of the Senate give disproportional power, in terms of population, to rural areas that tend to oppose new gun restrictions.

Try as he might, Obama doesn’t have much of a chance of persuading Congress to pass any gun control package. And without Congress, there isn’t a lot the president can do. Obama himself acknowledged as much. After saying it was within Washington’s power to pass gun control legislation, Obama added, “I say that recognizing the politics in this town foreclose a lot of those avenues right now. But it would be wrong for us not to acknowledge it.”