Did the senators who voted against a proposal last week to expand background checks on gun buyers take an electoral risk?

At first glance, it would seem that they did. Background checks are broadly popular with the public. Overwhelming majorities of 80 to 90 percent of the public say they favor background checks when guns are purchased at gun shows, at gun shops or online. Support for background checks drops when guns are bought through informal channels, or gifts from family members — but the amendment that the Senate voted upon last week, sponsored by the Joe Manchin III, Democrat of West Virginia, and Pat Toomey, Republican of Pennsylvania, would have exempted most of these cases.

And yet, the Senate did not behave as though this was a piece of legislation favored by 80 percent or more of the public. The analysis that we posted last week suggested that, if anything, senators who are up for re-election in 2014 were less likely to vote for the bill.

It’s worth considering in more detail how the senators’ re-election status might have affected their votes. Doing so yields a more subtle conclusion than we’d reached initially. Senators who are up for re-election in 2014 were more sensitive to attitudes toward gun-ownership in their states. However, this influenced behavior in both directions. Senators running for re-election were especially likely to vote for Mr. Manchin’s amendment if they represented states with low rates of gun ownership, but especially unlikely to do so if they came from states where gun ownership is common.

This can be seen in the chart below. Among the 26 incumbent senators who will face elections next year (this definition excludes those senators who have announced their retirements), there was a near perfect relationship between the states’ rates of gun ownership and their votes. Among the 12 senators running for re-election in states where the gun ownership rate is below 42 percent, all but one (John Cornyn of Texas) voted for Mr. Manchin’s amendment. Among the 14 senators running where the gun ownership rate is above 42 percent, all but one (Mary Landrieu of Louisiana) failed to do so. 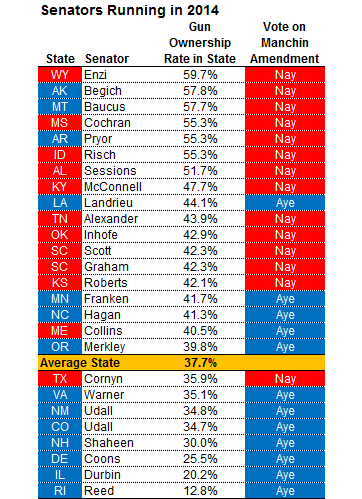 The senators who are not up for re-election next year were still modestly sensitive to the gun-ownership rates in their states, but were more likely to override this for partisan or ideological considerations. Among this group, 14 senators voted against Mr. Manchin’s amendment despite the gun ownership rate being under 42 percent in their states. (All of these were Republicans except for Harry Reid of Nevada, the Democratic majority leader, who voted against the amendment for procedural reasons.) Conversely, eight senators (all Democrats) voted for the amendment despite gun-ownership rates above 42 percent in their states — including four of the five Democrats in states where the gun ownership rate exceeds 50 percent.

The same data is presented in another way in the chart below, which reflects the results of a logistic regression analysis on the two groups of senators. (Mr. Reid, because of his procedural vote, is not considered in the analysis.) The chart illustrates the conclusion we had reached before: senators up for re-election in 2014 were much more sensitive to the gun-ownership rates in their states, and it represented a much clearer predictor of their votes. 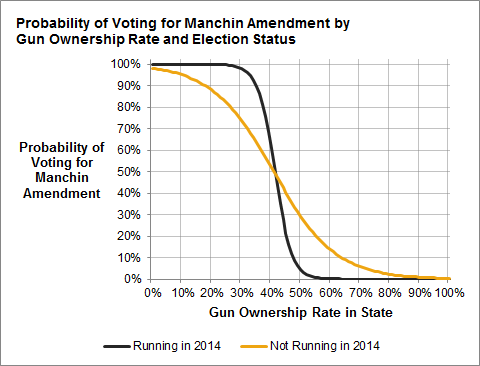 But while this provides a useful description of how the senators voted, it does not address the question that we posed initially. Were the senators who voted against background checks taking an electoral risk by doing so? Some states, certainly, are more resistant to laws that would restrict gun ownership. Nevertheless, if as much as 80 or 90 percent of the public supports background checks like the ones Mr. Manchin proposed, the bill would be reasonably popular even in states where gun ownership is common.

Sean Trende, of Real Clear Politics, published a series of arguments on Monday that helps to explain the dilemma. At the core of Mr. Trende’s thesis is the idea that the public might not view Mr. Manchin and Mr. Toomey’s amendment quite so literally as the polls imply. Instead, they might view it as a proxy for the senator’s overall attitude toward gun regulation and gun rights — without worrying so much about the details. Polls that ask the public about their broader view toward gun regulation find much more equivocal results. A related consideration is that the National Rifle Association will score the vote on background-checks amendment — so a vote for it could have harmed a senator’s overall record on gun rights as judged by the N.R.A.

A counterargument is offered by Nate Cohn of The New Republic, who suggested that the N.R.A.’s power to influence elections may be overblown — or at least that it shouldn’t outweigh other electoral considerations when a bill as apparently popular as Mr. Manchin and Mr. Toomey’s amendment comes up for a vote.

Whether Mr. Trende or Mr. Cohn is right is something of a judgment call, but it is easy enough to split the difference between them. Mr. Trende is correct that some members of the public may look beyond the literal text of the legislation in deciding how they feel about a bill — either because they are poorly informed about what it does, or because they will attribute symbolic importance to a vote. (He cites the Democrats’ health care bill in 2009 and 2010 as one example: many individual components of the bill polled fairly well, but the overall legislative effort did not.) But even if this is true for many members of the public, it would take a lot to counteract 80 or 90 percent face-value support.

My view, in other words, is that polls showing 90 percent support for background checks will tend to overstate how
well the Democrats’ position might play out before the electorate in practice, though public opinion was on their side on this vote.

Moreover, few of the Republican senators who are up for re-election in 2014 are vulnerable for any reason. Only one, Susan Collins of Maine, comes from a state that Barack Obama carried, and she voted for Mr. Manchin’s bill.

In fact, the safety of the Senate Republicans may have enabled them to vote against the amendment, at least in part, for a tactical reason: to protect their colleagues in the House. This is not to suggest that Republicans are likely to lose the House — but there are 17 House Republicans in districts carried by President Obama last year. By preventing the background-check bill from securing the 60 votes necessary to pass the Senate, the Republicans may have prevented their House counterparts from having to take a tough vote.

Thus, Democrats are not in much of a position to capitalize on the vote from the standpoint of individual seats in Congress in 2014. To the extent that the issue plays favorably for Democrats in 2014, it is likely to be for symbolic reasons — because they are able to persuade voters that it reflects a Republican Party that is outside the mainstream.

This is not necessarily a hopeless strategy — particularly if Democrats can weave the background-check vote into a broader narrative about the Republican Party having become too conservative. But it does mean that, from an electoral standpoint, the symbolic implications of the vote outweigh the substantive ones. For Democrats to have much of a chance to win back the House — bucking the historical trend of the president’s party faring poorly in midterm years — the Republican Party will first and foremost have to be perceived as out-of-touch on the economy.