U.S. employers added 142,000 jobs in August, the slowest pace of job growth since December and far below most economists’ expectations. That’s a reason for concern. It isn’t a reason to panic.

Let me be clear: The monthly jobs report, released Friday by the Bureau of Labor Statistics, was a disappointment. Some months, the headline figures are misleading, hiding a more complex picture beneath the surface. This wasn’t one of those months. Pretty much every number in the report — from the labor-force participation rate (down), to hours worked (flat), to hourly pay (up, but not by much) — painted the same discouraging picture. What’s more, the government revised down its estimate of job gains in past months by a combined 28,000, suggesting the recent run of strong growth wasn’t quite as strong as previously thought.

Still, it’s important to keep Friday’s disappointment in perspective. The report paints a picture of a job market that’s healing a bit more slowly than it was in the spring, but that’s still healing nonetheless. Unemployment, and particularly long-term unemployment, continued to fall. Fewer people were working part time because they couldn’t find full-time work. The construction sector, a source of good-paying jobs and a frequent bellwether for the economy, showed its second-consecutive month of strong gains.

Moreover, monthly jobs numbers are notoriously volatile. It’s too soon to know whether this was a one-month blip or, for that matter, a statistical oddity that will be revised away in coming months. (The margin of error on the headline payroll figure is about 90,000 jobs.) It pays to focus on the longer-term trend, which shows steady, though not accelerating, growth. 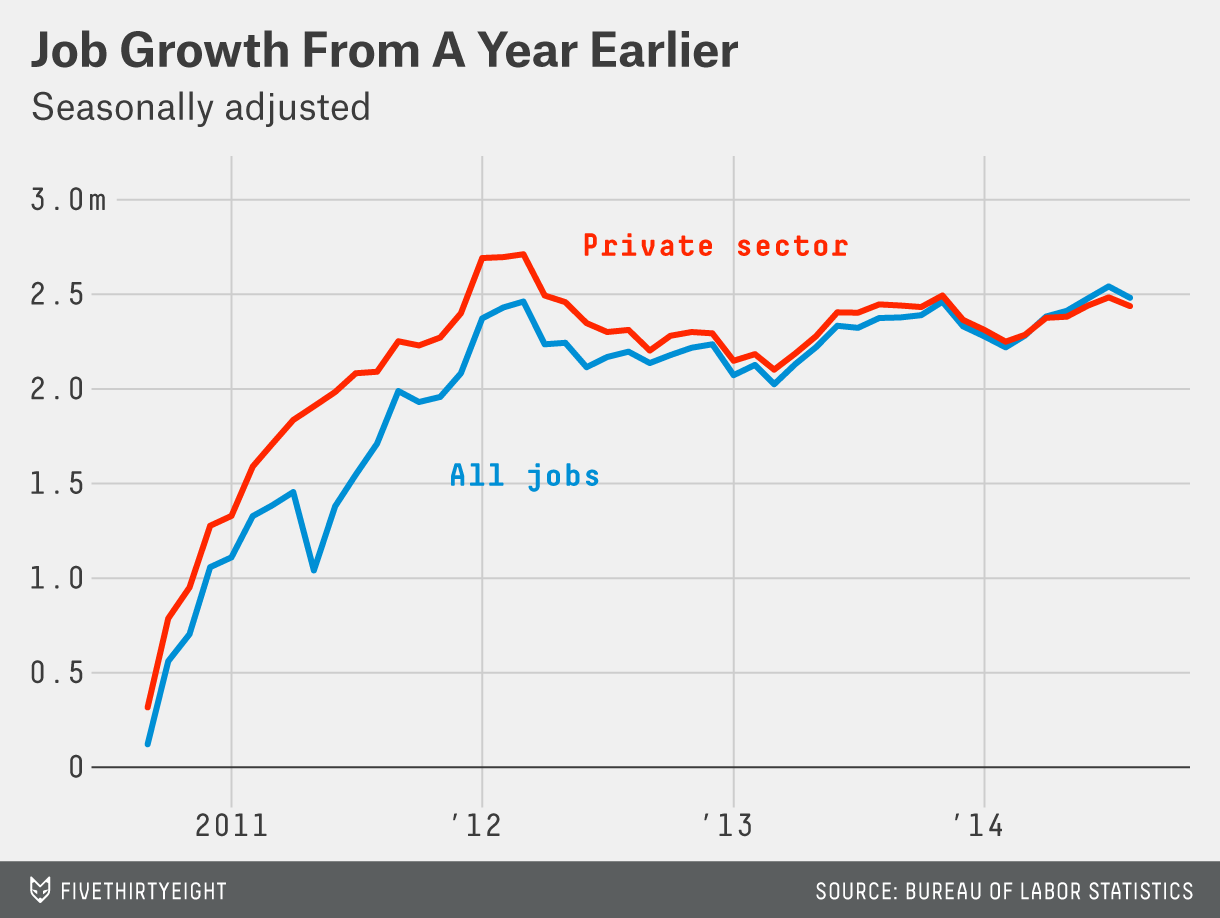 Policymakers at the Federal Reserve will be playing this same game of “on the one hand, on the other hand” at their meeting this month. Fed Chairwoman Janet Yellen and her colleagues have been trying to figure out whether the labor market is still struggling — and therefore needs continued stimulus — or is nearing normal levels, in which case the Fed needs to start pulling back its stimulus efforts to avoid inflation. Yellen has been firmly in the “still struggling” camp, and although Friday’s report won’t come close to settling the debate, it will give her a strong piece of evidence that the economy isn’t yet in danger of overheating.

Here are a few more observations from Friday’s report: 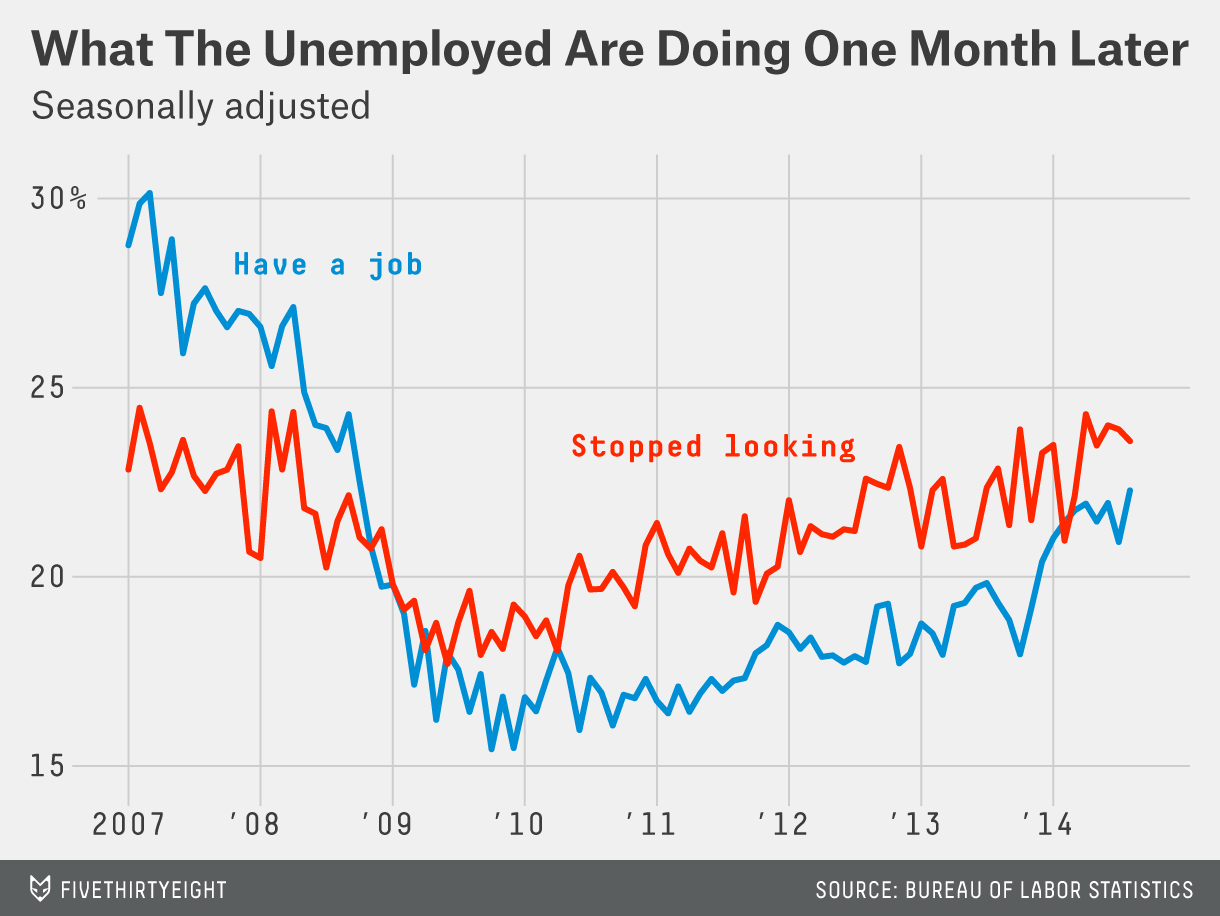 But some signs of an improving labor force: The labor force participation rate (the share of the adult population that’s either working or actively looking for work) fell slightly in August and is near a three-decade low. But much of that decline is due to an aging population. If we instead focus on the share of the prime-age population (those between ages 25 and 54) who are working, there have been signs of improvement. Meanwhile, the number of people who want a job and are available to work but have stopped looking — the “marginally attached” in econ jargon — has been falling. That suggests that fewer people are on the sidelines involuntarily. 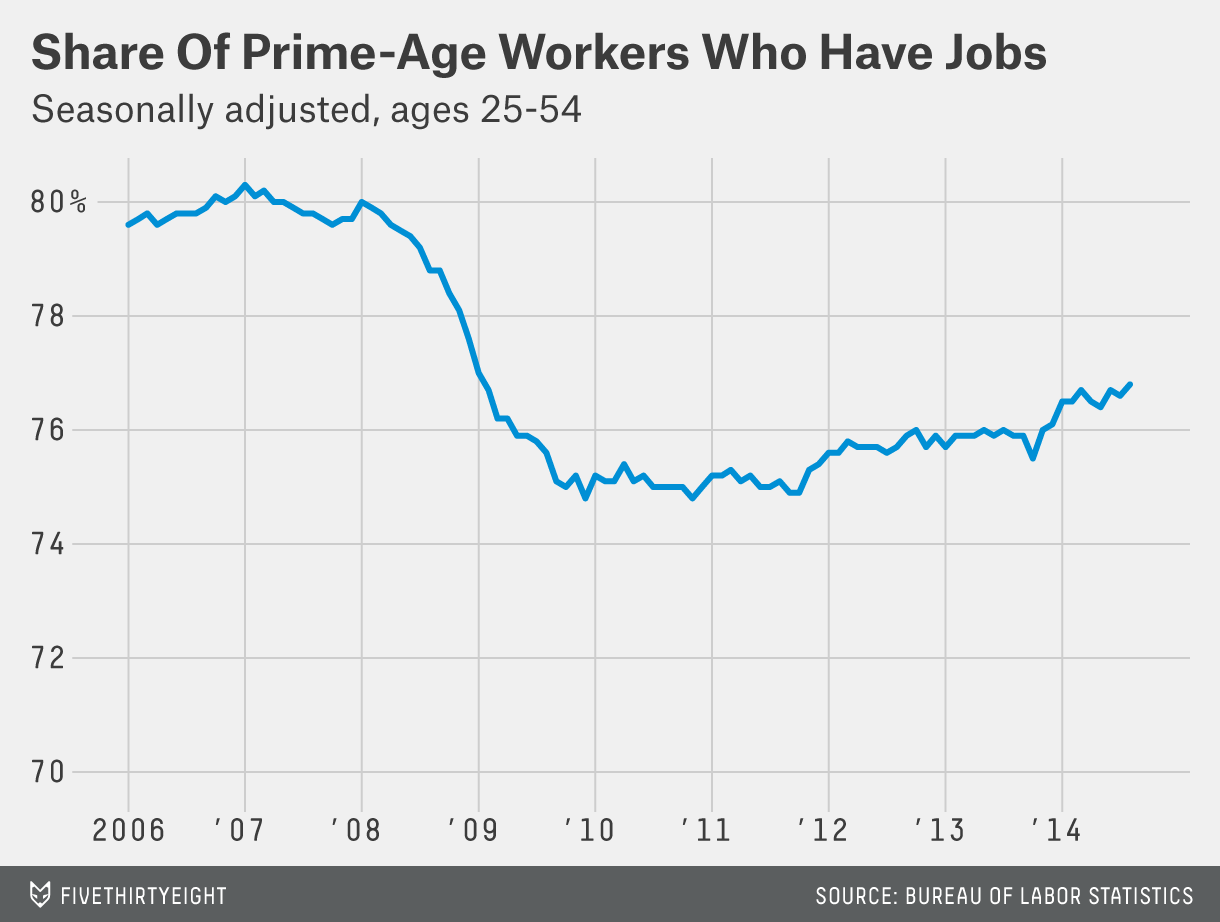 Little sign of an acceleration to come: Not only did employers pull back on hiring in August, there’s little sign they’re about to pick up the pace. For the fifth month in a row, the average workweek was unchanged at 34.5 hours. Average wages were up 6 cents an hour in August and are up 2.1 percent over the past year. Flat hours and anemic wage growth suggests employers aren’t seeing a surge in demand. On the other side of the hiring equation, the number of people entering the job market to look for work fell, suggesting would-be workers aren’t becoming more confident about their prospects.

Mixed bag on job quality: In recent months, there have been some tentative hints that the quality of jobs has been improving, not just the quantity. Friday’s report didn’t provide strong evidence in either direction. Good-paying sectors such as construction and health care added jobs, but manufacturing employment was flat. About a fifth of August’s job growth came from the low-paying hospitality and temporary-help sectors. Retail employment, meanwhile, posted an unusual decline, but the Labor Department said this was at least partly due to the work disruption at Market Basket stores in New England.