Yes, the jobs recovery is real.

For much of the five years since the recession ended, the job market has been stuck somewhere between disappointing and terrible. Employment was rising, but wages were stagnant. Unemployment was falling, but mostly because people were giving up looking for work. Hiring would accelerate for a month or two, but would quickly lose that momentum.

But in recent months, something has changed. On Thursday, the Bureau of Labor Statistics reported that U.S. employers added 288,000 jobs in June and the unemployment rate fell to 6.1 percent, its lowest level since September 2008, the month Lehman Brothers’ bankruptcy sparked a global financial crisis. The U.S. has added 1.4 million jobs so far this year, making it the best half-year since the recession ended. Payrolls are up by 2.5 million over the past year, also the best mark of the recovery. 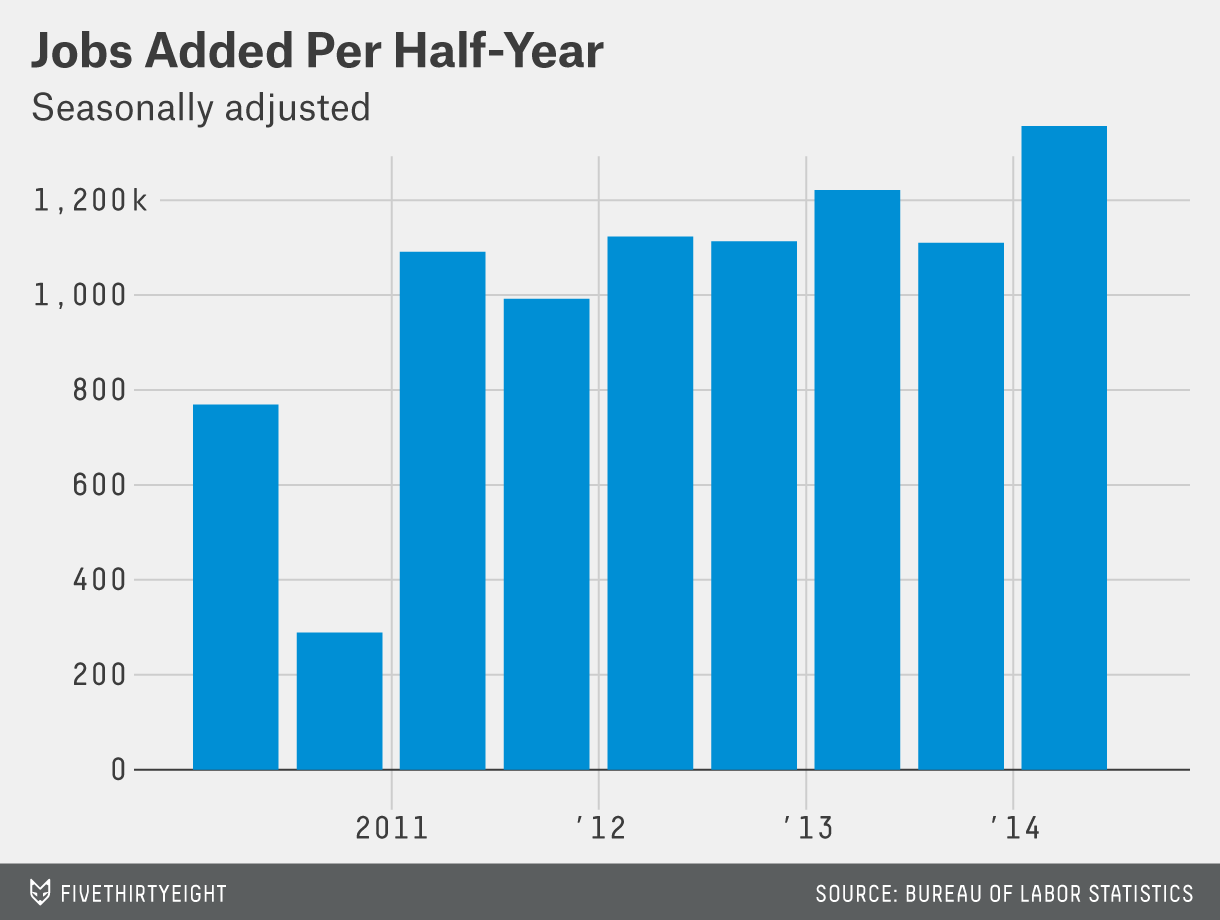 The June data is preliminary, and will be revised at least twice in the coming months. But for once, pretty much all the evidence in the report points in the same direction. The household survey — a separate government tally of employment based on a survey of individuals rather than businesses — showed equally strong job gains. Hiring was broadly distributed across industries, and average hourly wages were up six cents in June for the second month in a row. The share of the population that’s working, a measure known as the employment-population ratio, ticked up to 59 percent, its highest level since August 2009 (though still down significantly from its prerecession mark of nearly 63 percent). 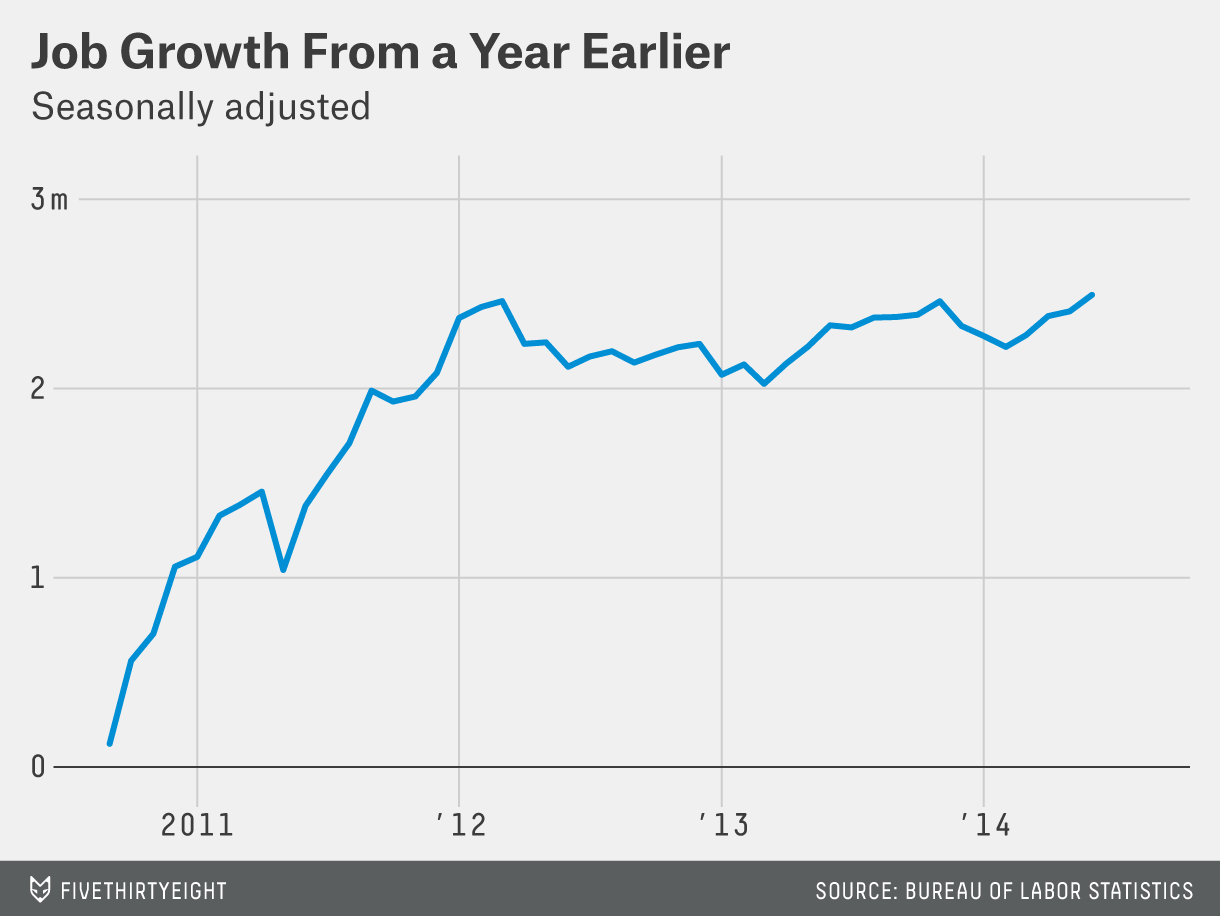 As always, there are caveats. June’s employment gains were mostly in part-time jobs, and the number of people working part time because they couldn’t find full-time work rose by 275,000. Much of the job growth was concentrated in low-paying sectors, such as restaurants and retail, while hiring in the better-paying construction sector continued to lag. The number of people out of work six months or more fell to a five-year low, but, at least as of May, not because the long-term unemployed were actually finding jobs.

Then there is the elephant in the room: the state of the broader economy. Just last week, the government reported that gross domestic product, the broadest measure of goods and services produced in the economy, shrank at a 2.9 percent rate in the first three months of the year — something that has previously happened only either during a recession or immediately before one. The second quarter so far has looked better, but probably not by enough to make up for the awful start to the year.

The seeming disconnect between jobs and GDP isn’t necessarily as strange as it may seem on the surface. Quarterly GDP figures are volatile, subject to all sorts of statistical oddities and one-time effects; there’s little reason to think the lousy first quarter report represents a major slowdown in the economy. Still, it’s unlikely the recent pace of job growth can continue without better economic growth. Right now, most economists think GDP will catch up to hiring, rather than hiring slowing down to meet GDP. But they’ve been overly optimistic throughout the recovery.

Wages are up but hours are flat: Average earnings are up 48 cents an hour over the past year, a 2 percent increase. That probably means wages were roughly flat after adjusting for inflation. (We’ll get June inflation data later this month.) Meanwhile the average workweek — the number of hours worked by the average hourly worker — was flat for the fourth consecutive month. Taken together, the earnings and hours figures suggest employers still aren’t having much trouble finding workers; if they were, they’d be boosting pay or asking their existing employees to work longer hours.

Better odds for the unemployed: About 22 percent of the unemployed found jobs in June, the highest share of the recovery. But for the 49th time in the past 50 months, more jobseekers gave up looking than found work. The numbers make it hard to get a clear read on whether the unemployed are becoming more optimistic. The number of “discouraged workers” — people who aren’t actively looking for a job because they don’t think they can find one — is down sharply over the past year. But fewer people are rejoining the job market to look for work, and the share of the population that’s working or looking for work remains at a three-decade low. 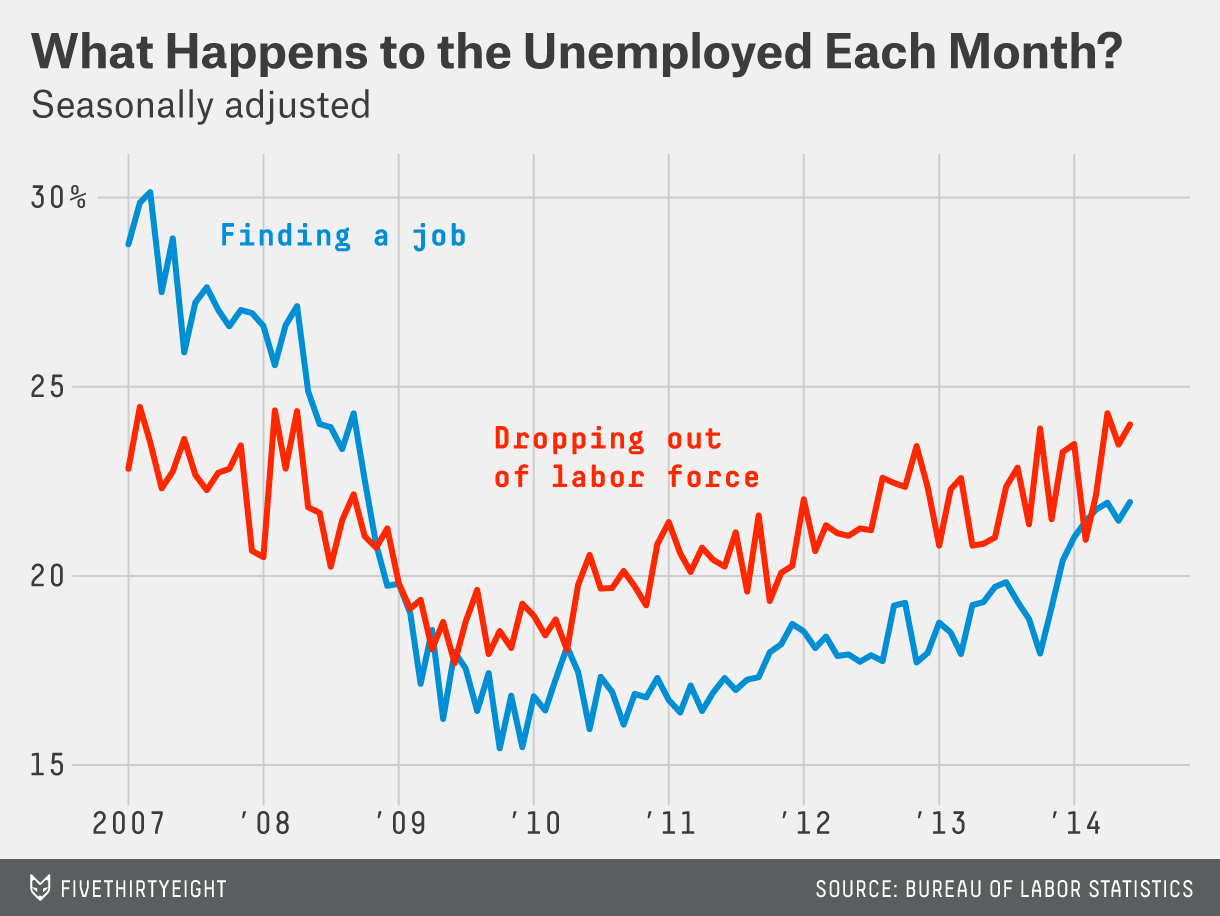 Broad job growth: Public-sector job cuts have been a significant drag on the jobs recovery, but that trend may at last be reversing. The government added 24,000 jobs in June, with local school districts providing the bulk of the increase. In the private sector, gains were widespread: The health care sector added 34,000 jobs, retailers added 40,000 and manufacturers added 16,000. The “diffusion index,” a measure of how broad job growth is across the private sector, rebounded in June after falling in May.

Good signs in the revisions: In addition to the June data, the Bureau of Labor Statistics also revised up its April and May estimates by a combined 29,000 jobs. That’s a good sign because the government tends to revise up its estimates during times of accelerating growth (and revise them down when hiring is slowing). Still, it’s worth remembering that all Thursday’s figures have significant margins of error, and many will be revised.