The best rivalry in professional men’s1 tennis history continues to unfold — and it isn’t Roger Federer against Rafael Nadal.

Federer and Nadal are probably the best players of all time.2 They may have played the best match of all time. But their head-to-head history is mostly predictable and one-sided. It’s better than nearly every rivalry that came before it, yet it’s not even in the top two current matchups.

Nadal’s rivalry with Djokovic, the current world No. 1, is much better. Nadal and Djokovic have met 42 times, more than any other pair since the sport went pro in 1968, according to data provided by Jeff Sackmann of Tennis Abstract. From September 2010 through June of this year, Nadal and Djokovic have played a remarkable 21 times,3 including in seven major finals, and have contested several classics. But they’ve also played many duds. And while their overall record is nearly even, the rivalry breaks down into several lopsided sub-rivalries: Nadal dominates on clay (14-4), Djokovic on hard (14-7). Nadal won 14 of their first 18 matches; Djokovic has won 15 of 24 since.

Compare that to the running feud that is Federer vs. Djokovic. They have been playing close matches since their first meeting after Djokovic’s 20th birthday, when Djokovic won in a winner-take-all third-set tiebreaker. Since then, neither man has won more than three of the matches between them in a row. They’ve been even on every surface: 1-1 on grass, with Federer holding narrow leads of 4-3 on clay and 14-13 on hard courts. Djokovic is 6-4 in finals, Federer 11-10 in semis. They’ve split their 12 Grand Slam matches. They could meet for a 37th time in the World Tour Finals, the year-end event featuring the tour’s best players that ends Sunday in London.

These are three of the sport’s greatest rivalries ever, and they remain very much alive, with the three participants currently holding the three top spots in the rankings. The continuing drama of these rivalries owes to the greatness of the trio, the happy coincidence that Nadal and Djokovic were born a year apart and the stubbornness of Federer, sticking around at age 33 to keep challenging his younger rivals. 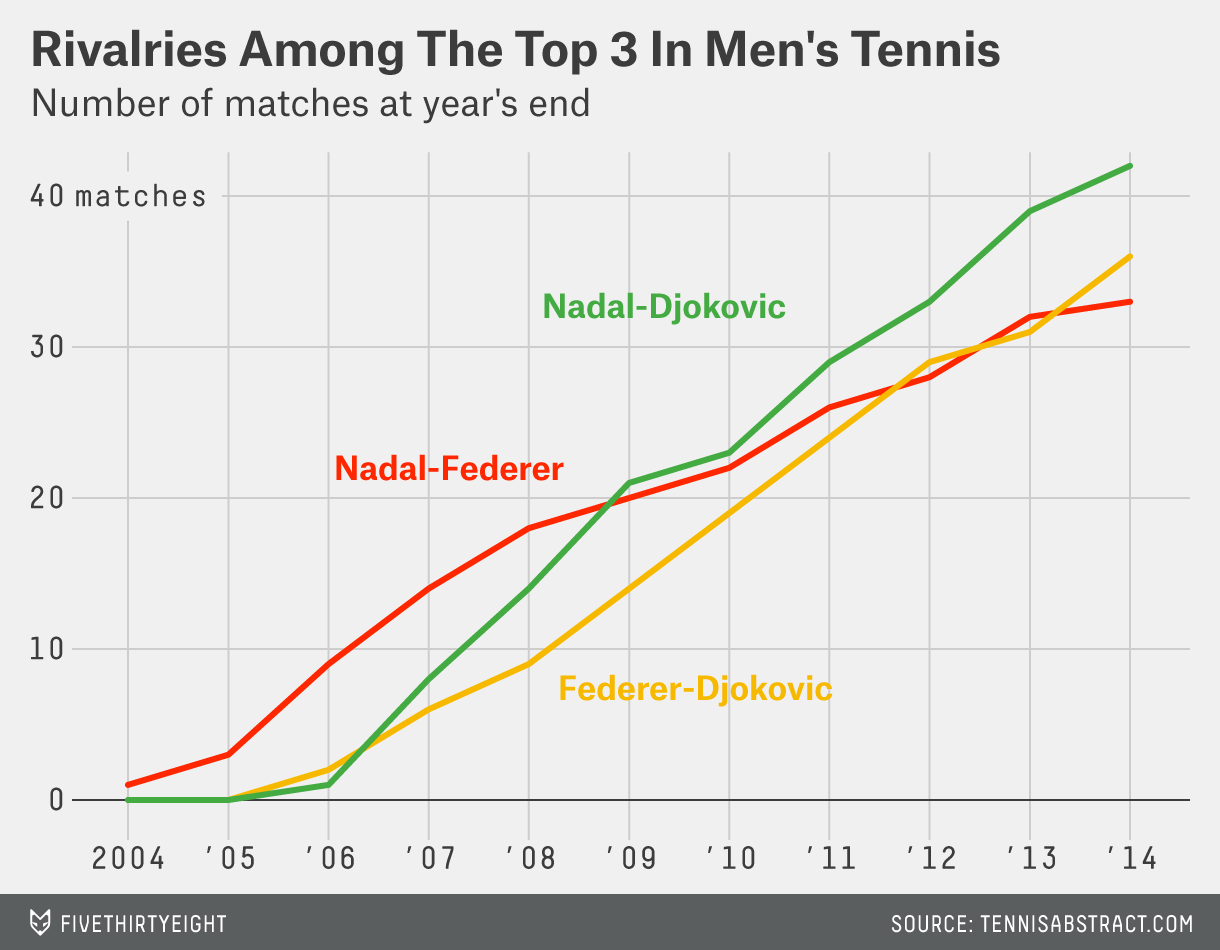 Federer-Djokovic provides plenty of intangible pleasure for neutral fans. Each can defend but prefers to play the aggressor, making for quick reversals and for many unpredictable points. Federer has one of the sport’s most effective serves ever. It has a mighty foil in Djokovic’s possibly best-ever return. Federer’s rekindling of his love for the serve-and-volley raises the tension.

Many of their matches have been meaningful and memorable: Federer’s French Open win to break Djokovic’s 43-match winning streak in 2011 was bookended by two Djokovic wins in U.S. Open five-set semifinals after saving match points in 2010 and 2011. Their final this July at Wimbledon was about as high in quality and excitement as Nadal’s more celebrated win over Federer at Wimbledon in 2008.

The statistical side of ranking a sport’s best rivalries is necessarily arbitrary. There is no single, universally accepted way to assess matchups, but here is what we can safely look for in a great rivalry: Frequent, competitive matches in significant situations. Just as the world’s best player probably isn’t best at every shot but must be really good at each one, the Federer-Djokovic rivalry doesn’t rule each category but it’s strong in all of them.

Let’s take them in turn.

Nadal-Djokovic is the most common meeting among men’s tour players since 1968. Federer-Djokovic ties for second; its next edition will push it past Ivan Lendl-John McEnroe. Nadal-Federer ranks eighth.

Fedal, as fans call it,4 ranks higher for total significance of matches. Of their 33 meetings, 20 have come in finals — double the number of Federer-Djokovic finals.

After Federer’s match Sunday in London, I asked him to compare his rivalries with Nadal and with Djokovic. He ranked his Nadal tussles higher because of all the finals they’ve played. “I know Novak, the matches and the rivalry is nice,” Federer said. “I really enjoy playing against him. It’s very evenly matched, you know. But I played him more often probably in semis than in finals most likely. I don’t know if that’s true, but that’s kind of how it felt like.” 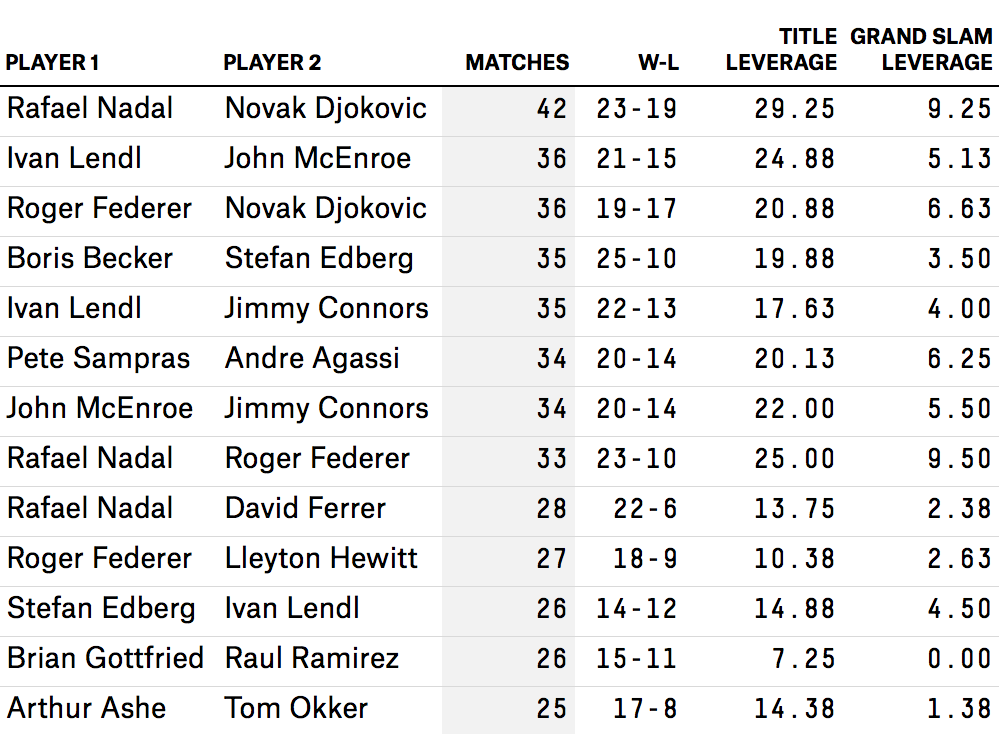 So far, Federer-Djokovic looks like a contender for top rivalry but it’s hardly the leader. Consider competitiveness, though, and today’s top two players are the very best at challenging each other: 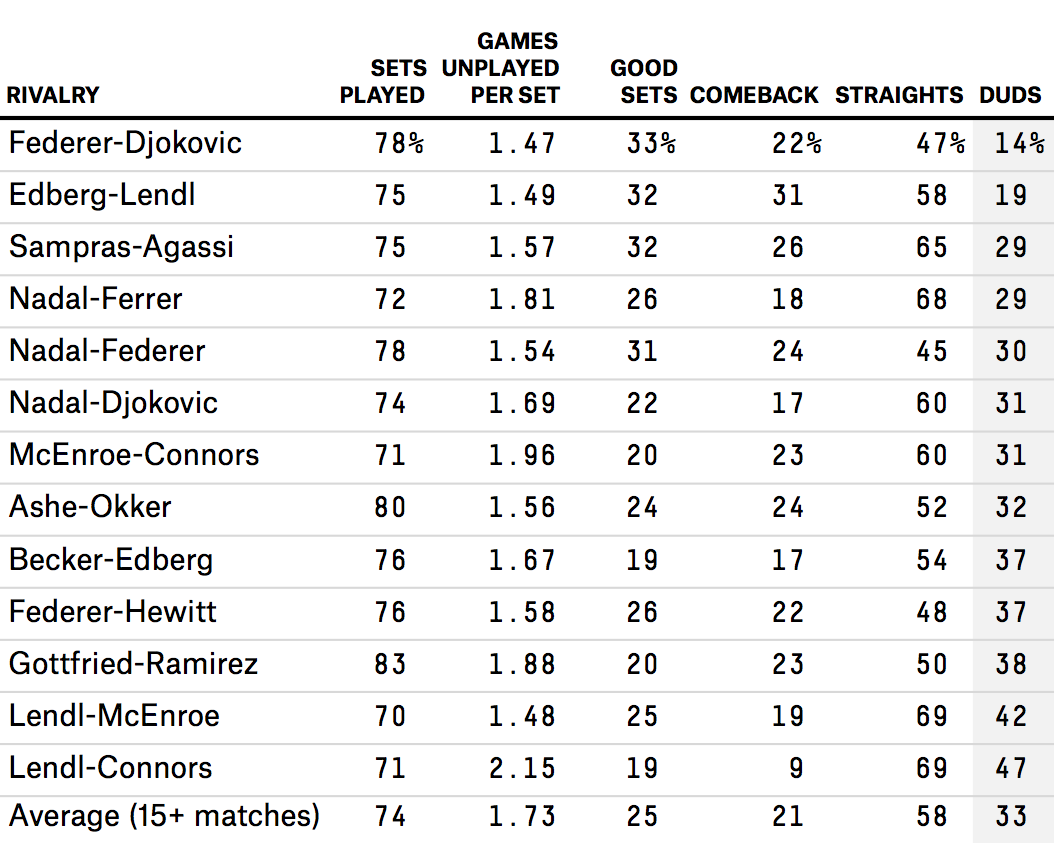 No amount of evidence will trump taste for most tennis fans. They might appreciate a matchup for the personalities, for the aesthetic joy of watching one player’s backhand volley against another’s forehand passing shot. Or they might adopt a favorite in their hearts, not in their minds, after a single memorable match. As much as I enjoy Federer-Djokovic, and especially was gripped while attending their Wimbledon final this year, I had more fun watching two players ranked outside the Top 100 playing a late-night five-setter in the third round of the 2009 U.S. Open.

The players themselves use their own criteria for ranking rivalries.

I wanted to lay out my entire statistical case to Federer and Djokovic this week, but their post-match press conferences weren’t the right setting. So I asked them, simply, where their rivalry ranked in their careers. Federer ranked his rivalry with Nadal over his tussles with Djokovic. He also put in a good word for rivalries with players closer to his age or older: Tim Henman, David Nalbandian, Lleyton Hewitt, Andy Roddick and Andre Agassi.11

“Both of these rivalries that I have with Roger and Rafa are special in their own way,” Djokovic said Wednesday. “I do feel those rivalries have contributed to my success a lot.” And he, like Federer, put in a good word for Nadal-Federer. “Their rivalry was amazing, and still is.”

CORRECTION (Nov. 14, 5:25 p.m.): Chris Evert and Martina Navratilova played each other 80 times, including in 60 finals, according to the Women’s Tennis Association. An earlier version of a footnote to this article said that they played each other 56 times, including in 47 finals. (There is some disagreement about their record; Tennis Abstract lists 56 Evert-Navratilova matches and 47 finals while the International Tennis Federation lists 59 non-walkover matches and 50 finals.)