Roger Federer has charged to the Wimbledon semifinals thanks in part to a tactic he has rediscovered: charging the net.

When Federer first won Wimbledon in 2003, the conventional tennis tactic on the grass courts was to serve and volley — come to net immediately after serving to cut off the return and take charge of the point. And Federer followed suit. He served and volleyed on 48 percent of his service points that year, according to data provided by IBM, the official stats provider for the Grand Slam tournaments. That means he likely served and volleyed on well over half of his first serves, since players use the tactic more often behind their initial, stronger offering.

But then opponents started returning more fiercely, and retrieving more volleys off the lawns, aided by improved rackets and intense physical conditioning. Federer adjusted to the game’s changes by dialing back his former tactic. He served and volleyed less than half as often while defending his title in 2004, and his rate of doing so on service points kept falling through 2006. It remained below 10 percent through his latest Wimbledon title run, in 2012.

This year, though, Federer is being coached by Stefan Edberg, the Swede who won six Grand Slam titles behind the strength of his net game, among the best of all time. The tennis media predicted the Fedberg partnership, as it’s sometimes called, would produce some vintage Federer play. And so far at Wimbledon, Fedberg has delivered.

Federer, at age 32, is back on the attack, though not as relentlessly as he was at 21. He has served and volleyed on 23 percent of his service points. That’s less than half his rate back in 2003. But it’s nearly seven times his rate at its nadir in 2011, and double his rate from last year, when he was coached by another ex-net-rusher, Paul Annacone. 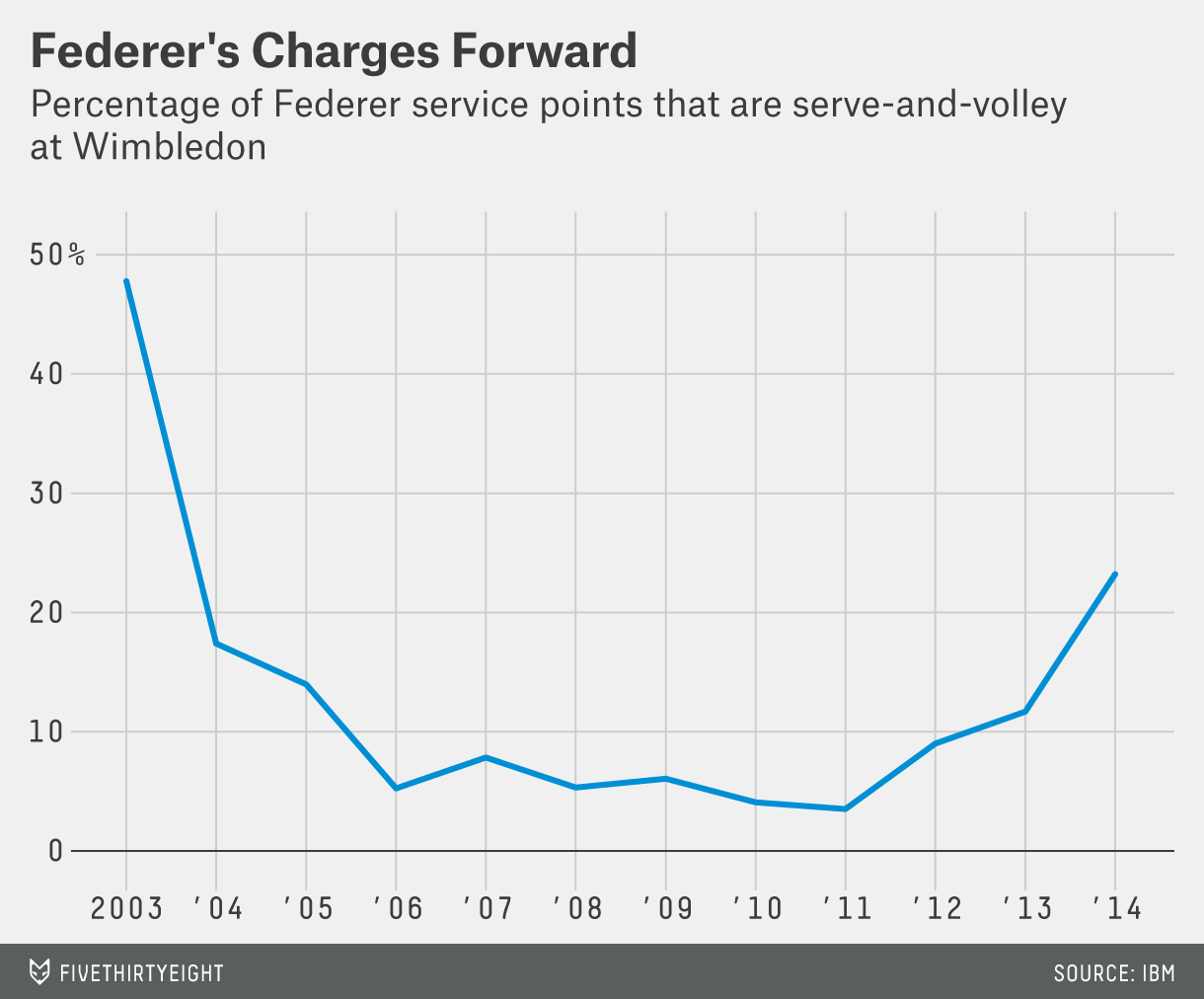 Retired players from the serve and volley’s golden age applaud the change. “We see Roger now going back to what he used to do when he was younger,” three-time Wimbledon singles champ John Newcombe said in a press conference this week. He said, of net play, “You add that to the game, you have a beautiful match.”

Serve-and-volleying, as beautiful as it may be, can’t be the only reason Federer has succeeded at this tournament: He’s using the tactic on fewer than one quarter of his serves. And serve-and-volleying, by definition, can’t help him in the other, equally important part of the sport, the return.

Here’s one sign, though, the tactic has helped: Federer is managing to succeed more often at it, despite doing it more often. There’s usually a usage-efficiency tradeoff in sports. Use a tactic more, and you’re no longer using it only when there are low-hanging fruits to be plucked. Take more three-pointers in basketball, and you’ll generally make a lower percentage because the ones you’re adding are the less open shots, or the ones farther from the basket. Throw more passes in a football game, and you’ll generally do worse on the average pass. Add in the element of game theory — the opponent notices you’re using the tactic more often, and adjusts accordingly — and those marginal cases can become downright disadvantageous.

Federer, though, has managed to win more frequently while serve and volleying, at the same time that he’s doing it more often. He’s winning 79 percent of his serve-and-volley points, well above both his 70 percent average at Wimbledon since 2003, and his 68 percent figure in 2003. Only once at Wimbledon did he top that success rate: in 2011, when he employed the tactic just 17 times. 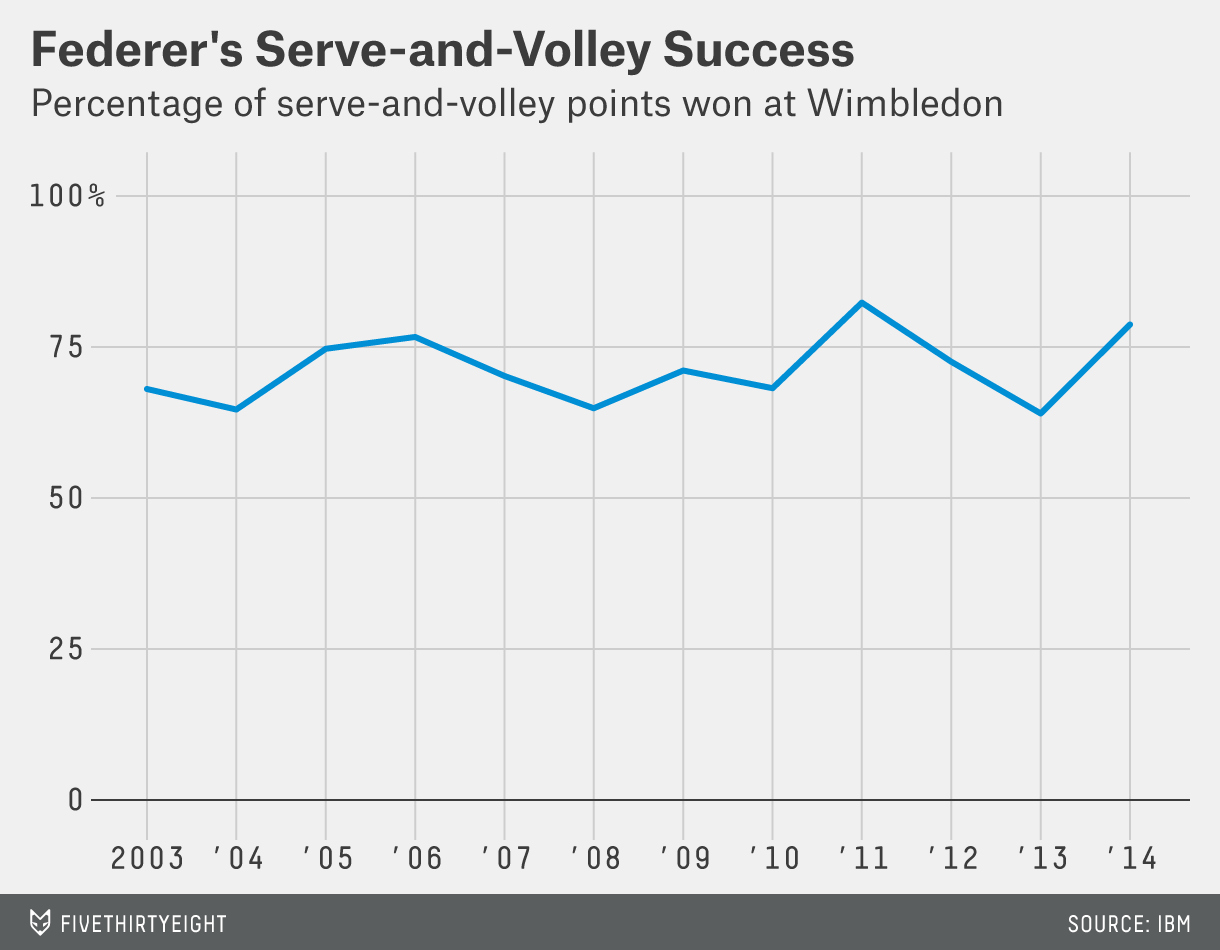 Comparing this year’s stats to earlier years’ can mislead, since this tournament isn’t over yet. There’s no reason to expect Federer’s frequency and success rate to decline in his Friday semifinal against Milos Raonic, since Raonic has one of the weakest returns of tour regulars. But if Federer wins and Novak Djokovic prevails in the earlier semifinal Friday against Grigor Dimitrov, the ultimate test of Federer’s resolve and ability to serve and volley will come in the final against Djokovic, perhaps the best returner the sport has ever seen.