Remember when Rick Perry, during his run for the 2012 Republican presidential nomination, said the Federal Reserve’s stimulus policies might be “treasonous”?

That was a dramatic escalation of tough talk on the Fed and a sign that the nation’s central bank had become a policy hobbyhorse for Republican presidential aspirants. We can expect this kind of Fed-bashing to continue as the 2016 primary fight heats up.

Serious contenders for the 2016 Republican presidential nomination, such as Sen. Rand Paul of Kentucky, are demanding an audit of the Federal Reserve. If passed, the so-called Audit the Fed bill — sponsored by Paul and Sen. Ted Cruz of Texas, who might also run for president — would subject the Fed’s monetary policy decisions to a full audit by the Government Accountability Office. (The GAO already exhaustively audits the Fed’s other activities.) Federal Reserve Board Chair Janet Yellen, in her semiannual update before Congress on Tuesday, fielded tough questions about the newest Audit the Fed bill while testifying before the Senate Banking, Housing and Urban Affairs Committee.

Potential presidential candidates like Paul care about the Fed because they believe future Republican primary voters do. Supporting the Audit the Fed movement signals a candidate’s conservative credentials and is useful as the Fed becomes — like so many other issues — a stand-in for a larger political struggle.

Opinions on the Federal Reserve have never been more split along party lines, survey data shows, and the central bank’s popularity has only slowly started to recover after dropping sharply during the financial crisis and recession years of 2007 through 2009.

The gulf between Democrats and Republicans began to widen during the presidency of George W. Bush. Although Greenspan was largely seen in a positive light by both parties, Republicans became a lot more approving of him. The average 4 percentage point differential during the Clinton years ballooned to an average of 17 percentage points by the end of Greenspan’s term in January 2006. 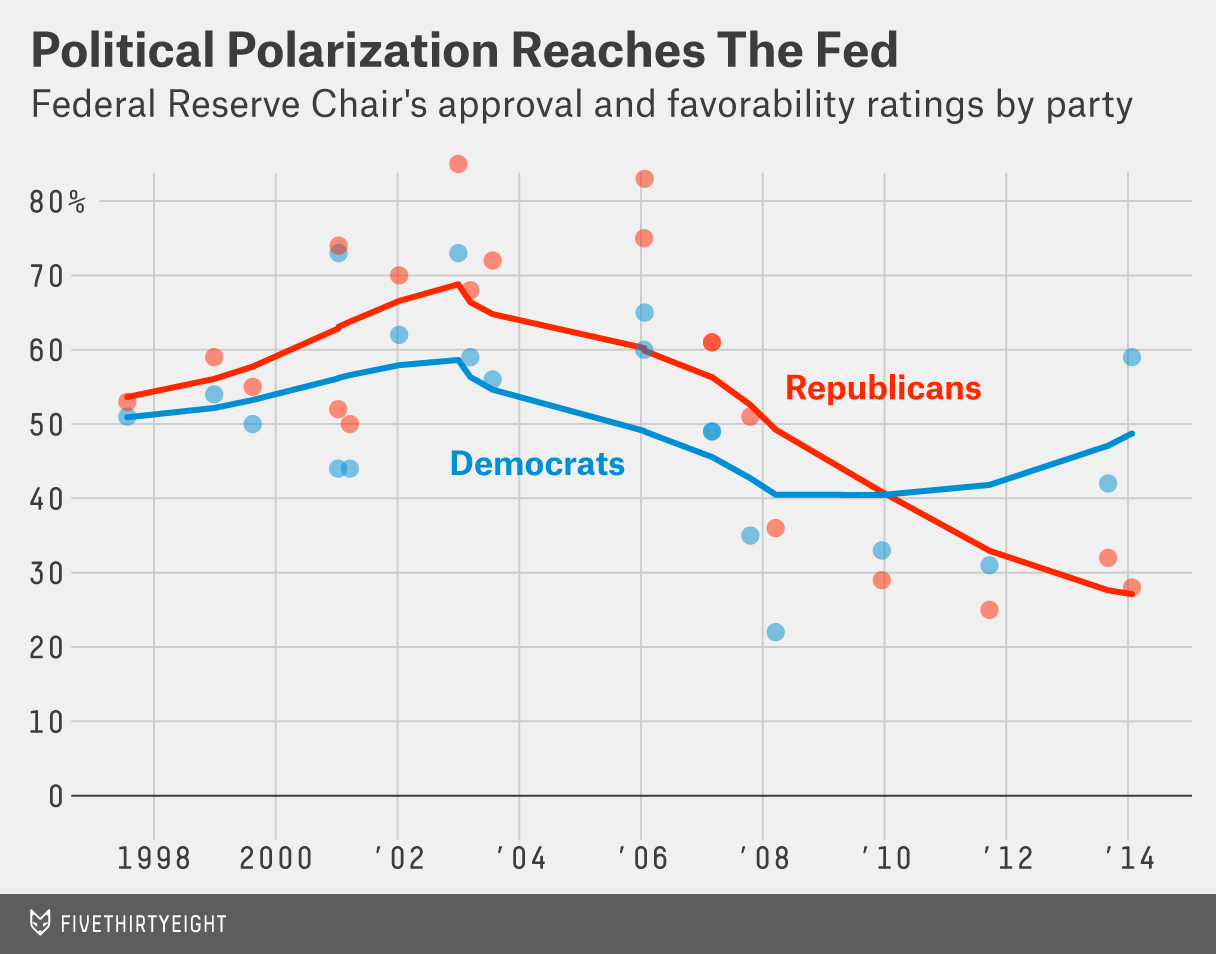 By 2008, after the U.S. economy deteriorated sharply, the Fed began to engage in unconventional — and historically enormous — policies. Favorable opinion of the Fed fell dramatically. Democratic approval of Chairman Ben Bernanke fell from 49 percent in March 2007 to just 22 percent in March 2008, while Republican approval dropped from 61 percent to only 36 percent in the same period.

Fascinatingly, after the election of President Obama, Democrats began to see Bernanke in a more favorable light while Republican opinion of the Fed chair soured. That is, opinion of the Fed flipped when the party in control of the White House did. Democratic approval of Bernanke rose through the end of his term in 2014, but Republican approval of him failed to do so. By early 2014, opinion of Bernanke by party had widened to 31 percentage points in a Gallup survey.

But don’t be surprised if Republican opinion of the Fed and its chairperson flips again if a Republican is elected to the White House.