Now that I’m allowed to write about basketball again after my stint as a consultant for the Atlanta Hawks, I wanted to follow up on this Grantland piece by Jordan Conn about the decline of basketball in New York City, the once-great hoops mecca. Conn had a few statistical notes on the downturn — for example, on a per-capita basis, New York ranked 27th among states in 2013 at producing Division I college basketball players — but I wanted to map the change in NBA talent generated by the city.

We can do that using the wins above replacement (WAR) metric developed by FiveThirtyEight’s editor in chief, Nate Silver, in his analysis of Carmelo Anthony’s New York Knicks contract. To measure the contributions of New Yorkers over the years, I plotted the change in the share of total, leaguewide WAR produced by players who were born in New York or went to high school there (according to Basketball-Reference.com’s high school data, which admittedly only lists the final high school a player attended).

Now, we could consider everyone from the New York metro area eligible. But here were Conn’s thoughts about what constituted New York:

It’s tricky to determine precisely who counts as a New Yorker, but for the purposes of this story, here are some rules: Long Island doesn’t count. Neither does Westchester, and definitely not Newark or any other part of New Jersey. New Yorkers come from the five boroughs — nowhere else.

Using those standards, here is the proportion of WAR generated by New Yorkers back to the NBA-ABA merger in 1977: 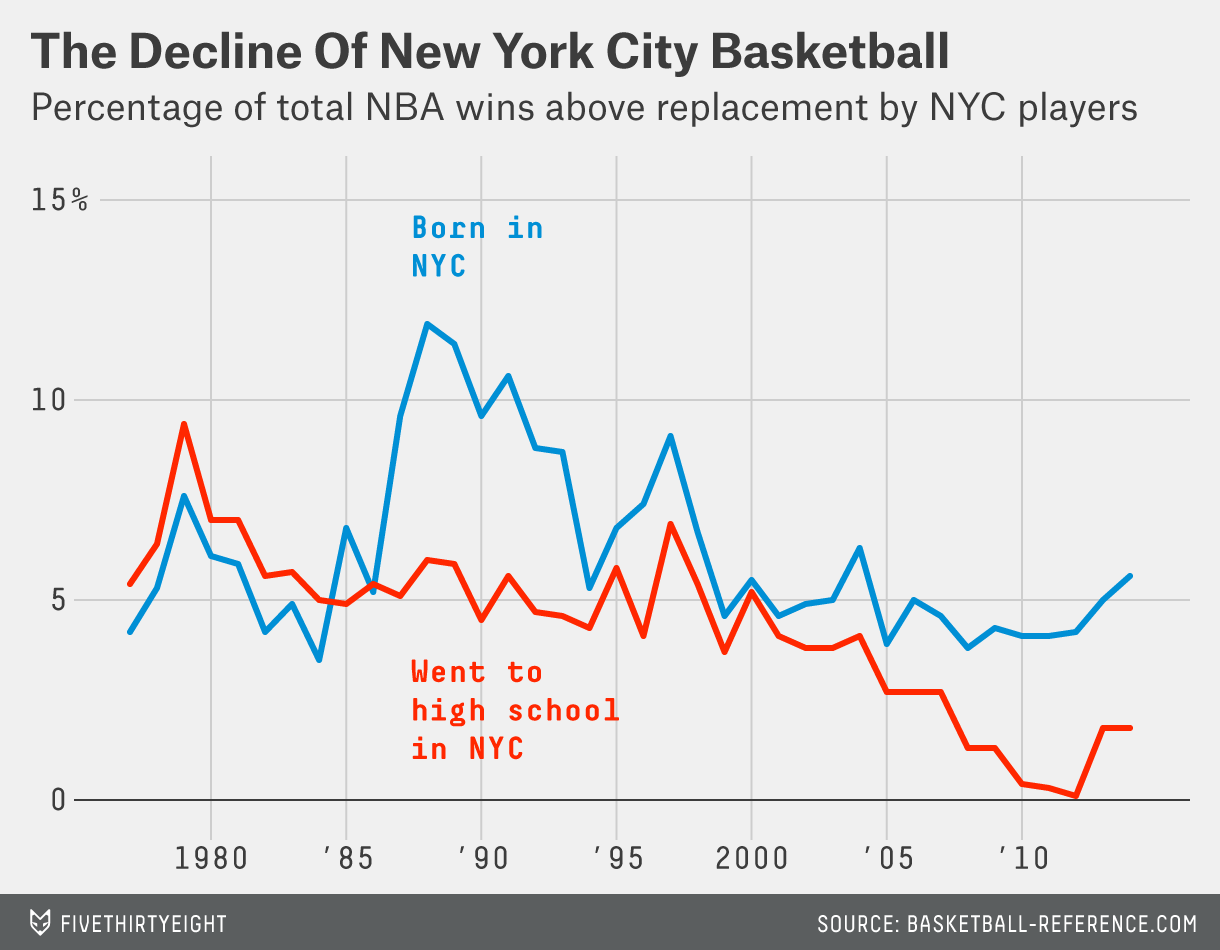 Looking at only NBA output, Conn is correct in his assessment of New York’s decreased basketball prominence.

Throughout the 1980s and 1990s, nearly 6 percent of total NBA WAR were created by New York high school products, a long-term average that grows beyond 7 percent — hitting as much as 12 percent in some individual seasons — if you consider Michael Jordan, born in Brooklyn but raised in North Carolina, to be a “New Yorker.” But by the 2000s, New York’s NBA production started to tick downward.

Some of that might be due to accounting; as Conn hints at, the rise of so-called basketball factory prep programs has regularly led players from smaller local high schools to transfer to huge national powerhouses designed to give them more scouting exposure, and a chance to improve grades or test scores. (Anthony, for example, is widely regarded as a Baltimore native but transferred to Virginia’s mighty Oak Hill Academy for his senior year, thus being listed in databases as a Virginia product.) But there’s also no doubting the impact on New York’s decline when hyped prospects like Omar Cook, Sebastian Telfair, Julius Hodge and Lenny Cooke failed to make a dent in the pros.

Now, only 1.8 percent of leaguewide WAR were created by players who went to high school in the city, courtesy mostly of former Indiana Pacer Lance Stephenson (now with the Charlotte Hornets) and the Hornets’ Kemba Walker. (In 2011 and 2012, before Stephenson and Walker matured into good players, Metta World Peace was basically the only player carrying the NYC schoolboy banner in the NBA.) Anthony, Joakim Noah and Roy Hibbert — and before them, Lamar Odom — help if we lump in players born in New York who graduated high school elsewhere, but the trend is clear: New York isn’t cranking out NBA talent the way it used to.