Six black churches have burned since the June 17 shooting at Charleston’s Emanuel AME Church in South Carolina, but these fires aren’t necessarily hate crimes or arson. The latest fire broke out Tuesday night at Mount Zion African Methodist Episcopal Church, a South Carolina church that was previously burned to the ground in an arson attack linked to the Ku Klux Klan in 1995. Federal officials said Wednesday that the latest Mount Zion fire was probably not caused by arson, according to a preliminary investigation, and said the source of the flames might have been lightning in the area.

There’s no question that arsons are disproportionately likely to occur at black churches, even though any individual church fire is unlikely to be arson. After a surge in church fires in the 1990s, the National Church Arson Task Force was created in 1996 to investigate connections between individual church attacks. (It disbanded in 2000.) According to the task force’s final annual report, 33 percent of all arsons and bombing attacks at houses of worship from January 1995 to August 2000 took place at African-American churches. Black churches accounted for an even larger share of arson attacks in the South (44 percent).

As a result, in the wake of an attack like the one in Charleston, where a white man is suspected of shooting and killing nine black people, it makes sense for fires and other incidents at black churches to draw increased scrutiny. Nonetheless, statistics on church fires kept by the National Fire Protection Association suggest that some of the recent fires will probably turn out to be simple bad luck, not arson.

From 2007 to 2011, arson accounted for 16 percent of all fires at churches and funeral homes (about 285 arsons per year). The most common cause of religious and funeral home fires was cooking equipment (30 percent). Arson and heating equipment were tied as the next most likely causes. Although they were not the most likely cause of fires, intentional fires were the most devastating, accounting for 25 percent of all property damage to religious and funeral properties from 2007 to 2011.

By Aug. 15, 2000, the report noted, 46 people were convicted of crimes related to bias-motivated arsons or bombings. Many of those were convicted on hate-crime charges. Of these, 19 incidents took place at African-American churches (6 percent of all attacks at black churches), and 27 took place at all other houses of worship (4 percent of the remaining attacks). The true proportion of arsons and bombings that were hate crimes is likely to be higher than the percentage that resulted in a hate-crime conviction, both because two-thirds of attacks did not result in an arrest and because attacks that occurred near the end of the period covered in the task force report could not have plausibly resulted in conviction before the report was finalized. 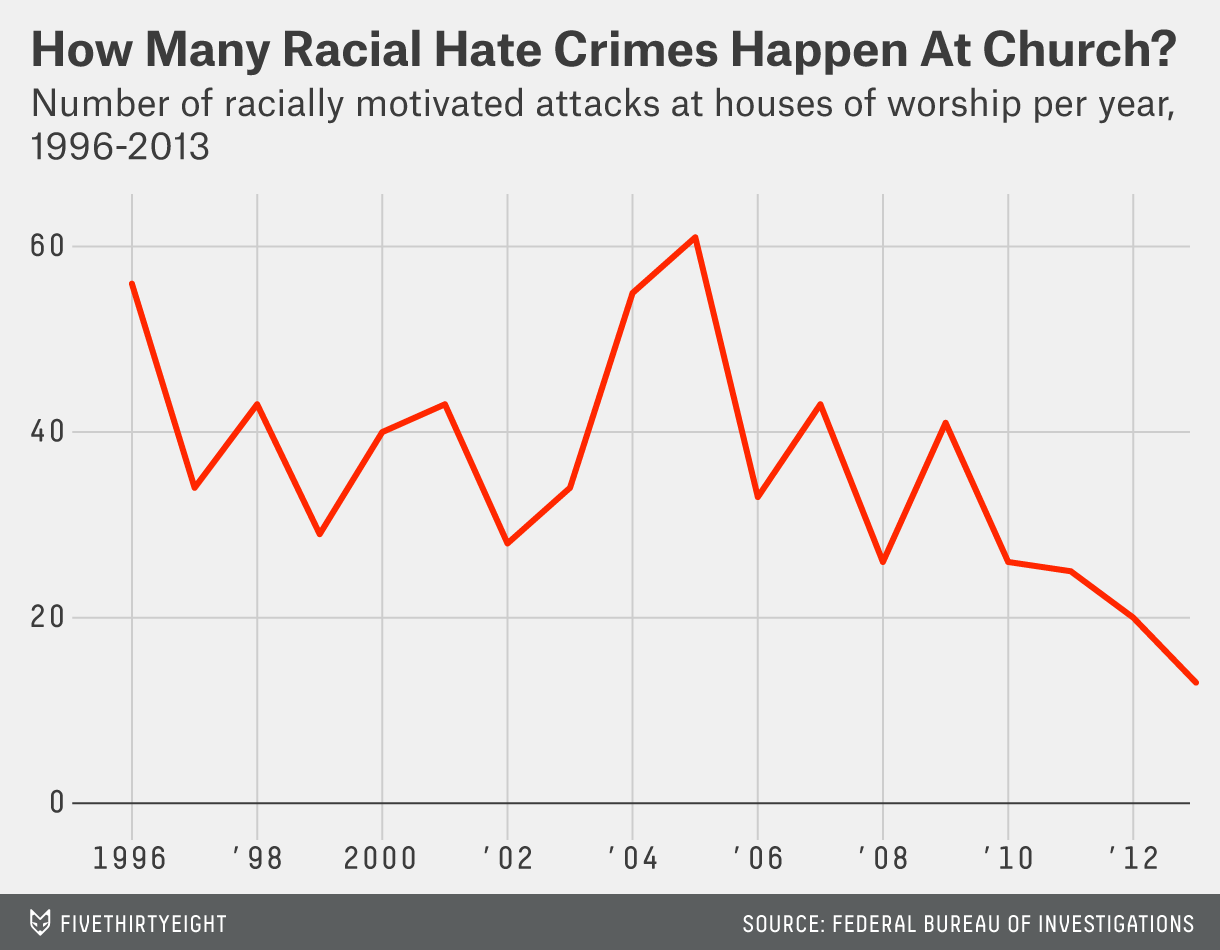 But pure statistics can’t convey the devastation that a racially motivated church fire can inflict on an institution that is so central to the lives of many black Americans, particularly in the South. Attacks on churches can have greater effects than those on individuals, because they represent an attack on a community and often destroy or damage the place where a community gathers to mourn after any other kind of attack. Additionally, African-American churches have often been hubs of political activism, so an attack strikes against the political power of congregations, not just the personal connections between worshippers.

So, while Americans wait for all the facts to emerge from the investigations into the recent fires, it’s important not to jump to conclusions about the source of any individual fire. And though church arsons may be uniquely devastating and attract television cameras, many more racially motivated hate crimes occur each week that do not get the attention these fires have received, even before they have been confirmed as crimes at all.

Update, July 3: On Thursday, the Justice Department issued a statement saying that of the six church fires in five states, two were determined to be of natural (or weather-related) causes, and one was the result of an electrical fire. The rest remain under investigation, the department said, and no links between them have been found.