One characteristic distinguishes the long-term unemployed from the rest of America’s jobless. It isn’t how many hours they worked at their old job, or what industry they came from, or even their level of education.

A FiveThirtyEight analysis shows that by far the single biggest predictor of whether someone will be out of work for a year or more is the state of the economy when he or she loses his or her job.1 Over the past 15 years, a period spanning two recessions, a one-point increase in the unemployment rate increased an individual’s odds of remaining unemployed for at least a year by about 35 percent. No other characteristic — age, sex, race, marital status, education or occupation, among others — had even close to that big an effect.

Americans who had the misfortune of losing their jobs during the height of the most recent recession in 2009 were more than four times as likely to end up out of work for a year or longer than those who lost their jobs during the comparatively good economy of 2007. Extended unemployment benefits, which are often cited as a driver of the persistently high levels of long-term joblessness, don’t appear to be a major cause of the pattern.

More than 2.5 million Americans have been out of work for a year or more. That’s down from more than 4.5 million in 2010 but nonetheless represents a crisis of long-term unemployment that’s unprecedented in the U.S. since World War II. The plight of the long-term jobless has gotten renewed attention in recent weeks in part due to mounting evidence that they are being left out of the economic recovery.

What’s gotten less attention is how the long-term unemployed ended up in that grim situation to begin with. This is an important question for policymakers, both for helping today’s jobless and for trying to avoid a similar epidemic in the future. If we could identify the qualities that make people more likely to end up in long-term unemployment, we could, at least in theory, tailor policies toward them, perhaps by training them in skills that are in demand or by teaching them how to search for jobs more effectively.

Yet most of the evidence suggests there is little that distinguishes the long-term unemployed apart from bad luck. Certain characteristics do make people more likely to become unemployed in the first place: The unemployed tend to be younger and less educated than the overall workforce; they are significantly less likely to be married and are more likely to be racial or ethnic minorities; they are more likely to have worked part-time at their prior job and to come from high-turnover sectors such as hospitality, or, particularly since the housing bust, construction.

But while there are significant differences between the employed and the unemployed, there is very little difference between those who have been out of work for more than a year and those who have been jobless for shorter periods. The table below shows how the long- and short-term unemployed compare to each other and to the labor force as a whole. Apart from the long-term unemployed being a little older, the two groups look nearly identical.2 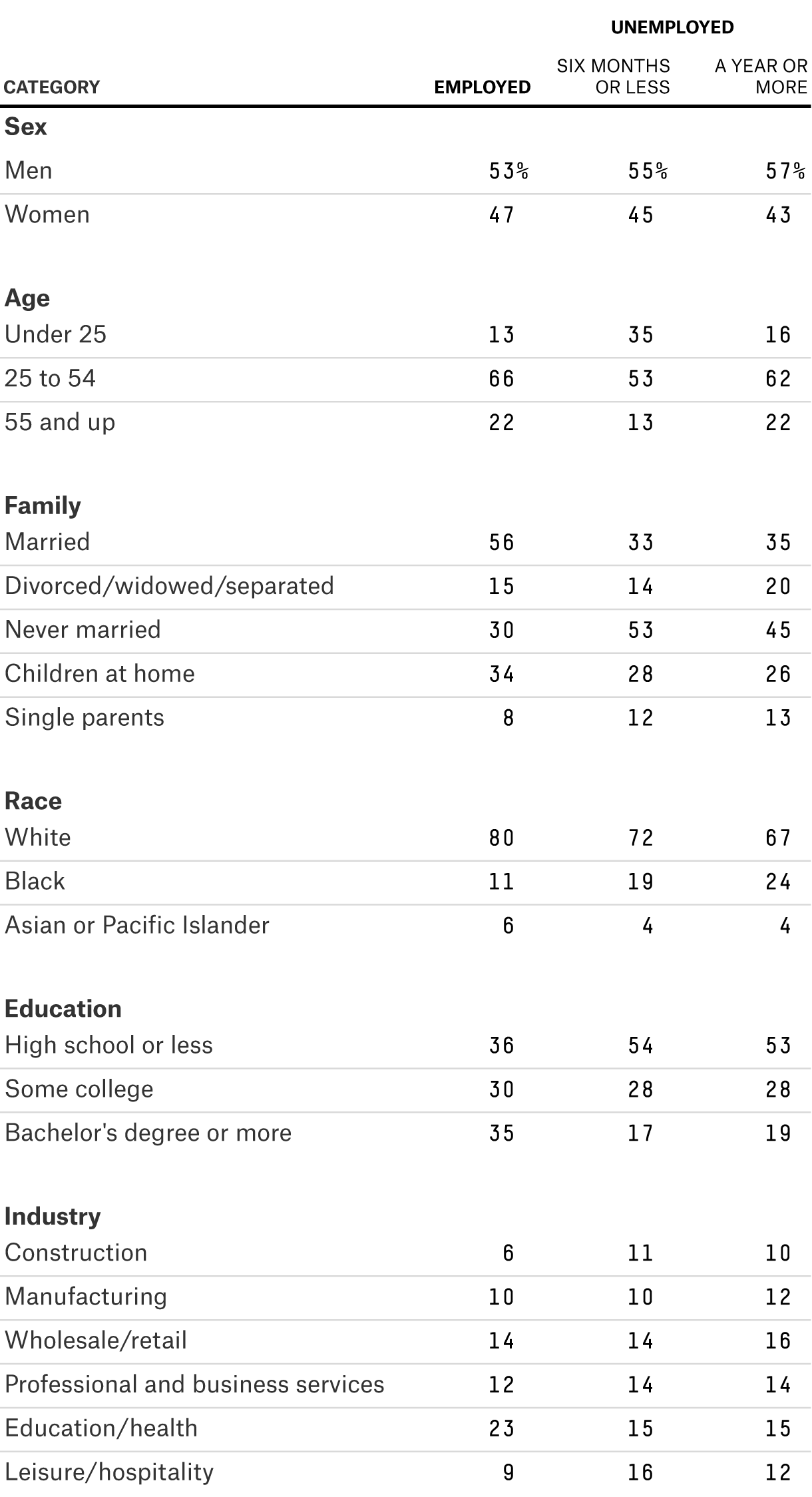 The similarity of the profiles suggests that once someone loses a job, it’s hard to predict whether that person will find another one quickly or whether he or she will get stuck in the trap of long-term joblessness. We can test this theory by calculating the probability that someone with certain characteristics will become long-term unemployed.

This calculation is possible because of the design of the Current Population Survey, the government’s main source of labor-force statistics such as the unemployment rate, which allows us to track individual households from month to month.3 We can identify who’s been laid off, for example, by looking at people who are employed one month and then unemployed the next.4 We can then look back in on those same people a year later to see whether they have a job.5

I looked at all the Current Population Survey records since 1998, a sample of about 34,000 individual unemployed workers.6 Over the entire period, a bit less than 4 percent of unemployed workers ended up out of work for a full year.

The table below shows the share of laid-off workers in various categories who ended up long-term unemployed, and also the share that ended up with jobs. As the earlier table suggested, most characteristics have remarkably little predictive value. With only a couple of exceptions, such as manufacturing, workers’ choice of industry or occupation has little effect on their odds of becoming long-term unemployed. People who worked more hours when they were employed aren’t meaningfully less likely to become long-term unemployed. Nor are those with less education — in fact, more educated workers were slightly more likely to be out of work a long time, though the correlation isn’t particularly strong.

That’s by far the strongest relationship of any characteristic I examined. Even characteristics that might seem likely to play a major role in predicting long-term unemployment, such as single parenthood, don’t have as big an effect.8 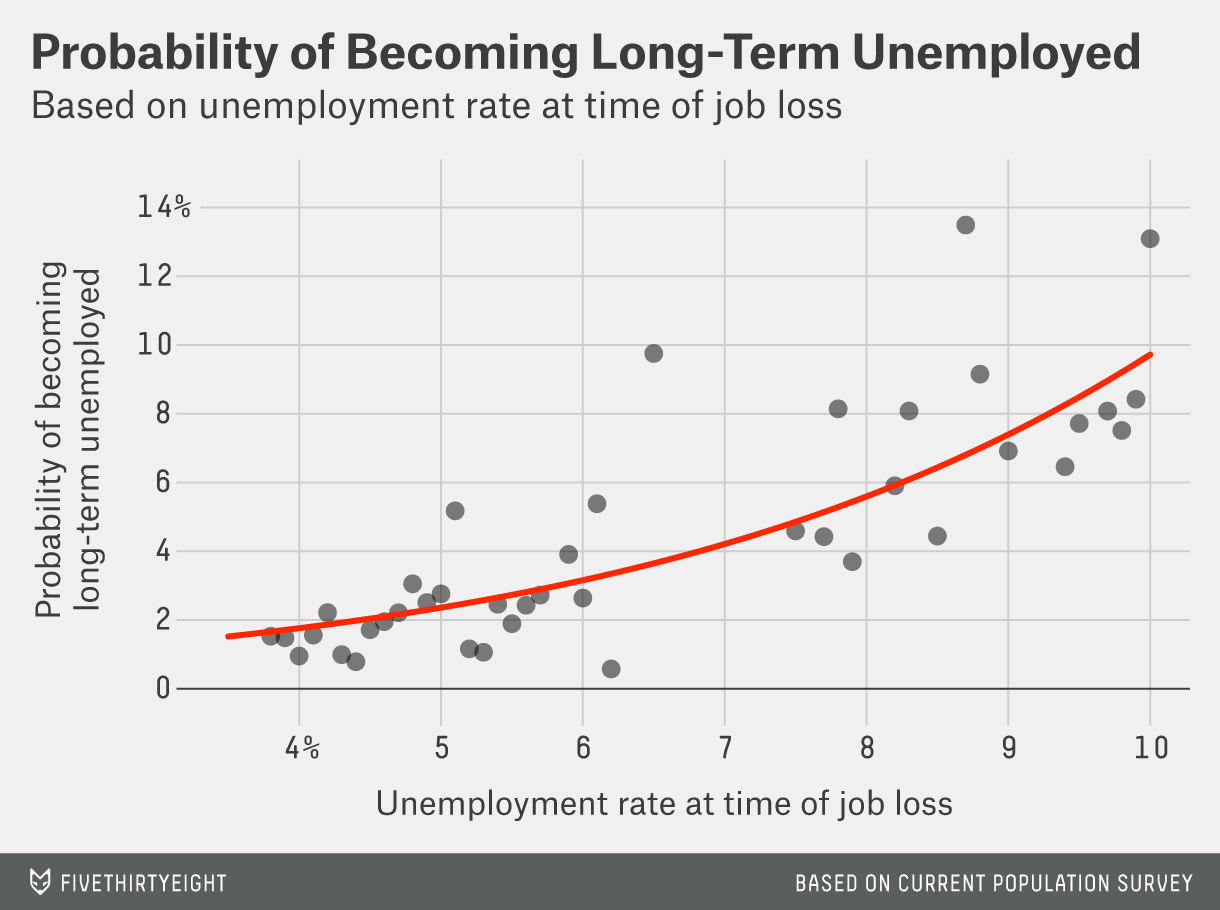 Of course it’s impossible to measure all the factors that could make it hard for people to get jobs. We don’t know from the Current Population Survey data whether the long-term unemployed were reliable employees back when they had jobs, or whether they would make good ones now. We don’t know how hard they’re looking for work, or whether they’re doing so effectively. Beyond broad educational categories, we can’t assess their skills.

Still, there’s no reason to think that the people who lost their jobs during the worst of the recession were somehow less desirable employees than those who lost jobs during better times. If anything, we’d expect the opposite. One of the hallmarks of recessions, particularly severe recessions, is that they hit even well-established employees who would be unlikely to lose their jobs during better economic times. Yet despite their comparatively strong employment histories, workers who lose their jobs amid a weak economy are far more likely to end up trapped in long-term unemployment.

Up to this point, I have assumed that the reason people who lose their jobs in a weak economy end up long-term unemployed is that they can’t find jobs. But there is another possible explanation: emergency unemployment benefits, which extended benefits to as long as 99 weeks in some states during the worst of the jobs crisis. Some economists have argued that by offering more generous benefits during the recession and recovery, the government has actually contributed to the unprecedented level of long-term unemployment in recent years. (The government offered extended benefits in past recessions, though never for as long as 99 weeks.)

According to that argument, unemployment benefits reduce the incentive for workers to accept new jobs, since they have an alternative source of financial support. Numerous studies have reached a wide range of conclusions about the impact of extended benefits on the jobless rate, but nearly all find that longer benefits do lead to both higher and longer-lasting unemployment.

It’s possible, then, that people who lose jobs in a bad economy are accepting the more generous benefits offered to them, and ending up in long-term unemployment as a result. But that doesn’t appear to be what’s going on.

Because the government routinely extends unemployment benefits during periods of high joblessness, it’s hard to tell which of these two factors is driving higher long-term unemployment. We can begin to untangle cause and effect, however, by splitting the unemployed population into two camps: those who likely received benefits and those who did not.

The Current Population Survey doesn’t track whether people are receiving benefits. But it does ask them why they’re unemployed — whether they lost a job, for example, or whether they quit. That’s a pretty good proxy for whether someone receives benefits, because in most cases people only qualify if they’ve lost their job.

If extended benefits aren’t to blame, that brings us back to luck. The long-term unemployed are mostly people who lost jobs at a time when companies weren’t hiring. Once they had been out of work for more than a few months, their chances of getting hired fell off dramatically: Multiple experiments have found that employers are reluctant to consider candidates who have been out of work for more than six months, even when those candidates are more qualified. Worse, recent research from former Obama administration economics adviser Alan Krueger and others suggests that most of the long-term unemployed are unlikely to find stable employment even if the economy improves.

Taken together, these are discouraging findings. A weak economy can cause long-term unemployment, but a stronger economy can’t fix it. That suggests policymakers’ top priority needs to be preventing the kind of long, slow recovery that leads to high levels of long-term unemployment in the first place. A stronger economic rebound in recent years would likely have put many of the recession’s victims back to work before they became long-term unemployed. That lesson won’t do much to help today’s jobless, but it might help prevent a similar crisis in the future.