Bullpens have eroded the workload of starting pitchers for years. By keeping a close watch on pitch counts and increasingly specializing their pitching staffs, teams have consistently reduced how long starting pitchers work into games. This regular season, bullpens accounted for the greatest share of workload in MLB history: 42.1 percent of innings pitched, up from last year’s record of 40.1 percent.

The leash has tightened even more in the playoffs, as October became bullpen season. Only three outings last postseason exceeded 100 pitches. But perhaps the game is on the cusp of a pushback against this trend: Through Oct. 13, there have already been 12 outings of at least 101 pitches in this year’s playoffs. The starting pitcher appears to be making a comeback, as Jay Jaffe of FanGraphs wrote.

While pitchers typically fare worse the deeper they pitch into regular season games, in some recent postseasons — 2014, 2016, 2017 and early this October — pitchers were actually better the third time through the lineup than the first, according to weighted on-base average data from Baseball Savant. (Last October, pitchers were better the second time through the order than the first.) Whether in the regular season or in October, could it be that starting pitchers are getting better deeper into the game?

This season, pitchers permitted to go deeper into games, by some measures, have never performed better.1 According to data from Baseball-Reference.com, starting pitchers have been more effective as the game goes during outings of at least 101 pitches — based on opposing on-base plus slugging. 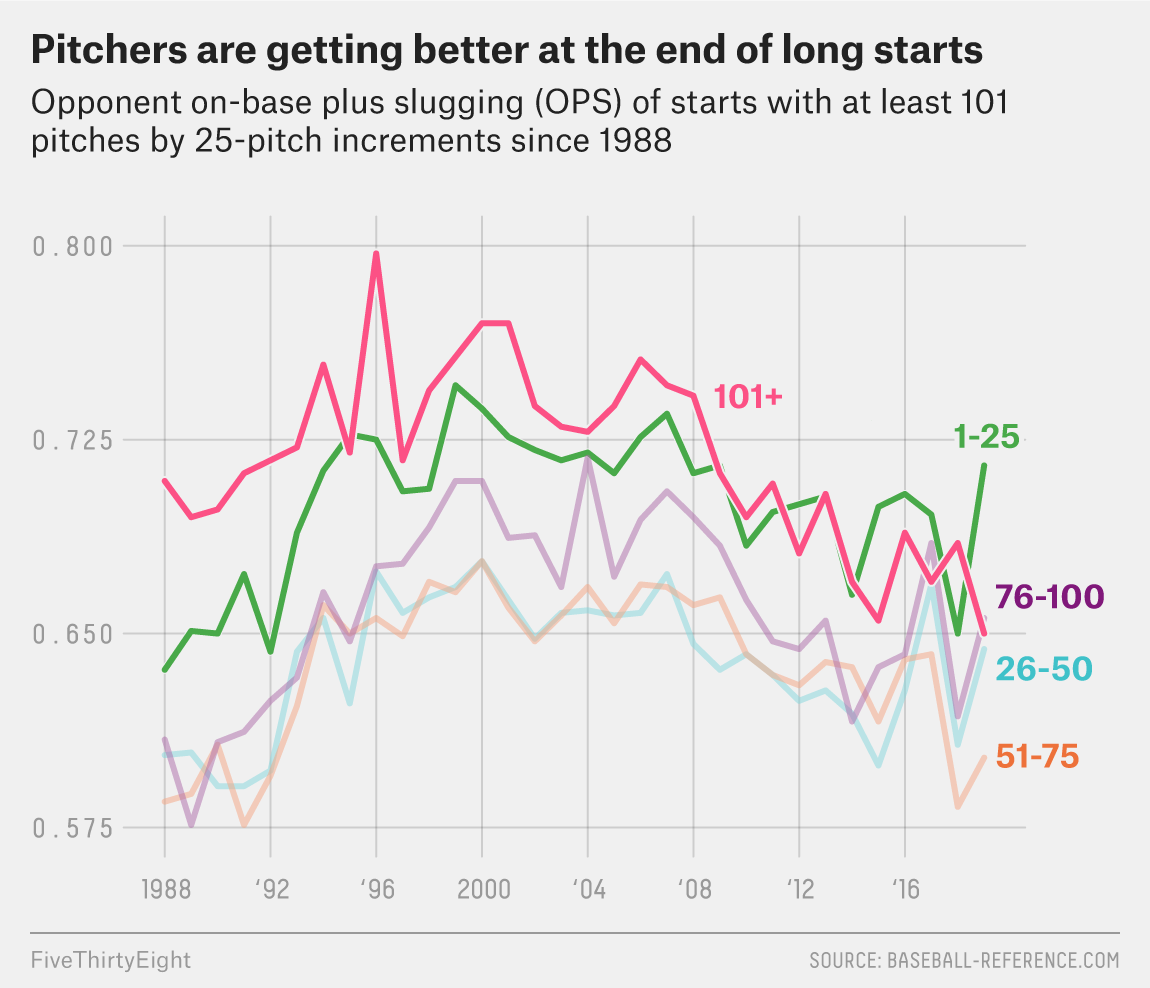 The number of pitchers allowed to go that deep into games has certainly shrunk over the years — there were only 1,028 starts in the regular season this year that went at least 101 pitches, compared with 1,082 in 2018, 1,390 in 2017 and 2,023 a decade earlier in 2009. So it may be that teams are only giving the chance to go deeper into games to the pitchers best equipped to pitch later into games — or at least the pitchers already having strong outings.

But those select pitchers and their performances raise another question: Can starting pitchers begin to take back some of the total share of pitches thrown? More teams are focusing on player development, and many of the pitchers at the center of those development efforts are having success throwing more pitches. Could this lead to a rebalancing of the pitching workload?

In the majors as a whole, pitchers have added velocity and are throwing breaking pitches with more movement. Within games this season, pitchers with a minimum of 1,500 pitches thrown averaged 93.1 mph in the first inning with their four-seam fastball but 93.8 mph in the seventh inning. And while relievers have long performed better than starting pitchers on a per-inning basis, starting pitchers shrunk the performance gap this season.

“I think where we are headed next is, ‘How do you figure out how to lengthen use of your starter?’” said Derek Falvey, chief of baseball operations for the Minnesota Twins. “The more teams think about development at the major league level, I think the more you’ll see these conversations popping up like, ‘How do you get pitchers to go deeper into games?’”

While Astros manager A.J. Hinch said this spring that he planned to be more like the Tampa Bay Rays in limiting starting pitchers’ workloads, there was no dramatic change, as Astros starters threw the fourth-most pitches in baseball. Astros co-aces Gerrit Cole and Justin Verlander have continued to dominate late into starts so far this postseason. They have now combined for three of the 12 postseason starts that have matched or exceeded 101 pitches this postseason, accounting for 22 1/3 innings in those outings while striking out 32 batters and allowing just 11 hits, three runs and five walks.

Caleb Cotham, an assistant pitching coach and director of pitching for the Cincinnati Reds, said that pitchers who are “intentional in how they train and diligent in putting in the work on the right things” can use technology to work toward dramatic improvement in their skills. Cotham, who joined the Reds before this season, trained at Driveline Baseball beginning in 2014 and will be working again with Driveline’s Kyle Boddy, who was hired this month to lead the Reds’ pitching development efforts. Cotham believes that pitching stamina is another attribute that can be trained.

“Baseball is getting better at measuring more things,” Cotham said. “Having more information to then apply to individual, such as, ‘This guy’s [elbow and shoulder] internal rotation goes down significantly after 85 pitches. This other guy has lower arm speed but he maintains it. He can sustain this.’ It will be very interesting moving forward.”

“The game will probably get pretty weird, pretty soon.”