Over the years, bullpens have eroded the workloads of starting pitchers. This season, relievers have accounted for the greatest share of pitching workload in Major League Baseball history: They have completed 41.1 percent of total innings through Wednesday, up from last year’s record of 40 percent. There are a variety of reasons for this trend, including teams becoming more aware of how starting pitchers tend to do worse each time through the opposing lineup and the increasing specialization of the sport.

For more than 40 years, relievers had outperformed starters on a per-inning basis. But this season, through Wednesday, starters’ ERA is 0.02 points lower than that of relievers. Starters have not posted an ERA superior to that of relievers since 1973, but that gap has shrunk rapidly, and this year it could be potentially erased. As recently as 2012, the overall ERA of relievers was half a run better than that of starting pitchers. 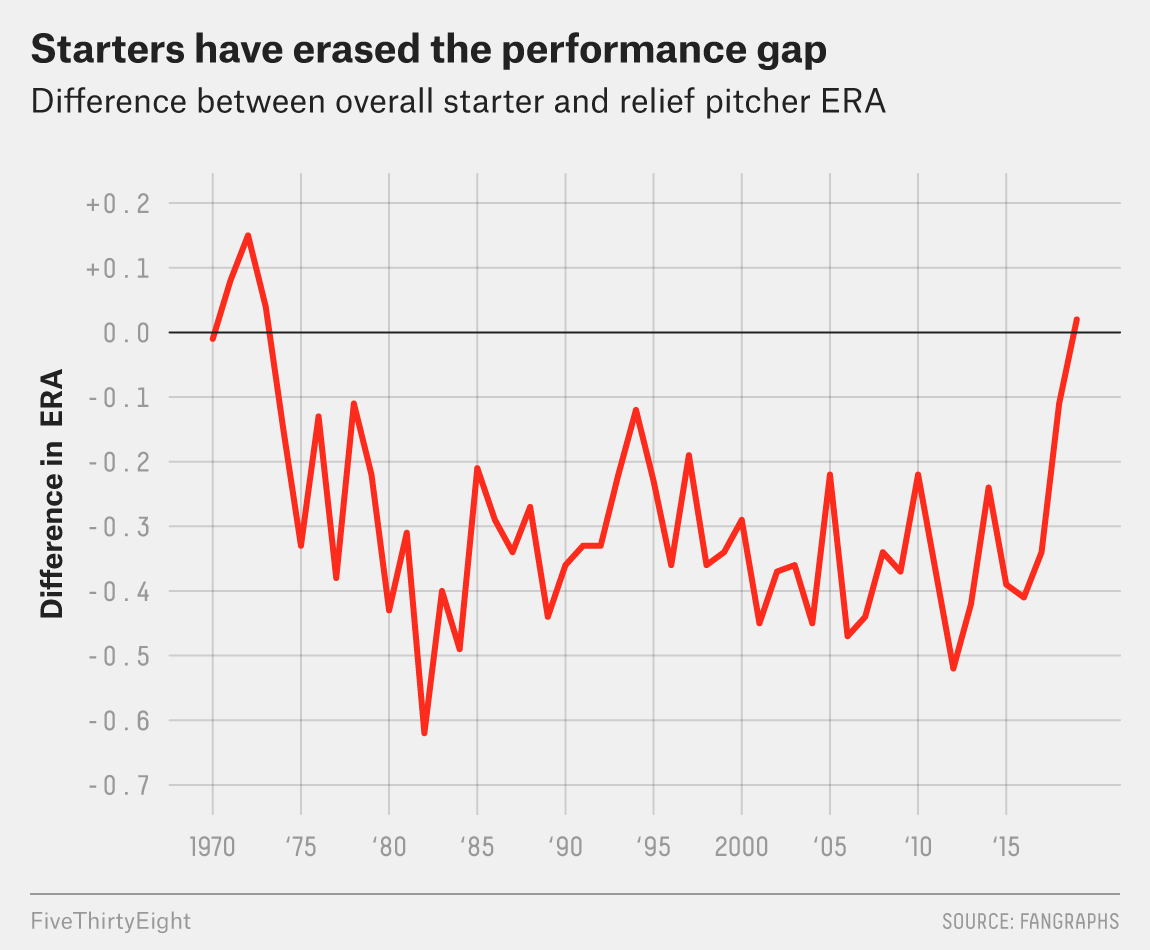 Perhaps this suggests that the sport has reached the limits of bullpenning and specialization — there are too many relievers employed. Through Tuesday, 492 different pitchers who primarily serve in relief have appeared in games this season.1 That already breaks the record set last season (488) and is up from 381 relievers in 2010 and 297 in 1998, the first season that MLB had 30 teams.

This change in personnel may explain relievers’ decline in performance the first time through opposing lineups, relative to starting pitchers, a trend that Ben Clemens at FanGraphs documented in May and has continued into the summer. For the first time this century, starters have been better than relievers in their first time through the order in back-to-back seasons. Craig Edwards, also of FanGraphs, found there have been more low-leverage innings this year and poorer performance within them,2 speaking to less meaningful baseball and more poor teams. Those innings have presumably been pitched by lesser relievers, diluting the group’s overall performance. There have been fewer meaningful innings this season — and also a greater volume of lesser-skilled relievers.

A key decision for managers in today’s game is deciding whether to stick with a starter a third time through the lineup or to use the bullpen. And the gap between starters in that position and relievers has shrunk to its lowest level since 2005, as relievers have an advantage of only 49 points of opponent OPS this season compared with a 64-point edge last season and a century-high, 88-point difference in 2007, according to Baseball-Reference.com. 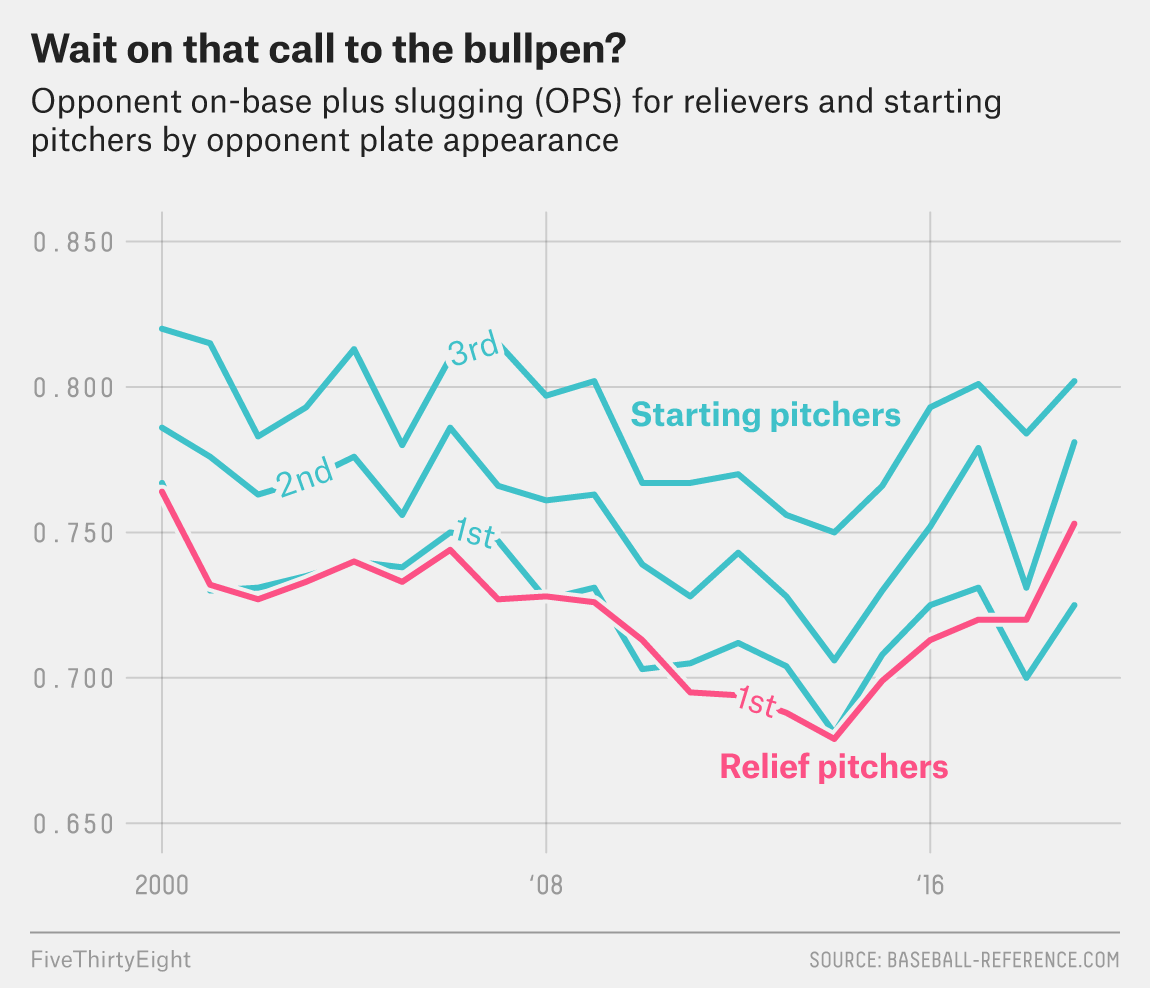 Another reason for the convergence between starters and relievers is that starting pitchers are gaining relative skill. For the first time in the pitch-tracking era, which dates to 2007, the average fastball velocity of starting pitchers (93.3 mph) is less than 1 mph (0.8 mph) slower than that of relievers (94.1 mph). In 2012, relievers’ average fastballs were 1.7 mph faster than those of starters, and the difference has generally been shrinking since. Relievers’ overall fastball velocity has even declined this season, for the first time since 2008. Moreover, starters so far in 2019 have posted a higher difference between their strikeout rate and walk rate (14.5 percentage points) than relievers (13.9 percentage points). This is the first time starters have had a greater difference than relievers in the two rates since 1986.

New technology is also allowing pitchers to improve the efficiency of their pitches. Starting pitchers also generally have a greater variety of pitches — and better command — than relievers, which is arguably one reason why they are starting pitchers and not relievers. If starters close the velocity gap, where relievers have traditionally held an advantage, they are closing a significant portion of the performance divide.

Perhaps the game has swung too far in favor of relievers. Managers might want to wait a little longer on that call to the bullpen, or at least consider whom they are calling upon.