On opening day, every team has playoff dreams. Early on, the potential of the season outweighs our knowledge of each team’s quality. While our best predictions are modestly useful, they can’t tell us which team is destined for greatness with much certainty or which early-season trends to trust or disregard. That makes it tough for a baseball columnist — a pitiable lot, us — to write about anything with any certainty.

But we do have spring training. Conventional wisdom holds that what happens in March is meaningless. But conventional wisdom can’t use R. Spring training results aren’t entirely worthless — either for players, as FiveThirtyEight’s own Neil Paine showed last year, or for teams. And I’m particularly interested in this idea that a team’s spring training may offer some indicators of how its season will go. What are the limits of its powers? And what is its potential?

We know that spring training isn’t incredibly predictive. I gathered data on each team’s spring-training and regular-season performances in the last five years (2010-2014), checking to see whether there was any correlation between a team’s offensive performance in spring1 and its average regular-season on-base plus slugging percentage (OPS). Just as with other spring statistics, there was a weak but consistent2 relationship between the two. The teams that bash in spring tend to continue doing so through the summer.

If we look at spring training performances and then compare them against what sabermetric projections3 have to tell us, these preseason games become a lot more telling. So rather than just see whether offensive stats from spring training correlate to regular-season stats, let’s tally up all of a team’s player projections (I used PECOTA projections from Baseball Prospectus), average them, and combine that with spring training stats.

Once I added in the projections, I had a workable system for estimating a team’s regular-season OPS — much better than the one based solely on spring training data.4 This isn’t so far-fetched — we make these kind of calculations in our heads all the time. If a team is terrible on paper but slugs like the pre-humidor Colorado Rockies in spring training, we assume it’s likely to end up somewhere between those extremes in the regular season.

After factoring in the projected performance, a 100-point increase in spring training OPS raises a team’s expected regular-season OPS by 15 points. While that’s not a huge increase, it’s also a much stronger relationship than what we find for individual players, where a hitter whose OPS is 100 points better than expected in the spring improves their expected regular-season OPS by only six points.5

There’s a reason spring training has more to tell us about teams than individual players. It’s about signal versus noise. For an individual player, any set of 50 plate appearances (in spring training or otherwise) is extremely volatile and doesn’t say much about them individually. But bring together all the plate appearances of the nine players who make up a batting order and the volatility begins to cancel itself out. All of a sudden we have some sense of how good the nine are in aggregate.

For example, New York Mets center fielder Juan Lagares hit much better than expected for the past month, and there was probably some luck involved in his .359 spring training batting average. But Mets catcher Travis d’Arnaud hit much worse (.212/.226/.288) than PECOTA would have predicted. If we gather together Lagares’s lucky singles and d’Arnaud’s unfortunate strikeouts, we get a decent measure of the average ability of Lagares and d’Arnaud together — even if we aren’t sure how much of the difference between the average and their individual numbers will come from d’Arnaud improving or Lagares regressing.

Speaking of the Mets, they led all of baseball with an .817 average spring training OPS despite mediocre projections. Such a performance is good enough to raise their expected regular season OPS by 11 points, which ought to be worth something like two wins over the course of the season.6 That should bolster the fans’ dark-horse World Series hopes (or at least their hopes of making the playoffs for the first time in nine years). 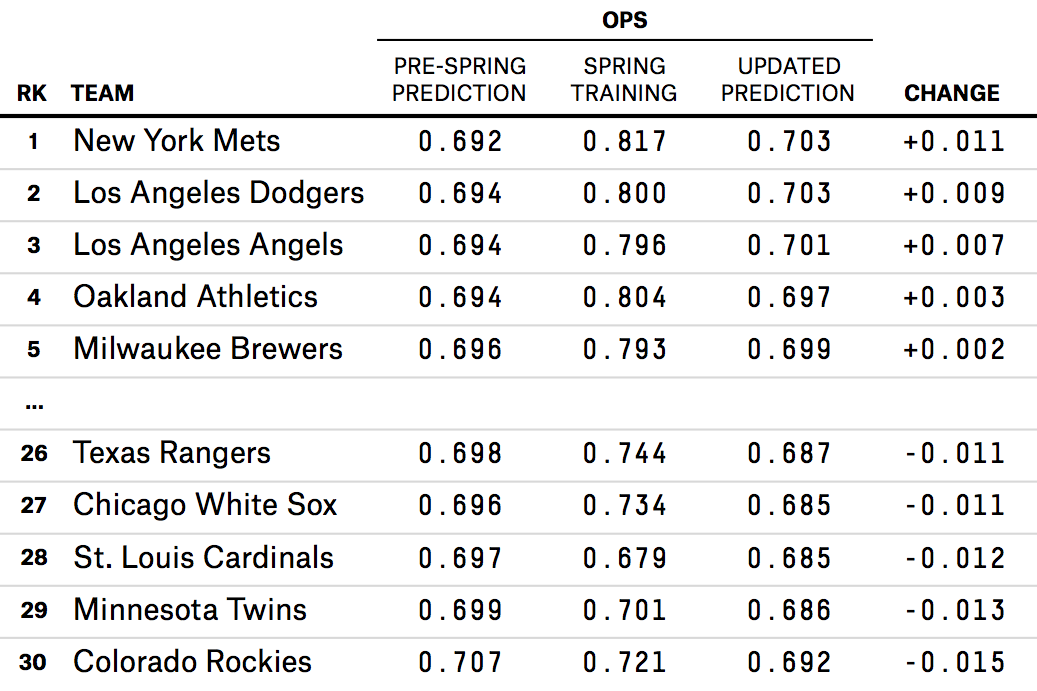 On the other side, teams like the Rockies,8 Minnesota Twins and Texas Rangers showed unexpectedly anemic offenses in spring training, which drags down their regular-season projections. None of these teams had more than a faint hope at the playoffs anyway, but the third- and fourth-biggest decreases in expected offense belong to two potential playoff contenders — the St. Louis Cardinals and the Chicago White Sox — which may now find their paths more difficult.

So you don’t have to wait months to begin worrying (or in the case of Mets fans, hoping) about the fate of your team. Once combined with a dose of projections, spring training results go a long way toward predicting how well a team will hit.

CORRECTION (April 10, 2:56 p.m.): An earlier version of this article included a table with incorrect information on teams’ spring training OPS averages. It has since been updated.