Going into the 2013 baseball season, you would have been forgiven for thinking Marlon Byrd’s days as a relevant player were behind him. He was 35 years old, an age at which most players’ skills have deteriorated significantly. He was coming off a miserable year, one in which he hit .210/.243/.245, was discarded by two teams (the Cubs and the Red Sox, who combined to go 130-194 on the season) and received a 50-game suspension after testing positive for the banned substance tamoxifen.1 Although he signed a minor-league deal with the Mets in February, few thought Byrd would even be serviceable in the upcoming season.

Then Byrd went on a tear in spring training. He hit .357/.393/.571 in exhibition games, was subsequently named the New York Mets’ opening-day right fielder and went on to put up the best year of his career — in New York for five months of the season and later, after a trade, as a member of the Pittsburgh Pirates’ first playoff team since 1992.

With the benefit of hindsight, it’s easy to connect the dots and declare that Byrd’s hot spring set the tone for his renaissance season. But is that what happened? Does an unusually strong March have any predictive power over a player’s performance once the games count?

The answer is … well, sort of. To find out what that means for this year’s crop of spring standouts, I looked into all the data since 2006, the earliest season for which MLB.com lists spring-training statistics. Using wOBA, an advanced metric to measure a batter’s offensive performance,2 I ran a weighted correlation3 between performance in the spring and during the regular season. It revealed a weak relationship between the two variables, at best.4

You can see that weak relationship below. Each dot on the graph represents a player’s season plotted according to his spring training wOBA and his corresponding regular season wOBA. 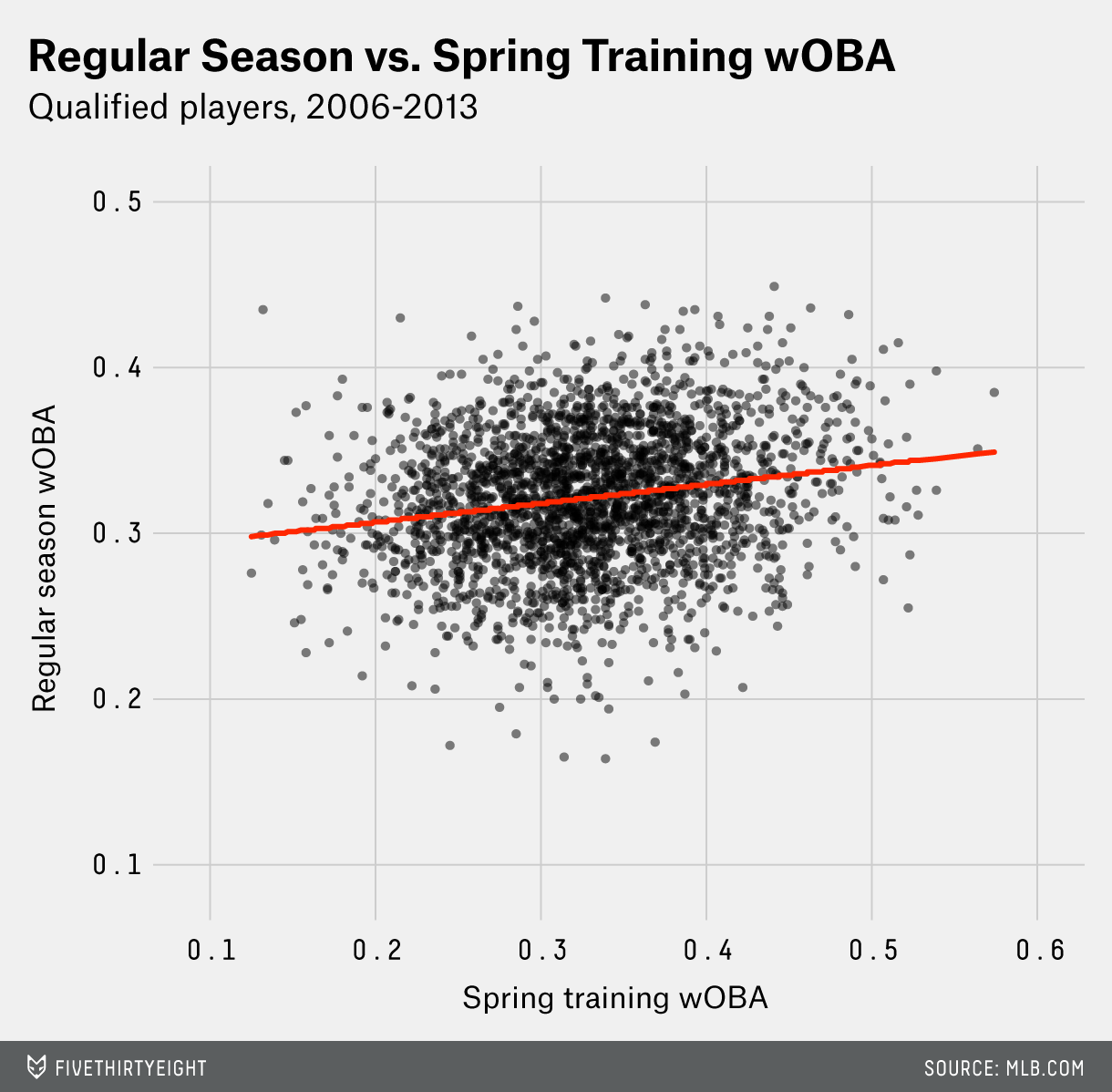 We also have access to information beyond a player’s spring-training statistics. In the case of a veteran player like Byrd, we know his track record from recent seasons and can use that data to inform expectations for the forthcoming season.

One of those systems was developed by sabermetrician Tom Tango, who releases a set of projections known as the Marcels (so named for the pet monkey from the show “Friends”) before each season. These projections are “so basic that a monkey could compute them,” but they perform no worse than far more sophisticated projection systems — a testament to the fundamental power of a weighted average of recent seasons and a simple aging adjustment. The sabermetricians (and brothers) Jeff and Darrell Zimmerman took the time to calculate historical Marcel projections for players going back to 1901, which we can use to build our regression.

We then find that spring productivity is statistically significant when predicting actual performance in the upcoming season, even after controlling for a player’s Marcel projection. However, while significant, the effect is extremely small: To raise his expected regular-season wOBA by just a single point, a typical player would need to hit for a wOBA roughly 17 points higher than expected during the spring.

In other words, spring numbers can and should affect our predictions for a player’s regular-season production, but only slightly, and only after a particularly strong or weak performance.

Among players likely to get playing time (a minimum of 400 plate appearances, according to Fangraphs’ depth charts), we should keep an eye on the likes of the Tigers’ prospect Nick Castellanos, the Cardinals’ Kolten Wong, the Royals’ Mike Moustakas and the Mariners’ Brad Miller, all of whom are tearing up opposing pitching during the spring thus far. And the Pirates’ Andrew McCutchen, last year’s National League MVP, could be even better than expected this year given his spring.

(Revised wOBA is what we would expect for the players’ 2014 wOBA after we factor in their spring performances.)

At the other end of the spectrum, the projected everyday players whose poor showings in spring training are most likely to cost them during the regular season are 2013 rookie sensation Yasiel Puig of the Dodgers, the Mariners’ Corey Hart, and the Cubs’ Ryan Sweeney and Junior Lake.

There’s no guarantee any single one of these guys will use the spring to propel himself to a great regular season — or, conversely, that a rough spring portends certain doom — but the data says these players are more likely to diverge from their projections now than they were just a month ago.