We went into Election Day with a hypothesis: Most Americans would cast a straight-ticket ballot — with some notable exceptions, which we’ll address in a moment. And we decided a good way to test this was to look at statewide races most likely to drive turnout in a midterm election cycle: U.S. Senate and governor contests.

There were 22 states that had races for both the Senate and governor on the ballot this election cycle. And what we found was the same party swept both offices in 16 of the 21 states where each race has been called1, with Democrats capturing both races in 12 states and Republicans doing so in four. Or, in other words, our hypothesis was mostly right — most Americans did vote for the same party in their Senate and governors race. But there were five states — Arizona, Maryland, Massachusetts, Ohio and Vermont — where voters chose a Republican governor and a Democratic senator.

And while we were interested in what happened in these five states (more in a moment), we also wanted to look at every state that had both a Senate and governor race on the ballot to see just how far apart the voting margins were. The idea was this will help us understand how uncommon — or common — split-ticket voting was in 2018. And we could then situate what happened in 2018 by looking at previous midterms to see if there was a trend in how much split-ticket voting occurred between these two offices. (Spoiler: Split-ticket voting hit a new low.)

To do this, I calculated the difference between the margin of victory in the Senate and gubernatorial races for each state using the Democratic and Republican vote shares in each contest.2 And as the table below shows, Massachusetts had the biggest difference between its vote share margin in its races for Senate and governor. Republican Gov. Charlie Baker won reelection by about 32 percentage points and Democratic Sen. Elizabeth Warren garnered a second term with a roughly 26-point margin, producing a gap of 57 points. So, in other words, in hyper-blue Massachusetts roughly 25 to 30 percent of voters cast ballots for both Baker and Warren.3 Two other states, Vermont and Maryland, also had very large differences between their Senate and governor races — about 55 and 47 points, respectively. Along with Massachusetts, these races all featured relatively popular incumbent Republican governors — Phil Scott in Vermont and Larry Hogan in Maryland — running in strongly Democratic states that easily reelected incumbent Democratic senators. The popularity and independent streaks of these GOP governors clearly helped them overcome the sharply Democratic leans of their states.

But these three states were notable outliers — no other state had a difference between their Senate and governor races that was greater than 17 points. That said, these less divided contests can still show you where a stronger candidate for one party may have made a difference. Take Tennessee’s Senate race, for instance. Republican Rep. Marsha Blackburn defeated Democrat Phil Bredesen there, but Bredesen — a popular former governor — made the Senate contest notably closer than the gubernatorial election.

Incumbency may have been a factor, too. Both the Tennessee Senate and gubernatorial races were open seats, but in another GOP-leaning state like Ohio, there was one incumbent on the ballot, which might help explain why Ohioans elected a Democratic senator and a Republican governor. Incumbent Democratic Sen. Sherrod Brown won his race by about 6 points and Republican Mike DeWine won the open-seat governor race by 4 points. Given that Ohio is 7 points to the right of the country, Brown probably benefited at least some from an incumbency advantage The two races ran relatively close together — the difference was 11 points — suggesting that most voters voted for the same party in both contests.

But we were also interested in what would happen if we took a step back and zoomed out, looking at other midterm cycles and split-ticket voting. How would 2018 compare? It turns out that 2018 is part of a trend that shows fewer Americans are splitting their tickets (at least in races for the Senate and governors in midterm elections). This election had the smallest median difference of any midterm cycle going back to at least 1990 — 10 points.4 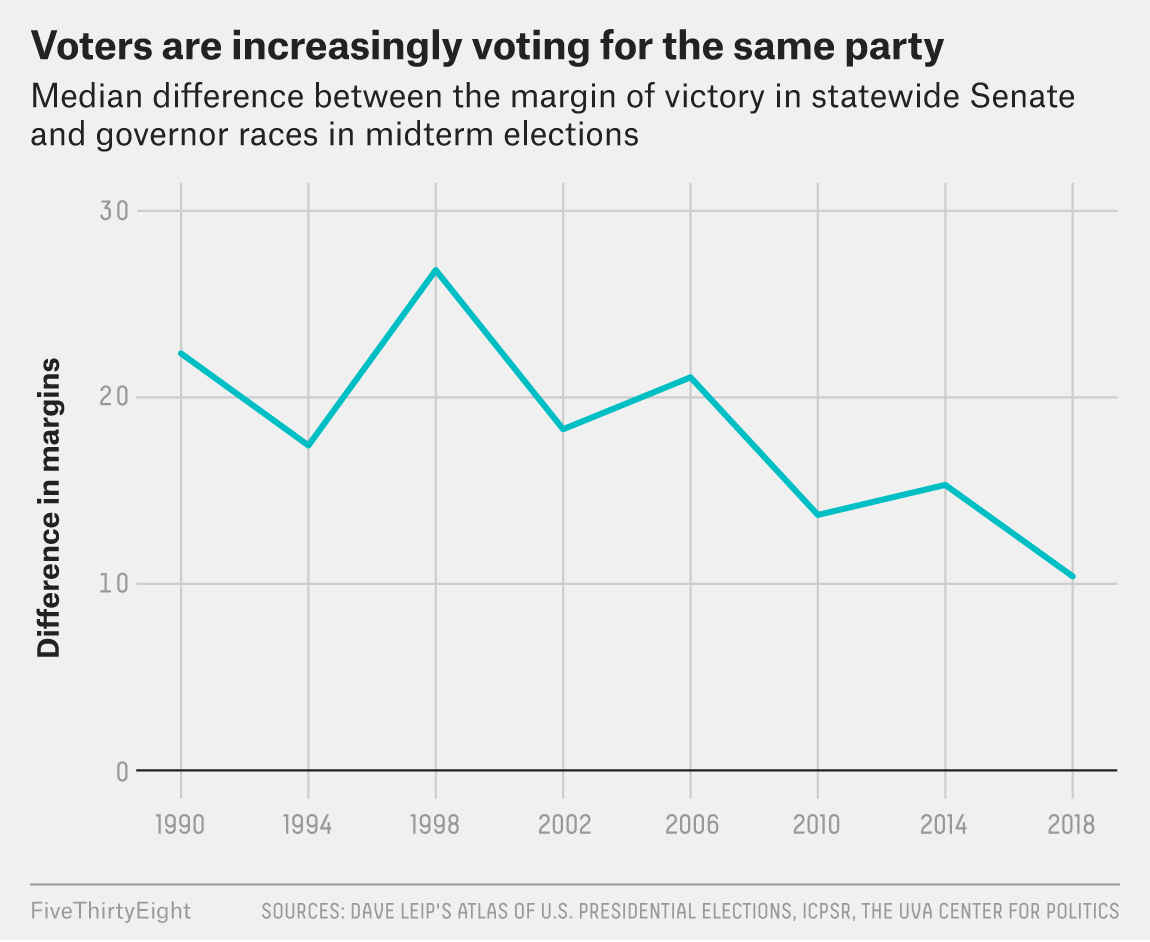 As you can see, even though 2018 has the lowest mark in the past three decades, the median difference from election cycle to election cycle has bounced around. Still, the overall trend is one of decline, at least since 1998. You might wonder why there are fairly regular ups and downs in the chart, but this can be explained by the number of elected governors running for re-election in each cycle.

For example, only eight incumbent governors ran in the 24 states included in my calculations for 2010, whereas in the 2014 cycle there were 16 states with incumbent governors. And what I found was cycles with fewer incumbent governors running tended to show less evidence of split-ticket voting (a lower median) while cycles with more incumbents demonstrated more evidence of split-ticket voting (a slightly higher median). Part of this is because governors often benefit from an incumbency advantage. As my colleague Nate Silver pointed out in his introduction to FiveThirtyEight’s governor forecast, partisanship explains less in gubernatorial elections than it does in federal contests, and therefore, incumbency might matter slightly more for governors than it does in either the House or Senate.

No matter which way you cut it, the difference between the margins in a state’s gubernatorial and Senate races has shrunk. More voters are casting straight-ticket ballots. There are exceptions, of course, but this shift matches what we know about the larger electoral picture: voters are more partisan and the country is more divided than it’s ever been in the modern era of U.S. politics.

CORRECTION (Nov. 19, 2018, 2:30 p.m.): A table in an earlier version of this article incorrectly indicated that the Democratic Senate candidate in Arizona, Kyrsten Sinema, was the incumbent. The race was for the seat that Republican Sen. Jeff Flake is retiring from.