The U.S. is getting older — fast. Nearly 300,000 Americans are turning 65 each month; a decade from now, according to official projections, nearly one in five Americans will be what is typically considered retirement age. The graying of the population has huge implications for politics, the economy and society at large.

But as new census data shows, those challenges aren’t equally distributed: Although virtually the entire country has grown older since 2010, some places are aging much faster than others. And some places have large working-age populations to help support their growing number of seniors, while others, particularly rural counties, do not.

Take Sumter County, Florida, an area west of Orlando that includes The Villages, a retirement community that has been by far the fastest-growing city in the U.S. in recent years. Sumter County is easily the grayest county in the country: Nearly 53 percent of its residents are at least 65 years old; no other county has a population that’s even 40 percent seniors. 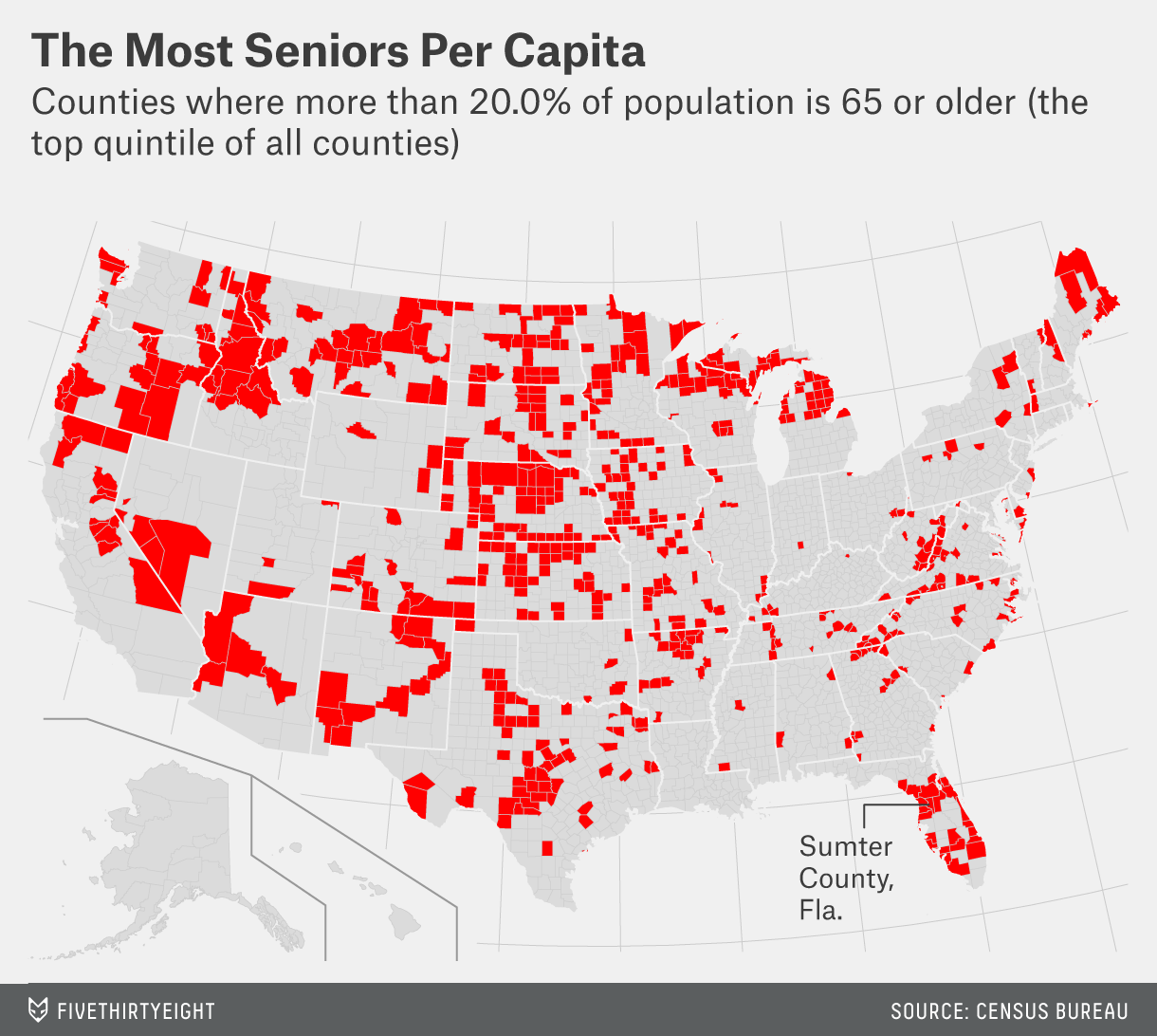 Sumter County is hardly typical, however. As the map above shows, the oldest counties are concentrated in sparsely populated rural areas, particularly in the middle of the country.1 Banner County, Nebraska, a tiny county on the Wyoming border, has been the fastest-aging county in the country in recent years: Nearly 30 percent of its roughly 800 residents were 65 or older in 2014, up from 20 percent in 2010. 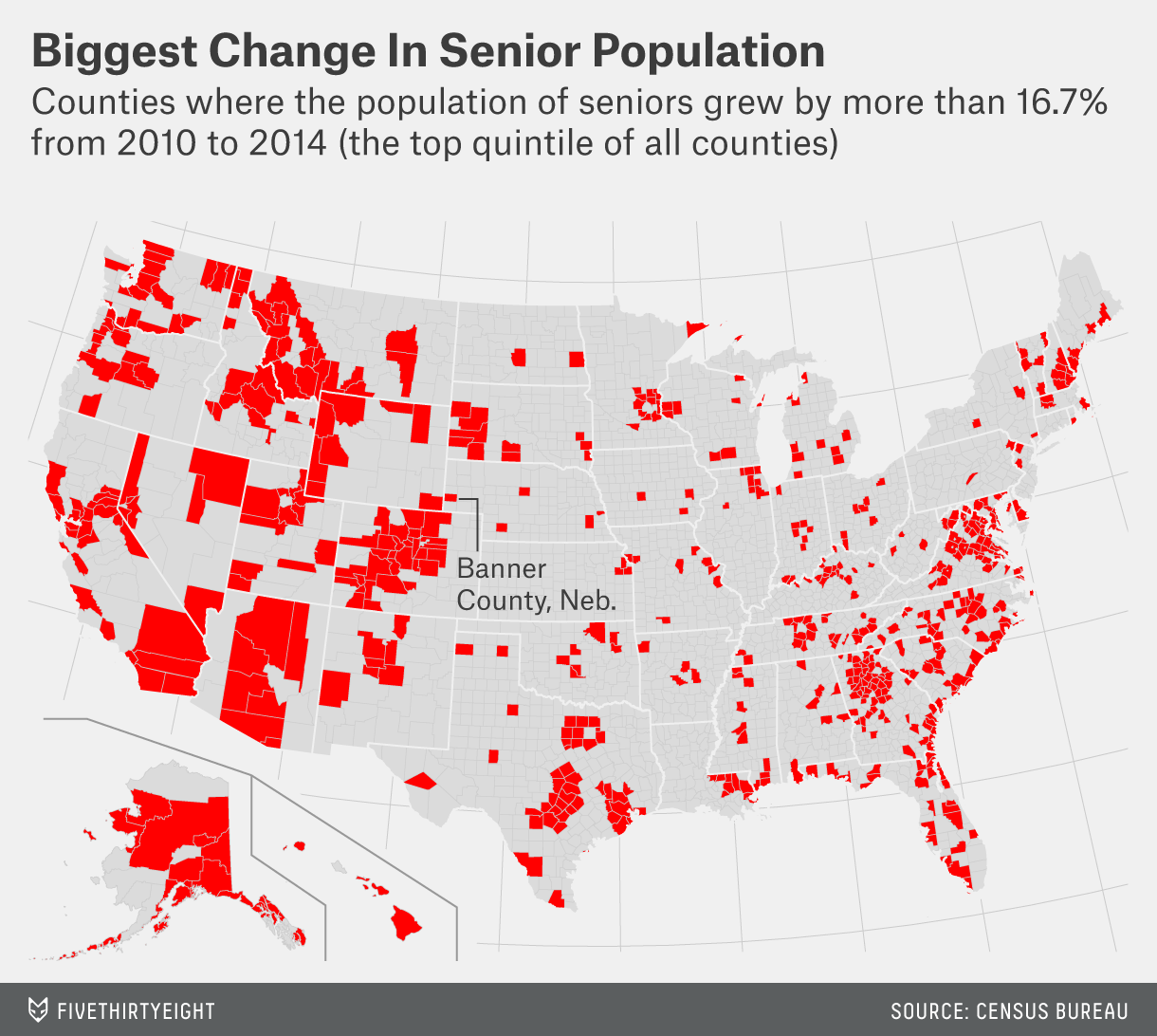 Banner County, like many fast-aging counties, is getting older in large part because its working-age residents are leaving. Less than half of Banner County’s residents are 20 to 64 years old, and its working-age population has fallen since 2010 even as its overall population has grown. With few good jobs available, small towns across America have been losing workers for years. 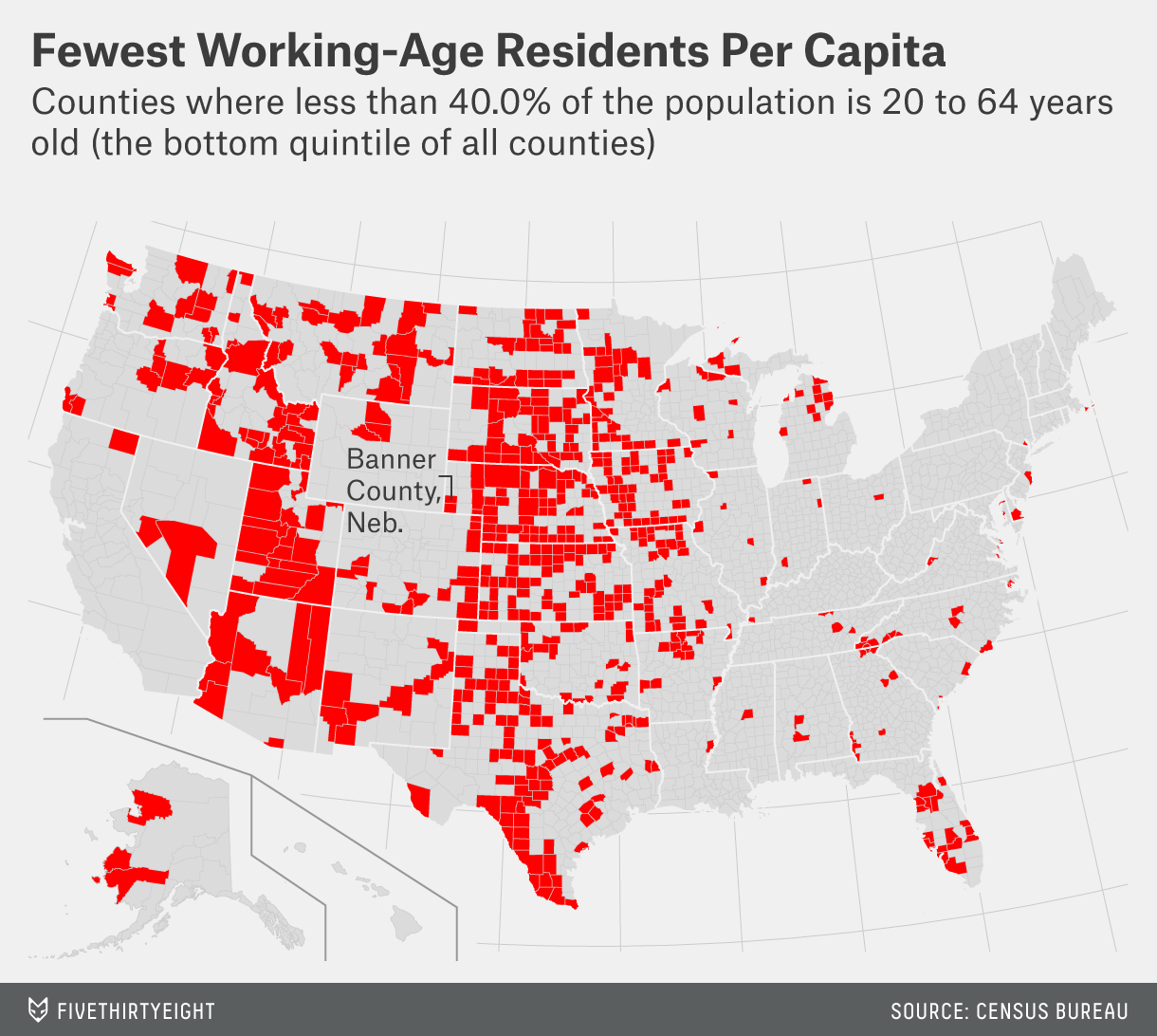 Big urban areas, by contrast, have seen strong job growth, and as a result have large working-age populations to support their seniors. More than two-thirds of New York’s Manhattan residents, for example, are in the 20 to 64 age group, and roughly half are in what economists consider the prime working years, 25 to 54. Most other big cities have similarly large working populations. 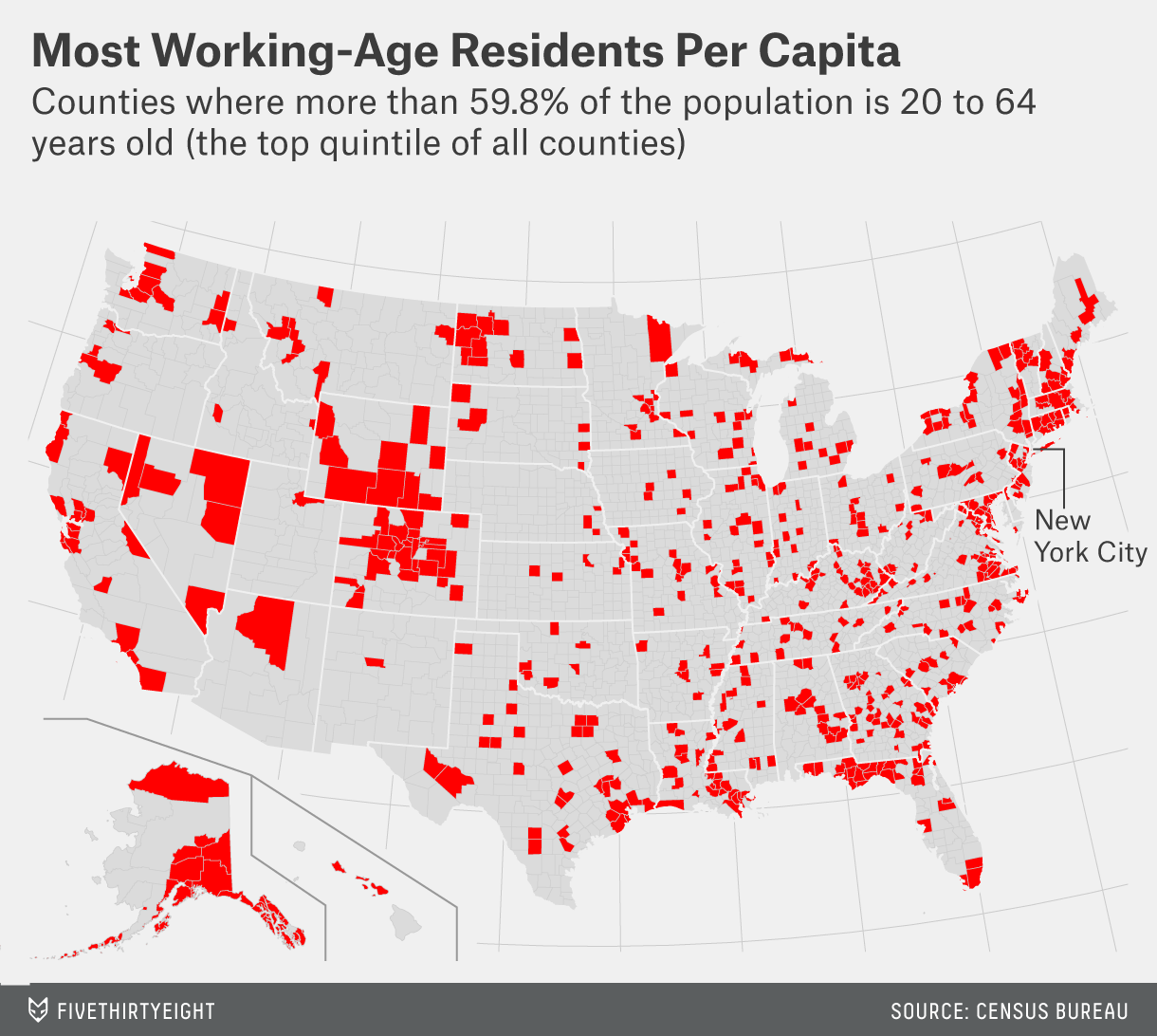 Lastly, some counties are growing younger, largely because their residents are having lots of children. Utah particularly stands out: In 27 of its 29 counties, more than a quarter of the population is younger than 20. 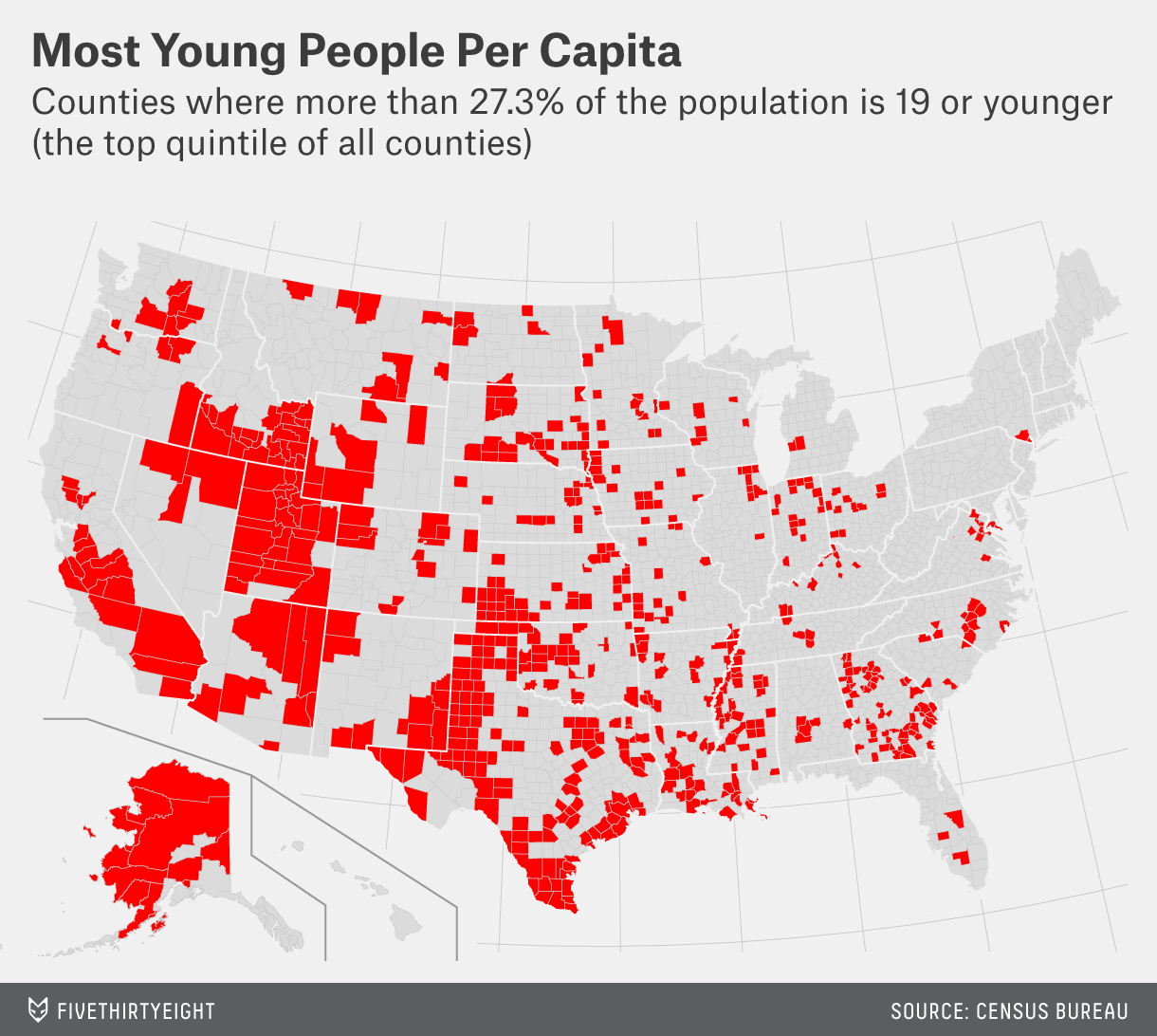