Last week, prompted by ESPN’s new “30 for 30” documentary on the “Bad Boys” Detroit Pistons, I examined the question of just how “bad” the Bad Boys really were. In that piece, I used relative technical foul rates as a proxy for “badness” to establish that the Bad Boys Pistons teams did, indeed, deserve that moniker. Their two championship squads were two of the “baddest” teams in the past few decades, earning more technical fouls relative to their peers than any other teams since 1982. But one question lingers: Were they so good because they were so bad, or in spite of it?

To find out, I looked at 30 years’ worth of the league’s correlation between technical fouls and winning. Technicals are the NBA’s official in-game punishment for conduct that the league and officials deem “unsportsmanlike” (short of a flagrant foul), which is why we’re using it as our proxy for badness.1 They, of course, have the immediate and measurable result of giving the other team one free throw by the shooter of its choice — worth around .85 points on average.2

Despite that negative consequence, teams that get more technical fouls than average tend to be pretty good. What’s more, the more technicals they earn, the more likely they are to be even better.

Here’s a plot of the number of technical fouls (badness) a team had relative to the league average that year against its win percentage (goodness). The data below is pulled from all team seasons since 1982-83,3 showing only those that were badder than average. 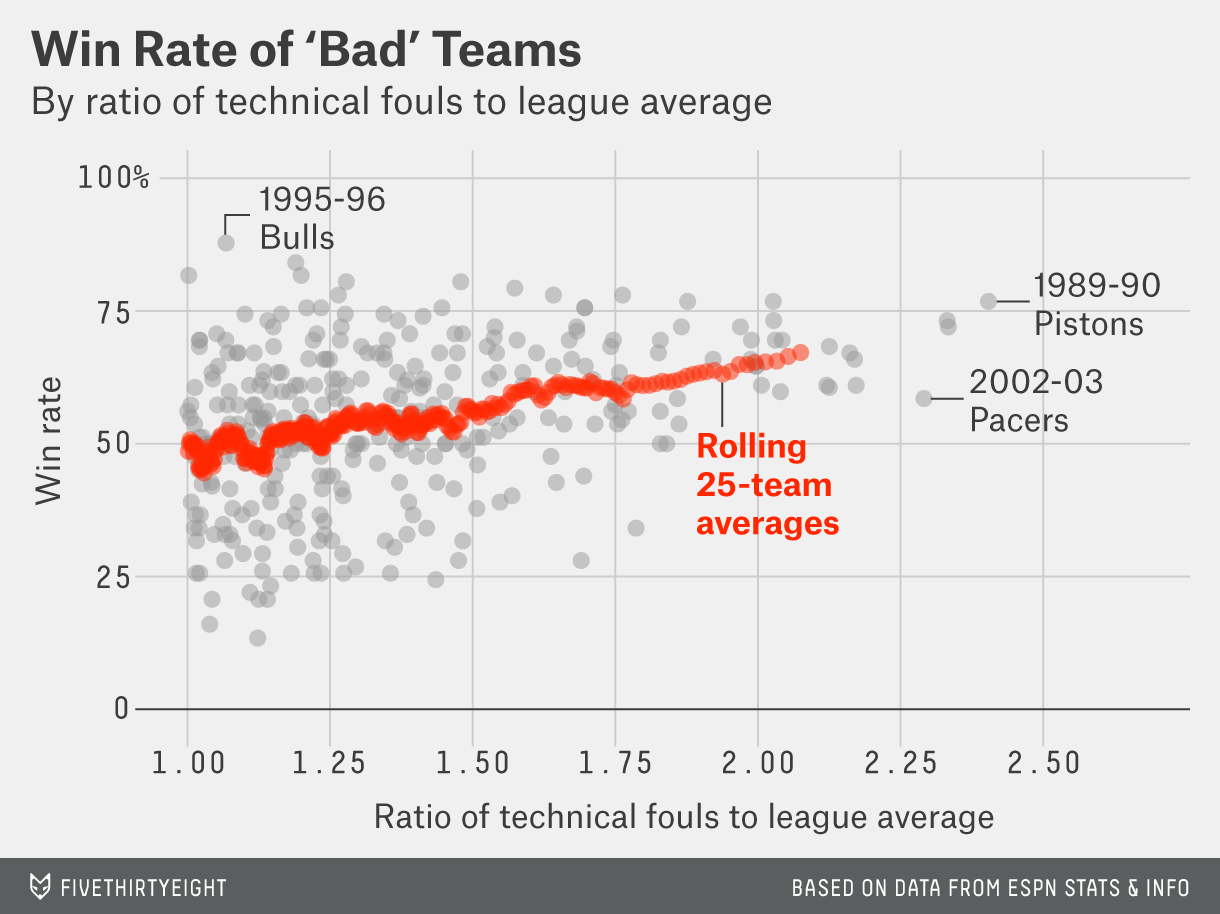 Look at the red dots, which are rolling 25-team averages. As the teams get more techs — or get badder — their winning percentages increase. That’s intriguing, as is the fact that the top 26 baddest teams in the data set all had winning records. Overall, 63 percent of these bad teams were good enough to have a winning record, and the top 100 of them had an average winning percentage of 60.3 percent.4

But finding a relationship in one season isn’t enough. The real test is whether the metric predicts performance in other seasons.5 Below you’ll find a graph showing how technical fouls predict team strength in neighboring seasons, and how they compare to a variety of other popular metrics. For strength, we’ll use SRS, or “Simple Rating System,” which is a team’s average margin of victory adjusted for strength of schedule6: 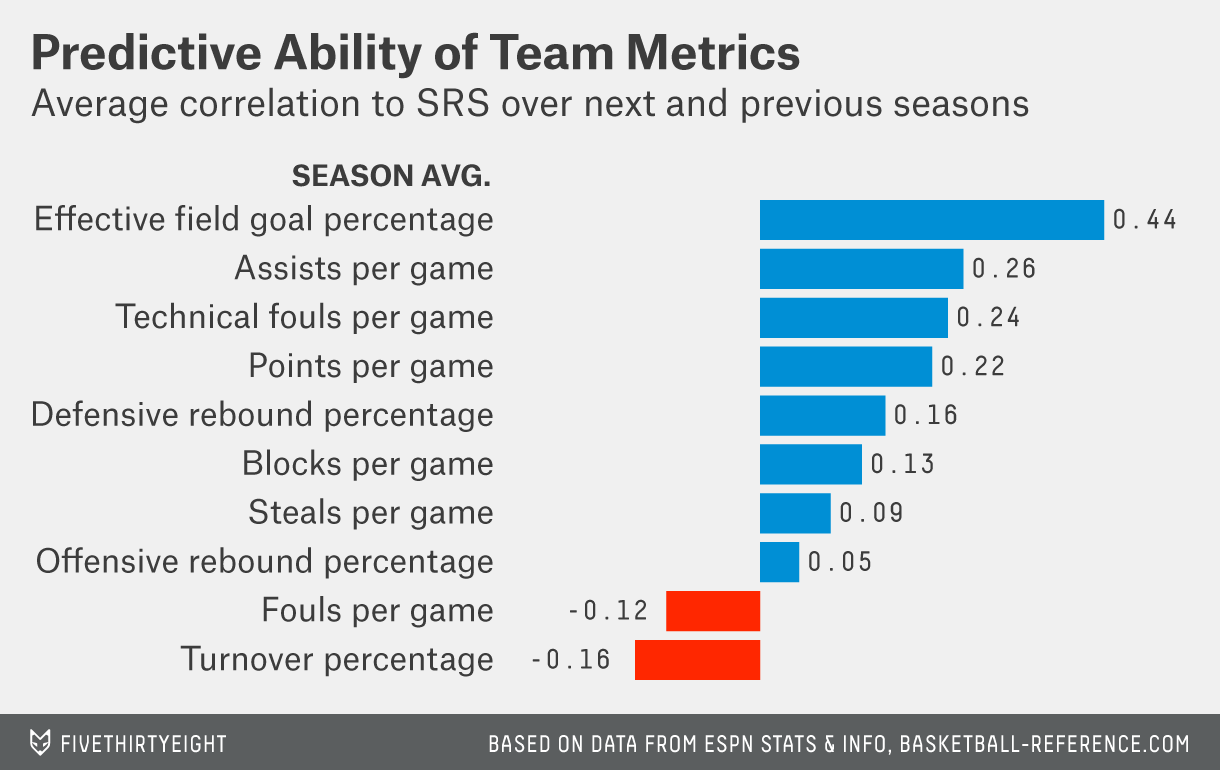 Effective field goal percentage comes out on top of this group, but technical foul rate holds its own, coming out as a better predictor of past or future team strength than stats stalwarts like points per game or rebounding percentage.7

That’s a bit wacky — the technical foul, remember, can’t provide value directly, because it gives up .85 points (on average) to the opposition. From where I sit, then, there are two potential kinds of explanation:

So far my research hasn’t turned up any smoking gun proving the case one way or the other, but on balance I’d say the results are more consistent with the second option: Technical fouls exist to deter certain types of unsportsmanlike behavior, but if those behaviors are broadly advantageous (by intimidating or hurting the opponent, for example), they could be “priced incorrectly” at only (roughly) -.85 points each.9

That something ostensibly negative can ultimately be predictive of something positive (or vice versa) isn’t an unheard of dynamic in sports. For instance:

But it’s unusual in basketball for an event with a negative impact to have a positive correlation with team strength. Take a look at some other things that have a direct impact on the game that’s similar to that of technical fouls (slightly above or below -1 point each): 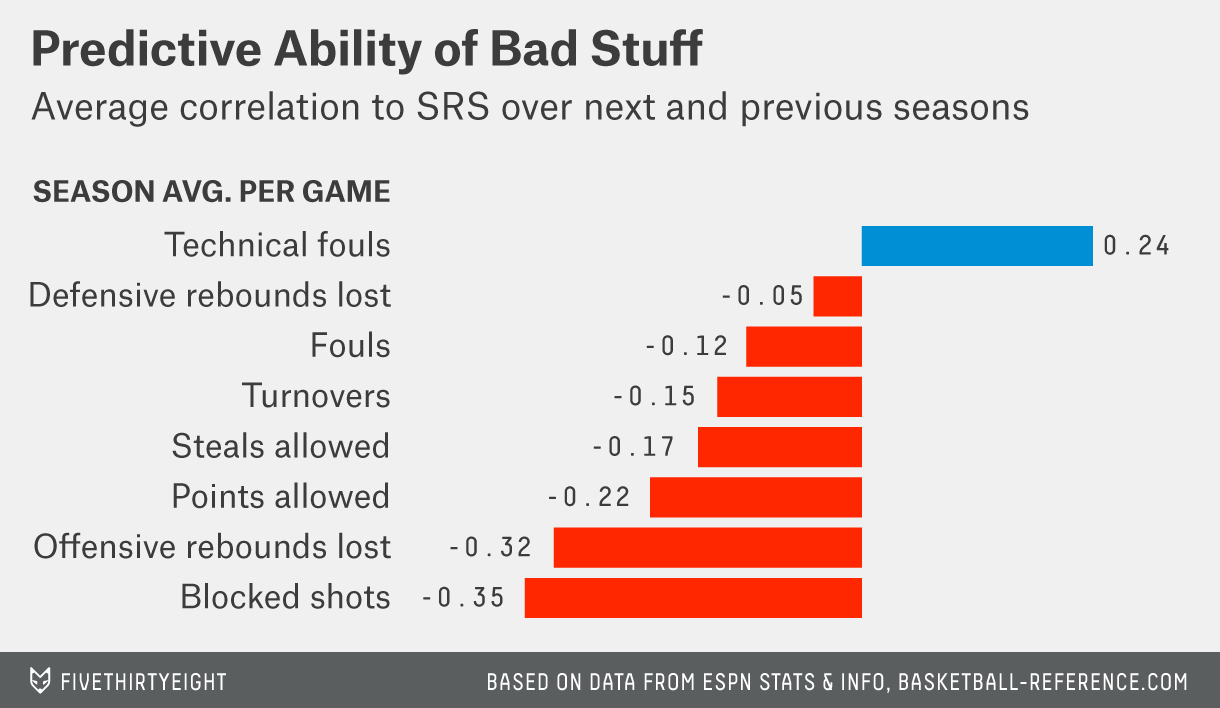 If everything else were equal, we would probably expect technicals to be in the same range as turnovers or steals, so the total gap from where they ought to be based on in-game value and where they actually are, predictively, is massive.10

But even if we’re satisfied that technicals can predict wins, there’s still something we haven’t considered yet: Wins may predict technicals.11 This theory has a few possible scenarios associated with it, such as: Teams that are in contention are playing hard all the time — so hard that they occasionally earn a technical — while teams that are out of contention don’t really care enough to do “whatever it takes” to win.

That kind of explanation is intuitively appealing, both because the scenario has a plausible ring to it and because it’s the sort of unsexy answer you often find when you try to explain a strange result.

To test this theory, I looked at play-by-play data over the last four years, which breaks fouls — including technicals — down by type. That yielded 1,963 player techs, 422 coach techs, 278 flagrants (similar to the technical, but with a much harsher punishment), and 2,448 three-second violations.12

I combined all that with in-game win percentage calculations provided by Dean Oliver of ESPN Stats & Info, estimating the foul-committing team’s chances of winning before and after the foul (including the resulting free-throw).13 We’re interested in the difference between what that foul did to a team’s projected results and its actual results.

Averaging across all plays, we can represent the results of this comparison in a slope chart that shows how the team’s chances should have changed in that moment, and how often it actually ended up winning. 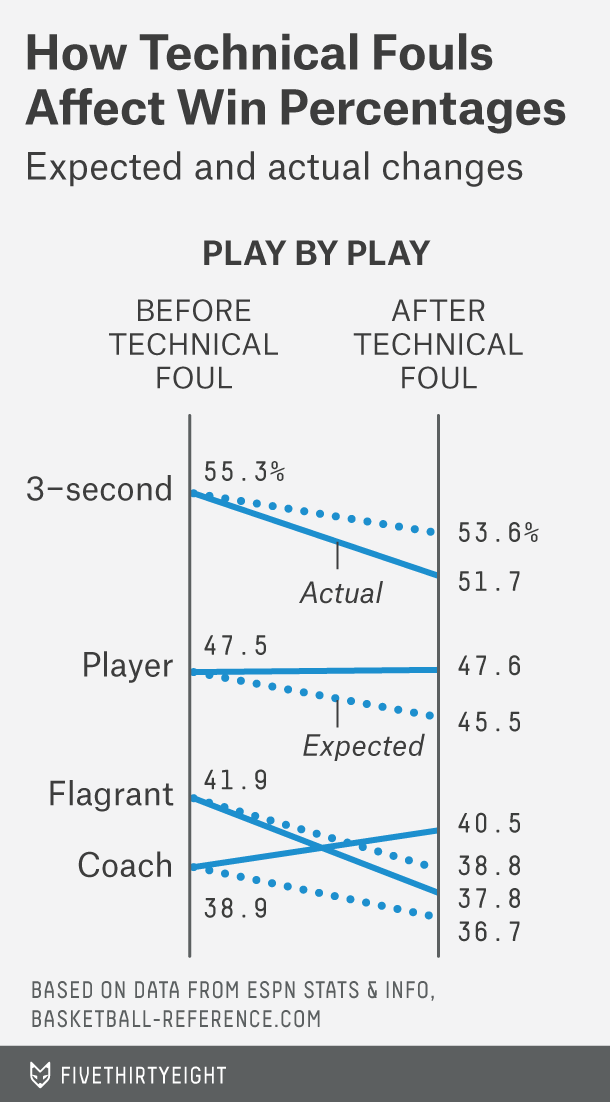 Take note of those two (well, four) lines for player and coach techs. Both player and coach technicals ostensibly cost teams about a 1.8 percent chance of winning the game, which is what we would expect based on the surrendered free throw. But the actual win percentages of technical-foul-getting teams appear much higher than we would expect. Teams ended up winning 2.1 percent more often than expected after player techs, and 3.8 percent more often than expected after coach techs.14

While this result supports our finding that technical fouls predict winning over an even larger number of observations, it’s also consistent with either type of explanation for why this is so. If there were any bias in how technical fouls are distributed — as suggested by the “wins predict technicals” theory — unfortunately it would still bias these results.

But there’s something we can do to avoid that. Instead of computing the averages in that chart across every single foul, we can compute them on a team-by-team basis first, and then average the result across all teams equally — treating each team’s results as one data point regardless of how many technical fouls it received. That helps us avoid potentially skewed data if different types of teams (like winning teams) are more likely to get technicals in the first place. When we do that, here’s what we get (the new chart is on the right, with the old one on the left for comparison’s sake): 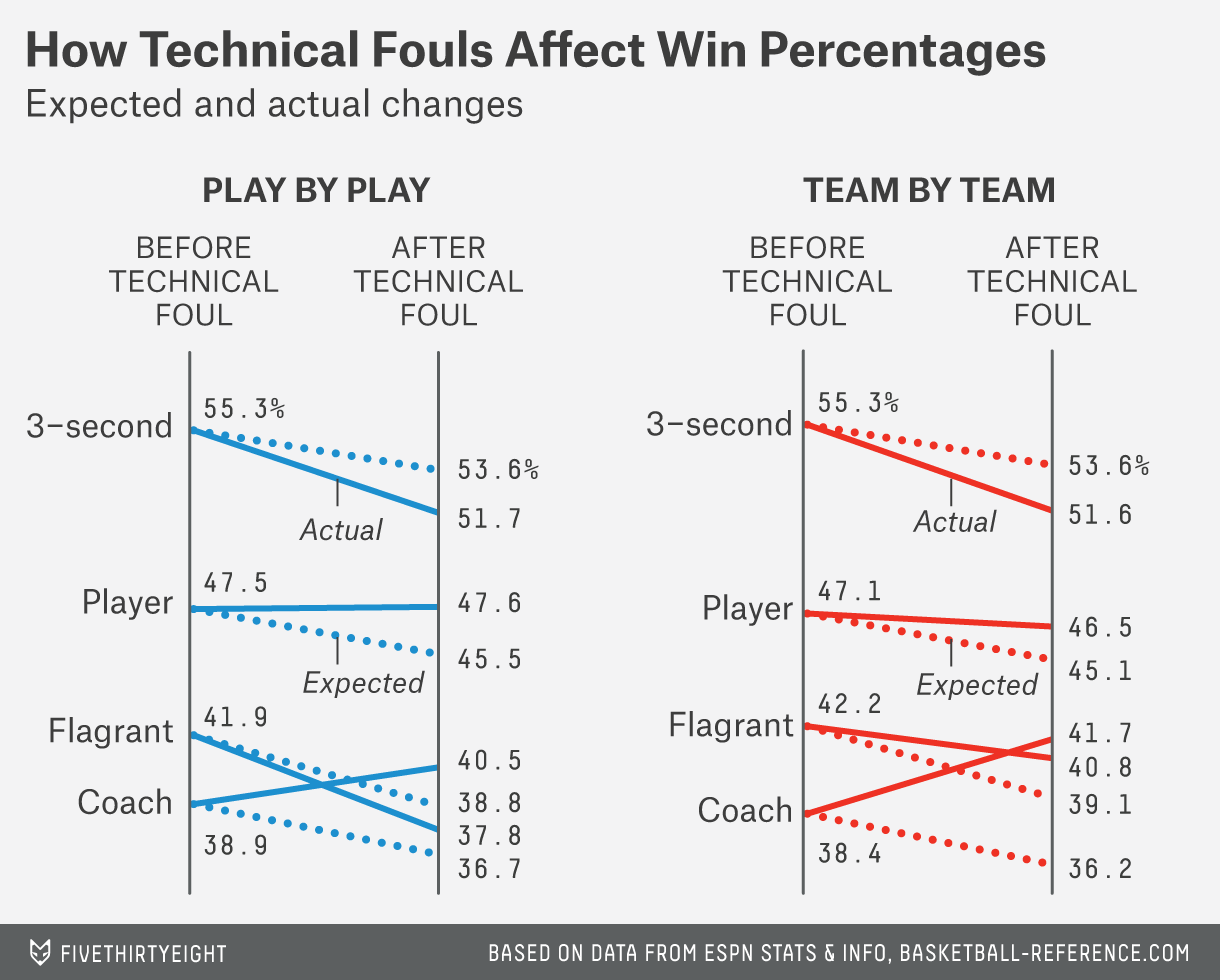 To illustrate: If one great team, let’s call it SuperBad, earned every technical foul every year, but by virtue of being a great team won 5 percent more often than its expected win percentage would suggest, that would show up as a 5 percent gain in the chart on the left. (That’s because each time a team got a technical it won 5 percent more often, even though it was the same team every time, and even if the winning was unrelated.) But when averaged across all 30 teams in the league, it would only show a 0.16 percent gain in the chart on the right (SuperBad team ran 5 percent above average when getting a technical, but the other 29 teams ran 0 percent better15). This would be a perfect “winning begets technicals” scenario.

The charts above seem much much closer to this second “technicals beget winning” scenario, as there doesn’t appear to be much difference whether we aggregate by plays or by teams. Indeed, the main reason this isn’t a smoking gun is that the sample size for the right-hand chart is only 120 team seasons, which would normally be much too small to even attempt to draw conclusions about differences of only a couple of percentage points either way. But being so consistent with the much larger sample of the play-by-play chart is powerful corroboration.

Here are a few other things that cut against the “winning predicts technicals” theory:

Finally, let’s return to the question that kicked off the piece: Were the Bad Boys Pistons so good because they were so bad, or in spite of it?

Based on what I’ve looked at so far, I’d say the former has the stronger case: While technical fouls can’t lead directly to winning, the types of behavior that lead to technical fouls just may.