The NFL is down to its final four Super Bowl contenders, and it’s quite a group. All of them are division winners, and each has 13 wins on the ledger. Picking a favorite is tricky. The New England Patriots are a tempting choice, having led the NFL in SRS (“Simple Rating System,” or margin of victory adjusted for strength of schedule), as well as having been one of the greatest dynasties in NFL history. Yet the other three teams have all won championships more recently. The AFC championship game features an old rivalry with a new face. And the NFC championship arguably features the league’s best offense against the league’s best defense. So, you know, this weekend should be boring.

According to bookmakers, the weakest of these teams — by a healthy margin — is the Indianapolis Colts. Futures markets give them about 15-2 odds to win it all. After accounting for house advantage, that implies that gamblers thinks the Colts have about a 10 percent chance of hoisting the Lombardi Trophy on Feb. 1.

It’s fitting that the biggest underdogs left in the playoffs are led by Andrew Luck — the Hacker Gods’ vicar on Earth — who seems to be on a mission to prove that you have to be willing to lose to win.

Whether Luck’s relentless approach will translate into playoff glory remains to be seen. But in the meantime, there’s good news and bad news for the Colts.

The Colts have faced the toughest road of the teams left standing. Last week in this column, I examined the “trial by fire” effect in the NFL playoffs — the phenomenon by which wild-card-round veterans appear to get stronger and stronger the deeper they go into the playoffs.2

For example, of the 24 wild-card-round veterans who made it to the conference championships since 1994, eight have gone on to win the Super Bowl (including seven of 20 who faced a top-2 seed in every round). For a road team, having a 1-3 chance of winning the Super Bowl with two games to go is ridiculous: Road teams in the playoffs normally have only about a 1-3 chance of winning their next game.

After two solid victories against strong teams (beating the Cincinnati Bengals — a fellow five-loss team — and the heavily favored Peyton-Manning-led Broncos in Denver, each by double digits), the Colts’ stats suddenly look a lot better than they did when they were getting thrashed by the Dallas Cowboys a few weeks ago.

You can see how those wins have changed the Colts’ fortunes in the chart below. I plotted winning efficiency vs. scoring efficiency — generally the two main modes of statistical analysis in football.3 I’ve then compared where each playoff team stood at the start of the playoffs to where they stand now (upper right is better): 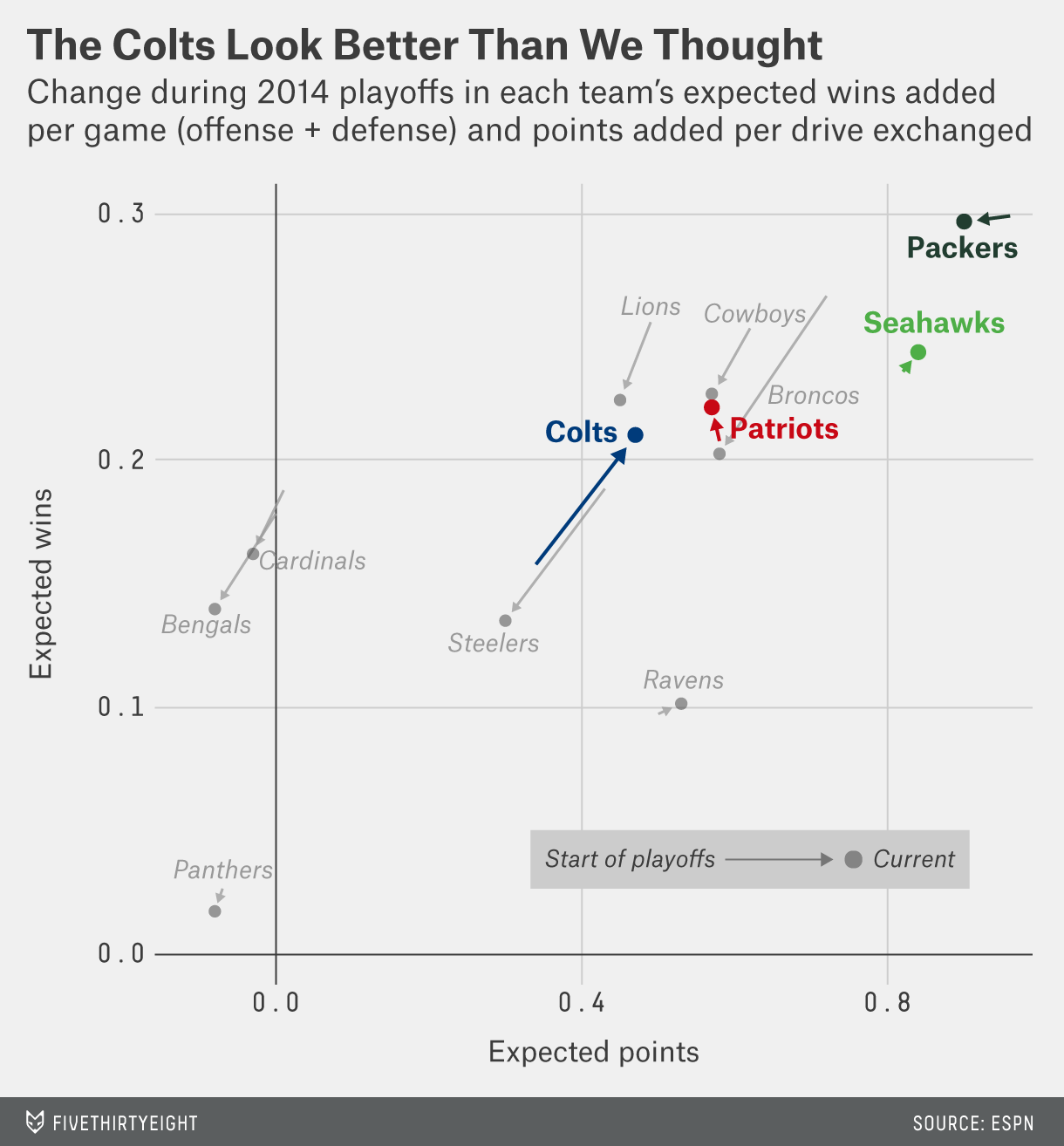 As you can see, the Colts have made the biggest positive move by a long shot. This is what the “trial by fire” phenomenon is all about: Since the Colts have taken the hardest road to get where they are, we’ve learned more about them.

And what’s crazy is that this movement may underestimate what we’ve really learned. Unlike Elo ratings or SRS, these EPA and WPA metrics don’t account for strength of opponent (though ESPN’s model does account for playing on the road). It also treats the Colts’ playoff games as being just as important as their regular-season games, which empirically doesn’t seem to be the case (as I mentioned last week, we’re going on at least 20-plus years now where playoff games have been between two and five times as important as regular-season ones, depending on your assumptions).

Of course, the other remaining playoff teams have won to get where they are as well. But think of it like this: If the chart underestimates each team’s movement, each arrow could be twice as long, and then we’d see a very different picture — the Colts might even leapfrog the Patriots. As it stands, the Colts have closed much of the gap between themselves and the favorites anyway, and may very well deserve to be right there with them.

But are they good enough to win a Super Bowl? Here’s a plot of every team that had positive WPA and EPA stats entering the playoffs since 1994. I’ve marked Super Bowl winners in dark gray and present-year (eliminated) teams with empty circles: 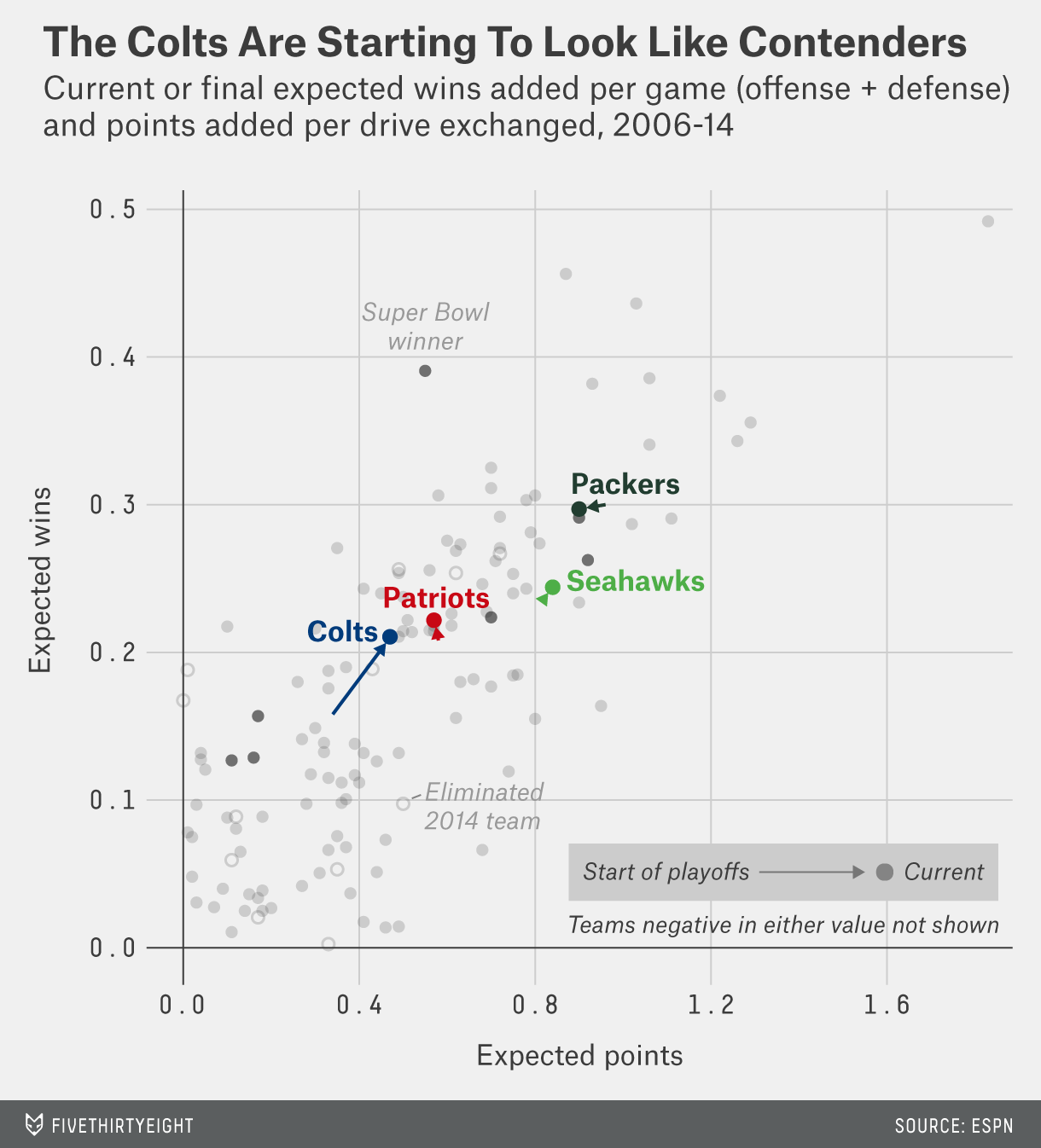 The Colts are well within “contender” range, and the teams ahead of them aren’t historically dominant.

And the Green Bay Packers, tops in each metric, shouldn’t get complacent. Only three of 14 teams with better EPA have won championships, and two of 16 teams with higher WPA have won, and just one of the unlucky nine teams that were better on both axes won. Now, obviously the Packers are already into the third round of the playoffs, so we’d probably expect their chances to be a bit better than other teams in their neighborhood — but even accounting for that, a team of their strength at this stage hasn’t done any better than the average “trial by fire” team in the same spot.

So things are looking up for Luck and crew: They’re a stronger-than-normal wild-card-round veteran playing against slightly weaker-than-normal dominant teams. Great.

And now for the bad news

The bad news is that the Colts have to play the Patriots, who eliminated them from the playoffs in last year’s divisional round, 43-22, and then dropped another 40 points on the Colts in their 42-20 Week 11 victory in Indianapolis (to add insult, the Colts were also coming off of a bye).

So in the past year, in one home and one away game, the Patriots have won twice and outscored the Colts 85-42.

But does this matter? Figuring out just how predictive “prequel” games can be (relative to other metrics) is a surprisingly thorny issue. Here are a few of the difficulties:

That said, there are a few things that we can probably extrapolate — at least as being supported by the data, if not proved by it — from looking at the equivalent scenarios. So let’s start with teams that played each other twice in the regular season vs. teams that didn’t play each other at all: 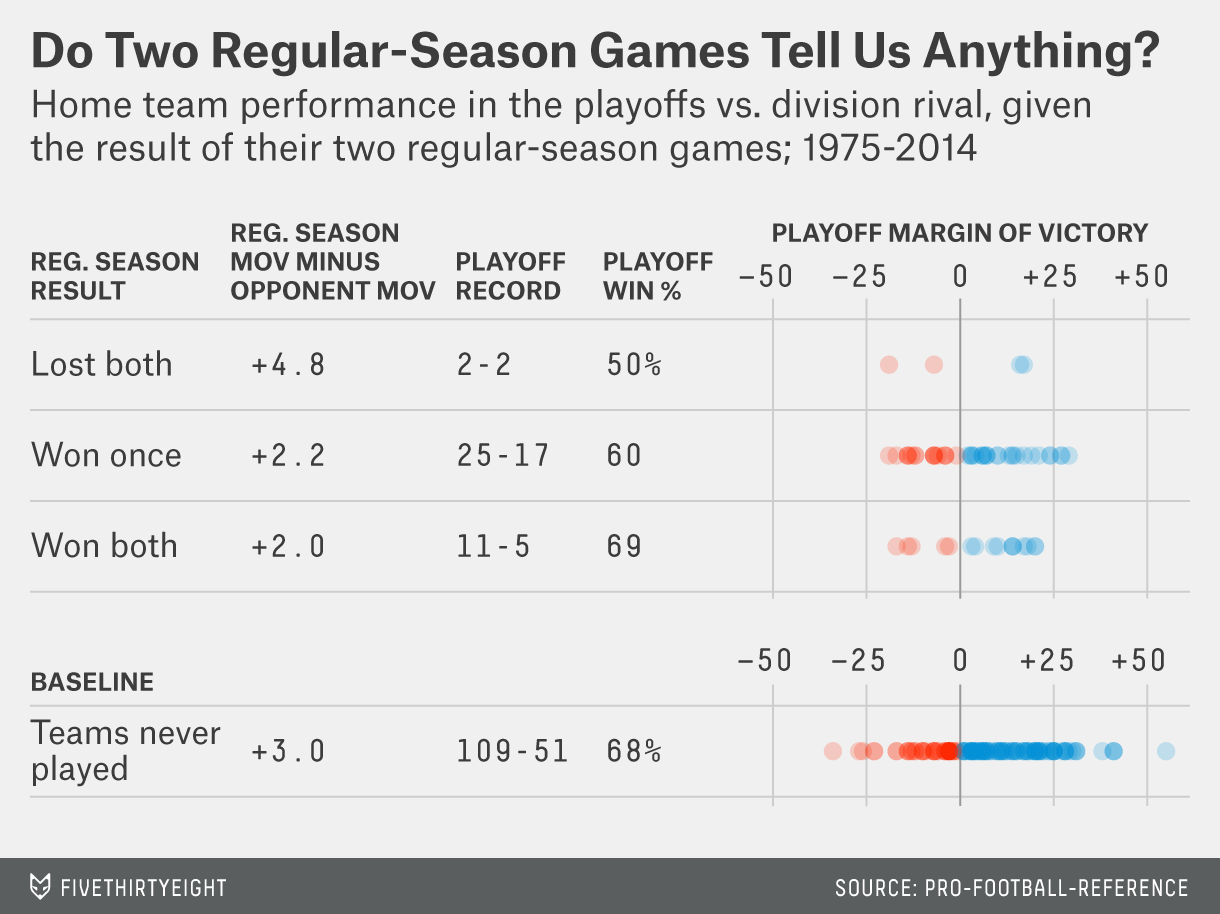 Cases where the home team in the playoffs lost both regular-season games are too rare to give them any weight (though they do favor the regular-season victor). The most salient point is that playoff home teams that beat their opponents twice (as opposed to just once) in the regular season win about 9 percentage points more often (68.8 percent vs. 59.5 percent). This also doesn’t appear to have anything to do with the relative strength of the teams, because the sweeping teams have had a lower difference in margin of victory.5 In the baseline category — a game between teams that never played in the regular season — the home team has won in the playoffs 68 percent of the time.

This suggests that matchups matter, at least in cases where a team goes 2/2 against their opponents. But what about cases where they only played one game? These have the added wrinkle that someone (almost always) had home-field advantage in that game. So the scenarios look like this: 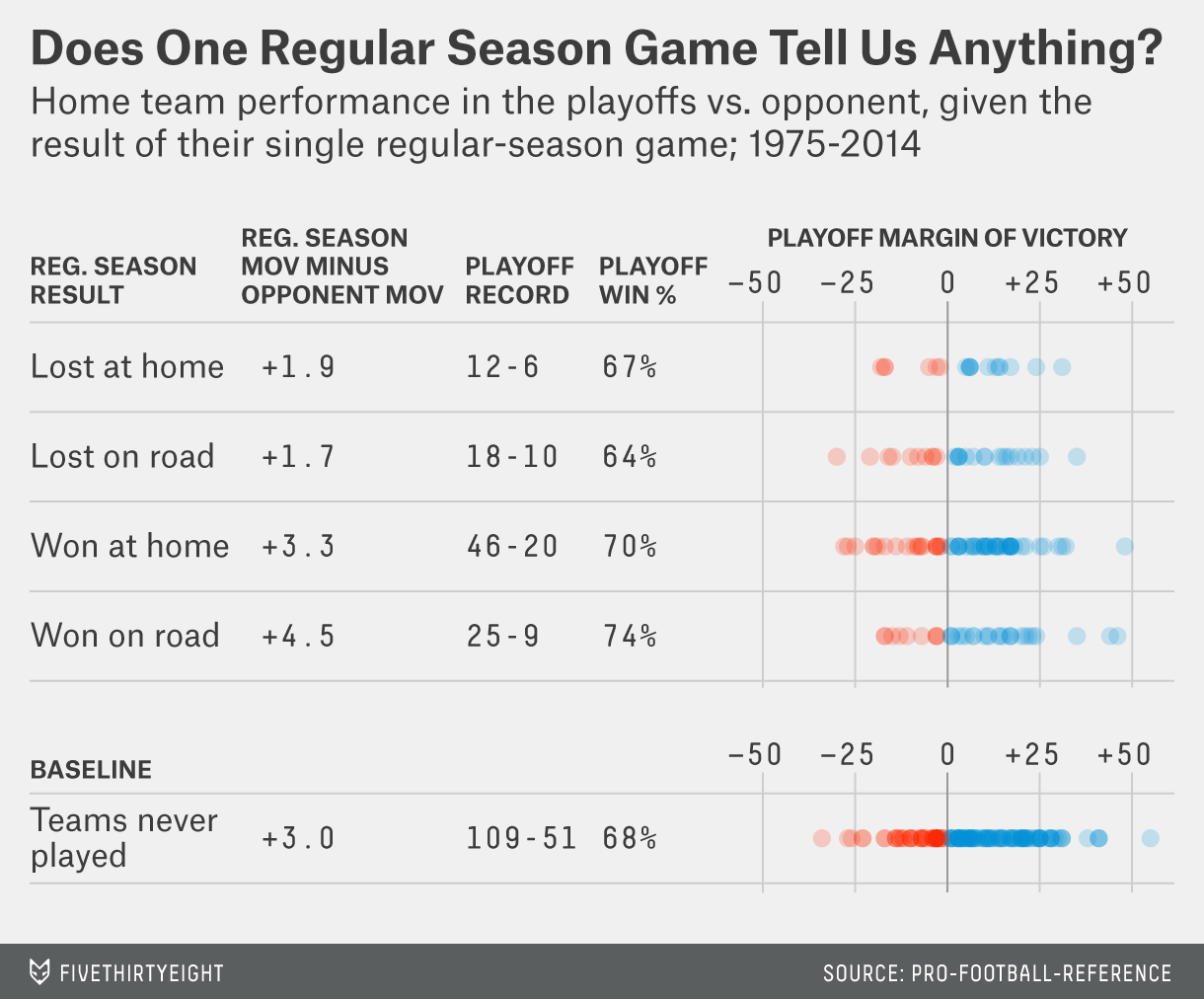 The differences here are smaller — as we would expect, and they comport pretty closely with the relative overall strengths of the teams in question — though there’s still some causal complexity (a single road win vs. a home loss can pretty much account for the observed difference in strength). You can contemplate the road/home performance and its relationship to margin of victory in the playoffs and ensuing results all day (I’ve spun my head around it plenty). But the bottom line is that playoff home teams that won their regular-season matchups against their playoff opponents on the road have won close to 75 percent of the time in the playoffs — the highest of any of these scenarios.

tl;dr: The Patriots beat the Colts 42-20 in Indianapolis this year. That’s not good news for Indianapolis.

But I’ll offer the same point I made about Carolina last week: While the situation looks bad, it will be especially meaningful if the Colts manage to win. If they pull off the upset against New England, not only will they have taken out the top two seeds in the AFC on the road to the Super Bowl, but they’ll have done it by avenging two losses from earlier in the year.