This is review No. 15 of 16 in the first round of our competition. Each review will compare four burritos, with my favorite advancing to Round 2.

From SoCal to NorCal, this week I trek through the state to eat from two trucks, a drive-in, and a top contender for best burrito in the country. 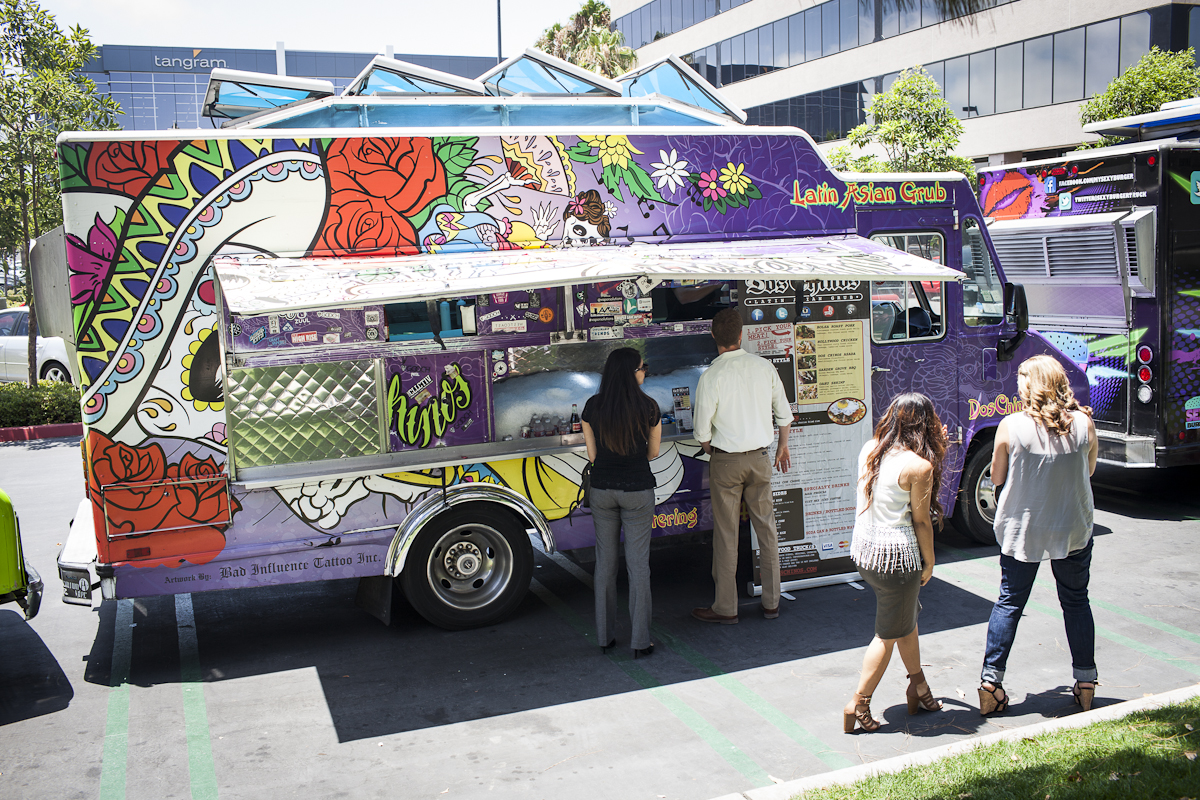 I found the Dos Chinos truck in the parking lot of a cluster of professional buildings — tall, ugly high rises packed with office workers — in Newport Beach. It was snuggled in between trucks called Sexy Burgers and Ragin’ Cajun (whose owner wears a tie made out of mardi gras beads). An impressive and colorful mural of calaveras dancing and playing the trumpet covered the side.

Unlike a lot of Asian-Mex fusion, this isn’t Asian flavors wrapped in a tortilla. Instead, each ingredient is carefully thought out to reflect two influences. Judging by the day I was there and online reviews, opinions vary greatly on the best burrito at Dos Chinos. Selections like Hollywood Chicken, Garden Grove BBQ, Bolsa BBQ Pork, Dos Chinos asada and Oahu shrimp all get nods, while secret menu items like the Stoner Burrito also get a lot of love.

I started with the Bolsa BBQ Pork, made with roasted pork belly. A half-pound of pork fat is probably more than any human should ingest in one go, and the pork belly lacked the promised crispness to keep it interesting. It was particularly unappealing on a hot day.

The Dos Chinos asada was the better pick. The entire bundle was acerbic and sweet from the house salsa verde. An abundance of rice filled the bottom half of the bundle (though the dissected burrito had a much more even distribution). The carne asada, made from ribeye, was tender and pink and bathed in “Vietnamese Chimichurri,” which tasted of lemongrass with no garlic to be found. The tortilla was dry and stiff before I could finish my meal. The flavors were intriguing and unique, but didn’t quite come together.

I took my order and sat in an enormous carpeted white tent set up next to the trucks. Just before I finished, a private security guard came to kick me and several other diners out. “Sorry folks, this is for a private party at the bank.” 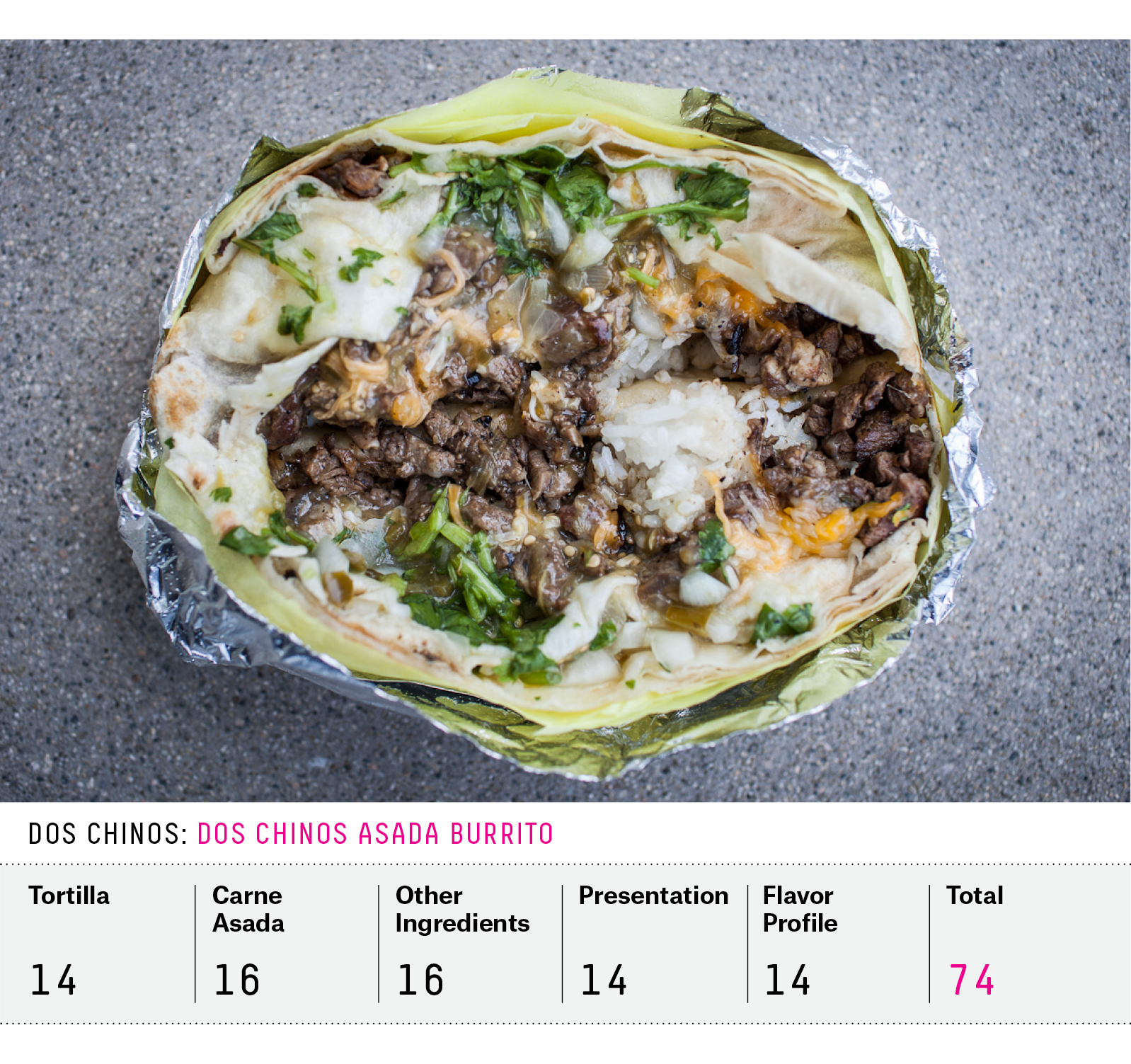 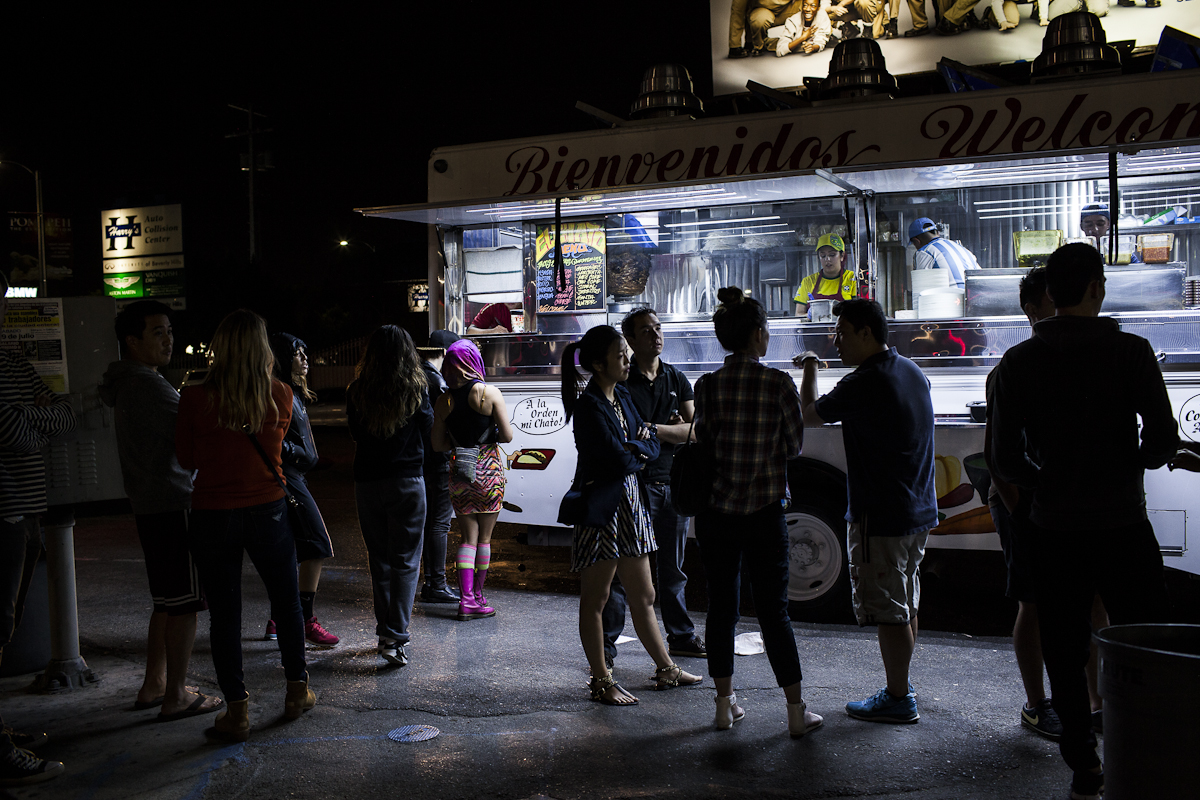 El Chato Taco Truck opens at 9 and closes at 3:30 … p.m. and a.m. If Yelp is to be believed, it’s a post-party solution to excessive alcohol consumption. But El Chato offers up flavorful versions of taqueria classics, suitable for discerning taste buds. Burrito Selection Committee member and “Ask a Mexican” columnist Gustavo Arellano calls it “the rare place where hipsters and Mexicans unite to get it right.”

The truck parks most nights at the corner of Olympic and La Brea Boulevards, in front of an auto repair shop. The remainder of the parking lot holds about a dozen vehicles during the day, but at night, patrons cram upwards of 20 cars into the tiny space, patiently edging by one another as they enter and exit. I arrived just after 9 p.m. to avoid the infamous crowds, but dozens of people were already lingering around waiting for their orders.

The al pastor is the crowd favorite, though Yelp reviewers give more love to organ meats here than they do to any other burrito-selling establishment in the bracket (I tend to think most organ meats are better in taco quantities). The truck offers up its array of fillings in quesadilla, burrito or taco form.

I ordered the al pastor, which was shaved off in tiny, succulent pieces, fatty and oily enough that it was also better suited to El Chato’s dainty tacos. There was nothing big or chunky in this burrito; everything was finely chopped into tiny morsels, including the biting white onion and the fresh cilantro. The tortilla was griddled to a toasty brown on the outside. Mushy Mexican rice was mixed with crunchy bits of corn and carrot. Each order comes with a small plastic cup of red salsa, which is smoky and dark in flavor, not ideal with the al pastor, but tasty. Ask for a plastic freezer bag, and fill up on spicy, lightly pickled onions from a large tub in front of the truck to cut through the grease. 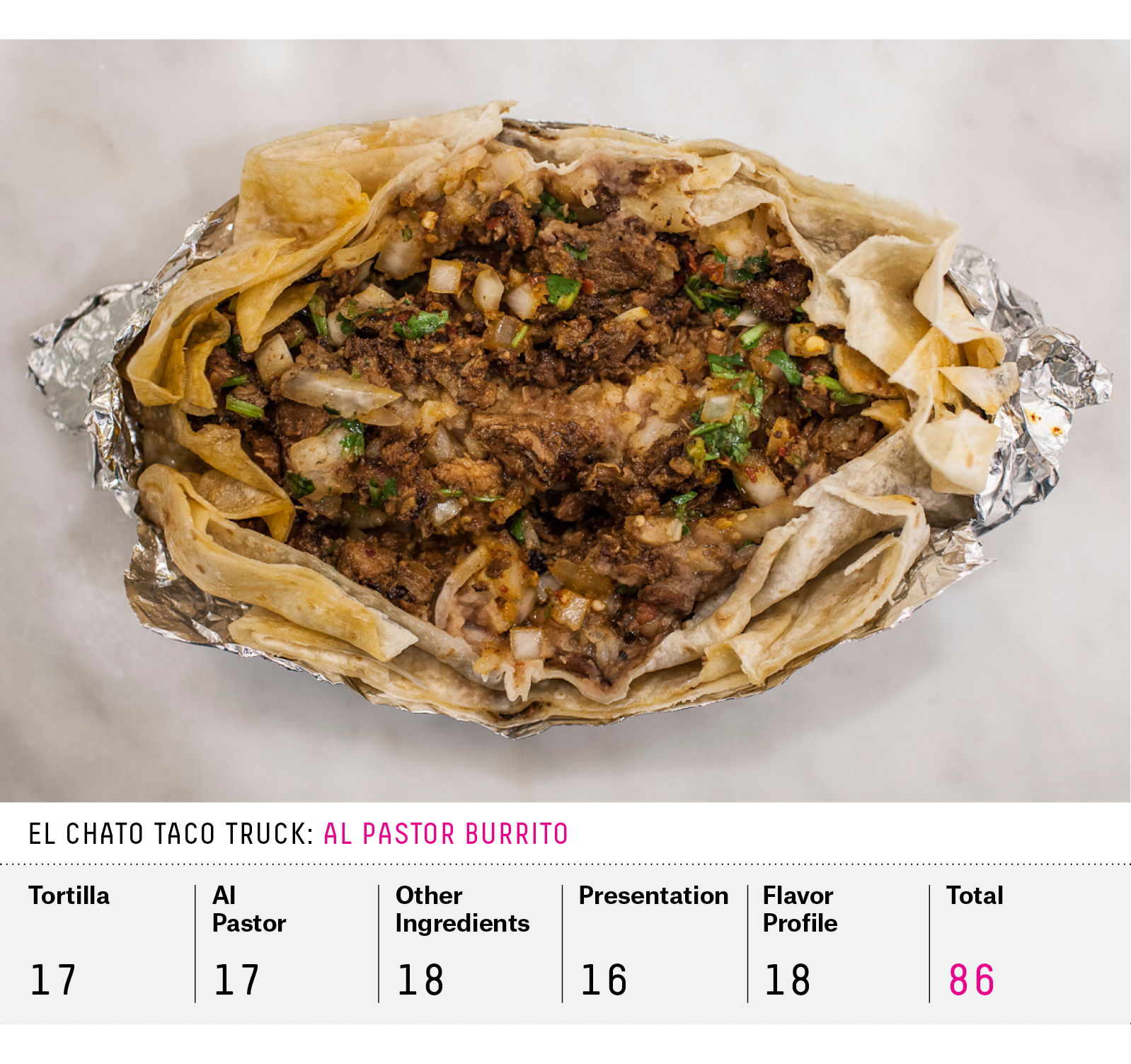 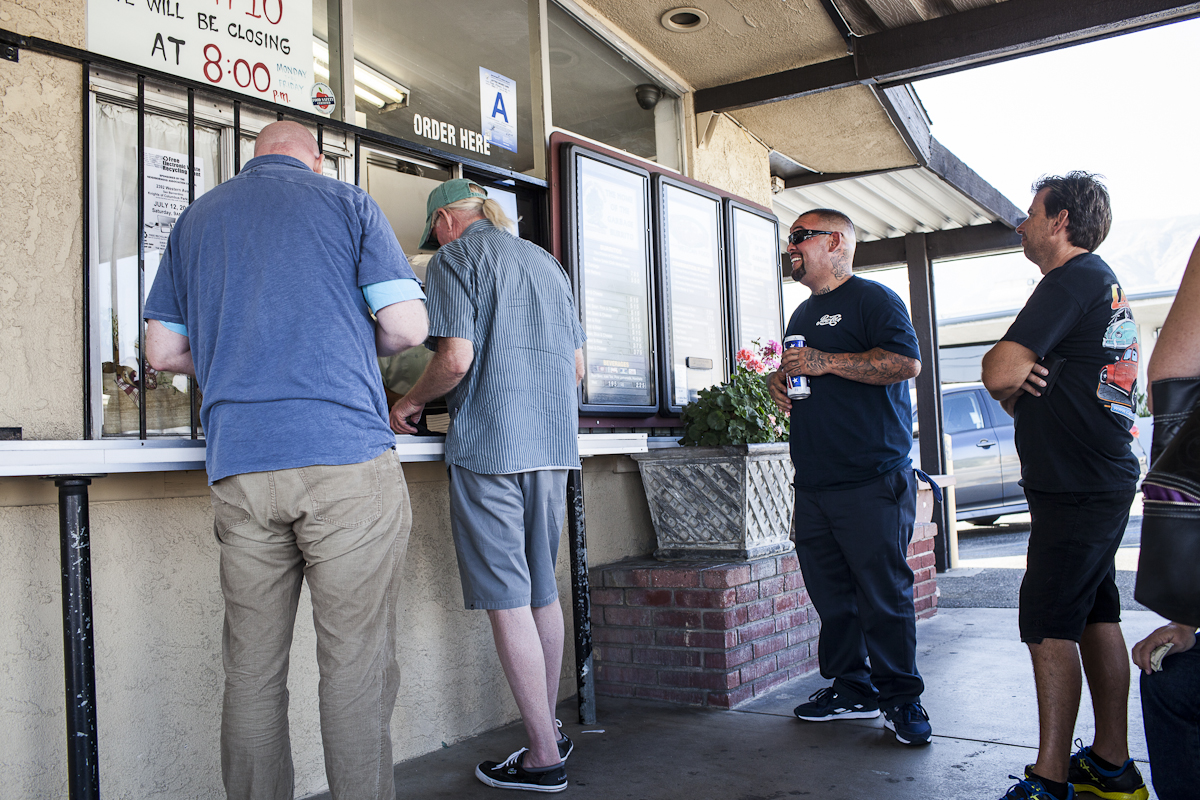 I initially turned my nose up at some of the inland selections in California for the Burrito Bracket. I know greatness hides in the most unexpected places, but we kicked out some seriously righteous burritos in the name of geographic diversity. I was deeply wrong to discriminate, however, and it was Rosa Maria’s that first put me in my place.

San Bernardino is located about 60 miles east of downtown Los Angeles, in an area known as the “Inland Empire.” It’s home to another famous drive in, the first McDonald’s, and was the largest city in the country ever to declare bankruptcy until Detroit earned that distinction last year. But if you didn’t know any of that, it just feels like a sleepy, working-class town with beautiful mountain views. Rosa Maria’s is on the northern edge, and harkens back to a different era. It’s the kind of place where you could imagine women in roller skates pulling up to car windows to take orders. A small cement patio out front holds four cement benches, but most of the orders are to go.

A man in a pale, mint green guayabera and a paper hat took my order at a sliding window. It was my second burrito of the day, so I ordered the regular size Garbage Burrito in lieu of the XL. The burrito wasn’t as ingredient-laden as the name would imply; pork in red sauce, rice, beans, cheese, lettuce and tomato filled the contours of the tortilla.

At the pickup window they ask if you want hot sauce, a thin, watery red with flecks of black pepper (the correct answer is yes). Orders are served in little paper boxes with a stack of napkins that will all come in handy.

It smelled like a bakery when I unwrapped the deli paper. Within lay a toothsome tortilla, floury and lightly cooked. Pale, creamy refried beans and hearty chunks of salty pork mingled with crunchy lettuce and smooth, dense Mexican rice for a pleasing range of textures. This burrito is elegant, and without pretension, but full of delicious. 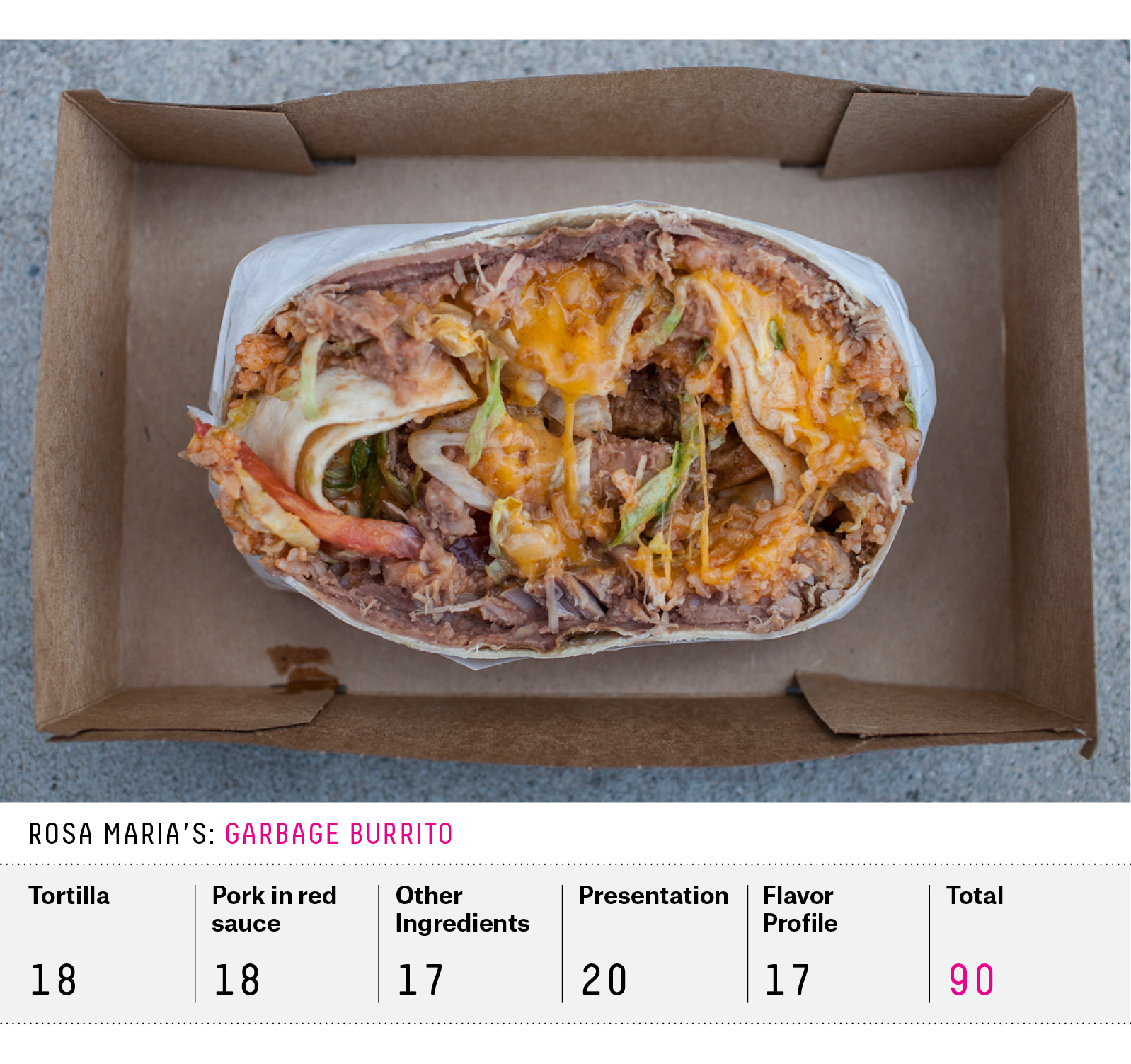 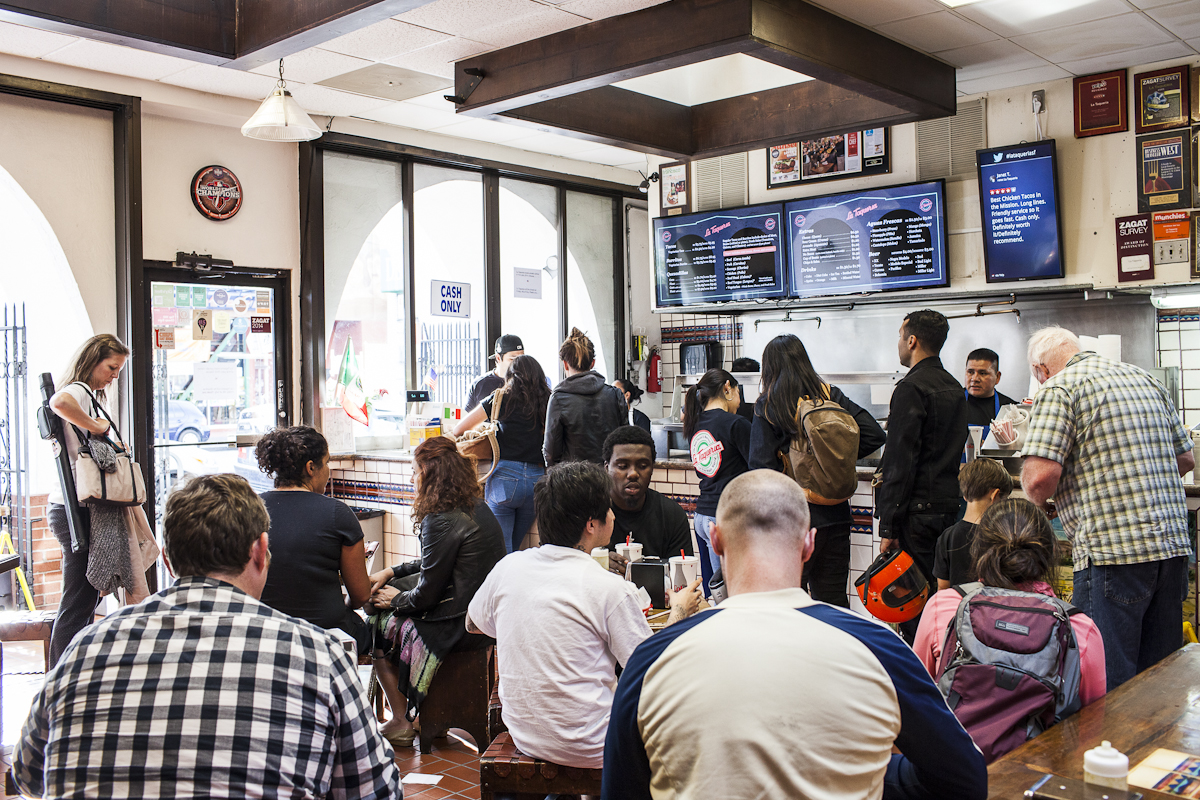 San Francisco’s Mission Street is a major thoroughfare for the district of the same name, home to an abundance of taquerias (as well as pupuseria and restaurants selling other Central American specialties in recent years).

La Taqueria took the Burrito Bracket’s No. 2 seed in California, just behind El Farolito (an internet sensation that took the No. 1 seed with the country’s highest Value Over Replacement Burrito, or VORB, score). Many people take issue with La Taqueria’s prices; starting at $8, this burrito is $1-2 more expensive than others in the area. Several other burritos in the bracket have cost far more, but they aren’t in San Francisco’s Mission District, and therefore aren’t beholden to the same laws in the court of public opinion.

When you order a burrito, the assembly line goes like this: The tortilla is placed on a press to warm it. Once removed, the meat is piled on top, followed by pintos and guacamole, which are smoothed out with a slatted spoon. Sour cream is squirted from a plastic bottle. Tomatoes, cilantro and onion are tossed on top, and the whole thing is rolled up nice and tight, then wrapped in tin foil.

I tried several meats, and they were all exquisite, but the carnitas won my heart with their melt-in-your-mouth qualities and sweet, smoky, rich flavor. This was a burrito of near technical perfection. Pillowy sour cream and chunky guacamole lined the tortilla. The pinto beans were creamy and bursting through their skins, and the shreds of fried pork were tender and dry. The juices that ran throughout, however, were thick with an explosive burst of flavors, beckoning me back with each bite.

I might wish the tortilla was griddled. I might say the meat could be a little juicier. But the blend of liquid and textures in this burrito was so fantastic that I couldn’t dare ask for changes without fearing the consequences. 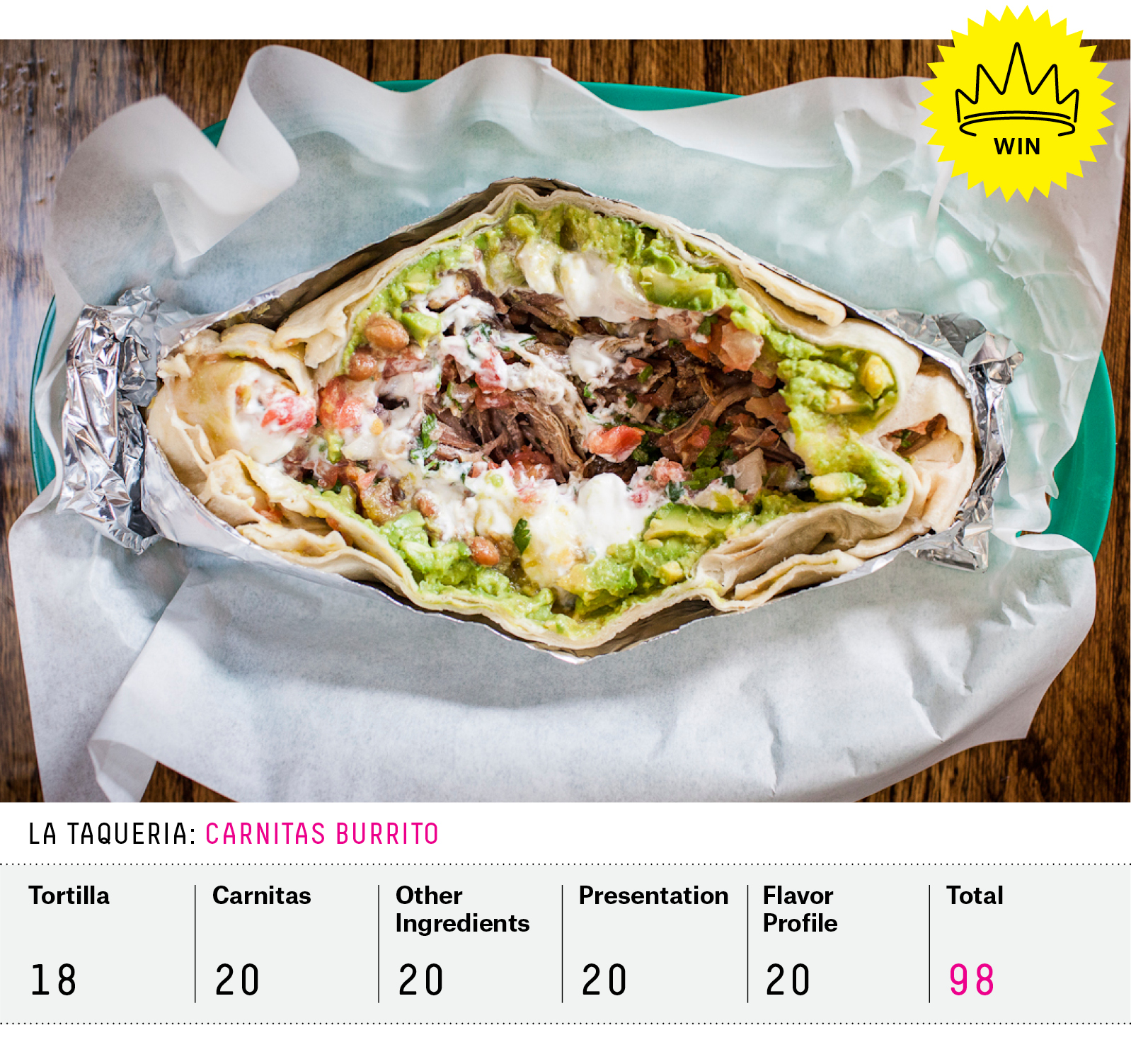 With an abundance of flavor and near technical perfection in execution, La Taqueria takes the win.