On Friday, we posted a piece about FiveThirtyEight’s search for America’s best burrito. It focused on how we chose the 16 restaurants representing California in our Burrito Bracket. 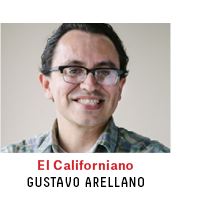 Gustavo Arellano, the Burrito Selection Committee member we call “El Californiano,” scouted America’s greatest burrito state. Arellano is an editor for the OC Weekly, and author of “Taco USA: How Mexican Food Conquered America” and the weekly syndicated column “Ask a Mexican.” He is also a burrito fanatic and advocate.

As public tastes swing toward tacos and more Southern regional Mexican cuisines, he’s defended the burrito. I asked him about this issue.

Anna Maria Barry-Jester: Burritos often get a bad rap because they aren’t considered a traditional Mexican food by many people. You’ve spoken publicly and often about “authenticity,” Mexican food and culture in the United States. What do you say to the burrito naysayers?

Gustavo Arellano: Well, the burrito is Mexican food. It’s eaten in Mexico in Sonora and Ciudad Juarez and Tijuana, and last time I checked, those are all part of the Mexican Republic. I think where authentistas get all angry is that they are flour tortillas. And flour tortillas, to these folks, are not authentic because it was the Spaniards who were too dumb to grow corn in the Southwest and so decided to use flour.

AMBJ: In other parts of Mexico, do they frown upon border foods?

GA: Historically they have, but, of course, this is the culture that’s drinking Mexican Coke and eating Pan Bimbo, which, last I checked, the Aztecs weren’t eating.

AMBJ: In your “Ask a Mexican” column, you often write about racist undertones (and overtones) toward Mexicans living in the U.S. and Mexican-Americans. Mexican food, on the other hand, is pretty universally loved and a staple of American dining. What are your thoughts on why we embrace Mexican culture when there’s so much animosity toward individuals these days?

GA: I actually find that to be a positive development, because historically, the easiest way to malign another culture is via food. The Rolodex of racial insults is filled with foods — we call the British Limeys, French are frogeaters, Mexicans are beaners, Italians are greasers. … The reason that’s done is when you confront a new culture, one of the main immediate differences is the type of food you eat. So by insulting their food and demonizing their food, you’re saying those people are not human, they are subhuman. So what I tell people, first we conquer your stomach, then we conquer your heart, then we conquer your brain. It’s all a process.

AMBJ: You’re clearly in the running for biggest burrito fan on the planet. What is it about burritos that you love so much?

GA: It’s a filling meal. It’s something that historically has been affordable. The level of diversity of burritos is mind-blowing. I love tacos, but a taco for the most part is your corn tortilla, and then only a certain amount of ingredients really pass through it. I mean, they may make it crispy or hard shell or soft shell, but the burrito is far more diverse. The burrito is the ultimate reflection of the multiculturism that is Mexican food, and its conquest of the United States. It’s adaptable to its environment — if you’re up in South Dakota, tater tots are going to be stuffed in. It’s mutable. I think that’s a testament to the power and longevity of Mexican cuisine, not just in Mexico or the United States, but increasingly the world.