Seattle Seahawks quarterback Russell Wilson is no stranger to the big moment. Last season, he tied for the NFL lead in both fourth-quarter comebacks and game-winning drives, adding to a career resume that already has him zooming up into Hall of Fame territory after just eight-plus pro seasons. But this season, the Seahawks are preemptively unleashing Wilson in a way that might not require him to be quite so heroic at the ends of games for Seattle to have a chance at winning.

The battle cry for Seahawks fans has long been to “Let Russ Cook” — i.e., to expand the passing game and lean on Wilson’s individual brilliance more frequently. (Otherwise, what is the point of having an all-time great quarterback?) But even more specifically, it’s about calling on Wilson earlier in the game. Seattle coach Pete Carroll has been criticized in the past for running the ball too often;1 he’s even said before that he loves the run because “it’s the best way to not screw it up.” So it’s usually been an uphill battle getting Carroll to sign off on passing throughout the Wilson era: Since 2012 (Wilson’s first season as starter), Seattle has called designed runs on a league-high 42.7 percent of its offensive plays, according to ESPN’s Stats & Information Group.

Of course, Seattle has also been one of the best teams in the NFL over that span, and it’s not uncommon for even forward-thinking teams to let their rushing be dictated by the game’s situation, since one of rushing’s best roles is to chew clock when you already have the lead. But the Seahawks are also the second-most run-happy team in the first quarter of games since 2012 (trailing only the Jets), running 46.9 percent of the time.

Rather than Letting Russ Cook all game, the Seahawks have tended to try to establish the run early … and if that didn’t work, then they asked Wilson to save the day. Sometimes, that tactic triumphed — witness all of those comebacks in 2019. But it’s a tough way to build sustained success.

Wilson told reporters in August that he would be happy to pass more early in games “rather than us having to be in the fourth quarter to be able to make stuff happen.”

The early signs are encouraging for those who want to see more Cooking With Russ this year. In the first two games of the 2020 season, Seattle has run the ball only 36.8 percent of the time overall, including just 33.3 percent in the first quarter (the fifth-lowest frequency in the league). That’s by far the lowest rate of first-quarter run plays called by Seattle in any season of the Wilson era: 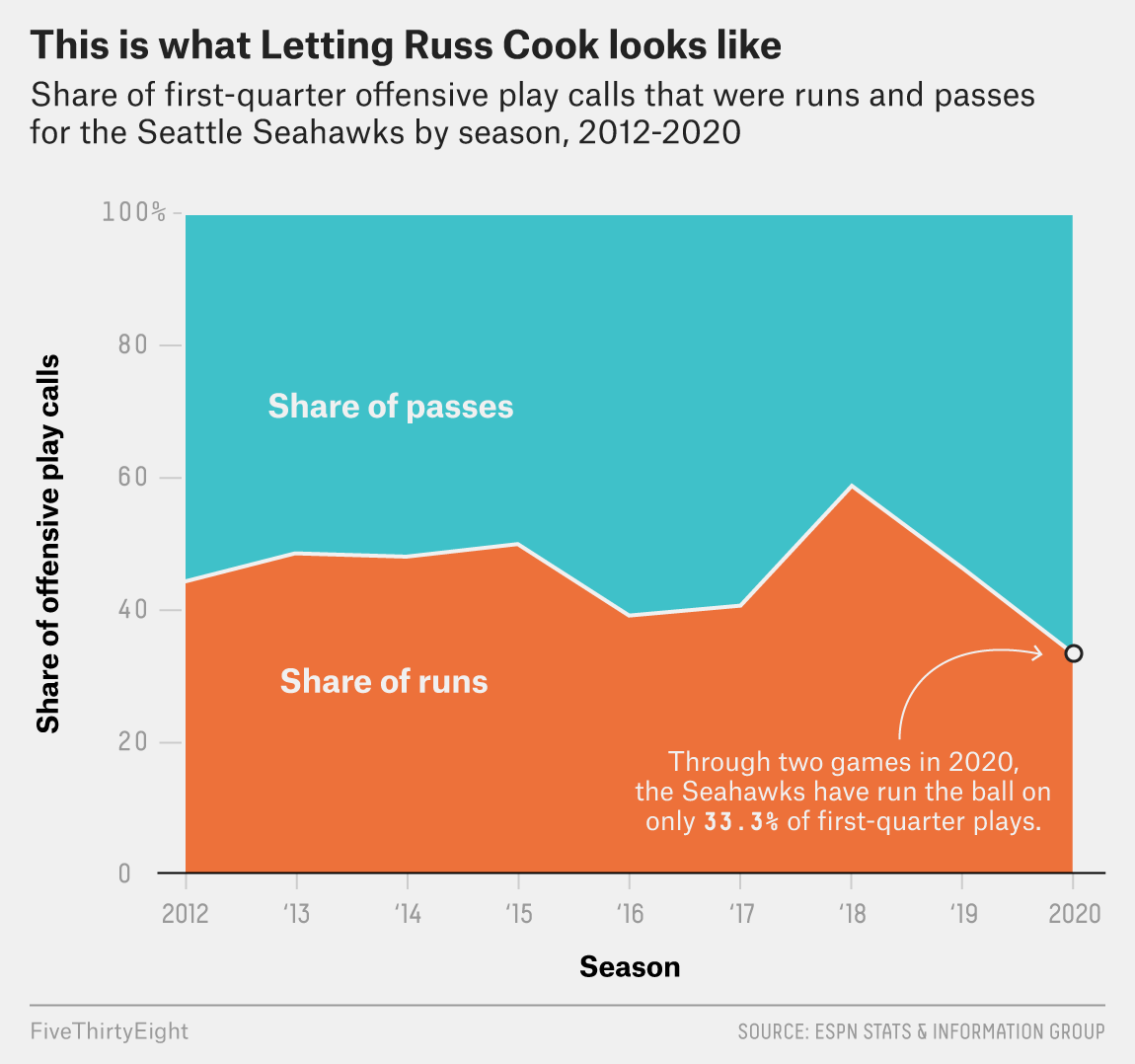 It’s helped that Wilson has a 98.6 Total Quarterback Rating (QBR) in the first quarters of games this season, which is easily the best of any passer so far this season. The strategy also hasn’t gone off completely without a hitch — Wilson has a 36.9 QBR in second quarters, causing him to have to play exceptionally well (96.9 QBR) in the third quarter to stake Seattle to its average lead of 13.5 points per game headed into the fourth. But the important takeaway is that Wilson has the Seahawks’ destiny in his hands earlier in games than in the past.

And individually, the results speak for themselves. Wilson is completing passes at a rate 13.9 percentage points higher than we would expect based on the characteristics of his throws — edging out the reigning MVP, Baltimore’s Lamar Jackson (+12.2), for the top spot in the league. And according to our QB Elo ratings, Wilson has been the best quarterback in the NFL so far this season on a per-start basis:

Although the Seahawks needed their defense to deny Cam Newton in order to hold off the New England Patriots and secure a victory on Sunday night, Seattle had the lead to defend because of their offense. According to ESPN’s expected points added (EPA), the Seahawks’ passing attack was worth 12.3 EPA (eighth-most of any team in Week 2) against a defense that had easily been the best in football against the pass last season. If we adjust for strength of schedule using last year’s EPA numbers to guide our expectations, Seattle has had the second-best overall offense of any team so far in 2020 — and it ranks No. 1 specifically through the air.

That’s a major reason that our predictions think the Seahawks are now NFC West favorites, and we give them a 7 percent chance of winning the Super Bowl — fourth-best in the league. All it took was giving an all-time great QB more chances to put his stamp on games. (What a concept.)

Looking ahead: Week 3’s top game is clear — Chiefs at Ravens on Monday Night Football, Elo’s No. 1 versus No. 2. Baltimore has looked as formidable as ever in its first couple of games, showcasing a dominant defense (No. 1 in EPA) to complement Jackson, our top-ranked QB. Kansas City needed a late comeback against the Chargers to join the Ravens at 2-0, but that’s kind of Patrick Mahomes’s thing. Neither team’s offense has been operating at quite as high a level as last season, when Baltimore and K.C. finished 1-2 in EPA, but the past two NFL MVPs are probably just getting warmed up. We give the Ravens a 54 percent chance of winning at home in a rematch of last year’s 33-28 Chiefs win at Arrowhead. Elo’s spread: Baltimore -1