The wars in Iraq and Afghanistan are mostly over. But many recent veterans now face a new challenge: getting a civilian job.

The unemployment rate for veterans — in this case, defined as anyone who served on active duty in the armed forces — was 4.5 percent in October, according to Bureau of Labor Statistics data released Friday. That was better than for the population as a whole. But for recent veterans — those who have served since Sept. 11, 2001 — the story was significantly different: Their unemployment rate was 7.2 percent in October. That’s down from 10 percent a year ago, but it’s still significantly higher than the 5.5 percent rate for the overall U.S. population. (Note: The government doesn’t provide seasonally adjusted data on veterans, so I’m comparing their unemployment rate to the equivalent, unadjusted rate for the population. The better-known seasonally adjusted unemployment rate is 5.8 percent.) 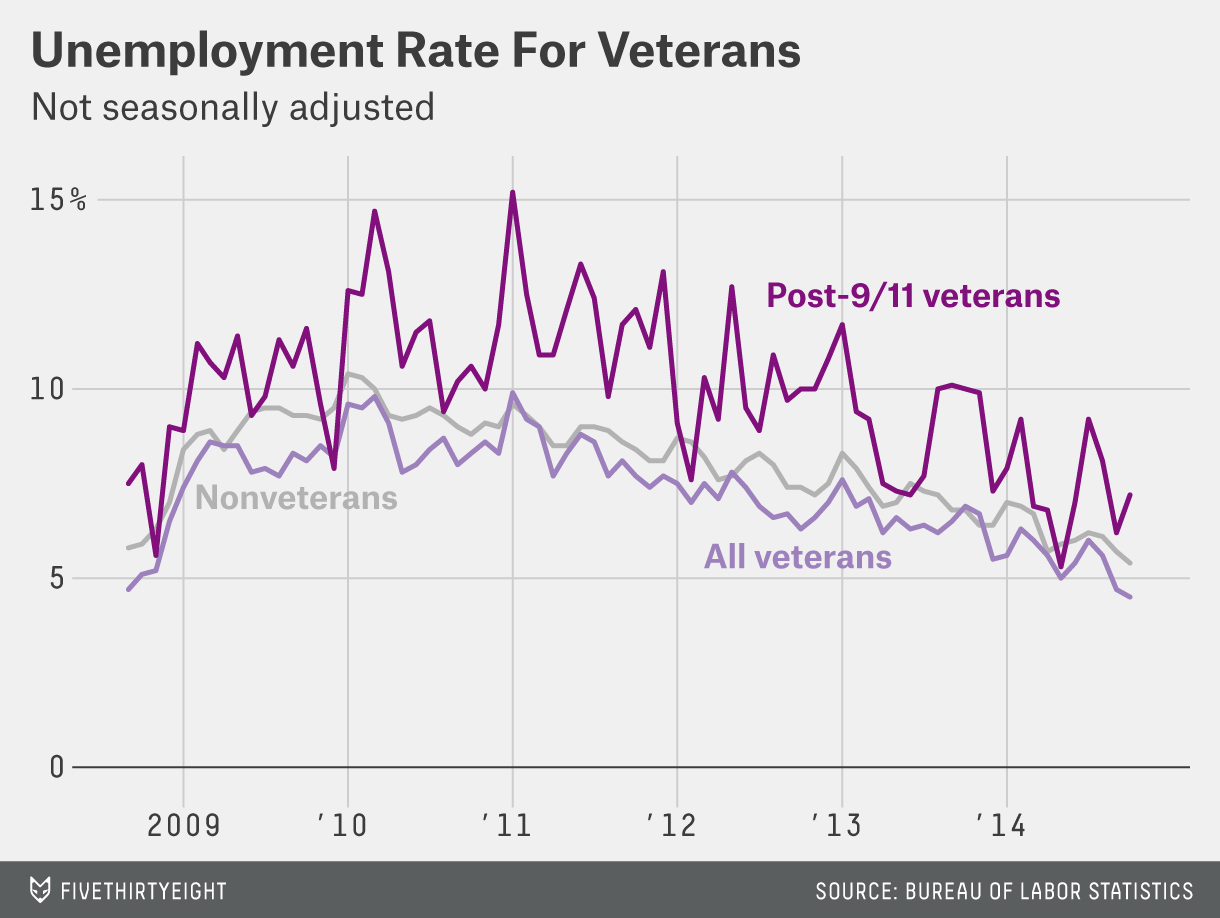 The higher unemployment rate among recent veterans is in part a product of demographics. As a group they are younger and less educated than the population as a whole — characteristics that are correlated with higher joblessness.

But even controlling for those factors, and others such as race and sex, the unemployment rate among recent veterans is higher than expected. Over the past year, their unemployment rate has averaged 8 percent — a percentage point and a half higher than it should be based on their demographics and education alone. (See the methodology note at the end if you’re interested in more details on this calculation.)

The unemployment rate is an imperfect measure; it only counts people who are actively looking for work. But other measures tell pretty much the same story. Recent veterans are less likely to be employed than their peers who didn’t serve. And those who are jobless are more likely to have been out of work for more than six months, after which it becomes much more difficult to find a job.

The high unemployment rate among veterans might seem surprising given the military’s emphasis on discipline, leadership and problem solving, all skills companies say they value in employees. And indeed, many major civilian employers have active programs aimed at hiring vets. But many veterans report struggling to translate their military experience for civilian recruiters. A separate report from the Census Bureau on Monday showed that many veterans end up in jobs closely related to their military service, such as law enforcement, private security and maintenance work.

Methodology note: All these calculations are based on Current Population Survey microdata for October 2013 through September 2014. (October 2014 data hasn’t yet been released.) The CPS classifies veterans based on when they served, not where, so everyone who served since September 2001 is considered a veteran of the Iraq/Afghanistan era, regardless of where they served.

My estimate of the expected unemployment rate is based on a logistic regression using age, sex, race and education as predictor variables. (Ages are in 10-year buckets, apart from ages 18 to 24 and 65 and older. For education, I use a binary college/non-college dummy variable. For race, I use a binary dummy for non-Hispanic white, although I also tested the model using a more detailed race variable.) The model is calibrated using the non-recent-veteran population.