In our overview of the state-by-state electoral projections issued by other media outlets, we asked FiveThirtyEight readers to weigh in using The Times’s build-your-own electoral map interactive.

Twenty-seven readers obliged, and over all they see the race as most others do, including the FiveThirtyEight model: very close with a faint advantage to President Obama. Twenty-three of the 27 maps submitted had Mr. Obama winning re-election, but 18 of those 23 had him winning fewer than 300 electoral votes (it takes 270 to win). And more than half of the respondents predicted that the final Electoral College margin will be within 40 votes, whether Mr. Obama or Mr. Romney wins. 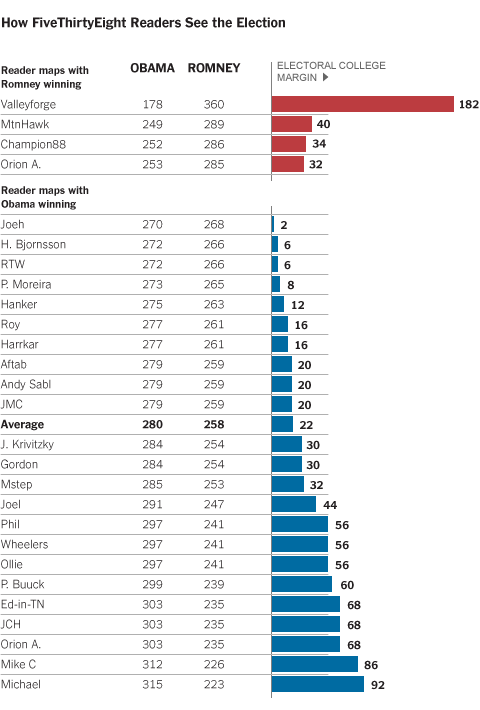 There were a few readers who expect the election to break wide open. Valleyforge, for example, predicted that Mr. Romney would win 360 electoral votes, one more vote than Mr. Obama would earn if he won all the states he did in 2008.

Valleyforge has Mr. Romney winning Oregon, New Mexico, Minnesota, Michigan and every tossup state. That might seem unlikely, but Valleyforge says it shouldn’t:

It’s easy to forget that Republicans haven’t won a presidential election by more than 2.5 percent since 1988, and our view of the Electoral College is clouded by an assumption that Republicans aren’t competitive in some regions. But from 1980 to 1988 the Republican won 489, 523 and 421 electoral votes.

And as much as Valleyforge’s map — if it came to fruition — would demoralize Democrats, he sees even darker times ahead for the left: “In 2016, add NJ, IL (now free to follow its Midwestern neighbors), WA, ME, DE and CT. 418 Romney, 120 for Cuomo, doing his best to channel Dukakis,” he wrote.

Looking at readers’ predictions state-by-state, there was a near consensus on the status of most states. Only a few states seemed to divide readers in roughly even groups. 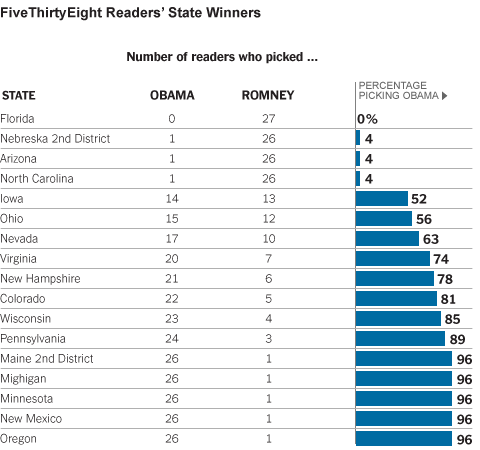 Not a single reader expects Mr. Obama to carry Florida, even on the maps that have him winning more than 300 electoral votes. The current FiveThirtyEight projection is indeed bearish on Mr. Obama’s odds in the Sunshine State, but it still gives him a 35 percent chance to win there. Only one reader gave Mr. Obama the 15 electoral votes from North Carolina, where FiveThirtyEight gives the president a 26 percent chance of winning.

Iowa and Ohio were the two states that seemed to cause the most disagreement. Indeed, Ohio is as close to too-close-to-call as any state in FiveThirtyEight’s projections, which give Mr. Obama a 51 percent chance to win there.

But of the four maps predicting a Romney victory, all four have Mr. Romney winning Ohio, suggesting readers see it as a virtual necessity for him. According to the FiveThirtyEight model, there is a 20.4 percent chance that Ohio provides the winning electoral vote, placing it second to Virginia among FiveThirtyEight’s top tipping point states.

MGD, a reader in New York, agreed: “If Romney takes Ohio, he has a good chance. If Obama takes Ohio, it’s 99 percent game over for Romney.”