Although Major League Baseball’s audience is old enough to give golf a run for its erectile-dysfunction ad dollars, its player pool is skewing younger each year. Research suggests that players are peaking — and declining — more quickly, placing them in their primes ever earlier. It’s no coincidence that young stars such as Bryce Harper and Carlos Correa seem emboldened this spring, openly advocating a more demonstrative style of play. This is their game; modern MLB is no sport for old men.

As the game has gotten younger, it has also picked up the pace — and not just between pitches. The average (four-seam) fastball has sped up by about two miles per hour over the last decade, incinerating countless chyrons along the way. In the eight full seasons for which we have complete PITCHf/x data, the proportion of MLB fastballs topping 93 mph has increased by almost 50 percent, with the percentage breaking 95 mph nearly doubling and the share above 97 mph nearly quadrupling. 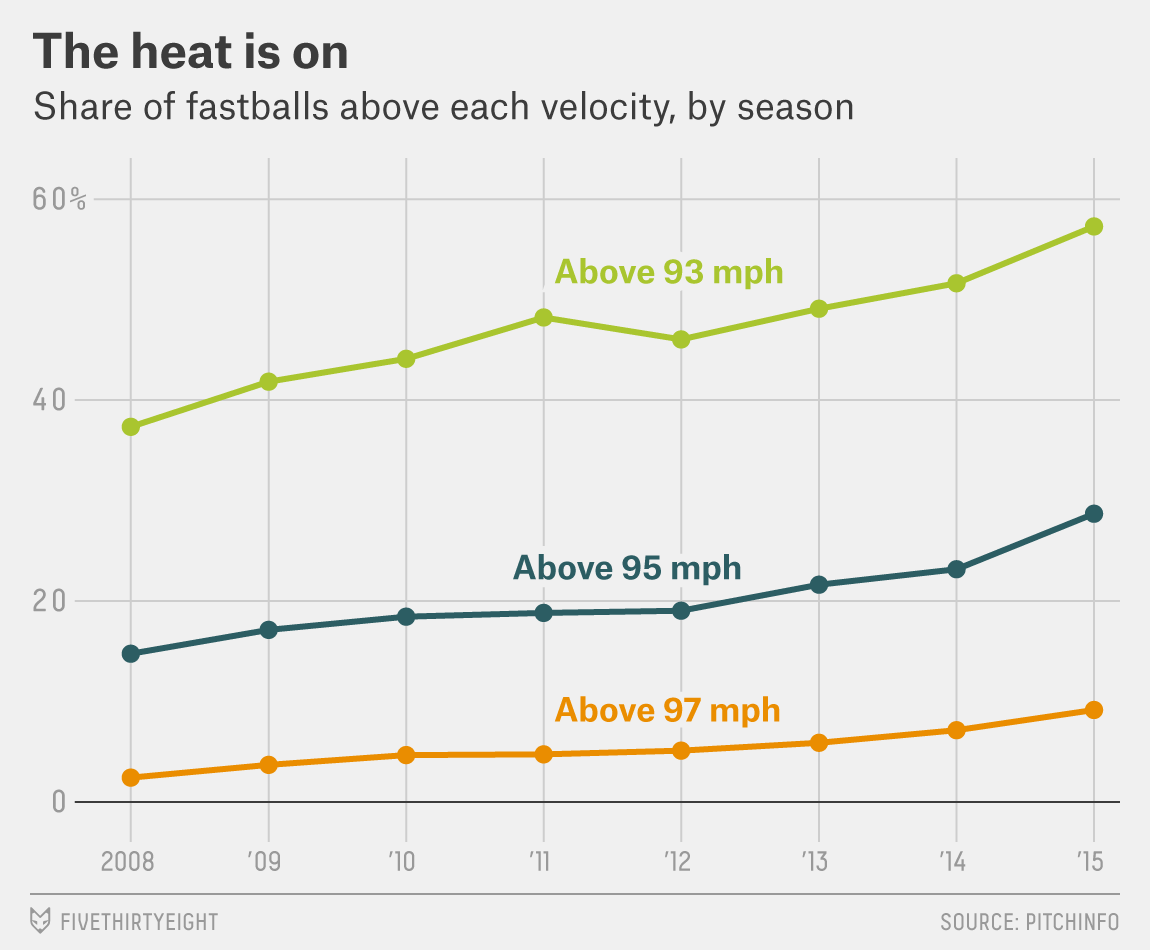 In a recent edition of his newsletter, Sports Illustrated contributor and Baseball Prospectus co-founder Joe Sheehan drew a connection between these two trends, speculating that faster pitches are forcing older hitters into early retirement.

“Which players are best equipped to see and hit velocity?” Sheehan asked. “The youngest ones with the sharpest eyes and quickest reflexes. It’s not the hitter pool that is changing, whether through substance usage or otherwise. It’s that the skills of pitchers have changed in a way that hurts older players more than younger ones.”

Sheehan’s proposal sounds plausible. Reaction time is known to decrease from a peak at approximately age 24. Faster pitches leave hitters less time to react. It seems intuitive, then, that older hitters would have a tougher time adjusting to baseball’s current hard-throwing conditions.

Sheehan did, however, acknowledge that this is only a theory. “To prove it, what we need is a look at whether young players do better at hitting high-velocity pitches than older ones do,” he wrote. “On servers somewhere there’s enough information to see what players of every age do against pitches of every velocity. That’s where the answer lies.”

That’s where we come in. We’ve accessed that server, but it looks as if the data — unlike the latest radar-gun readings — is saying “not so fast.”

The chart below displays the average offensive performance — as measured by run expectancy added per pitch — against four-seam fastballs1 above and below 93 mph, broken down by batter age: 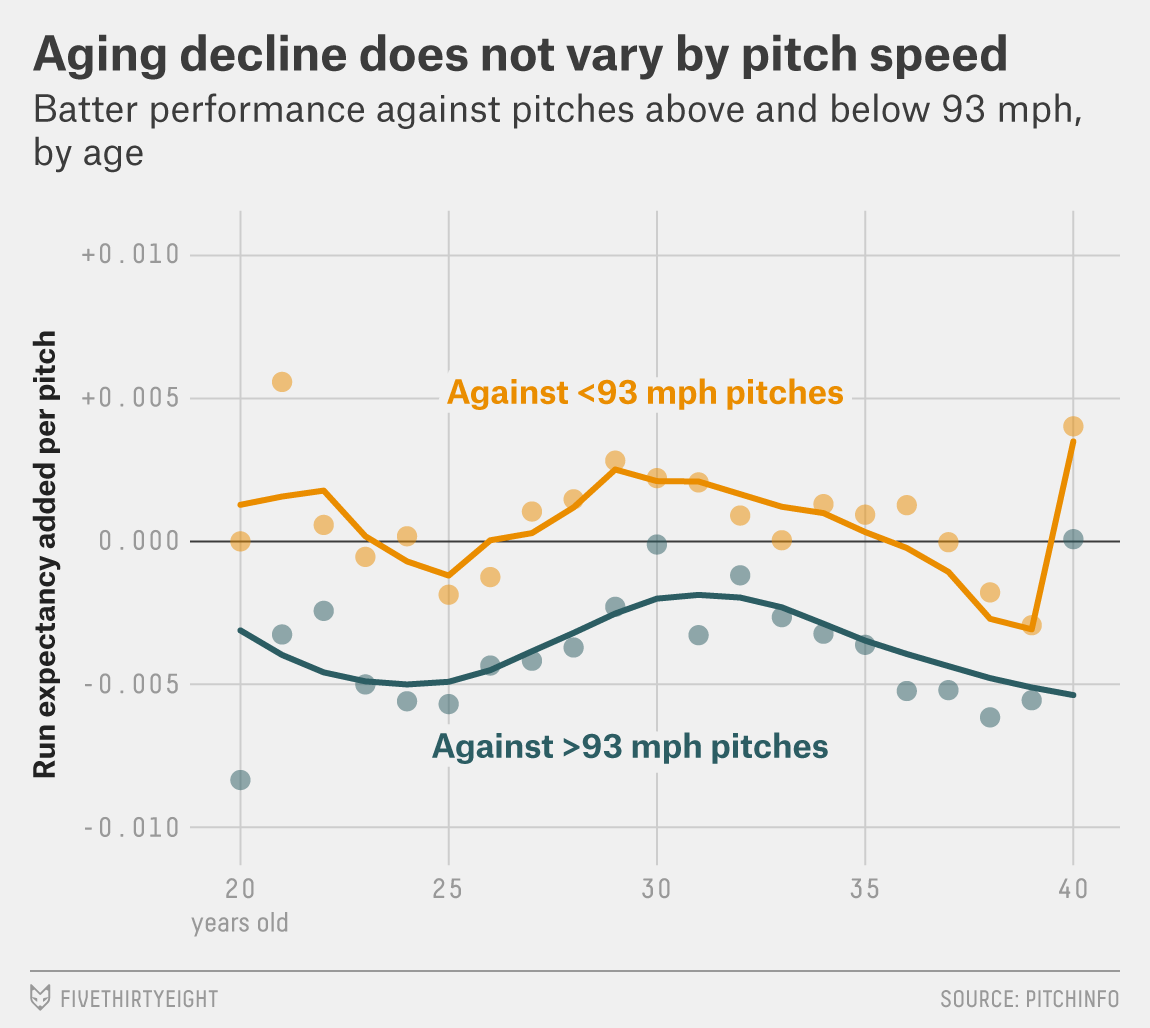 The green “against high velocity” line is consistently lower than its orange counterpart, which tells us that faster pitches are generally harder to hit, regardless of the batter’s age. (No surprise there.) But the gap between the two lines stays constant as a batter gets older, suggesting that age doesn’t necessarily make it harder to catch up to fast pitches. If old hitters are at a greater disadvantage against gas, it’s not showing up here.

Of course, there are other ways to test Sheehan’s hypothesis. We can also create an aging curve using the delta method, which measures the typical change in a player’s performance over time by grouping players of each age and isolating their performances in consecutive seasons. If rising pitch speeds are responsible for hitters’ declining earlier, we would expect to see the performance gap against faster and slower heaters grow as players get further from their physical peaks. (In this case, a negative number on the y-axis indicates that players got worse at hitting harder fastballs, relative to softer fastballs.) 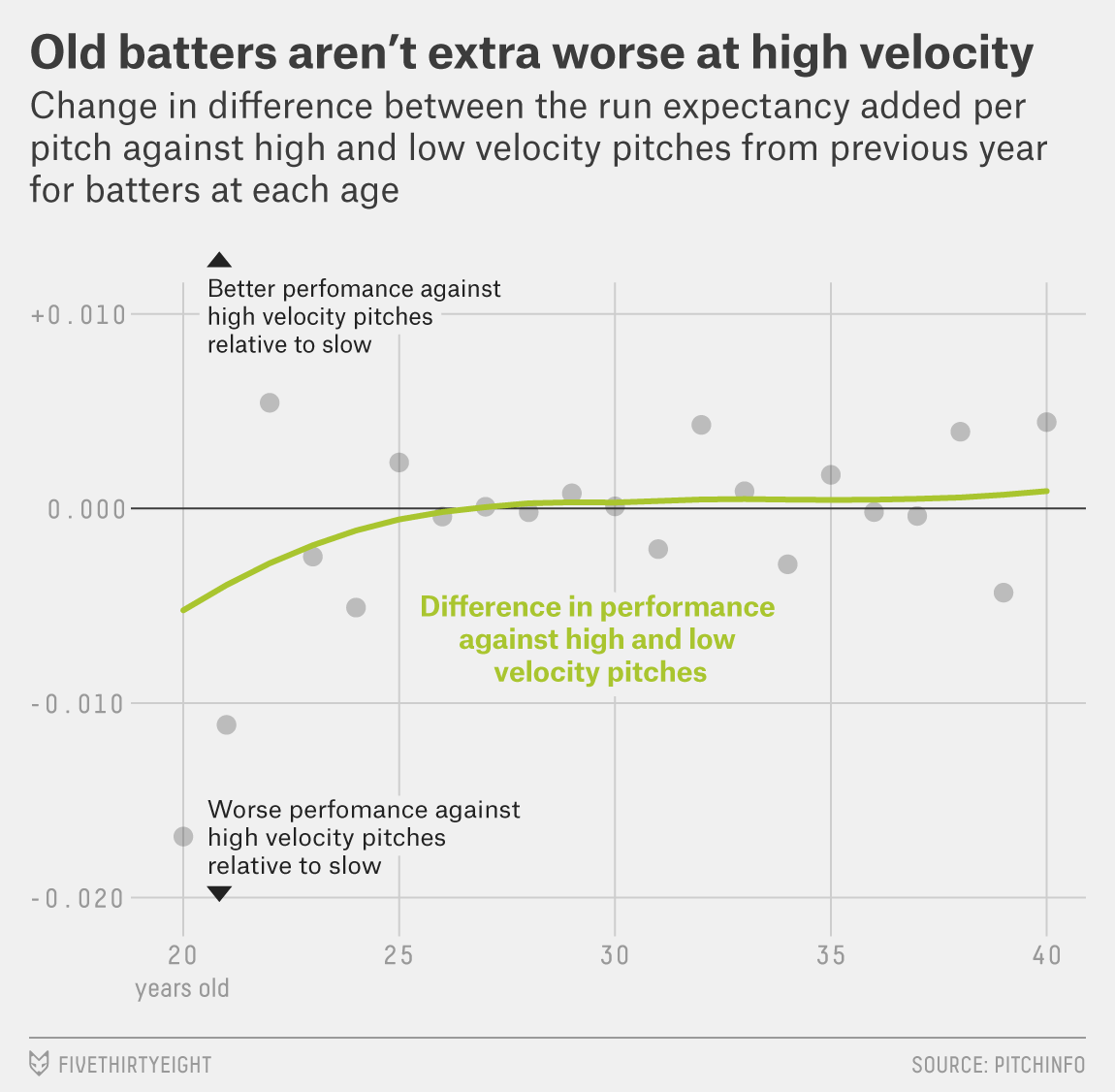 Instead of a widening gap, we again see essentially no change as a player passes out of his prime. Although we know that, on the whole, hitters get worse as they age, their declines don’t seem to be steeper against elite
heat.2

We can even try to corroborate the theory in indirect ways. If aging batters were “cheating” against good fastballs, for instance, starting their swings early to mask delayed reactions, we would expect them to be more vulnerable to pitchers who are adept at changing speeds — yet hitters don’t decline any more quickly against pitchers with especially large speed separations between their fastballs and nonfastballs. Similarly, if veterans couldn’t catch up to good fastballs, we would expect pitchers to exploit that weakness by throwing more of them to older hitters than younger ones — but batters barely experience an uptick in the percentage of 93+ mph pitches they see over time. 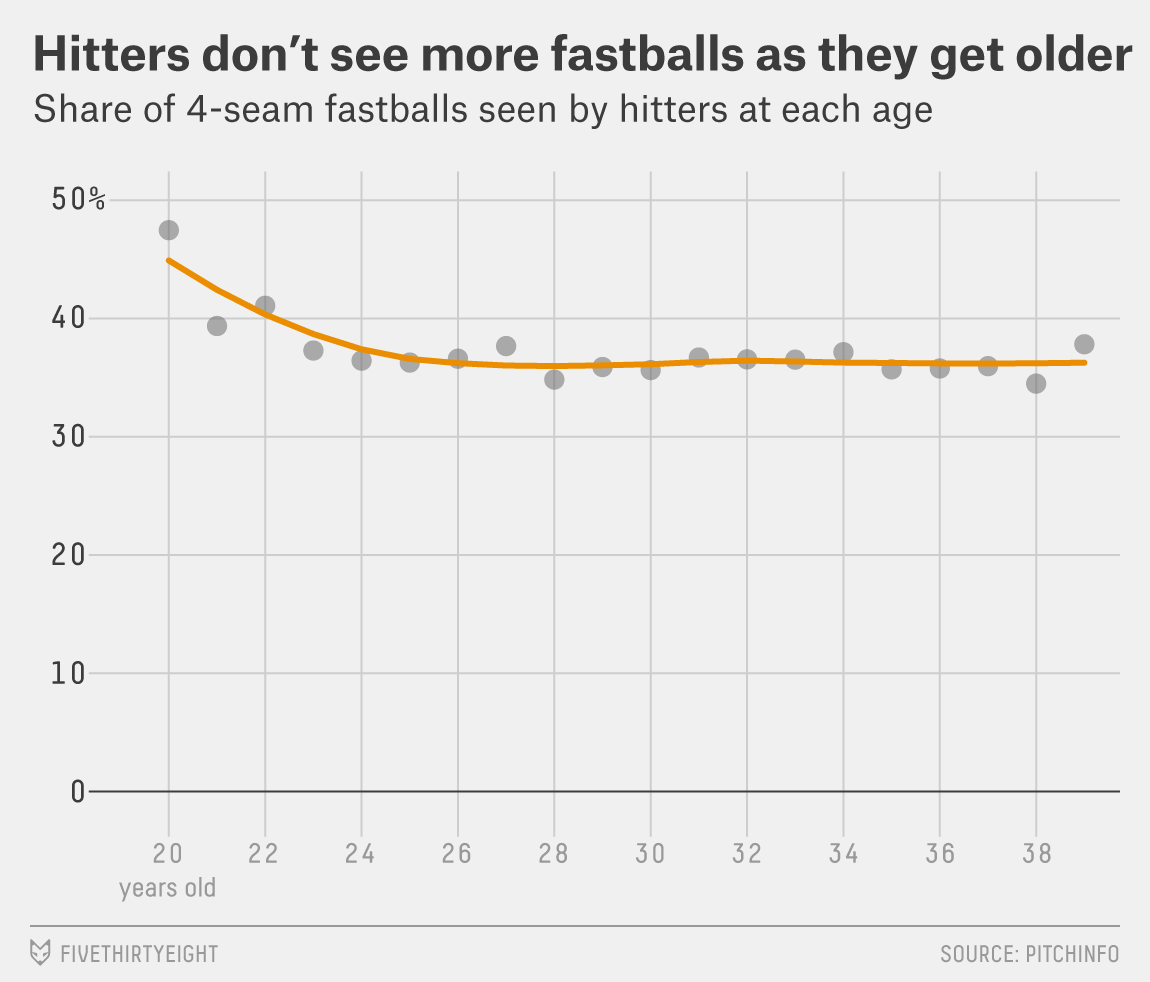 So why wouldn’t older hitters be burned most severely as pitchers turn up the temperature? Although slowing response speed probably contributes to age-related hitting declines, it likely affects performance against all pitches. (It’s not as if any major league offerings were easy to hit.) In addition, the same study that pegged peak response time at 24 noted that older competitors can compensate for a loss in response speed with strategies born of experience. For instance, older hitters could be better at anticipating fastballs, which would help them offset slowing bat speed. And while decrepitude eventually comes for all players, the ability to catch up to good fastballs may not be the first (or the worst) thing to go. Declines in durability, stamina and muscle mass may combine to claim careers before hard-throwing pitchers start to take a higher toll.

Admittedly, we may also be missing something. It’s almost impossible to eliminate selection bias from aging studies in sports, because players who decline quickly disappear from the sample. In this case, though, we believe that bias would be slight, in part because we’re focusing not on overall performance against fastballs — which does a lot to determine whether a hitter’s career continues — but on the difference in performance against fastballs of certain speeds.

It’s indisputable that hitters are aging less gracefully than they did two decades ago, so if we can’t blame better fastballs, we need another culprit. It could be that baseball’s anti-PED policies have (mostly) removed an unnatural advantage that was propping up older players, although that presumes the unprovable — that veterans were disproportionately using (and benefiting from) steroids and/or amphetamines before the bans. It could be that teams have gotten smarter about evaluating defense, which tends to decline quickly, or that year-round amateur play and improvements in professional player development have better prepared young players to displace their predecessors. (Or even that skyrocketing salaries have made it more common for players — cough, Adam LaRoche — to walk away before they’re forced out.)

Or maybe our perspective is skewed by one anomalous era. Although the current percentage of wins above replacement4 produced by hitters over 30 looks extremely low compared with its 1998 peak, it’s roughly in line with the same proportion from the 1960s, ’70s and ’80s, when the typical fastball was far slower: 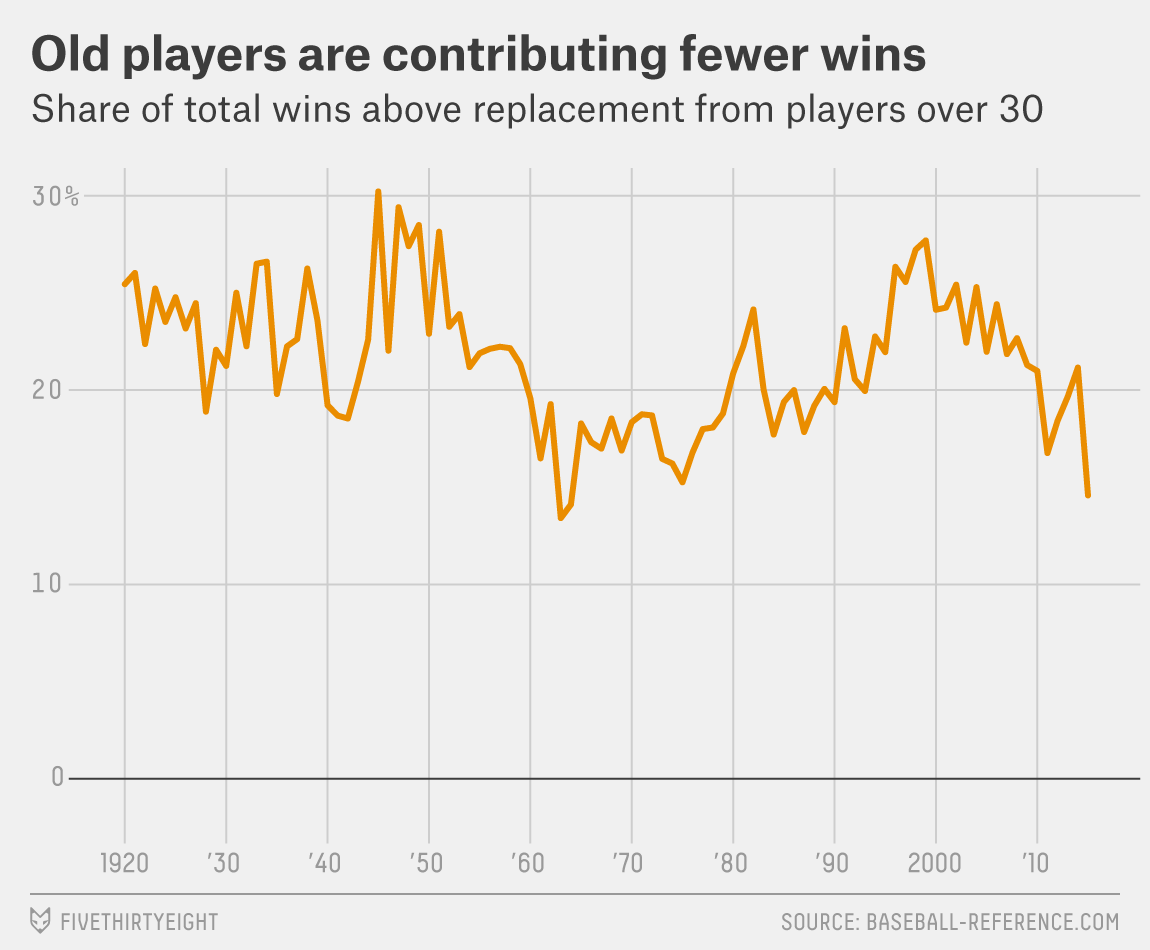 So, sorry, Joe: for better or worse, access to servers can’t confirm this appealing hypothesis. Some sports mysteries still resist the neat narrative, no matter how many stats we have on our side.

Ben Lindbergh is a former staff writer at FiveThirtyEight. @benlindbergh