When Derek Jeter retired last year, the pundits puzzled over who would be the next “Face of Baseball.” Jeter was the guy on the Wheaties box, after all. And more broadly, Jeter’s retirement seemed to close one era of baseball and open another. Without an elder statesman, the game belonged to the kids. But would there be enough excellent, prodigious young players to replace Jeter’s cohort? We already have an answer: The kids are damn good, and they’re part of one of the most significant youth movements in baseball in the past 25 years.

Baseball’s excellence is supremely concentrated in its young players at the moment. To get a sense for the balance of power in MLB, I calculated the average age of all position players in the league while weighting each player’s age by how good they were in a given year (using wins above replacement1). For example, the age of an MVP-type player counts for roughly eight2 times as much as a below-average scrub because he’s eight times better according to WAR. So, if the MVP is young, he’ll pull the weighted average down toward him. By weighting the ages in this way, we get a sense for where in MLB the production comes from — specifically, whether it arises from the grizzled veterans or the youngsters. 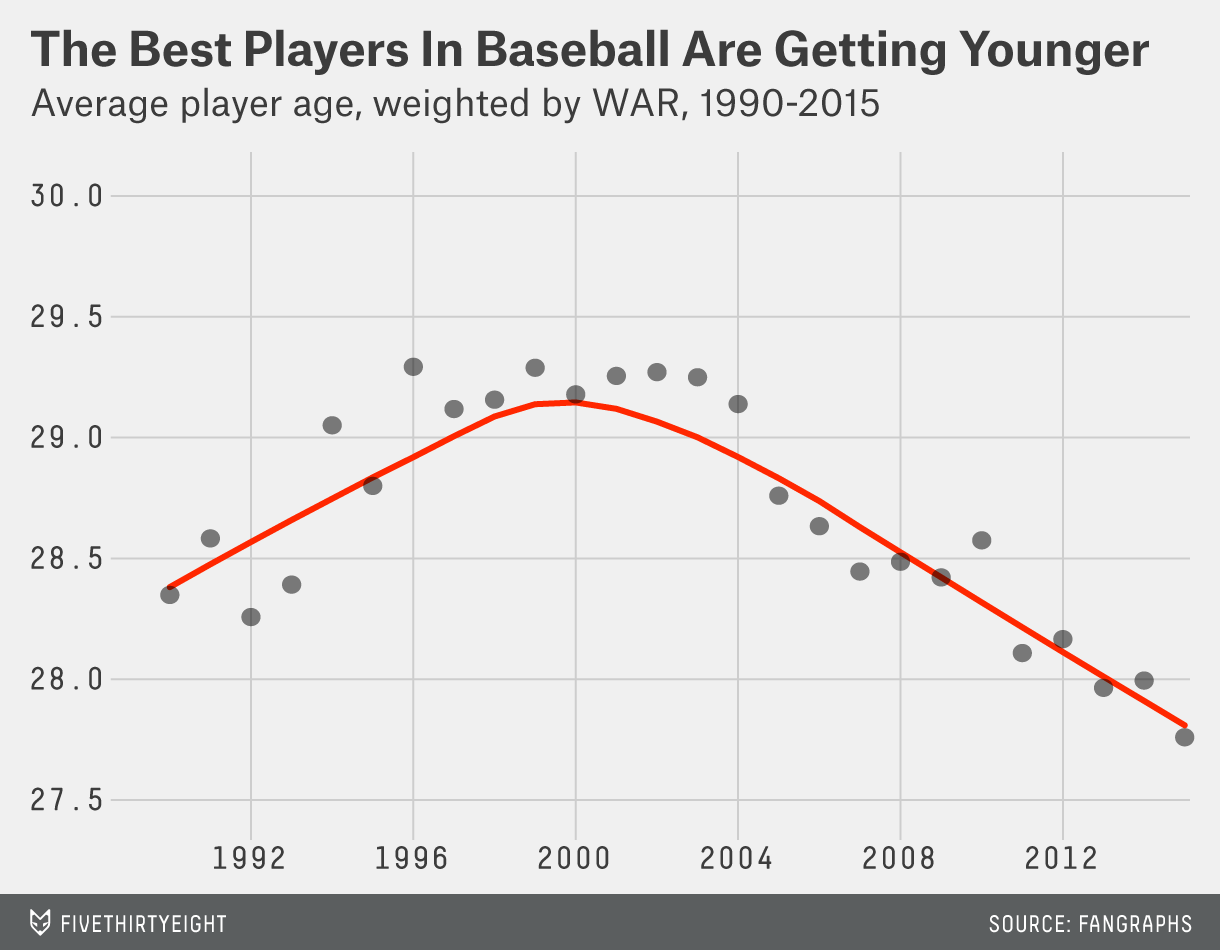 The youngsters are winning.

Since the early 2000s, the MLB’s weighted age has consistently fallen, hitting its low point (of 27.76) this year. This graph tells us that in recent years, more of the positive value in the league has been coming from younger players.

The twin faces of the youth movement are undoubtedly Bryce Harper and Mike Trout, still only 22 and 23, respectively. Despite the best efforts of opposing pitchers, Trout is performing at his now-routine MVP level. Harper seems to have finally discovered consistent success with an overwhelming power stroke. But Harper and Trout have been joined by a generation of super-prospects who are outperforming even the loftiest expectations. Kris Bryant is the most obvious, but others include Joc Pederson, Carlos Correa, Mookie Betts and Addison Russell.

There are several ways that baseball’s production could be getting younger, but it turns out that there are two straightforward explanations. One is that the oldest players have become less productive. The second is that the youngest players are on pace to create a tremendous amount of value.

Let’s start with the veterans. Players ages 333 and up have produced only 24 WAR so far this year, on pace for the second-lowest total of the past 25 years. Over a full year, that prorates to 54.8 WAR, which is less than half the total achieved by the equivalent group of players around the turn of the millennium.

It’s not clear what is driving older position players down. One possibility is that new pace-of-play rules are making it harder for older hitters to make use of their experience. On the other hand, older position players seem to be getting worse not only at hitting, but also with the glove — and even on the base paths.

There could be a connection between the fluctuating pattern of production by older players and the steroid era. Certainly, some of the confirmed steroid users managed to be productive well into their 30s, suggesting that steroids might confer their beneficial effects especially upon older hitters. But in the absence of data on who used what steroids when and how, it’s difficult to pursue this idea beyond a hypothesis. Regardless of the cause, it looks as though the current trend of age and production is more of a return to the norm of the early 1990s than a novelty.

At the same time, we are witnessing a historic youth movement. Just as the very old players have gotten worse, the youngest have become much better. Players 24 and younger4 have produced 48.7 WAR this year, which puts them on pace for about 110 WAR in a full year. If it holds, that would be the most WAR put up by this age group since 2007.

That year saw a generation of future stars cement their place in the league. David Wright, at that time 24, had his best season, an MVP-caliber effort. Wright was joined by a host of talent, from Troy Tulowitzki to Jose Reyes to Miguel Cabrera. In total, 13 young hitters put up WAR values greater than 4, in the neighborhood of All-Star-level performance. Many of those players, and even some of the tier below them, have gone on to become superstars.

Young players have traditionally relied upon their defense to build their value, and this year is no exception. The 24 and under group typically performs anywhere from 100 to 500 runs below average on offense but makes up for it to some extent with 100 to 200 runs from their defense.5 Less than halfway through this season’s games, young position players have been worth 93 runs defensively. Prorated to a full season, this would be the best defensive performance for that age group since 2001, when the overall value of the youngsters was near its low point.

Except today’s kids can do something those 2001 ones couldn’t: rake. With an average mark of 94.6, young hitters are putting up the best Weighted Runs Created+ (wRC+) since that marvelous 2007 class (which was at 99.2). The average wRC+ is set at 100, so the young players are adding decent hitting to their superlative defense. Much of the hitting stems from a power surge: The young hitters are racking up a slugging percentage of .400, slightly better than the league average of .397.6

The young players are even providing value with their baserunning. Reds speedster Billy Hamilton, 24, leads the way, but the group is already up to 27.1 runs of baserunning value (Hamilton alone is responsible for nearly a third of this number). If it holds over a full season, that will be the best mark since 1990.

Some of these statistics will not hold up over the length of a full season because of injuries or regression to the mean, of course. And many of the averages will be distorted by September call-ups. But two-thirds of the total WAR in this year’s young group comes from the 10 best players, all of whom are firmly ensconced in starting roles.

A wave of young talent has arrived, just as the old veterans are fading into irrelevancy. Whether your preference is for Nolan Arenado’s slick glove work, Harper’s absurd power or Bryant’s eyes, we are witnessing the rise of a generation of future superstars.