Even the messiah can strike out three times on his first day in the majors. Last Friday, Kris Bryant, the Cubs’ anointed savior, was called up from the minors after weeks of debate about whether he should’ve just started the season in the majors. There is an aura of myth to Bryant’s arrival, as though the stars have aligned to offer the Cubs a chance to fulfill a prophecy. Yet Bryant is still an untested prospect, and, as Cubs fans know too well, even the best prospects can fail to live up to expectations.

But Bryant really is special — he’s the rare prospect that has both scouts and stats in complete agreement. Because of the unique intersection of scouting know-how and minor league data, Bryant is likely to match the hype.

Let’s start with the stats. In this case, all we have to go by are projection systems, which take the minor league data of previous prospects and compare it with their MLB results to predict what up-and-coming players will accomplish. That’s no easy task — the minor league data is sparse, and performance is confounded by the effects of the league and the age differences between players.

In Bryant’s case, however, the projections are so high that there is little room for doubt. No matter whether you look at FanGraphs’ Steamer (.260/.333/.498) or Baseball Prospectus’s PECOTA (.265/.356/.525), all the algorithms are in agreement in their preseason projections: Bryant is going to be a fantastic hitter.1 ESPN’s Dan Szymborski, who runs another algorithm called ZiPS, tweeted that Bryant’s is the best prediction he’s ever given to a prospect.

There’s no mystery as to how Bryant arrived at these projections — the guy hit between 60 percent and 120 percent better than average while in the minors, depending on the level. Still, Bryant’s projection is so extreme that at one point, the developers who run the projection systems became worried. In a mid-winter Twitter consultation, baseball projection system developers compared Bryant’s projections to make sure that they weren’t out of line. There was consensus: All of their independently developed algorithms were giving Bryant one of the top hitting lines in the majors.

Even so, not all prospects hit as well as their projections say they should. The computers, operating solely on minor league performance, can fail to notice fatal flaws in a hitter’s swing, flaws that can be exploited ruthlessly at the major league level. That’s partly why projection systems aren’t as good as scouts at predicting how prospects will perform in the major leagues. So, despite their depiction in “Moneyball,” scouts are an integral part of evaluating baseball players, and that goes double for prospects.

Scouts look at the shape of a hitter’s swing, if he can generate power, and how easily he adapts to a pitcher’s shifting tactics. Bryant’s ludicrous numbers in the minors were no guarantee that the scouts would love the tools he used to achieve those numbers.

The scouts are every bit as high on Bryant as the projections. He was ranked the No. 1 prospect in baseball for 2015 by venerable scouting organization Baseball America. FanGraphs also put him at No. 1, Baseball Prospectus put him at No. 5, and a host of others ranked him similarly. All publications praised his rare, top-notch, seemingly effortless power. As with the projection systems, a consensus quickly developed, and that consensus proclaimed Bryant the best prospect in baseball.

The highest-rated prospects of the past 25 years have tended to become great major leaguers — on average. Yet there are some notable busts, players who the scouts thought were destined for greatness but who ended up falling short. Orioles outfielder Delmon Young, for example, consistently rated among the best prospects in baseball four years in a row, only to turn in a disappointing, journeyman career. Projection systems aren’t immune to mistakes, either. Once upon a time, Eduardo Nunez was PECOTA’s favorite, but he’s since become better-known for hitting a preponderance of popups. There’s no foolproof way to tell how a player will develop or respond to the challenges of the major leagues.

Independently, then, each source has its share of errors. Often, the scouts will disagree with the predictions, or vice versa. Scouts might see future potential that never manifests in the majors. Or PECOTA will fail to consider a player’s unfixable weakness against major league competition.

But Bryant has the approval of both stats and scouts, which is why he’s so special. Using data on historical prospect rankings2 and PECOTA projections going back to 2004, I looked for players who received comparable acclaim from both PECOTA and the scouts. Here is a complete list of the players in my data set who received a consensus prospect ranking better than fifth and a PECOTA-projected OPS greater than the projected league average. 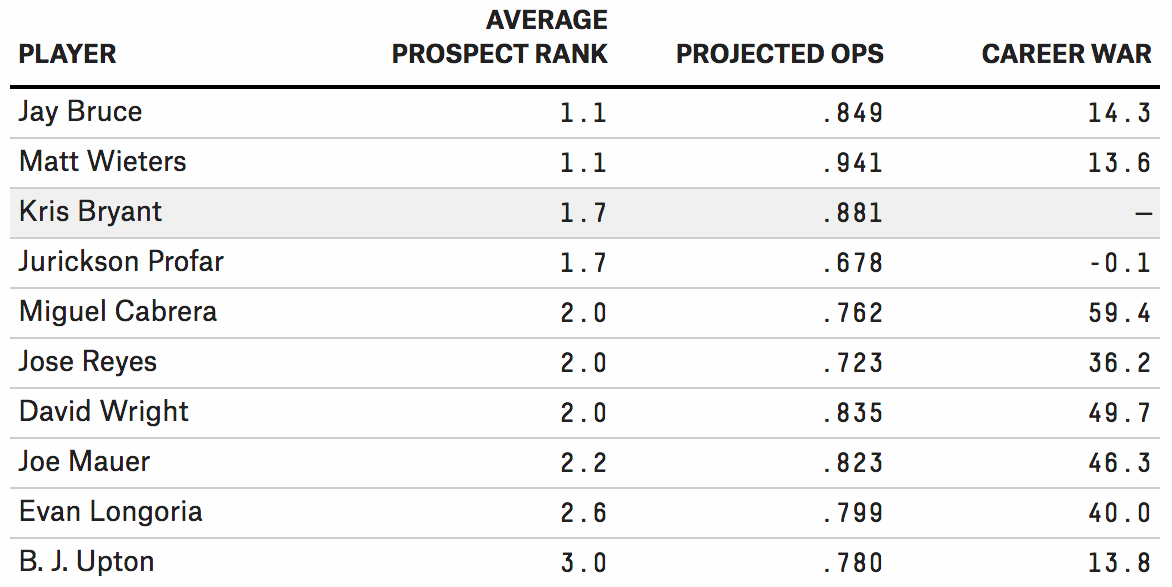 The names on this list combine for three MVP awards, 34 All-Star appearances and 273.2 wins above replacement3 (a statistic that measures the overall value of a player, combining his hitting, baserunning and defense). Bryant’s predicted OPS, relative to the league average, is higher than the comparable projections for all the players on the list before they entered the league.

Several of the above players are potential Hall of Famers (Miguel Cabrera, David Wright, Joe Mauer), while others have been merely very good (Jose Reyes, Jay Bruce). Notably, there’s not a true bust among them. Melvin Upton (formerly B. J.) isn’t a good hitter anymore, but he was excellent for the first six years of his career (just less than the seven years for which the Cubs will control Bryant).

A few of these players (such as Profar and Wieters) have fallen victim to injuries. This is the kind of problem that can end the career of any young player, no matter how bright his future might be. But Bryant has yet to suffer any serious injuries, whether in the minors or in college before that.4 To the extent that players can be injury prone, Bryant has so far shown no such inclination.

Bryant has won the acclaim of both the projections and the scouts. Rarely are the two in such resounding agreement. He is likely to be great, and while it may be too soon to be planning a parade, it’s not too early to begin envisioning a long period of Cubs offensive dominance led by Kris Bryant.