The effects of Hurricane Sandy on next Tuesday’s election are hard to predict. But the storm is likely to have an impact on the volume of polling in the meantime.

Three of the eight national tracking polls — those from Gallup, Investors’ Business Daily and Public Policy Polling — have announced temporary suspensions in their polling. Further delays and cancellations are likely over the next few days, especially in the Northeastern states.

Still, we were not completely without polls on Monday. 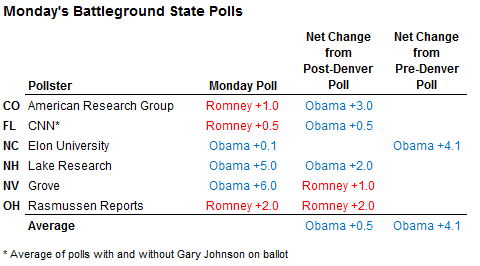 President Obama had a mediocre day of polling in the battleground states. In particular, a Rasmussen Reports poll of Ohio showed him trailing Mitt Romney there by two percentage points. It was the first poll to show to him down in Ohio since a poll by a Rasmussen Reports affiliate, Pulse Opinion Research, on Oct. 15.

Is this the sign of a shift toward Mr. Romney in Ohio?

It’s probably premature to conclude that on the basis of this poll alone. With so many polling firms active in Ohio, any sustained trend toward Mr. Romney in the polls there should be reasonably apparent by late this week, although there may be some delays in the interim. (The storm’s reach was broad enough to produce power outages in the Cleveland area, as well as in parts of southeastern Ohio.) Mr. Obama’s projected lead in Ohio decreased to 2.1 percentage points from 2.2 points on the basis of the Rasmussen survey.

In Florida, a CNN poll had Mr. Romney up by one point against Mr. Obama , or tied with him when third-party candidates were included on the ballot. Another CNN survey, earlier this month, had also shown Mr. Romney one point ahead in Florida. The poll is consistent with how the FiveThirtyEight projection views Florida, with Mr. Romney ahead by 1.2 percentage points in our forecast there.

An American Research Group poll of Colorado had Mr. Obama one point behind there, although that reflects an improvement for him from their prior poll of the state, when Mr. Obama trailed by four points.

Mr. Obama got reasonably favorable numbers in polls of New Hampshire and Nevada, although both were from Democratic-leaning firms and so did not affect our forecast much.

Arguably Mr. Obama’s best poll of the day, instead, was an Elon University survey of North Carolina, which had a tied race there. But North Carolina may be far enough way from the electoral tipping point that it is unlikely to figure all that prominently in next Tuesday’s math. Mr. Obama could win North Carolina — the forecast model gives him about a 20 percent chance of doing so — but most of those outcomes involve cases in which Mr. Obama will already have secured enough electoral votes in states like Virginia to have clinched another term.

National polls out on Monday, including some of the tracking polls that released a last set of results prior to suspending their polls, showed a tied race, on average. 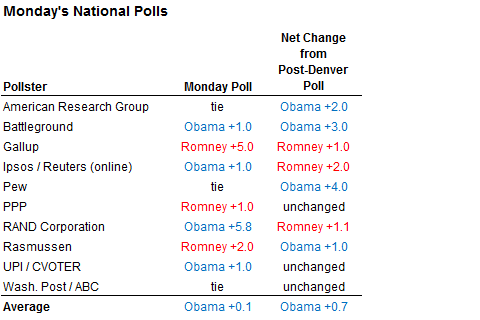 On the surface, these numbers look reasonably favorable for Mr. Obama, since he made gains on average (by 0.7 percentage points) from the previous edition of the same surveys.

A poll by Pew Research, for example, had a tied race — a better result for Mr. Obama than their last national poll, which had him trailing Mr. Romney by four points instead.

The FiveThirtyEight model views the Pew poll somewhat negatively for Mr. Obama, however. The reason is that, although a comparison of the trend against the most immediate prior release of the poll is important, the model also evaluates each survey in the context of all other polls that the firm has released over the course of the year. Pew Research had shown very strong results for Mr. Obama earlier in the year — for example, it had him up eight points among likely voters in a survey they conducted after the Democratic convention in September, so a tie there is still a middling result for Mr. Obama by comparison.

Mr. Obama’s position declined slightly in the forecast on Monday, with his chances of winning the Electoral College decreasing to 72.9 percent from 74.6 percent on Sunday, and Mr. Romney’s increasing to 27.1 percent from 25.4 percent.

Storm’s Effect on the Popular Vote

On Monday, I mentioned the possibility that Hurricane Sandy could increase the chance of an split between the Electoral College and the popular vote, on the theory that it might reduce turnout in the blue-leaning states of the Northeast.

After running some numbers on this, I am less convinced that the storm is all that likely to induce such a split.

The FiveThirtyEight forecast of the popular vote is based on adding up the projected results in each state, and then weighing them based on their projected turnout. (Turnout estimates are based on the state’s turnout in 2008 and 2010 and its population growth over the past four years.)

As of Monday, this projection showed Mr. Obama ahead in the popular vote by 1.5 percentage points nationwide. (Why does this result differ from what national polls seem to say? That’s a great question, and one we have addressed previously: there are systemic differences between the way that state polls and national polls seem to be perceiving the race this year.)

How would the projection change if turnout were reduced by 10 percent in Connecticut, Delaware, Maryland, New Jersey and New York?

Mr. Obama’s projected margin in the popular vote would decline to 1.2 or 1.3 percentage points, meaning a shift against him of only 0.2 or 0.3 percentage points. Instead of having a 6 percent chance of winning the Electoral College while losing the popular vote, as the default version of the FiveThirtyEight model gives him, those chances would increase to about 8 percent.

This is, of course, a fairly crude assessment: a fuller one would require a consideration of exactly which counties were affected, and whether they were Democratic or Republican leaning. It might also need to consider the effects of inland flooding and blizzards on states beyond the coasts, for example, in West Virginia.

But the United States is a big and resilient country; a disaster in one part of it may have a surprisingly small impact when viewed in terms of its entire economy, or its entire population.

Nor do I necessarily think that it
can be taken for granted that the storm will reduce turnout all that much, even in the worst-affected regions. Although the storm’s after-effects may make it physically harder for some people to vote, disasters can also increase civic-mindedness and patriotism, attitudes that make voting more likely.