Thursday was a busy day for the polls, with some bright spots for each candidate. But it made clear that Barack Obama maintains a narrow lead in the polling averages in states that would get him to 270 electoral votes. Mr. Obama also remains roughly tied in the polls in two other states, Colorado and Virginia, that could serve as second lines of defense for him if he were to lose a state like Ohio.

The day featured the release of 10 national polls, but there was little in the way of a consistent pattern in them. On average, the polls showed a tied race. Furthermore, among the nine polls that provided for a comparison to another poll conducted after the first presidential debate in Denver, the net result was unchanged, on average, with Mr. Obama gaining one percentage point or more in three polls, but Mr. Romney doing so in three others. 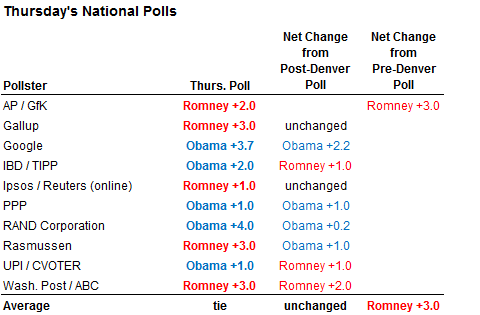 Mr. Obama held the lead in nine polls of battleground states on Thursday, as compared to three leads for Mr. Romney and two polls showing a tied race. 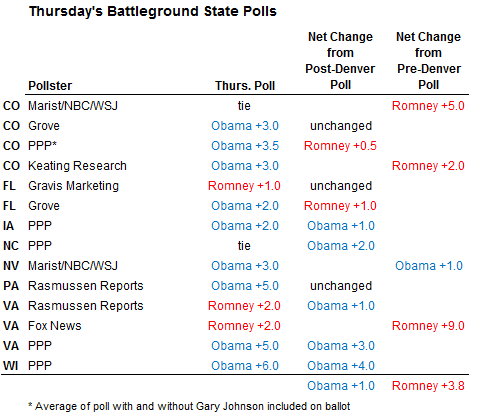 This tally exaggerates the lopsidedness of the polling a bit, since the state polls released on Thursday were something of a Democratic-leaning bunch, some of which had shown strong numbers for Mr. Obama previously.

Mr. Romney’s strongest number came in a Fox News poll of Virginia, which had him 2 points ahead there – a sharp reversal from a 7-point advantage there for Mr. Obama before the Denver debate. However, Mr. Romney’s worst poll of the day was probably also in Virginia, where Public Policy Polling showed Mr. Obama’s lead expanding to 5 points from 2.

Among the 10 polls that provided for a comparison to another poll conducted after the Denver debate, Mr. Obama gained 1 percentage point, on average. The past week of polling suggests that Mr. Romney is no longer improving his position in the race.

Whether Mr. Obama has any momentum of his own, such as because of this week’s debate in Florida, is less clear. To me, it looks more like a gradual reversion to the mean than anything all that assertive.

At the same time, Mr. Obama has led in the polling averages all year in states that would allow him to win the Electoral College, and that remains the case now.

In the chart below, I’ve summarized the current FiveThirtyEight forecasts in a rather comprehensive list of states in which each candidate has at least a 1 percent chance of winning, according to the forecast. The chart also lists the most likely range of popular vote outcomes in each state, enough to cover 90 percent of all possible outcomes.

There is more uncertainty about the outcome in some states – not just because some are closer than others, but also because of a number of other factors that the FiveThirtyEight forecast accounts for in formulating its probabilistic estimates of the potential range of outcomes in each state.

Our research suggests, as intuition might dictate, that the outcome in a state is more certain when there is a higher volume of recent polling there.

In addition, the outcome is more certain when the polls are more consistent with one another. If a candidate leads by almost exactly four points in every poll of a state, that is a more reliable advantage than in a case where some polls have the candidate up by eight points, but others show a tied race – even if these disparate polls show a 4-point lead for him on average.

Finally, some states are more “elastic” than others, meaning that they contain more swing voters. New Hampshire, for instance, is notorious for unreliable polling and for voters making up their mind at the last minute. This is probably not just a coincidence; New Hampshire has a disproportionate number of independent voters, and their preferences are more fickle than those of strong partisans. Thus, holding a small lead in the polling average in New Hampshire will not translate into victory as reliably as in another state like Pennsylvania, which has fewer swing voters and where elections are usually come down to a contest to turn out the respective party bases. The FiveThirtyEight forecast accounts for these properties.

These details aside, it is possible to place the states in to several broad groups. 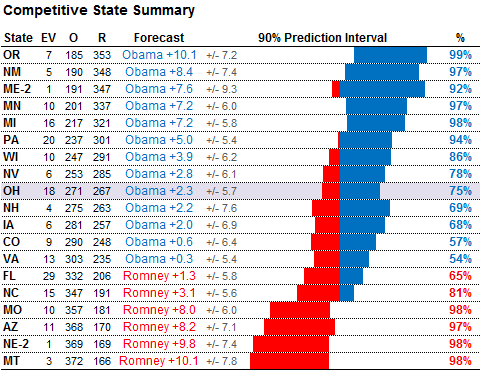 First come a set of blue-leaning states – Oregon, New Mexico, Minnesota and Michigan – which might theoretically have been competitive but where the campaigns have not spent very many resources. There is little reason, at this point, to expect them to play much of a role in the math on Election Night. If Mr. Romney wins them, or comes within a point or two of doing so, it will probably indicate that he is overperforming his polls across the board and is headed to a clear national victory.

Pennsylvania is somewhat more competitive, but Mr. Obama leads there by about 5 points in the forecast (that was also his margin in a Rasmussen Reports poll of the state on Thursday). With the exception of one strongly G.O.P.-leaning firm, Susquehanna Research, no other polling firm has shown Mr. Romney ahead in the state all year. A 5-point lead in the state with a week and a half to go should translate into a victory for Mr. Obama more than 90 percent of the time, especially in a low-elasticity state like Pennsylvania.

Wisconsin and Nevada come next. While both remain winnable for Mr. Romney, they have featured among the more consistent polling; Mr. Romney has led in just one poll of Nevada since the Denver debate, and none in Wisconsin.

If Mr. Obama wins Wisconsin and Nevada along with the states like Michigan where he seems to have a clearer advantage, he will have 253 electoral votes, putting him 17 votes shy of clinching an Electoral College majority.

Ohio, which has 18 electoral votes, is the state most likely to provide those votes to Mr. Obama. He leads in the FiveThirtyEight forecast by 2.3 percentage points in Ohio, and by a similar margin according to other Web sites that aggregate polls. The forecast gives Mr. Obama about a 75 percent chance of winning Ohio. This figure is, not coincidentally, close to Mr. Obama’s 73 percent overall chance of winning the Electoral College. (Ohio has about a 50-50 chance of providing the decisive Electoral College votes.)

New Hampshire and Iowa have featured less consistent polling than Wisconsin, Nevada or Ohio, and both are high-elasticity states that provide less overall predictability. Mr. Obama has about a two-in-three chance of winning each one, according to the
forecast. However, these states alone would not suffice for Mr. Romney to win the Electoral College if he also lost Ohio, Nevada and Wisconsin.

Colorado and Virginia appear as though they might be the closest states in an election held today. Mr. Obama arguably has just the slightest edge in Colorado, where three of four polls released on Thursday showed him ahead, and where a fourth showed a tied race – but those polls were a Democratic-leaning group, so it is probably best to view the state as a tossup. The outcome in Virginia, where the polling has been inconsistent all year and was so again on Thursday, is anybody’s guess.

However, the fact that Colorado and Virginia have been the closest states in the polling recently, and that both are fairly essential to Mr. Romney’s path to victory while being more superfluous for Mr. Obama, is evidence that Mr. Obama has an overall advantage in the Electoral College.

The forecast model continues to give a slight edge to Mr. Romney in Florida. There, in contrast to several other swing states, it has been the more methodologically reliable polls that have tended to show a clearer advantage for Mr. Romney. Florida is by no means a sure thing for Mr. Romney — Mr. Obama’s chances of winning it (35 percent) are larger than Mr. Romney’s chances of carrying Ohio (25 percent), according to the forecast. But the polls in Florida have historically done a good job of predicting the result, and it is unlikely to leapfrog several other states and be the Electoral College tipping point on Election Day.

All of this holds doubly for North Carolina, where Mr. Romney leads by about 3 percentage points in the forecast and has about an 80 percent chance of winning.

Beyond North Carolina, there aren’t very many states that Mr. Obama has a realistic chance to win, even if he is having a strong night overall on Nov. 6. Arizona probably provides Mr. Obama his best hope, but the forecast still puts his chances there at only about 3 percent.

It’s important to keep in mind that the potential errors in the polls between different states are partly correlated with one another. That is, if Mr. Romney overperforms his polls on Election Day in a state like Ohio, he is also somewhat more likely to do so in other states like Iowa, especially if they are demographically similar.

The FiveThirtyEight forecast accounts for this property in its overall assessment of the Electoral College, and it is one reason why our forecast gives Mr. Romney slightly better Electoral College chances than other forecast models that might assume more independence in the state polling. However, we may be approaching the point where the state polls will have to be systematically biased toward Mr. Obama in order for Mr. Romney to have strong chances of prevailing on Election Day.