The supposition that Ohio is the most important state in presidential elections is not always true. The decisive state in the 2000 election, of course, was Florida. (Al Gore also could have won by carrying New Hampshire or Missouri, both of which were slightly closer than Ohio that year.)

In 2008, Barack Obama won by a clear national margin, so the Electoral College did not really come into play. But had he suffered a sudden decline at the end of the race, Colorado or Iowa — not Ohio — would have been the decisive state (or what we call the tipping-point state in FiveThirtyEight parlance).

But this year, all the clichés about Ohio are true. In our most recent simulations, Ohio has provided the decisive vote in the Electoral College about 50 percent of the time.

We will return to the Buckeye State in a moment. Let me first give you a whirlwind tour of the three dozen polls released on Monday. I am going to be somewhat more circumspect than usual because what we will mostly be watching for the next few days is whether Monday night’s debate had any effect on the race — something that polls before the debate won’t tell us.

How close is the race according to national polls?

There were a remarkable number of them, 15, released on Monday. Pretty much every pollster with a pulse weighed in. (Unnecessarily meticulous note: I am excluding one case of a poll that was published on Monday but which conducted its interviewing back in September.)

Seven of the polls showed President Obama ahead, six had Mitt Romney ahead and two showed the race tied. 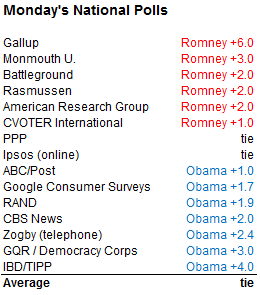 If you average the 15 polls, they show a tie, exactly. Neither candidate had an edge, even in the second decimal place.

There is a debatable case that Mr. Obama’s national polls are a pinch stronger than a week or so ago, when there was a period of a few days when they seemed to suggest that Mr. Obama was trailing by perhaps one percentage point.

We do show just a tiny bit of improvement for Mr. Obama, however. In our “now-cast” — our estimate of what would happen in an election held today — Mr. Obama’s advantage in the popular vote is now taken to be 1.2 percentage points, up from a low of 0.3 point on Oct. 12.

Mr. Obama also seems to be holding onto thin leads in the polling averages in the states that are most essential to his path forward in the Electoral College.

Two polls of Wisconsin published on Monday, for example, gave him leads of 3 and 5 percentage points.

There were four polls published of Pennsylvania on Monday, showing Mr. Obama ahead by margins varying from 3 percentage points to 10. Our forecast model comes in toward the lower end of that range, showing a lead there of about 4.5 points for Mr. Obama right now.

A quick word about Pennsylvania: the FiveThirtyEight forecast model has liked it for a long while as a high-upside play for Mr. Romney, since winning it would devastate Mr. Obama’s electoral map and since Mr. Romney has relatively few other opportunities to play offense. Pennsylvania is almost certainly a more plausible win than Minnesota or Michigan, for instance.

But as Monday’s polls ought to attest, it is also a high-risk play — Mr. Romney has only about a 7 percent chance of winning Pennsylvania, in our estimation. Any state that Mr. Romney is trailing in by 4 or 5 percentage points at a time when he is tied in national polls is not essential to the electoral calculus. It might be a worthwhile luxury expenditure given Mr. Romney’s flush cash situation, but it is probably not more than that.

Mr. Romney got a stronger poll in Iowa on Monday, where a survey from Rasmussen Reports showed a tied race there. That is down from a two-percentage-point lead for Mr. Obama in Rasmussen’s prior poll of the state.

There was also a poll published by Pulse Opinion Research, the parent of Rasmussen Reports, in Ohio on Monday, and that one had Mr. Romney up by one percentage point. This is a slightly unusual case, however, as we classify Rasmussen Reports and Pulse Opinion Research polls together for purposes of the model since it is essentially the same poll conducted under different brand names. Rasmussen Reports itself published an Ohio poll late last week that showed Mr. Obama up by one percentage point instead. The Rasmussen-branded poll is actually the more recent of the two (despite having been published earlier) and so receives more weight in our forecast.

These details would not be worth writing about in any other state — but Ohio is Ohio, and whoever wins it is extremely likely to win the election.

We are now running about 40,000 Electoral College simulations each day. In the simulations that we ran on Monday, the candidate who won Ohio won the election roughly 38,000 times, or in about 95 percent of the cases. (Mr. Romney won in about 1,400 simulations despite losing Ohio, while Mr. Obama did so roughly 550 times.)

Whether you call Ohio a “must-win” is a matter of semantics, but its essential role in the Electoral College should not be hard to grasp.

Were he to lose Ohio, Mr. Romney would have a number of undesirable, although not impossible, options.

The most favorable path, in the view of the model, would be for Mr. Romney to carry both Iowa and Nevada.

Of the two states, Iowa is the easier get. The polls there show a split between ties and leads for Mr. Obama, as opposed to Nevada, where they are mainly split between smaller leads for Mr. Obama and larger ones. In addition, in Nevada, Democrats have a significant voter-registration advantage and are building a large lead in early voting; the polls there have also tended to underestimate Democratic performance in recent years.

But Mr. Romney does not get to pick and choose if he loses Ohio; he would need to win both Iowa and Nevada under this plan. Furthermore, he would need to win New Hampshire to avert a 269-269 tie, where the polls have been inconsistent at best, but seem to show Mr. Obama slightly ahead, on average. On top of all that, he would need to win both Colorado and Virginia. The race is so close in both states that the model has fluctuated between showing them as blue states and red states with almost every new poll that comes in.

The major alternative would be for Mr. Romney to win Wisconsin, which would allow him to lose both Iowa and Nevada (although not Colorado or Virginia). But Republicans have had a number of seemingly favorable periods in Wisconsin — after Democrats’ failed attempt to recall the state’s governor, Scott Walker, after Mr. Romney named Representative Paul D. Ryan of Wisconsin as his running mate, and during Mr. Romney’s overall surge in the polls recently — and have never quite pulled ahead in the average of polls there. Wisconsin is certainly a big factor in the election, but may also be the sort of state where Mr. Romney has a pretty easy path to 48 or 49 percent of the vote, and a hard one to 50 percent.

Or Mr. Romney could carry Pennsylvania, but this is less likely still, especially as Pennsylvania is highly demographically similar to Ohio but slightly more Democratic-leaning. In our simulations on Monday, Mr. Romney lost Pennsylvania 99.5 percent of the time when he also lost Ohio.

But if Ohio is almost a must-win for Mr. Romney, the same case could be argued for Mr. Obama. Were he to lose Ohio, Mr. Obama would then need to carry either Virginia or Colorado — along with holding Wisconsin, Iowa and Nevada.

Unlikely does not equal impossible, but Ohio is central enough in the electoral math that it now seems to matter as much as the other 49 states put together.

I am not sure whether I should be congratulating you or consoling you if you happen to be reading this in Toledo. 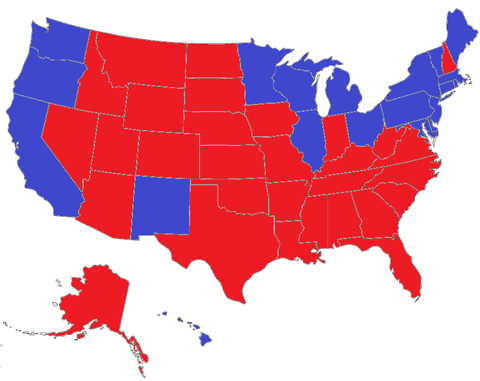 A version of this article appears in print on 10/24/2012, on page A15 of the NewYork edition with the headline: Maybe Not a ‘Must Win,’ But Ohio Is Surely a Vital Prize.