One of the risks in focusing too much on the results of any one poll, like the Gallup national tracking poll, is that you may lose sight of the bigger picture.

On Thursday, that story was one of President Obama continuing to hold leads in most polls of critical states. Of the 13 polls of swing states released on Thursday, Mr. Obama held leads in 11 of them. 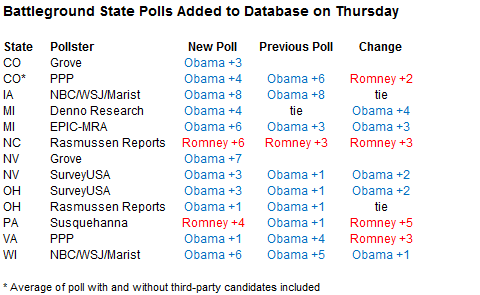 In contrast to most days since the first presidential debate in Denver, the state polls did not necessarily show a decline for Mr. Obama. As compared with the previous edition of the same survey, instead, he gained ground in five of the polls, and lost ground in four others. (Two of the polls showed an exactly unchanged margin, while two were published for the first time.) Some of the polls, like the SurveyUSA polls of Ohio and Nevada, show a slight uptick for Mr. Obama since the Denver debate; others, like the polls from NBC News, The Wall Street Journal and Marist College of Wisconsin and Iowa, show Mr. Obama’s standing holding even relative to his numbers before the debate.

The catch is that Susquehanna has long shown much better results for Mr. Romney in Pennsylvania than other polls of the state. The five-point swing toward Mr. Romney in the poll is not inconsistent with what the other polls show, but Mr. Romney started from a higher baseline in the Susquehanna poll, having been down just one point in a poll they conducted in late September.

Mr. Obama continues to hold a lead of about four points in the FiveThirtyEight average of Pennsylvania, which is where other polls show the race there. But it has re-emerged as a potentially important state in the electoral math, having now surpassed Florida on our list of tipping point states. What makes Pennsylvania a little different is that it is a relatively rare opportunity for Mr. Romney to play offense in the Electoral College, whereas Florida is more superfluous for Mr. Obama given that he has myriad other paths to get to 270 electoral votes.

The other swing state poll showing Mr. Romney ahead was in North Carolina, where a Rasmussen Reports poll gave him a six-point lead.

Mr. Romney has led in six consecutive polls of North Carolina, and the forecast model now gives him an 85 percent chance of winning it. We have been arguing for several months that the attention paid by the campaigns to North Carolina was misplaced, and that seems to be more emphatically clear now: The 15 percent of the time that Mr. Obama wins it in the model are mostly those cases where he’ll have had a strong enough night nationally to easily clear 270 electoral votes elsewhere.

Still, the volume of strong polls for Mr. Obama in other swing states carried the day. In particular, although the Marist poll is a modest outlier in Iowa, Mr. Obama seems to lead in the consensus of polls in both Nevada and Iowa by a wider margin than he does nationally.

Winning in either of those states — along with Wisconsin and Ohio, where the same is true — would suffice to give him 270 electoral votes barring a surprise elsewhere, as in Pennsylvania.

Mr. Obama may be benefiting from early voting in Iowa, where both polls and statistics on ballot requests suggest that he is well ahead among those who have voted so far.

There is also some suggestion in the data that the polls with the most recent field dates are slightly stronger for Mr. Obama than those that were conducted earlier in the week. An EPIC/MRA poll of Michigan, for instance, conducted entirely on Wednesday, showed him with a six-point lead there — up from three points in a survey the same firm had conducted earlier in October.

As of Thursday, there were not yet clear signs of a shift toward Mr. Obama in national polls — and certainly not in the Gallup national tracking poll, which has had Mr. Romney continuing to make gains and put him ahead by seven points among likely voters on Thursday.

Mr. Obama did draw into a tie, however, in Public Policy Polling’s most recent national poll, improving from a four-point deficit in a poll they conducted last weekend.

Online polls conducted by Google Consumer Surveys on Wednesday and Thursday, after this week’s presidential debate, also showed Mr. Obama with nominal leads of 2.2 and 0.6 points, reversing a modest advantage they had given to Mr. Romney before this Tuesday’s presidential debate.

Still, if the national polls tell a more equivocal tale than the Gallup poll alone would imply, it’s really in the state polls where Mr. Obama’s strength lies — as has largely been the case all year.

Mr. Obama’s chances of winning the Electoral College improved to 70.4 percent on Thursday from 65.7 percent on Wednesday, according to the forecast.